The Whisper of Roses

In an industry based on artifice, beauty trailblazer Sylvie Chantecaille proves the most radiant looks come from the most natural place—outside in the garden 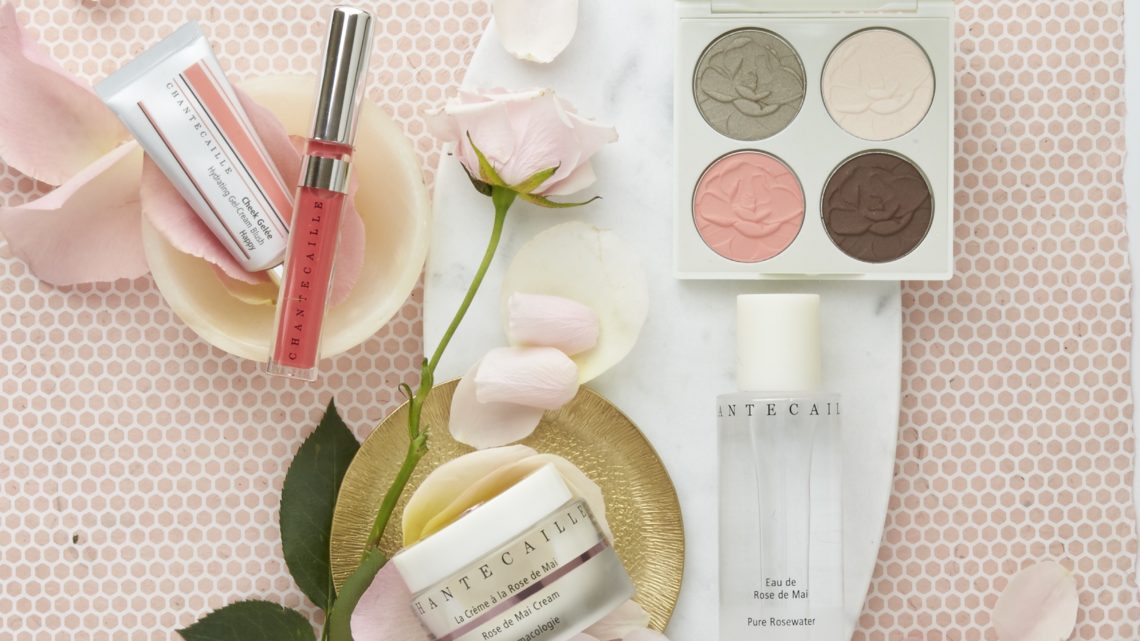 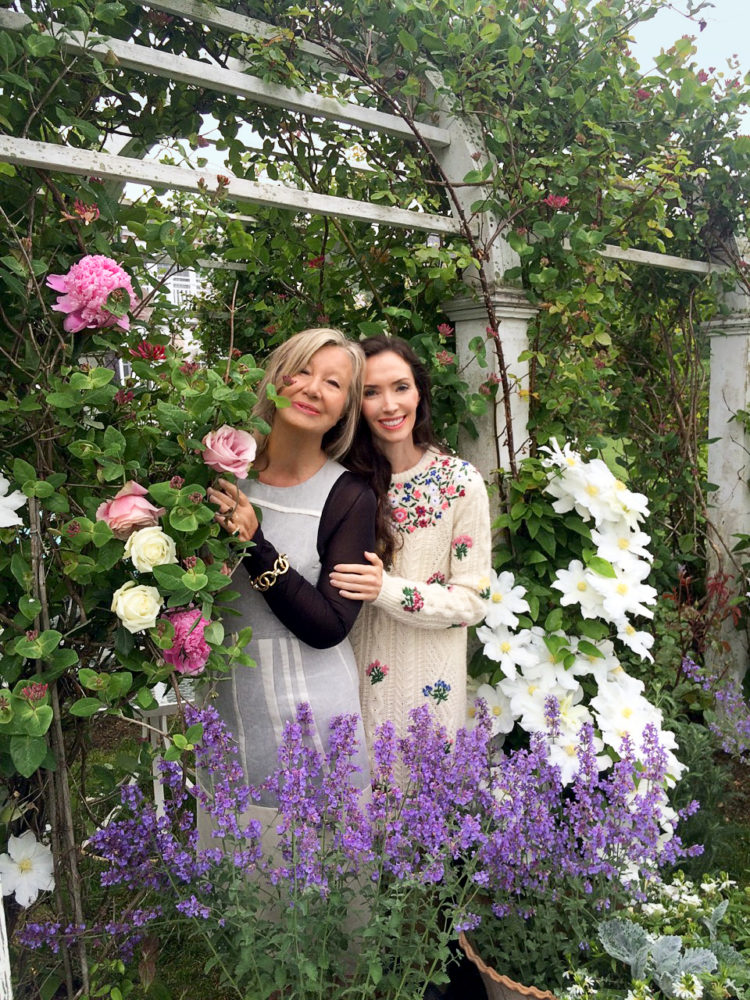 These days, the words “entrepreneur” and “start-up” can conjure images of Silicon Valley types in black turtlenecks or hooded sweatshirts pacing around a TED stage, but a study of French cosmetics maven Sylvie Chantecaille shows that powerful CEOs wear Christian Louboutins and gardenia-scented perfume too. During her four decades in the beauty business, Sylvie has successfully launched three companies and remained at the forefront of innovation and trends. That’s quite a run in an industry where fame can last about as long as a quick coat of lipstick.

An only child of aristocratic Parisian art collectors, Sylvie honed her eye for color and design on trips with her parents through Europe. “My parents were very interested in the Old Masters, so we spent a lot of time in Spain, Italy, and the Netherlands,” she says. “Everywhere we traveled, we went to museums and talked to artists. Your eye is very much educated. As a little girl, I could tell you that I didn’t like El Greco but I loved Rubens,” she laughs. 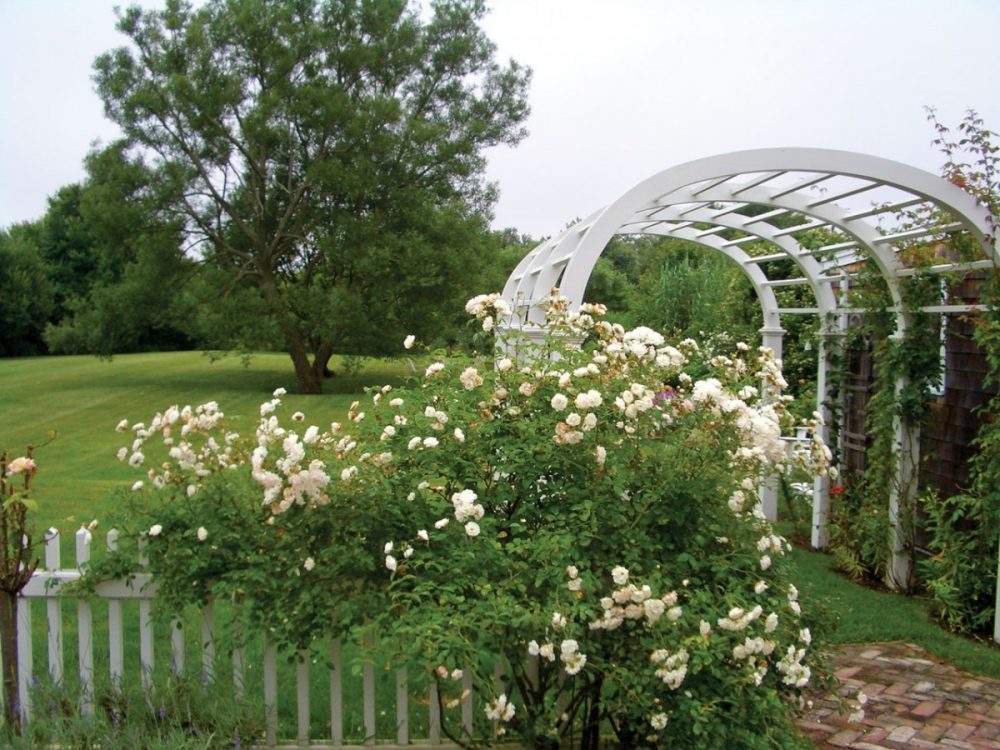 A rambling spray of roses runs along the gate at Sylvie’s Hamptons home.

Her mother was also an exuberant gardener. Sylvie’s memories of trailing after her mother in the garden of their French country home instilled an abiding love of flowers and an appreciation of their transformative power—values that would animate her professional career and passion for cultivating her own garden at her historic Hamptons home.

Her first foray into beauty came in 1977 at what most would call an inauspicious moment: Sylvie and her Bordeaux-born husband, Olivier, had just settled into a new home in New York, and she was pregnant with their first child. Yet when friend and designer Diane von Furstenburg approached her about teaming up for a beauty line, she was thrilled. “I have this energy,” says Sylvie, slightly bemused. “I like starting things from scratch.” 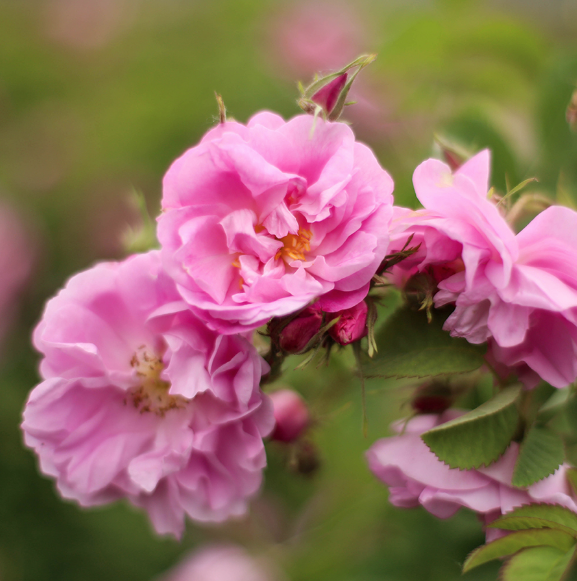 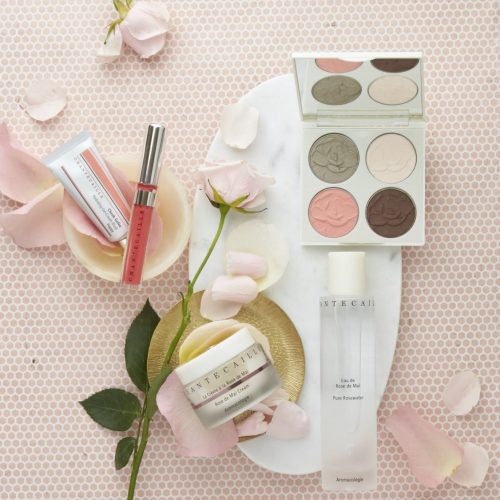 Her work for the Diane von Furstenburg line soon caught the eye of the Lauder family, who wooed her away in 1979 to launch Prescriptives, a groundbreaking brand from Estée Lauder dedicated to offering progressive and natural-looking products for all skin tones. It was a smashing success and retains a cult following 37 years later.

After two decades at the helm of Prescriptives, Sylvie again became restless. “I remember Ronald [Lauder] saying to me, ‘I know you want to start your own company,’” says Sylvie. “And I did. At the time I had three children, but running a business is in your blood, so you just do it.” She began work on her eponymous line at age 50. “It’s a crucial time in your life,” she says. “You take your power and do what you really should be doing.”

A longtime believer in the healing properties of flowers, Sylvie felt strongly that her products should be based in botanicals. On an early sourcing trip to Grasse, Provence, Sylvie stumbled upon a field of Rose de Mai, a rare pink rose that blooms for five-to-ten days in May. She was so taken with its scent and its veritable powers that she decided to make Rose de Mai rosewater the foundation of all the company’s skincare products. “The rose is an extraordinary plant on many levels,” Sylvie says, noting its anti-inflammatory, anti-aging properties, and high dose of vitamin C. “On a chemical level, it can help you sleep soundly and take away your headaches. On a spiritual level, it’s very high energy. Not only does it moisturize and make you feel great, but the rose gives you joy.” 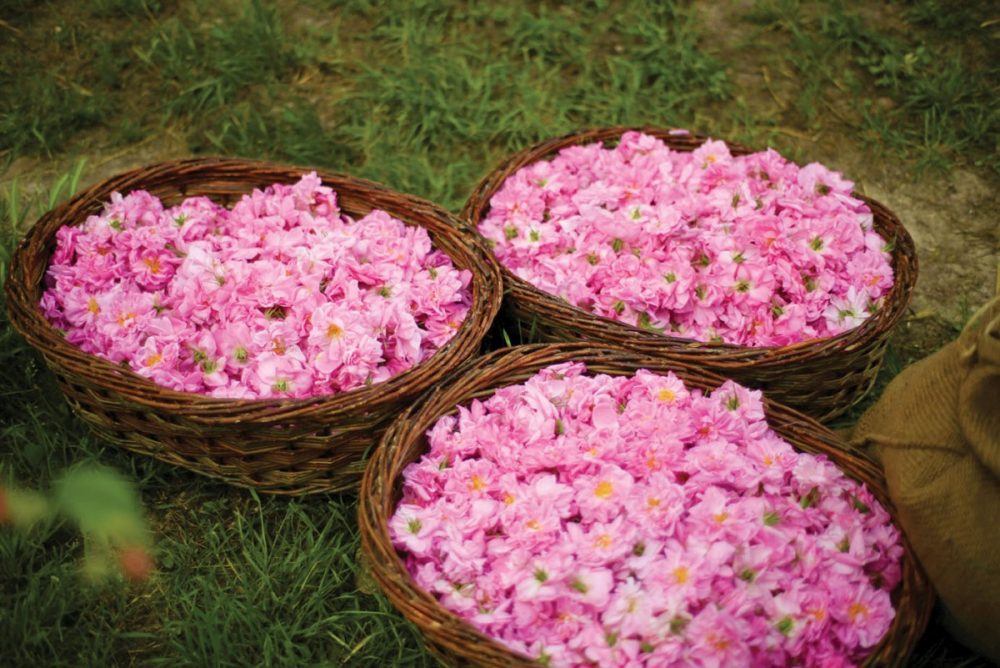 Rose de Mai in Grasse, Provence, blooms only a few days each year. 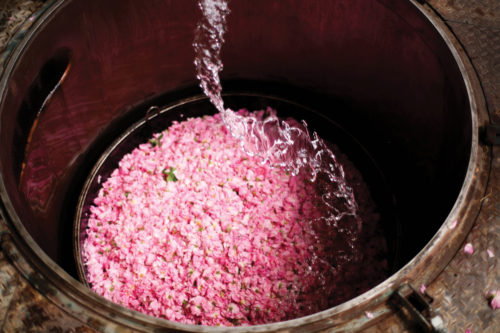 A batch of roses is pressed to make rosewater, the base of Chantecaille’s skincare line.

This concept of skincare not just affecting how a person looks, but how they feel resonates powerfully with Chantecaille’s customers. Eve Hirsch, a skincare expert at the Barneys flagship store on Madison Avenue attests to the allure. “Chantecaille products give you that inner/outer glow,” she says. “It’s an uplifting makeup brand. You can feel the plants and flowers working when you put on the product.”

Sylvie’s commitment to the environment extends far beyond the rose fields of Grasse or her garden in the Hamptons. Since the company’s inception, Sylvie has used Chantecaille as a platform for advancing environmental causes around the world. A new eye palette honors women in Africa protecting lions and elephants, with proceeds from sales going back to the women’s nonprofits. “We have the joy of using a lot of plants in our products, so we understand what’s going on in the environment,” says Sylvie. “For us the philanthropy is our pleasure; it’s what excites us.” 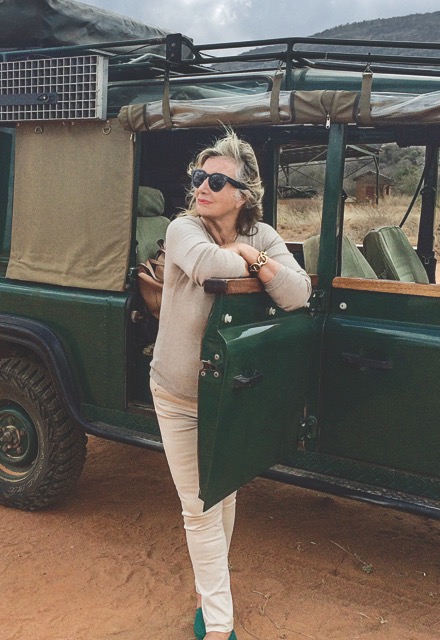 Sylvie takes many trips to Africa, her favorite place to travel. 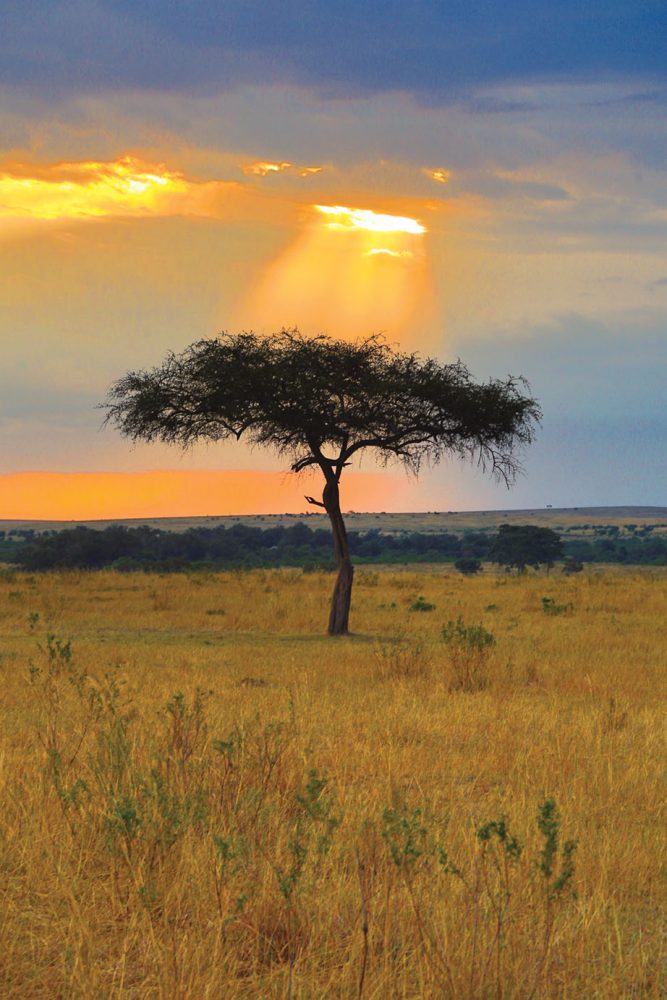 Sunlight breaks through the clouds on the savannah.

Chantecaille is a matriarchal enterprise, deeply reflective of its founder’s values and aesthetic and run by the Chantecaille family. Olivier handles the finances as CFO; and Sylvie’s children Olivia, Alex, and Philippe are creative director, sales vice president, and director of media productions, respectively. For Sylvie, working with her children is a delight. “You have these people that you happen to know so well, and at the same time you see them act in ways you haven’t seen before,” she says, betraying a mother’s pride.

For Alex, working with her mother is a chance to see a consummate professional up close. “My mom never stops,” says Alex. “She’s the person who leaves the office at 9:30 p.m. She’s very much that classic entrepreneur. She’s not afraid of failure. She believes in her long-term vision. I think that’s exciting—there’s no ‘We can’t do that.’”

“I have always had the feeling that there was something about the flower that I had to understand,” says Sylvie. “If you listen, there’s an awful lot they can tell you.” It’s a mystical, magical conversation that continues to bear fruit—in the savannahs of Africa, in a patch of garden in the Hamptons, and on women’s bathroom vanities around the world. 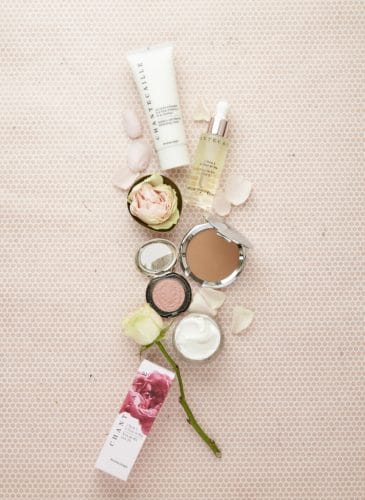