The powerhouse behind her interiors brand Designers Guild, British designer Tricia Guild looks to nature for her collections of fabrics and wallcoverings bursting with color and intrigue 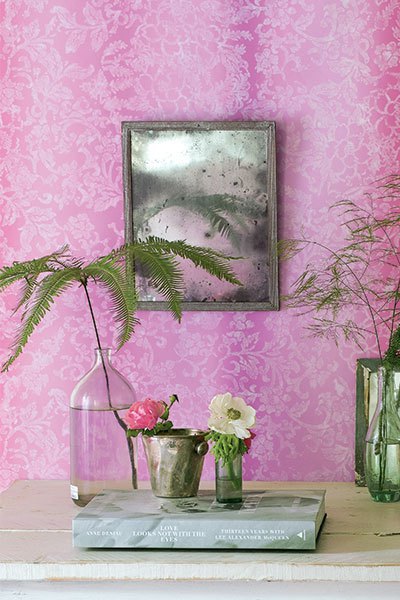 Stepping into the eye-catching Designers Guild shop on London’s King Road, flipping through fabric samples in one of their design center showrooms, or browsing their website, for that matter, is an experience of vivid color, cheerful contrasts, and a bounty of floral motifs. Fern fronds, roses, lilies, gardenias, and hydrangeas bloom on products as wide-ranging as fabrics and wallpapers to bath mats and tableware. Founded in 1970 by British designer Tricia Guild, the company never strays far from its focus on effusive, boldly colored designs. 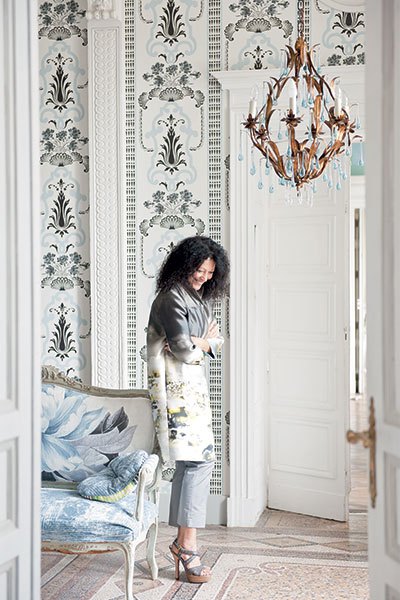 The perennially stylish Guild in a rare still moment, leans on a settee upholstered in an over scale rose print called Sofienberg. The Bergius wallpaper was influenced by 18th-century painted wall panels.

Floral prints are a staple in her 2014 collection, just as they were when Guild started designing several decades ago. “I use flowers and botanical themes in a huge variety of ways in my work,” says Guild. “I love to change the scale or set them off next to stripes or geometric checks, which gives them a more contemporary and tailored feel,” she says. “This season our collections are inspired by Japanese calligraphy and feature botanical studies of flowers and leaves.”

Flowers simply feed Guild’s imagination. “There is nothing more inspiring than nature itself. I never fail to find something that touches me or moves me within a garden,” she says. “The thousands of different shades of green, the promise of early spring buds to a full-blown summer display; it is one of life’s miracles.”

Guild’s love for flowers was a seed sown early in her development as an artist. “One of my earliest memories is of times spent gardening with my grandfather,” she says of her London childhood. “I had my own little patch within his garden where I would grow sweet peas and sometimes tomatoes in the greenhouse. I distinctly remember his beautiful wisteria and can remember the heady scent and delicate color.”

As a budding designer, she got degrees from the Royal College of Art, Winchester School of Art, and Loughborough University before striking out on her own. Along the way, she made time to raise her daughter and author numerous books on design, including several on flowers.

These days, she lives in Notting Hill with her husband, the restaurateur Richard Polo. In 2008, Guild was awarded the Order of the British Empire, OBE, for her services to interior design and launched the Royal Collection of British royal household fabrics and wall-coverings. Under the licensing agreement, Guild has been able to reproduce and interpret fabrics and wallpapers from Buckingham Palace and Windsor Castle, and has added rugs, tiebacks, and trimmings inspired by various royal rooms, including the private quarters of Queen Victoria and Prince Albert.

As always, Guild is hard at work on the next collection of fabrics and wallcoverings, as well as bed linens and cushions. The results are sure to be anything but predictable—except that a floral sensibility will surely emerge. “I don’t think I have ever done a collection without flowers or some form of leaf in them,” she says. “The impact of nature on the creative process is profound. Someone might find a strong lime green cushion difficult at first, but then when they consider that a bowl full of green apples is exactly the same color, they sort of give in to it and take the leap. Life without flowers would be very dull indeed.” 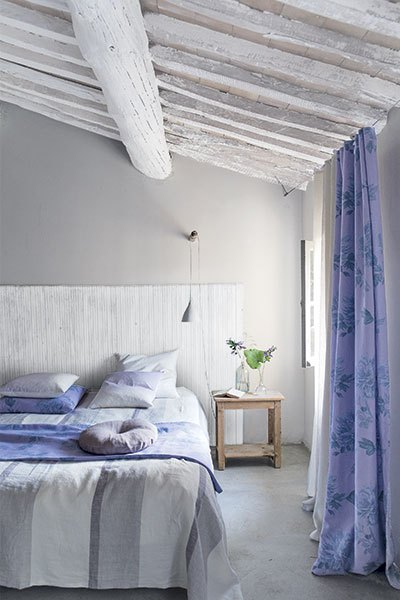 Guild’s philosophy has always been that flowers, both fresh or interpreted, are at home in any setting, whether traditional, rustic, or contemporary.