The Lure of Limoges

Hailing from a picturesque French town rich in a rare white clay, Limoges porcelain has been regarded for centuries as the finest on the market, drawing attention from royal families, First Ladies, Victorian housewives, and chic tastemakers the world over 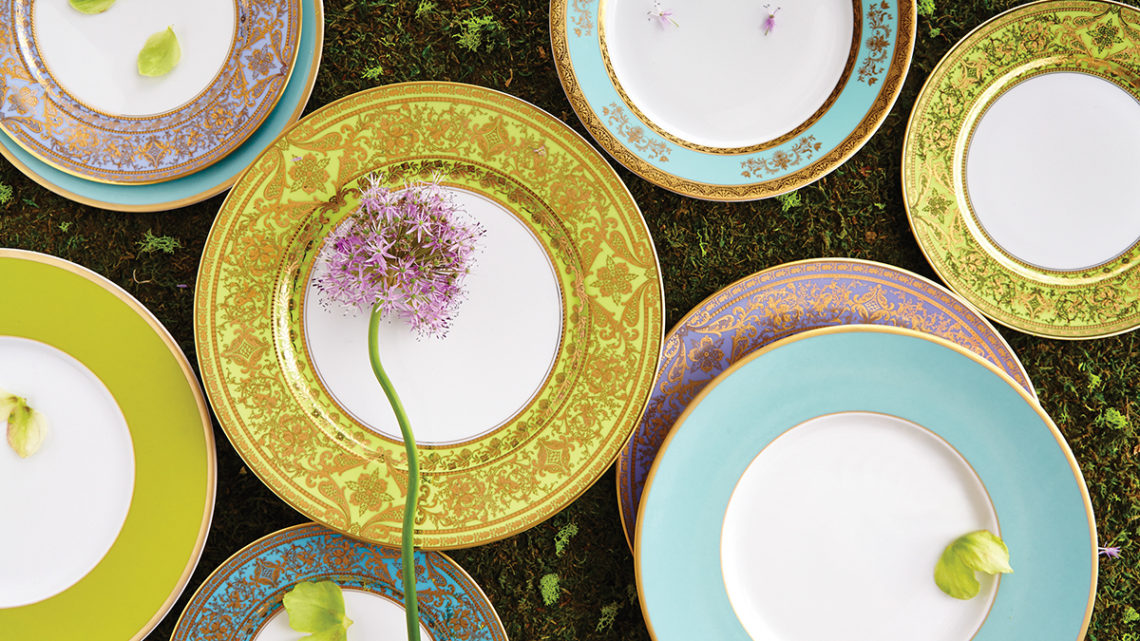 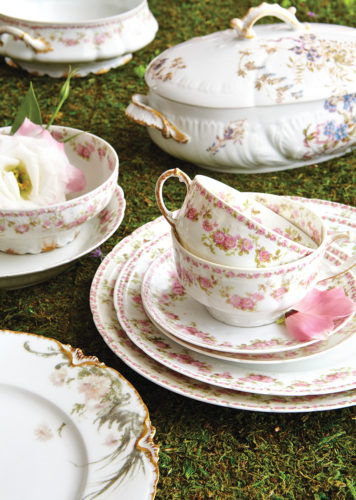 Of the three Limoges manufacturers represented in these antique floral pieces—Charles Field Haviland, Martial Redon, and Haviland— only Haviland is still in operation today.

Luminous limoges porcelains have created an aura of hauteur on best-dressed tables for hundreds of years. In the 1860s, glamorous Empress Eugénie rekindled Marie-Antoinette’s famous obsession with flowers when she commissioned an elaborate table service strewn with pink cabbage roses. After the demise of France’s Second Empire and the Bonapartes’ exile, the last empress found solace in a subsequent set festooned with gentle Parma violets. Today, the porcelains erroneously dubbed “Limoges china” are still a favorite choice of brides and trendsetting hostesses, inseparably entwined with the best of times.

Until the 1700s, the porcelains imported by the Western world came from China. In 1765 the discovery of rich deposits of a white clay called kaolin, near the hilltop town of Saint- Yrieix-la-Perche, France, created a thriving, new hard-paste industry in the Limousin region 250 miles southwest of Paris. Wood for the kilns came from nearby forests, and water from the sparkling Vienne River. By the mid-19th century, Limoges not only dominated French tableware production, but also was exporting 80 percent of its goods to the United States.

Now, most Limoges products are available worldwide. But  whether your own cupboard brims or begs for more, a trip to Limoges offers a tantalizing opportunity to shop at the source. About four hours by train from Paris, the medieval town of timbered buildings and arched, 13th-century pedestrian bridges rises out of a pastoral landscape of dun-colored fields and swaths of nodding sunfowers. Museums and factories decorated with enameled tiles speak of the porcelain that gave Limoges its identity, and myriad shops offer an array of the wares that have made the area famous. 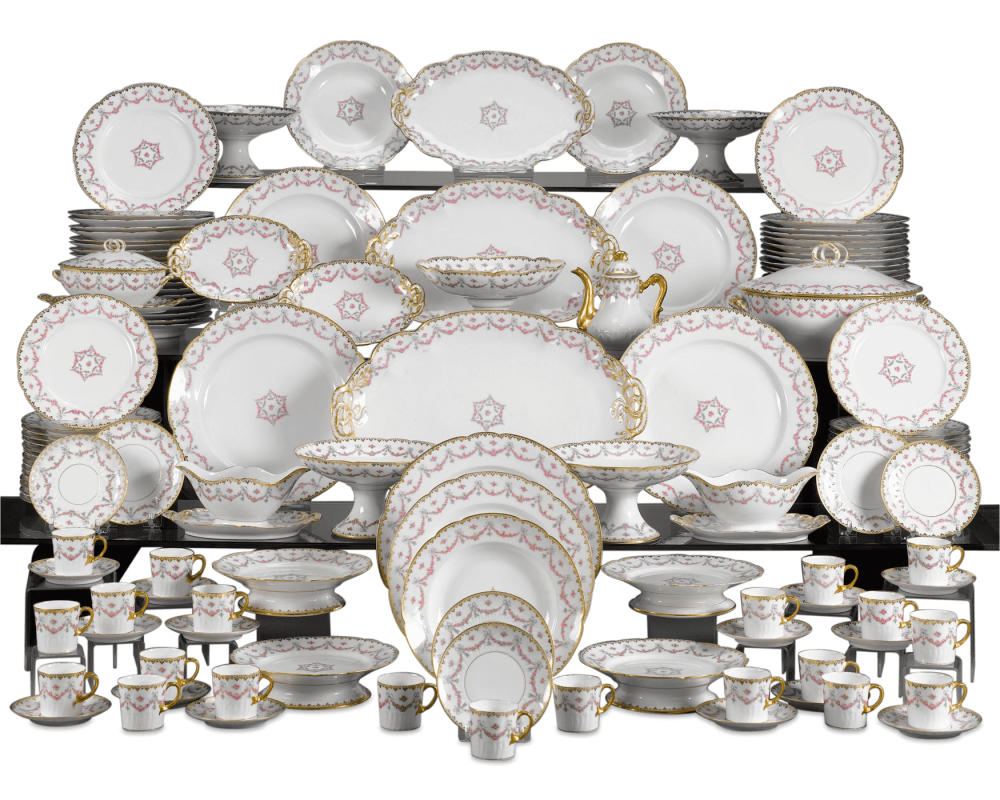 Delicate floral garlands and shimmering gilt accents distinguish this exceptional, 143-piece, circa 1920 Limoges porcelain dinner service. Crafted by Gerard, Dufraisseix & Abbot, one of the most respected makers of Limoges porcelain, this beautiful service exhibits the high caliber of artistry achieved by this world-renowned company. From the intricate hand-painted motif to the elegant scalloped edges, these pieces are truly stunning. Learn more about this  Limoges dinner service available at M.S. Rau Antiques, New Orleans.

New York dinnerware merchant David Haviland created his dynasty in 1842 on a journey to find a replacement for a broken teacup. Eventually the form cultivated a wealth of  high-profile commissions, including six sets for the White House. Mary Todd Lincoln chose a service featuring a bald eagle to signify America’s strength to foreign governments during challenging times at home, while Ulysses S. Grant’s wife, Julia, opted for a more traditional set that featured botanicals encircled by a yellow band and scalloped rim. But it was Victorian housewives rather than First Ladies who truly fueled the Haviland craze, which was documented in a 1910 Macy’s catalog that offered “Real Limoges French China 101-piece dinner set for $17.89.”

“Think of every plate as a still-life painting, creating romantic ambience and a stage for glorious food.” –Michel Bernardaud

Today both Haviland and Bernardaud’s factories offer visitors a peek into the production process that begins with a water-based paste of kaolin, feldspar, and quartz pressed into molds. After initial firing and enamel glazing, an intense firing (at 1,450 degrees) called the “Grand Feu” bestows the porcelain’s distinctive whiteness and unparalleled durability as well as resistance to scratching and dishwasher damage.

Initially, Limoges whiteware flaunted its undecorated translucency; then early decoration favored polychrome flowers and gold filaments. Floral patterns inspired by everything from botanical manuals and Japanese flower paintings to travel books and gardens decorate these pieces. Sometimes even real flowers were dipped in slip, fired in the kiln, and then applied to serving pieces or fashioned into centerpieces.

Later, highly skilled craftsmen collaborated with famous artists such as Pierre-Auguste Renoir, who was briefly a plate painter. Currently, decoration is done by chromolithography, or decals, which are pressed onto each piece, then fired. Pieces with 24-karat-gold accents are still painted; spouts and handles are attached and decorated by hand.

Although Limoges manufacturers have boasted famous patrons from every royal household and government, today they are just as likely to court partnerships with celebrity chefs and luxury hotels. And while many historical patterns remain as popular as they were in their time, using floral with graphic patterns, and mingling contrasting but compatible colors on the table is clearly the prevailing trend.

“In the past, mothers and grandmothers helped a bride choose traditional, matched settings,” says Philippe Deshoulières, sixth-generation member of the Deshoulières Group. “Today’s sophisticated hostesses own several different patterns and love mixing them creatively.” This is good news for flower devotees, who no longer have to choose between peonies and tulips, or lilacs and dogwoods. A stylish tabletop might feature Deshoulières’ banded presentation plates beneath refined floral dinner plates from Bernardaud, and Raynaud salad plates rimmed in delicate leaves. Dessert? Great-grandmother’s gold-incrusted antique plates with individual flowers.

“The spirit is to play with the table and have fun with it,” says Deshoulières. “Limoges collectors have limitless options to do just that.”

Limoges, France, only a few hours by train from Paris, is a medieval town peppered with 13th-century architecture such as this cathedral and pedestrian bridge over the Vienne River. | ©IStock/Lianem

In this 1917 photo of the Haviland factory, barrels of Limoges porcelain are ready for shipment. | © Paul Thompson/National Geographic Society/Corbis

With a tour through the old Royal Limoges factory, one can learn firsthand about porcelain production and the important role this firing kiln played in the process. | Photo courtesy of Barbara Walton

A towering presentation of porcelain is displayed at the Royal Limoges factory. | Photo courtesy of Royal Limoges

A Bernardaud artisan works with a small chisel to create the bubbly effect of the collection called Ecume, the French word for foam. | Photo courtesy of Bernardaud

This dinner plate is part of the 587-piece state porcelain service of President Ulysses S. Grant. The head of Haviland’s decorating department created flower drawings which were transferred to the porcelain through a combination of printing and hand-painting. | Photo courtesy of the Philadelphia Museum of Art, gift of the McNeil Americana Collection, 2006

Gold incrustation plates from Philippe Deshoulières and Haviland would make an alfresco luncheon fit for a queen.

Step Up Your Table Settings

The Ultimate Bike Basket: May Cabas