The Romance of Repoussé Silver

The ancient art of working with metal still captivates today, especially in the intricate floral designs as seen in silver flatware and other specialty pieces for the table and vanity

All types of silver, from flatware to service pieces, naturally speak to the Christmas season with all their shine and richness. Beloved collections, often handed down and pulled into service, fill our tables and our rooms. And perhaps the star of the holiday show is silver in the dramatic repoussé style with its surface almost completely covered with intricate flowers and other detailing. Repoussé from the French, meaning “pushed back,” refers to any type of ornamentation in which the design is raised in relief on the reverse or interior side of the metal material at hand. While smiths extensively practiced the technique throughout history, the word’s first known use appeared in the early 1800s as silversmiths in America thoroughly embraced the method. 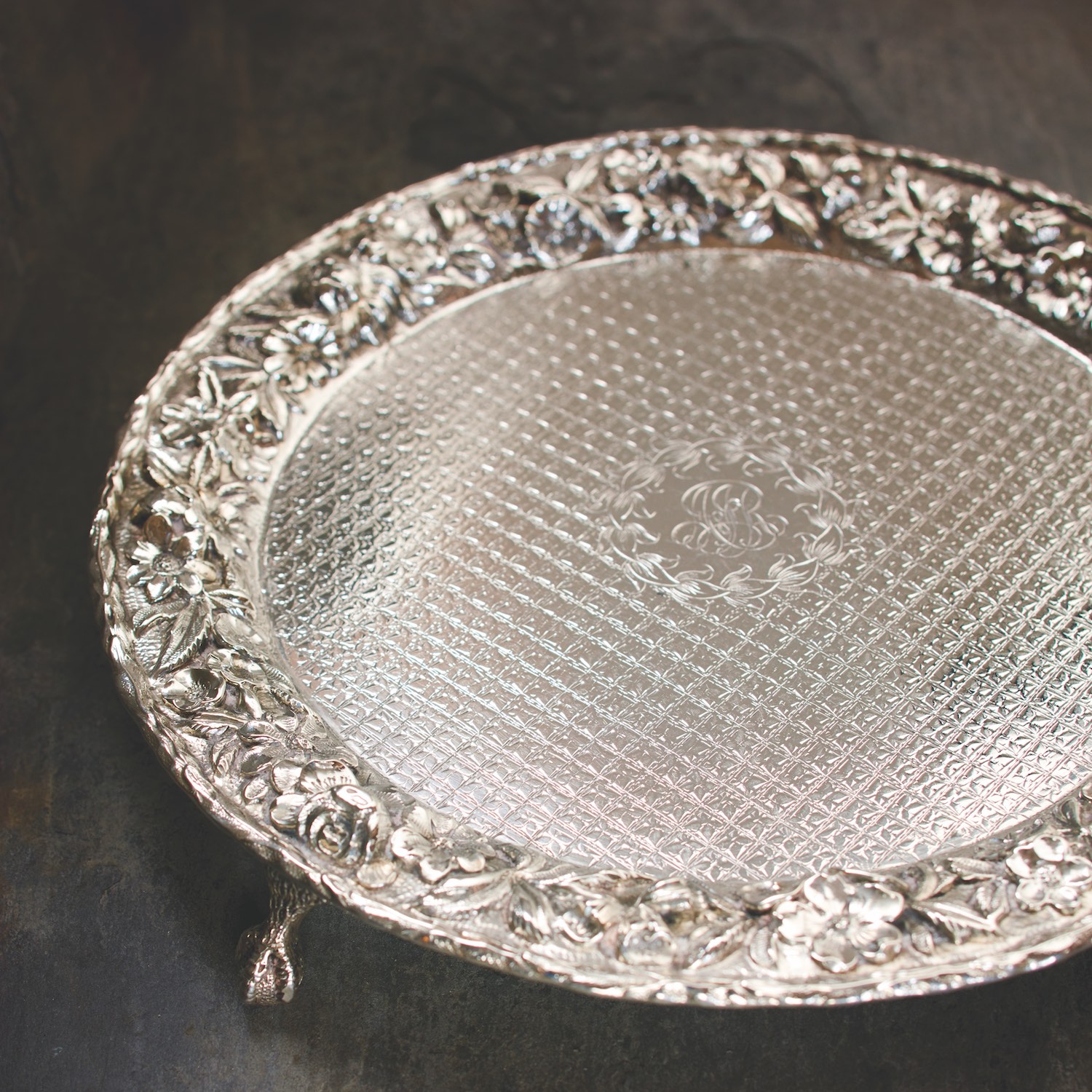 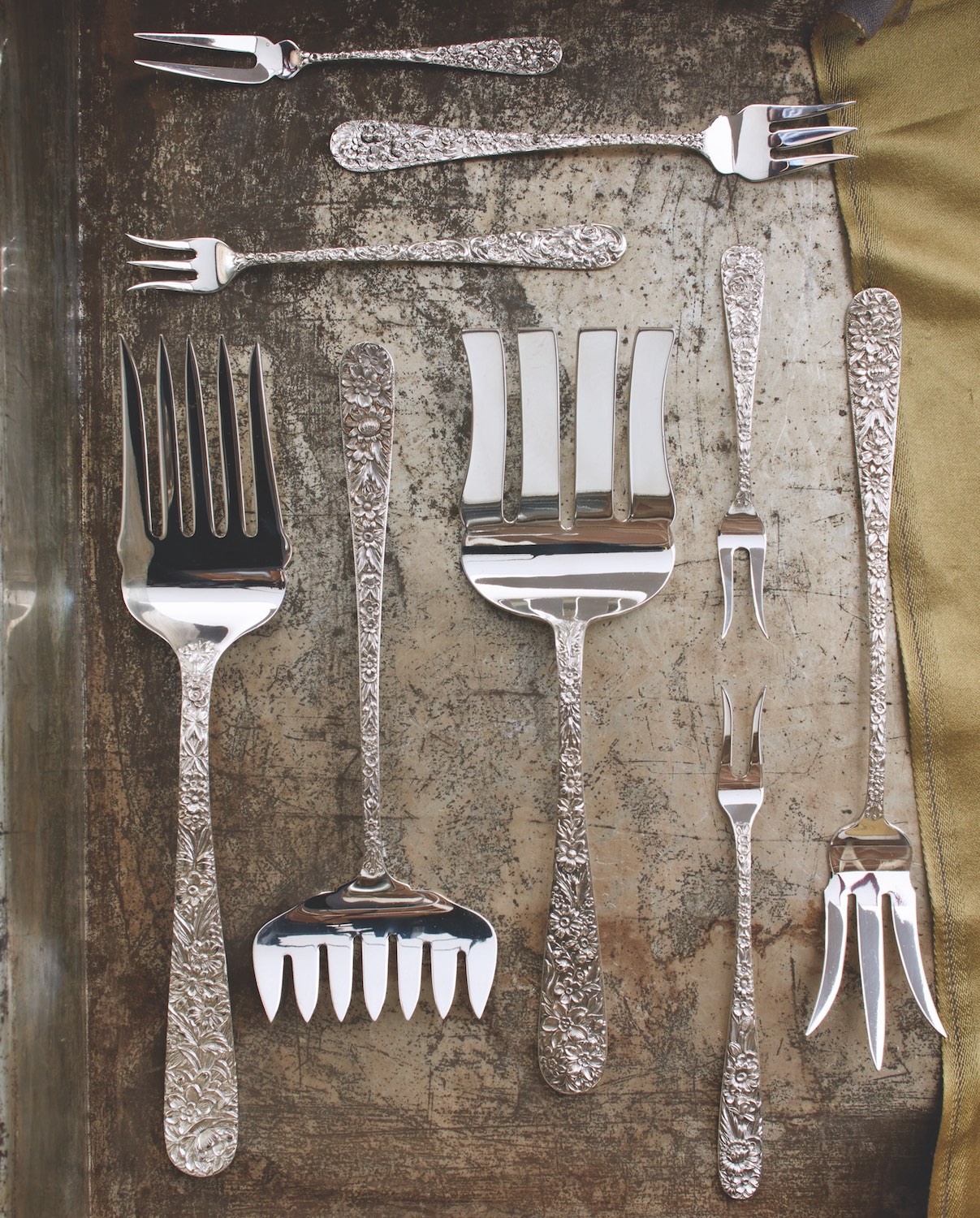 Victorians loved their silver, so repoussé manufacturers were quick to introduce pieces to meet every possible need at the table. Intimate knowledge of all the designs was a necessary social skill during that time. TOP ROW: Berry, pickle, and oyster forks. SECOND ROW, LEFT TO RIGHT: Cold meat, bacon, asparagus, large and medium lemon, and lettuce forks (all by Jenkins & Jenkins, S. Kirk & Son, and Kirk Stieff). 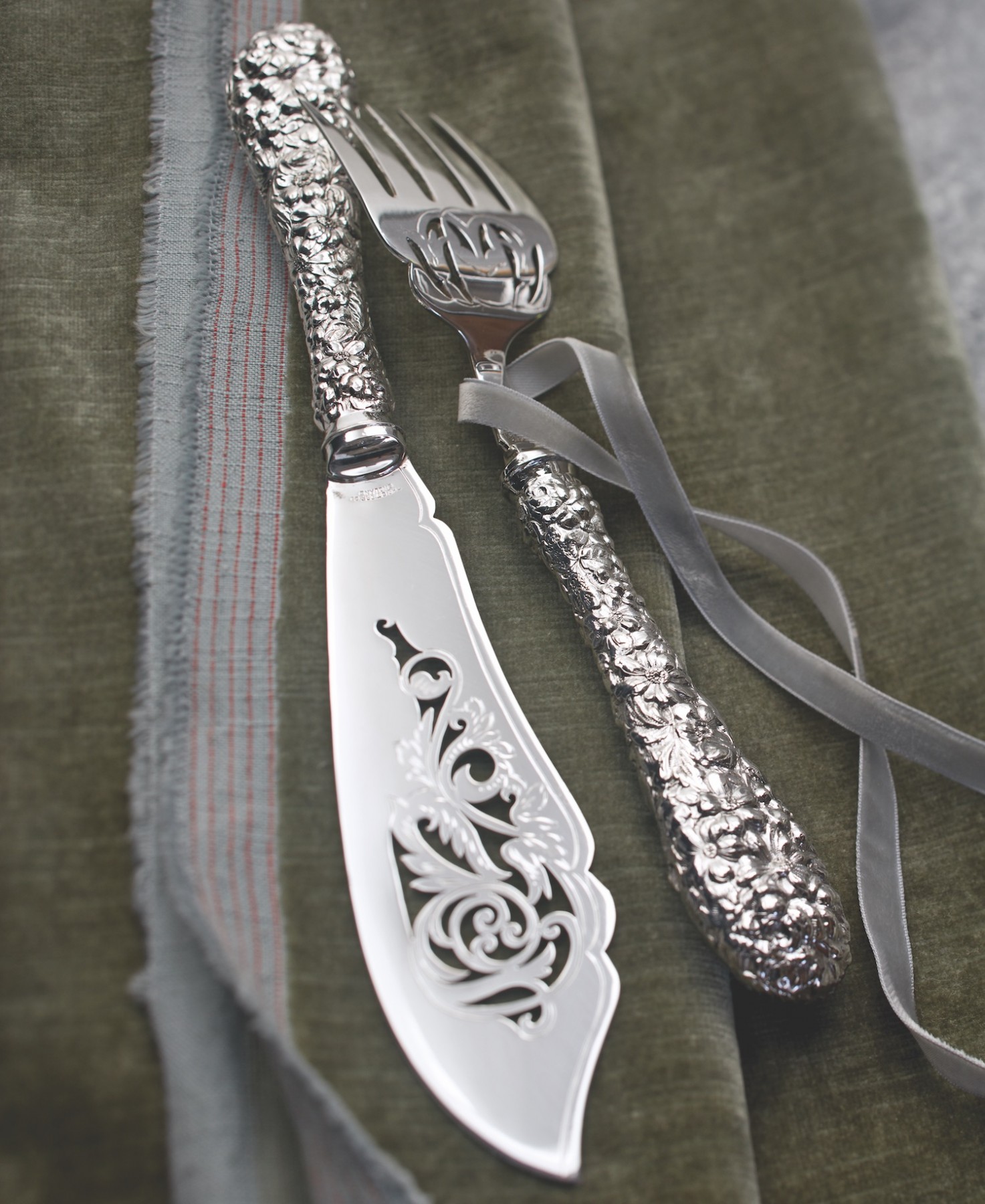 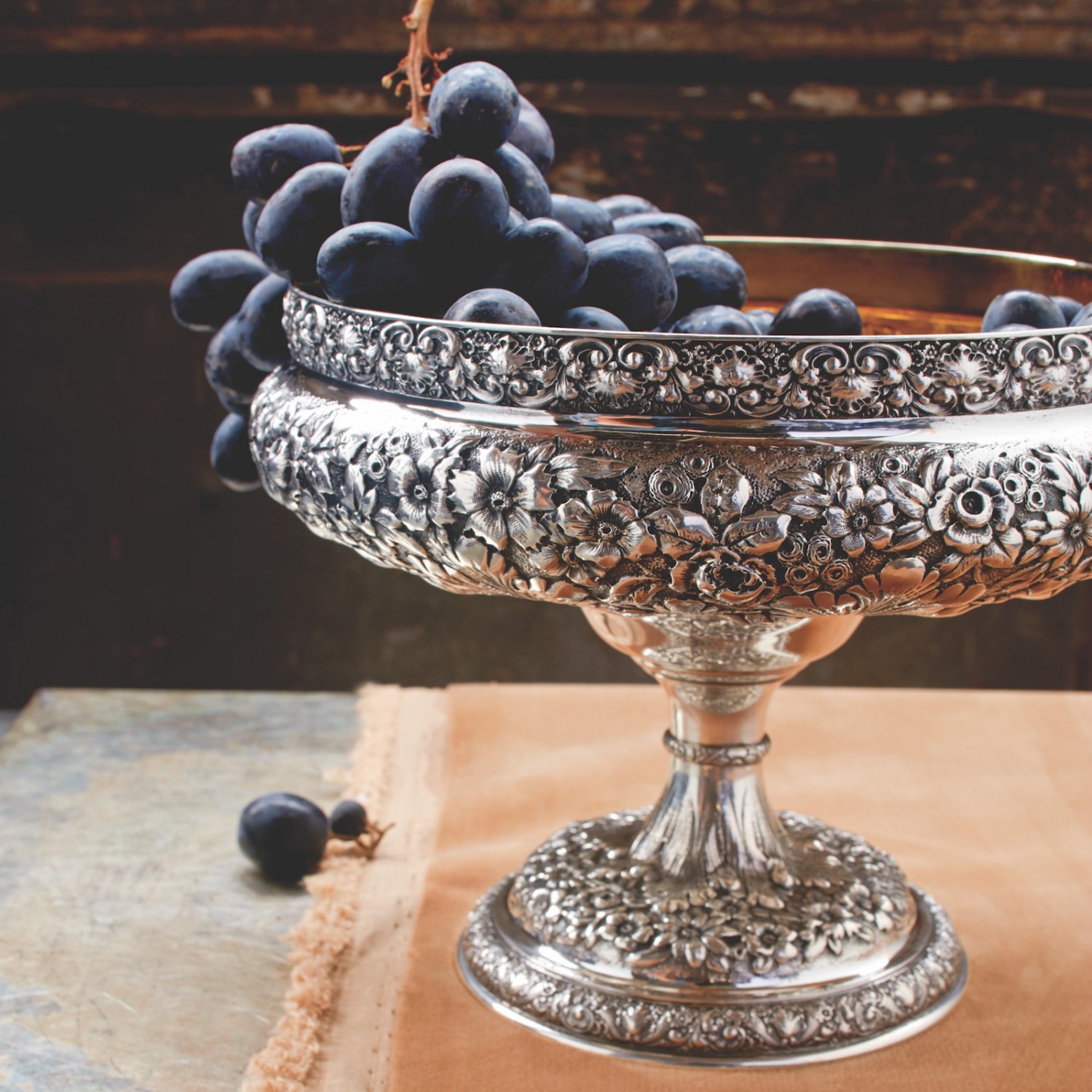 An antique footed repoussé centerpiece has an elegant gold-wash treatment inside the bowl (Tiffany & Co.). 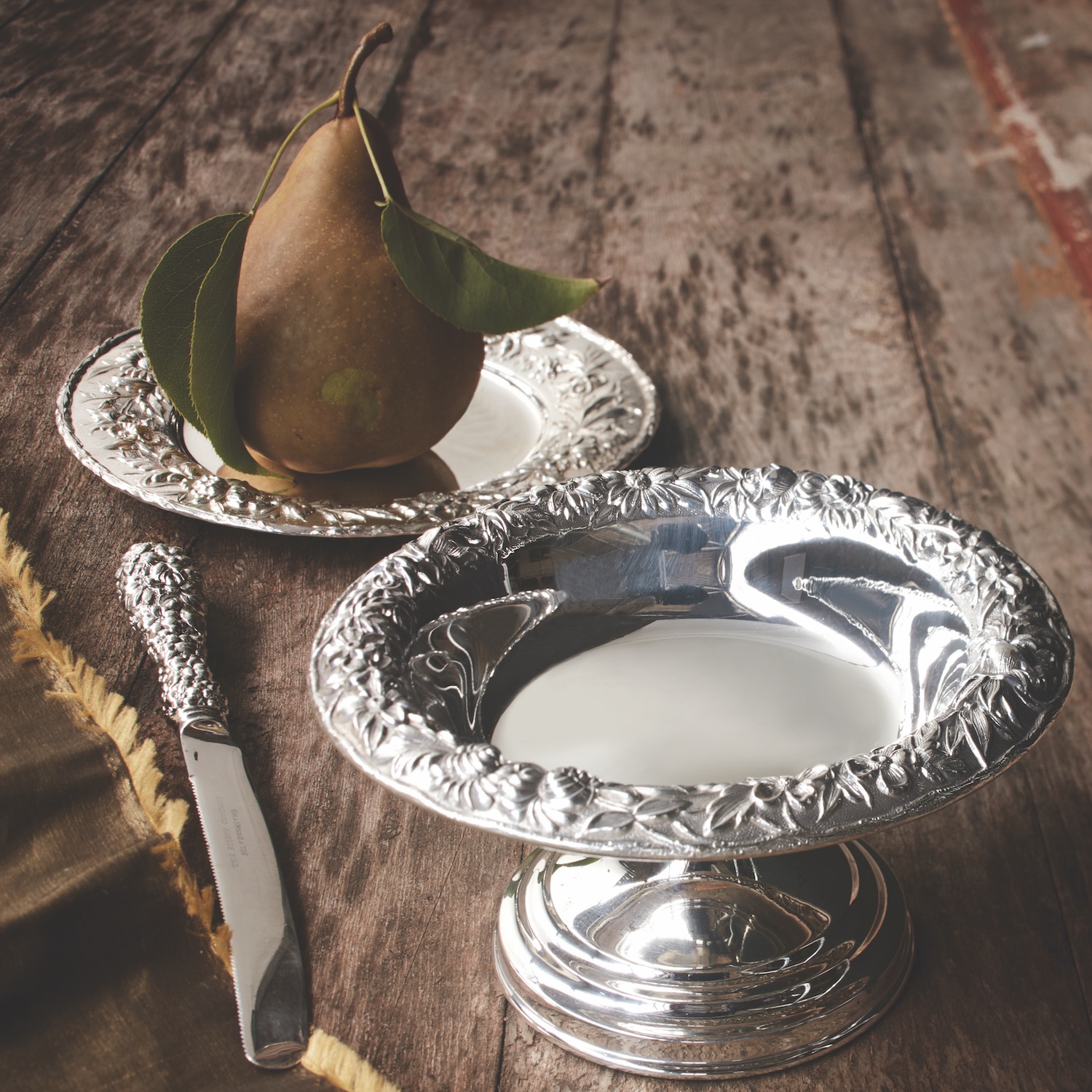 Repoussé elevates any surface it touches. A beautiful compote shines next to a bread and butter plate (both S. Kirk & Son) and an antique blunt knife (Jenkins & Jenkins) on a weathered table. 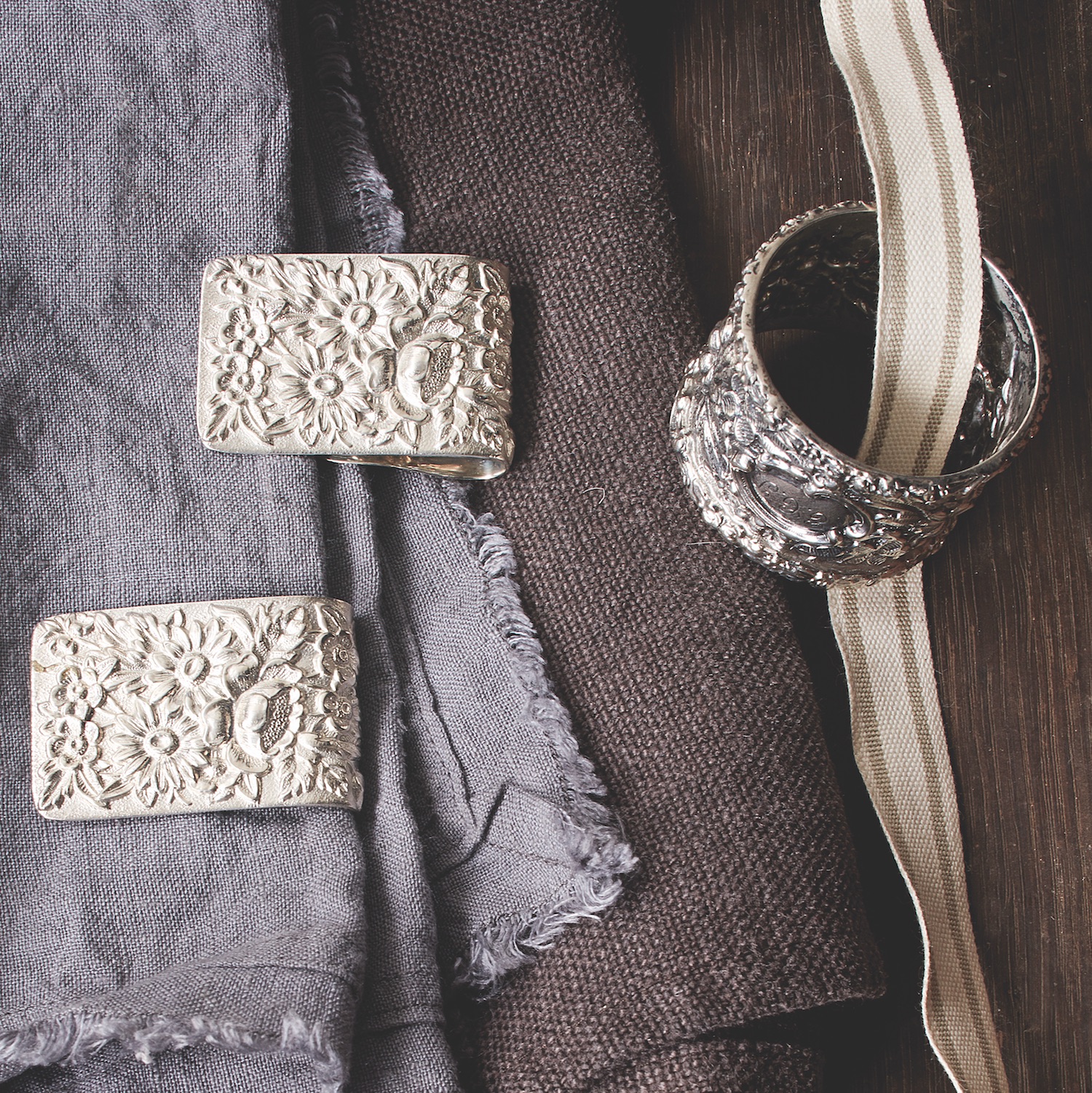 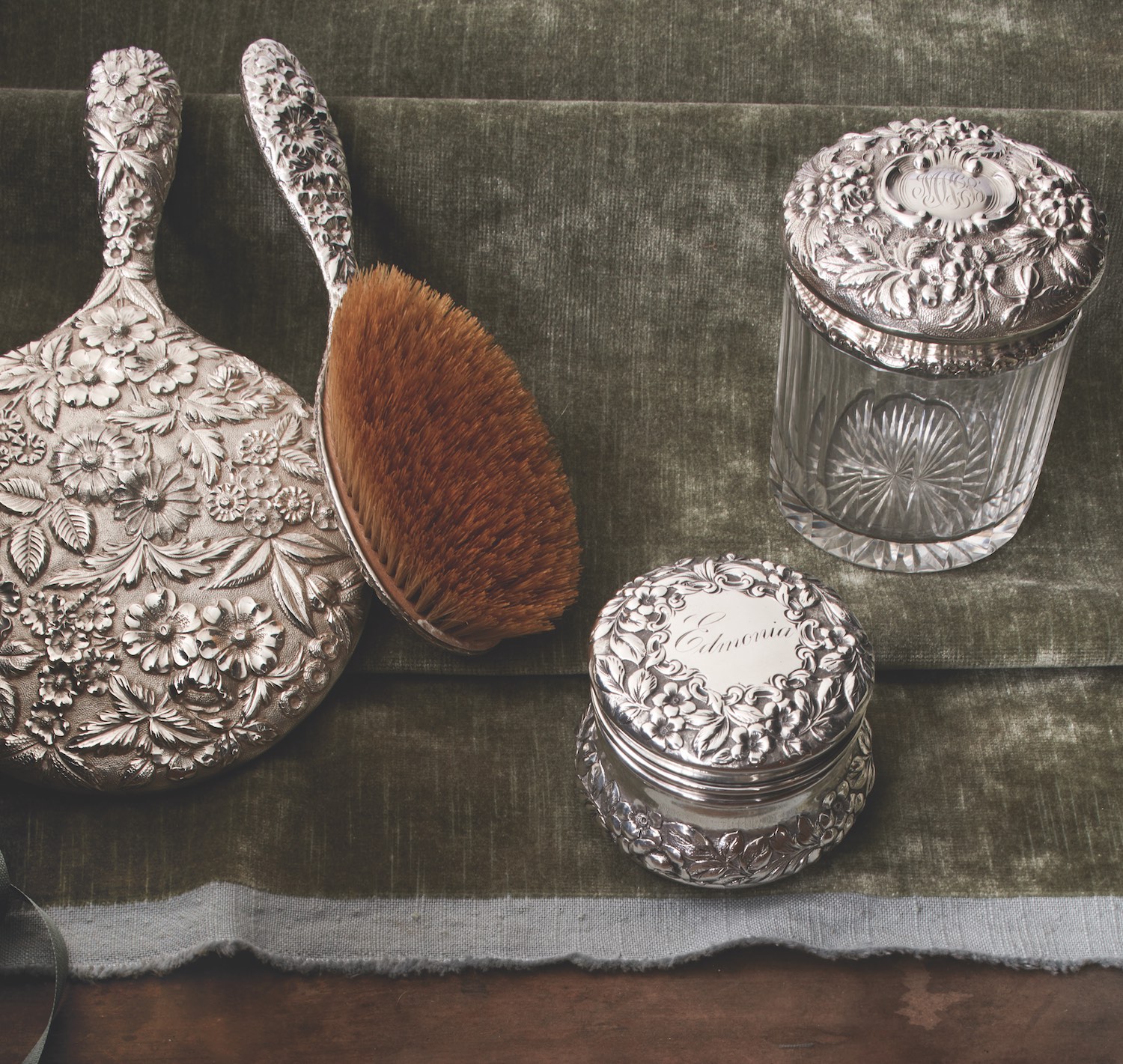 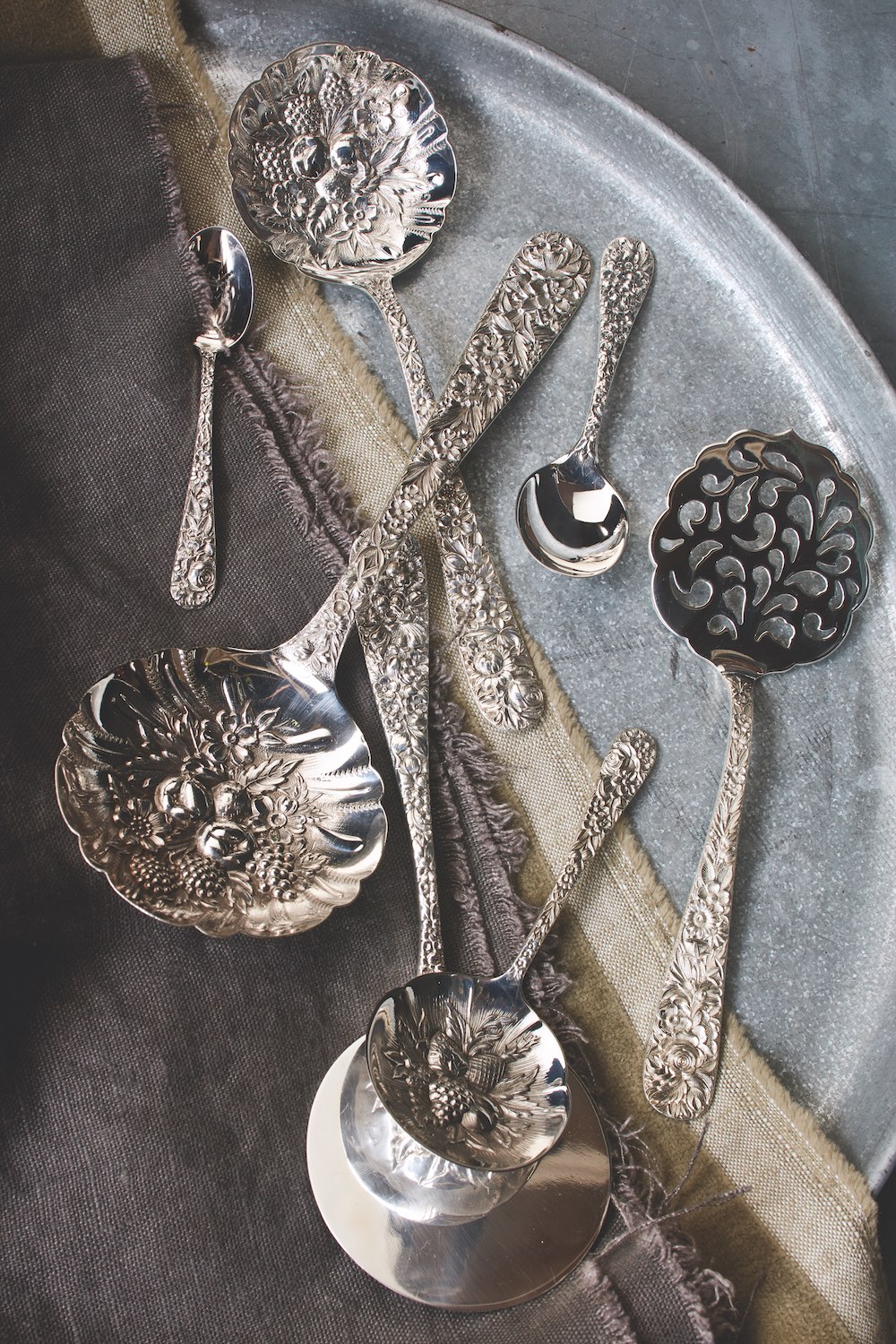 These serving spoons are specially designed for the task at hand. The berry, bonbon, and nut spoons—in all three sizes—include a charming pattern of fruit and ora in the bowl. The small one sits on a serving piece with a completely at bowl used for hotcakes. The tomato spoon is also at with a pierced bowl, and the smaller spoons are for demitasse and for baby (all spoons by S. Kirk & Son and Kirk Stieff ).

Repoussé silver came into popularity during the rococo revival period in decorative arts. Silversmiths nationwide used the technique, but Baltimore was its greatest champion. The silversmiths there created a regional style featuring masses of repoussé flowers with chased details. (Chasing is opposite to repoussé, as it refines the front of the piece, and the two techniques are often used together). Known today as “Baltimore repoussé,” Samuel Kirk introduced this type of decoration in 1828. It was thoroughly copied soon after, but unlike his competitors, Kirk’s iconic pattern, simply called Repoussé, is still made today under the name Kirk Stieff.

And while America fell under the spell of neoclassicism, art nouveau, and other decorative styles, repoussé silver—outfitted in its rococo glory—has never fallen out of favor. When accounting for the style’s longevity, writer Jack Tanis noted the following in an article for Silver magazine: “What you see is what you get, and what you get is an eyeful of pretty—drippingly saturated pretty.”

“Everyone should have at least one piece of Kirk’s Repoussé. It’s so ornate that it goes with everything. It’s an iconic American flatware pattern that has been loved and celebrated for generations.”—Mimi Bremer Woodruff, Beverly Bremer Silver Shop

Step Up Your Table Settings