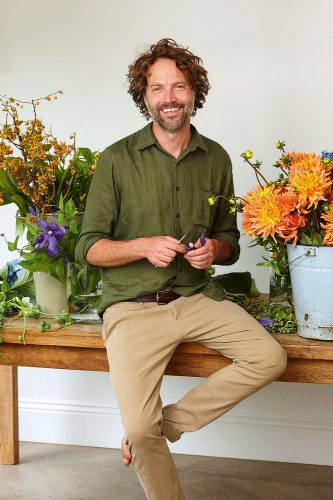 Though celebrated florist Robbie Honey titled his book The Accidental Botanist (Clearview, 2018), the term accidental may be a bit misleading. Honey’s latest iteration as a botanical photographer may have been unplanned, but his passion for flowers is lifelong.

Growing up outside Harare, Zimbabwe, Honey spent his childhood barefoot and outdoors, roaming his family’s estate and the nearby countryside accompanied by a menagerie of animals, including a pair of monkeys.

“Flowers always captured my imagination,” says Honey. “As soon as I could, I was growing things. I got a patch of garden where I was planting flowers. Even as a child I wanted to learn each flower’s Latin name.” At age 11 he became the youngest member of the Orchid Society of Zimbabwe, and his father built him his own orchid hothouse, complete with misting machines.

As a young man, his passion for discovery grew. Trips around the African continent soon led to trips around the world searching for new flowers. “The exciting part for me is the adventure of finding something beautiful,” he says. For Honey, each flower is a story, a leading character in his latest adventure, a memory, and a friend.


One day as he started sketching a ginger lily, Honey absentmindedly took the flower apart and laid the pieces on paper to photograph. He posted the photos on Instagram and the avid response surprised hime. Followers were drawn to the pared-down composition. “People really seemed to like the photographs,” says Honey, who is quick to note that his images are not academic in nature, but evocative.

In the book, flowers organized by color are photographed in full and in pieces. Rather than feeling cold and surgical, the effect is surprisingly stirring. Purple Chinese wisteria looks regal with its bowed head. The face of a Lenten rose looks open, timid, and optimistic (a good sign for one of spring’s first flowers). Other less familiar ones look as whimsical as their names sound, like the yesterday- today-and-tomorrow bush, whose flowers change from purple to white over the course of days, or Dutchman’s pipe, an African flower with a rusty velvet pattern that looks like the remnant of a Fortuny fabric.

Like a proud parent assembling a scrapbook of his children, Honey adds personal notes to each image about where he found them. “I bought these flowers from the flower market in Seoul’s express bus terminal,” he writes in one entry. “Leaving Kuala Lumpur airport, en route to Langkawi Peninsula, I spotted this gardenia growing by the side of the road,” he writes in another.

In discussing his work, Honey mentions a Georgia O’Keeffe quote that’s been on his mind: “When you take a flower in your hand and really look at it, it’s your world for the moment.” With his book, Honey gives readers a new world to admire.