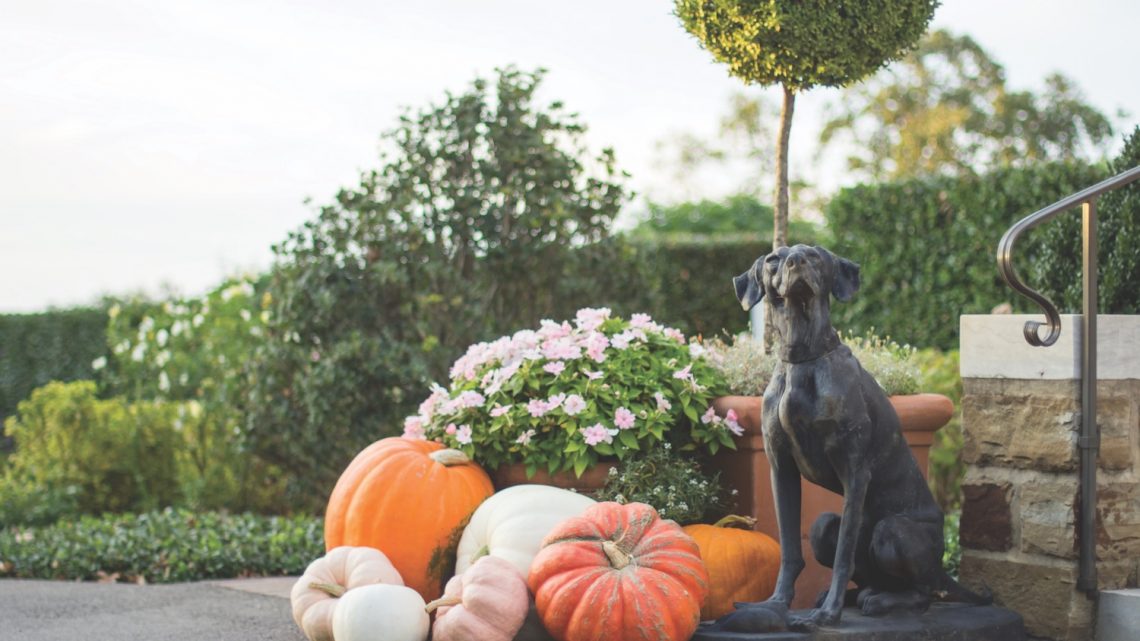 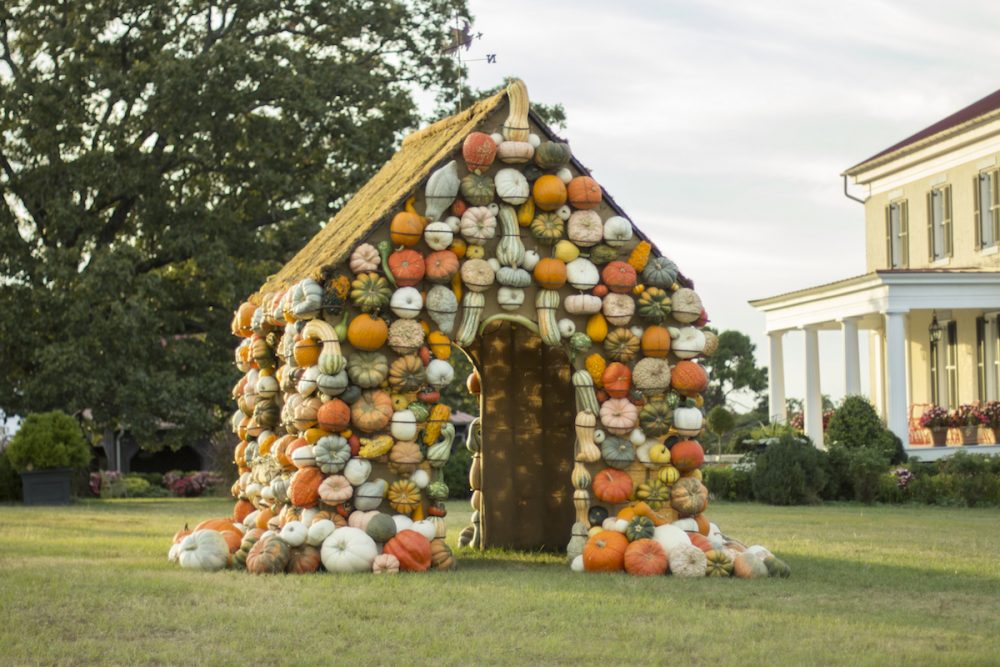 Despite what the calendar says, autumn doesn’t begin for me until I see my first pumpkin of the season. Pumpkins mean delicious seasonal desserts, beautiful fall centerpieces, and creative home and garden décor that starts at the dining room table and extends to the front door and beyond. I’ve even made a house out of pumpkins! This orange, round squash plays a quintessential role in life at Moss Mountain Farm, indoors and out. But pumpkins are not all created equal. They vary greatly in size (palm- sized minis to 1,000-pound giants), color (white, green, tan, orange, blue), texture (smooth, warty, crackled, ridged), shape (from squat to round), and use. Let’s explore some of my favorites. 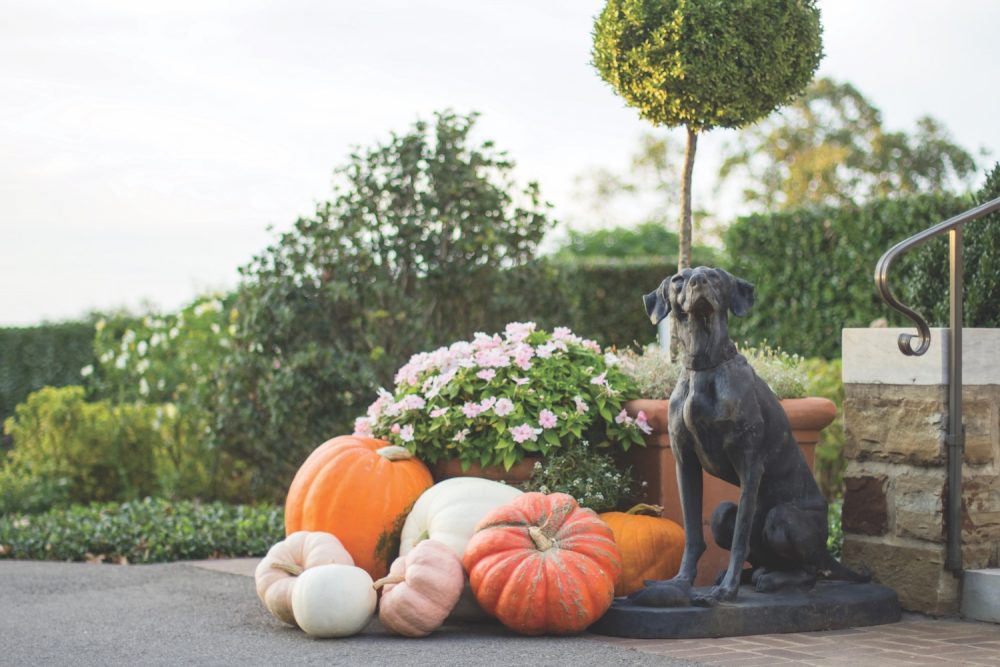 Decorate your entryway with ornamental pumpkins this fall for a delightful dose of color. Photo by Steven Veach

THE BEST PUMPKIN VARIETIES FOR YOUR AUTUMN RECIPES

Over the years I’ve used pumpkin in recipes ranging from savory chicken stew to crème brûlée and martinis, and I’m not even close to finishing exploring the boundaries of this versatile fruit. It brings a flexibility to cooking that I really admire. Sweet desserts and breads? Check. Savory main dishes? Of course. Thick, creamy soups? Naturally.

And the health benefits are undeniable. One cup of fresh pumpkin contains only 3 grams of sugar and is rich in fiber. It’s also a great source of minerals and vitamins A, C, and E. So eat up!

While all pumpkins are edible, some are better for taste and texture. Scout out some of the more popular cooking varieties to make your dishes shine.

Long Island Cheese • This beige heirloom pumpkin got its name from its squat shape, which resembles a wheel of cheese. It’s a sweet, delicious variety that is great for soups, pies, and most recipes.

Jarrahdale • You’ll have no trouble spotting this gray-blue pumpkin from a distance. Its rich flesh makes it suitable for both sweet and savory dishes.
Red Warty Thing • Another visually striking variety, this one has dark- orange to reddish skin covered in small bumps, or warts. It dates back to the 1800s and can be used in a wide array
of recipes. Or you can simply enjoy its ornamental appearance. 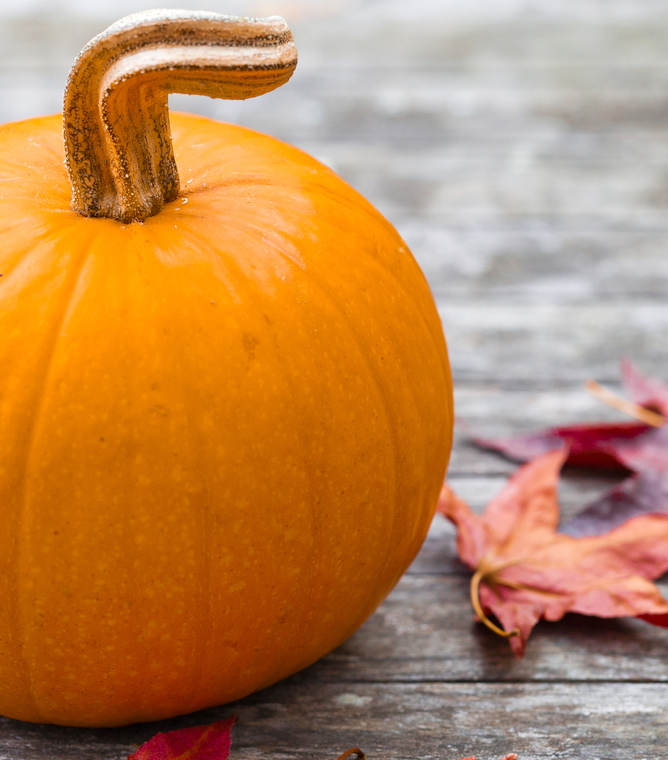 New England Pie or Sugar • These pumpkins are often found in the grocery store or at farmers markets and include several types of smaller pumpkins grown for baking. Their small size and round shape make them very manageable in the kitchen (and oven), and they pack a sweet, fleshy pulp that’s perfect for desserts and sweet breads.

I like to bake Sugar pumpkins in advance and freeze the pulp so I always have homemade pumpkin on hand. Here’s how: Preheat your oven to 375°F. Puncture three to four 5-pound pumpkins several times all over with a large meat fork. Place them on a cookie sheet lined with parchment paper, and bake for about an hour. Cool. Then slice the pumpkins in half, and remove the seeds. Scoop out the flesh, and puree. Use immediately or freeze. Get Allen’s recipe for Pumpkin Creme Brulee.

Peanut • Not a peanut-flavored pumpkin but an heirloom variety with a whitish, pink-tinged skin that’s covered in small, peanut-shaped growths. Although the description doesn’t make it sound especially tasty, it is one of the best pumpkins for desserts because of its sugar-laden pulp.
Blue Hubbard squash • I’m throwing you a curveball by including this irregular, pear-shaped blue squash, but its rich, orange flesh is good for sweet and savory dishes alike. Blue Hubbard has an extremely hard outer skin, but it’s worth the extra effort to crack it open.

Any kind of pumpkin can be used for ornamental décor if you like the look of it. Many of the edible “pie pumpkins” have quite unusual coloring and texture, making them just as valuable on the front porch as in the kitchen.

I especially like the minis, which come in a variety of colors and can be used grouped together to fill a wire container or a glass apothecary jar. Or simply mound a bunch of them together along with votive candles.

The best carving or jack-o’-lantern pumpkins are those with a fairly flat base and skin that is not so thick that it is difficult to carve. These pumpkins typically weigh about 10 pounds and are maybe a foot tall. 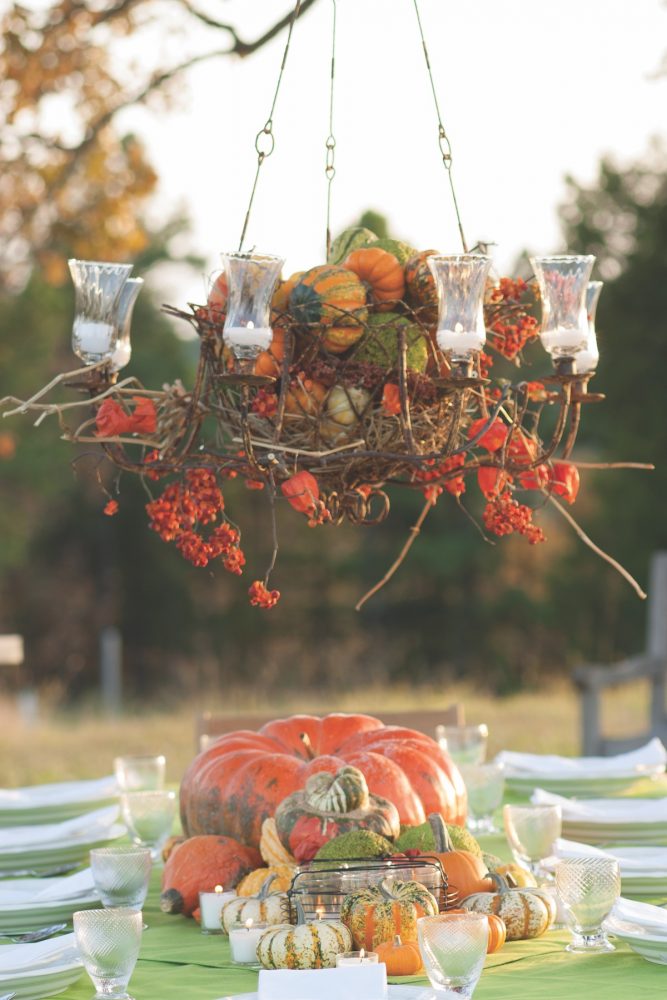 “With the arrival of fall, I set my table with beautiful fall themes that include various-sized ornamental pumpkins,” says Smith. Photo by Jane Colclasure 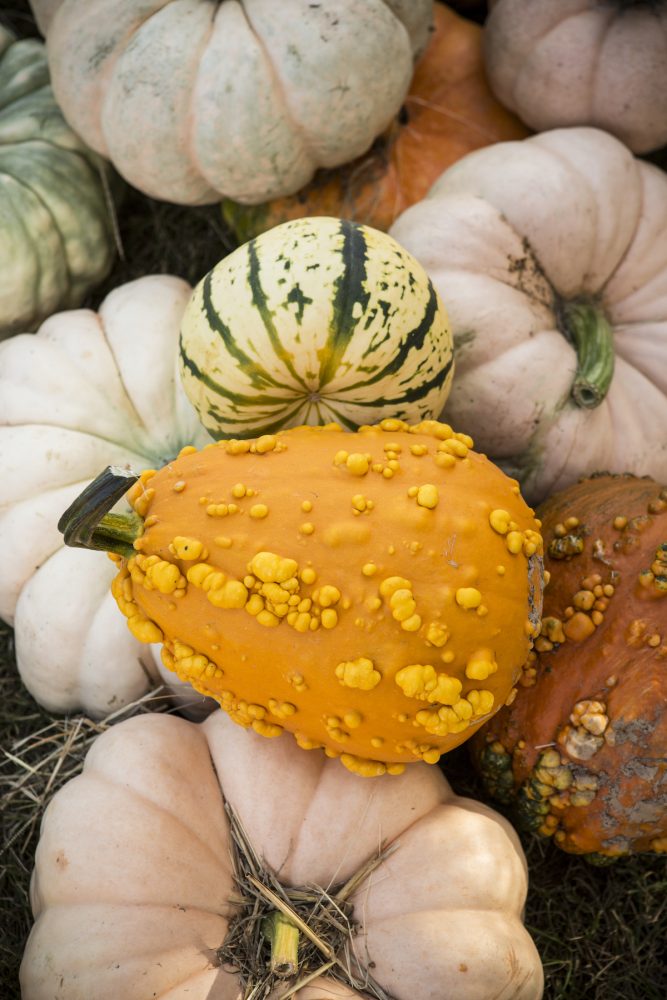 Toad pumpkins, with their small shape and interesting “warts” will add even more whimsy to your designs. Photo by Mark Fonville

A FEW OF MY FAVORITE ORNAMENTAL PUMPKIN VARIETIES

Cinderella and Fairytale • These beautiful varieties look like a classic pumpkin that has been halfway squashed, resulting in a more horizontal appearance. Cinderella is a striking bright orange, and Fairytale has a tan coloring. Both are charming and classic.

Blue Doll • This exotic- looking pumpkin weighs in at 15-plus pounds and has a blocky, almost square shape with deep ribs. That, combined with its dusky-blue color, makes it a fun decorative fruit.

Warty Goblin • Like Red Warty Thing, Warty Goblin’s skin has lots of lumps and bumps. The green warts show nicely against the bright- orange skin, making it perfect for display.

Toad • If you’re looking for a smaller warty pumpkin, Toad fills the bill. Each bright-orange fruit is the size of a large apple and weighs 1½ to 2½ pounds.

Casper • As its name implies, this scene-stealer is ghostly white. The color pops on a dark porch, picking up and reflecting any nearby light. Even without candles, Casper pumpkins display well from a distance.

Hijinks • An award-winning pumpkin variety, Hijinks is celebrated for its smooth, orange skin with distinctive ridges. This surface makes it ideal for painting and carving, and it has a sturdy stem that acts as a perfect handle.

Turban squash • Not a pumpkin but still crazy cool. The Turban squash almost defies description, so I’ll simply say it closely resembles a puffy acorn. It can be green, orange, white, or yellow and is often a mottled version of all four. It typically weighs about 5 pounds and is a must for any serious autumn display. 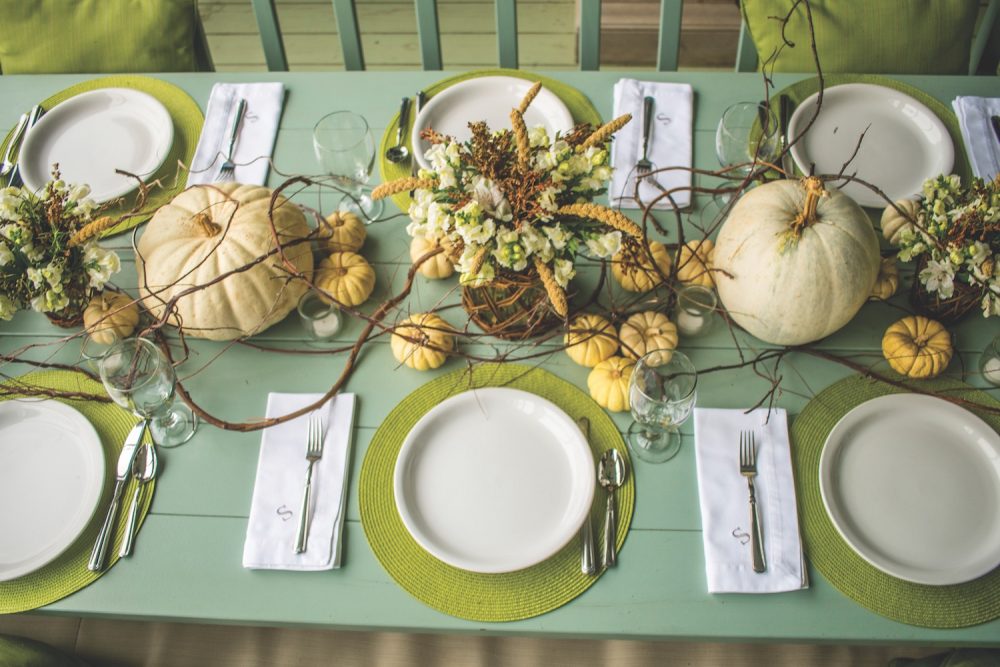 I hope my enthusiasm for the versatile, beautiful, and charismatic pumpkin inspires you to try a new recipe or two. I am always on the lookout for new ways to incorporate it into my autumnal menus. And as you start pondering your fall decorations, consider adding a colorful, white, squat, or warty pumpkin to some of your designs. New and more fanciful varieties are introduced each year, and they add plenty of whimsy to this already magical season. 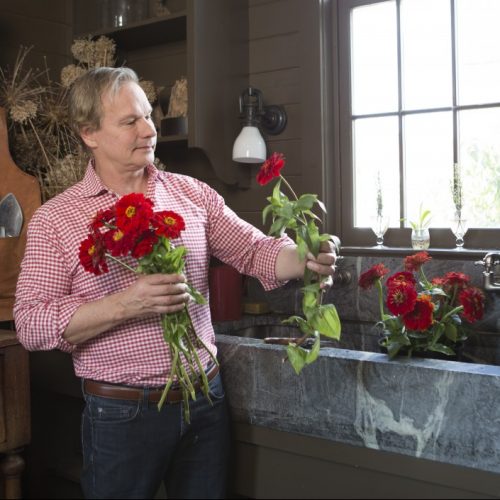 P. Allen Smith is one of America’s most recognized garden and design experts. His Moss Mountain Farm serves as a place of inspiration, education, and conservation. Book tours at pallensmith.com/tours.