You can see this colorful, fragrant perennial for miles in Sequim, Washington, where both a temperate climate and a cluster of small farmers have encouraged it to flourish

Sequim, Washington is a small town with a big reputation. ‘America’s Provence’ and ‘The Lavender Capital of North America’ are two of the most common monikers the town has acquired over the years— and it takes only one visit to learn why. Every summer, the farms of Sequim (pronounced Squim) sway with flowering lavender, creating a canvas only Mother Nature could paint. Purple blooms and royal-blue blossoms blend with fields of periwinkle, pink, and white lavender varieties. Couple this abundant beauty with the herb’s soft, soothing fragrance, and a sensory haze ensues. Yet Sequim is far more than just a pretty place to visit. Rather, residents and tourists alike find a shared communion in the lavender itself. For many, it conjures both past memories and fresh perspectives.

“Lavender is an experience,” says Marco Hermosillo of Olympic Lavender Heritage Farm, one of the two original lavender farms in Sequim. “For many visitors, lavender reminds them of what was put in their closets when they were kids,” he says. For others, lavender is a metaphor for the good things in life—beauty, calm, and fragrance. With a population hovering just over 6,000, Sequim is the ideal environment to experience lavender’s immense diversity. There are roughly a dozen working farms concentrated within a 10-mile radius and each offers visitors a unique agritourism experience. Whether it’s the owner’s distinct distillation process or the varieties of lavender being grown at the farm, individuality is celebrated.

Understanding how this community came to be known as ‘The Lavender Capital of North America’ begins with learning about the plant itself. Lavender is a perennial and an evergreen shrub that flowers in the summer. There are hundreds of varieties grown around the world, but the conditions must be just right in order for it to truly flourish. As a Mediterranean-based plant, lavender thrives in sun-drenched spaces with rocky soil, far removed from precipitation and extreme temperatures. While that’s not typical of weather in the Pacific Northwest, Sequim’s geographic placement makes it an anomaly, and a superlative setting for growing lavender.

Sequim sits in a rain shadow—also known as the Sequim Blue Hole—on the leeward base of the Olympic Mountains. These mountains cause prevailing winds to lose their moisture, resulting in Sequim’s dry, sunny climate. While nearby towns experience high rainfall, ‘Sunny Sequim’ gets just 15-20 inches of rain a year with an average 300 days of sunshine. Despite these idyllic farming conditions, however, Sequim hasn’t always grown lavender.

Western settlers arrived in the ‘Sequim Prairie’ in the mid-1800s, only to find that the summers were too hot to sustain farming efforts. Using the Dungeness River as aid, they built an irrigation system and began farming crops, eventually turning the region into a dairy-farming destination. Over the next century, farming remained the cornerstone of Sequim life. By the late 20th century, however, an influx of retirees plus new housing and commercial developments threatened to demolish Sequim’s agricultural core. To save it, people began buying up land and experimenting with lavender. In 1995 to 1996, the first crop was planted and harvested. In this way, lavender became the means with which Sequim resolidified itself as a farming community.

“There’s a legacy and a responsibility to those who have gone before us,” says Dan Abbott of Sequim’s farming heritage. “We want to maintain that attraction to visitors coming to Sequim Valley.” Abbott and his wife, Janet, own the Washington Lavender Farm and George Washington Inn.

Today, agritourism continues to prosper in Sequim with lavender becoming increasingly important to the economy. Many of the farms are open to the public for touring, “u-picking,” and shopping wares that range from sachets and lotions to dried wreaths. Events take place throughout the summer, including the highly anticipated Sequim Lavender Weekend, which kicks off the harvest season.

Though the weekend, packs in a street fair including music and craft booths, as well as special events held on individual farms, a visit to Sequim any time proves compelling. The town remains a nostalgic snapshot of small-town American life, but one that is forward-thinking—all because of a group of farmers who banded together to save a rural heritage, while building a new legacy in lavender for generations to come. 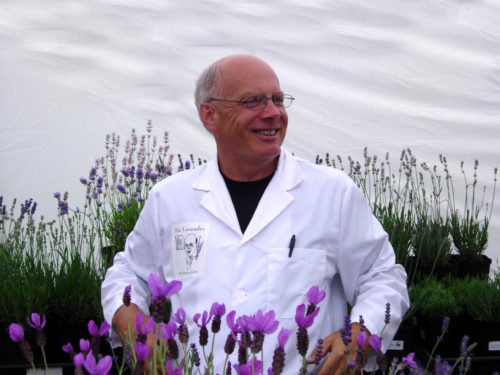 Dr. Lavender of Sequim lavender farms gives some
of his best tips for growing lavender