When New York-based artists Brice and Helen Marden first stayed at the Golden Rock Inn on the island of Nevis, they were smitten and, impulsively, bought it. The inn, on a former sugar plantation, had seen better days, but the couple saw tiny Nevis (only 36 square miles) as an unspoiled gem, and the inn as a diamond in the rough. 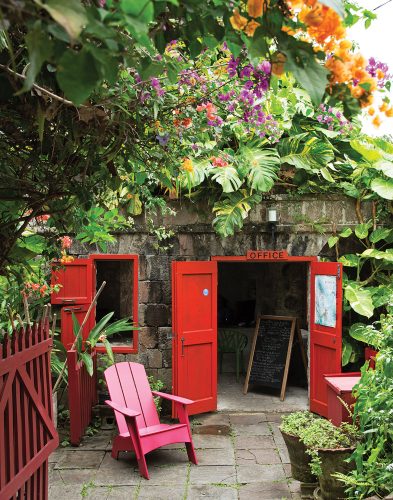 They hired Miami landscape architect Raymond Jungles to maximize the potential of the property. The aptly named Jungles was happy to accommodate Helen’s affinity for barely tamed nature—what she describes as “nature almost winning.” Working with local nursery owners, landscapers, and stonemasons, he deployed a mix of native and imported plant materials. The artful mix of subtropical species from near and far evokes an exuberance of exotic color and form. “Helen likes things with spikes and unusual-looking flowers,” Jungles has noted. Green vervet monkeys roam freely, and tree frogs serenade at night.

The property lies on the slope of Mount Nevis, the lofty volcano whose freshwater spring supplies Golden Rock’s restored cistern, now used for irrigation. Water from it courses across a wall-top rill to splash onto a lava boulder and grotto. After wandering in the landscape, guests retreat to 11 uniquely decorated cottages, some painted cheerful pink and deep blue, and dine in a new restaurant with a terrace and a domed pavilion, reflected in adjacent lily ponds designed by architect Ed Tuttle, known for his work on Aman Resorts. At Golden Rock Inn, nature may almost be winning, but the guests win every time. More information at GoldenRockNevis.com. 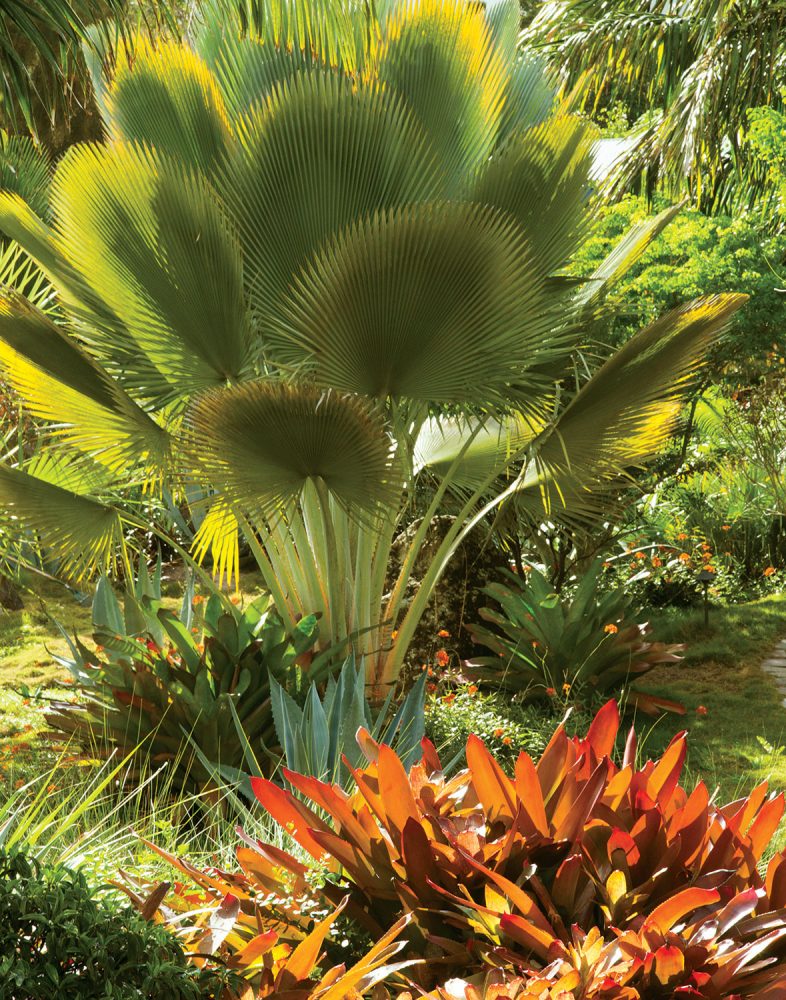 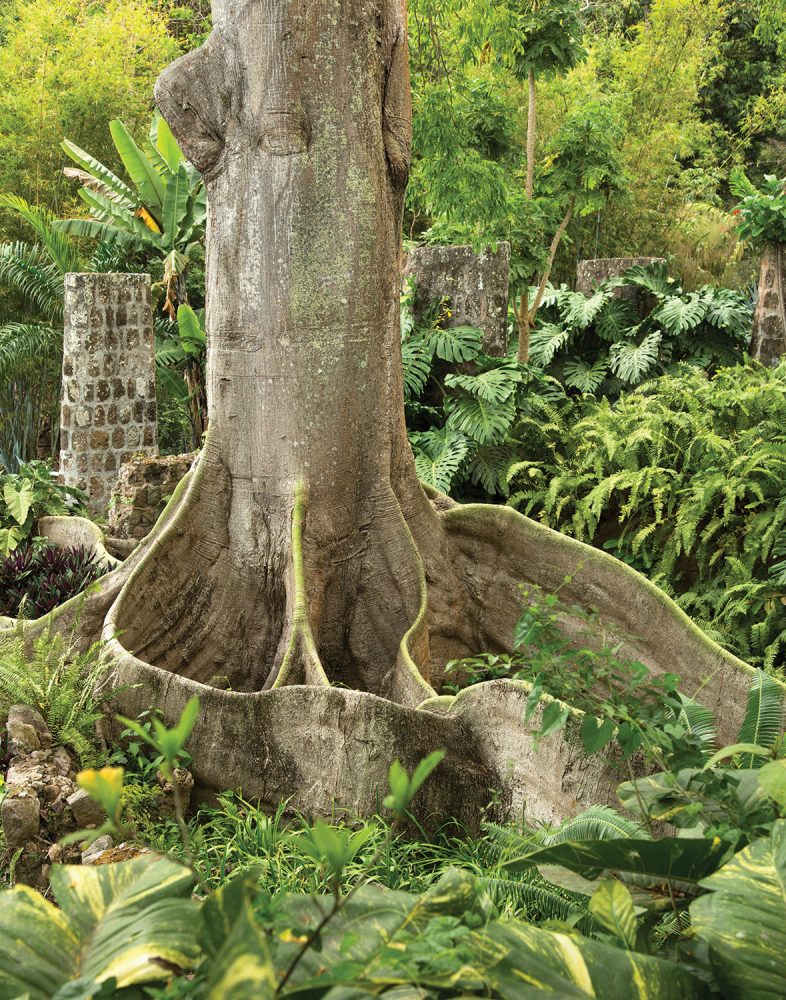 The 5-acre Botanical Gardens of Nevis offer an abundant diversity of orchids, bromeliads, palms (more than 100 species), cacti, and other tropical plants. Plus the gardens include a glass conservatory with rainforest plants and flowers that’s modeled after the Palm House at Kew Gardens in England and houses a Mayan-style ruined temple. The gardens’ three Amazonian green parrots take up residence in the conservatory as well. 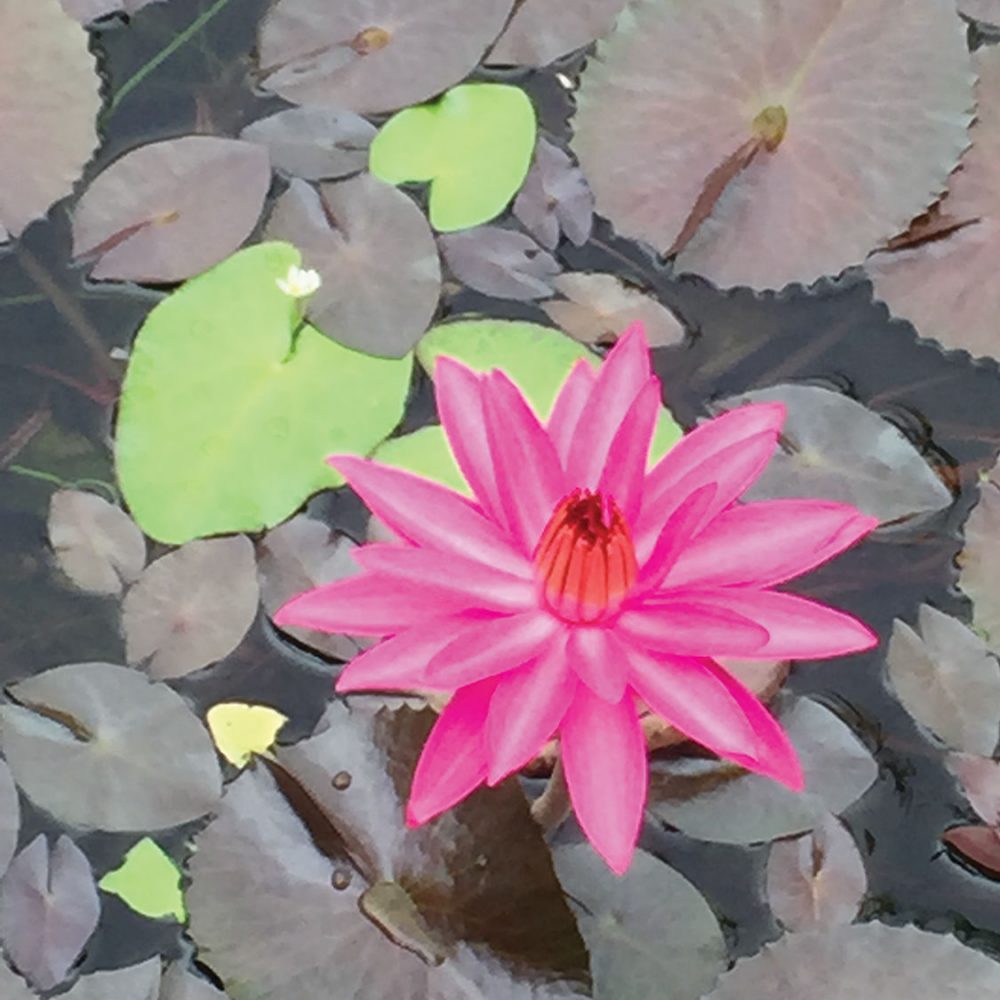