Sophisticated travelers and dedicated Francophiles delight in the storied Ritz Paris, which reopened in 2016 after an ambitious four-year refreshment

The Ritz Paris’ resplendent update, orchestrated by super-architect Thierry W. Despont, marked the first time the hotel—converted into a hostelry in 1898—had been closed to the public in its 100-plus-year history (remarkable considering the four weary years Hermann Göring and his highest-ranking Nazi officers occupied part of it). Throughout the oh-so-careful 400-million-euro face-lift, Despont strove to preserve beloved flourishes while adding contemporary necessities.

As a result, the lipstick-red carpet that always greeted guests at the Place Vendôme entrance has been faithfully replaced, and the antique gilt-slathered furniture that filled public rooms now sports lighter, brighter silks. Within the mix, Despont also added plenty of modern assets, such as lightning-speed Wi-Fi and an updated main patio restaurant whose under-floor heating and retractable roof defy chilly, rainy days.

After a day at the Louvre or Musée d’Orsay, you can now indulge in pampering treatments at Chanel au Ritz Paris then take a dip in the pristine indoor pool covered with mosaic tiles. Later, gravitate to the cloud-like down sofas near the wood-burning fireplace in Salon Proust for afternoon tea à la française. Come evening, pile on your pearls to feel just right in the legendary Bar Hemingway, and then dine at two-Michelin-starred La Table de L’Espadon under the aegis of the hotel’s 10th chef, Nicolas Sale.

The prior staff of 500 has been expanded to 600 individuals, whose attention to detail demonstrates that the quintessentially French grande dame is definitely back in business. 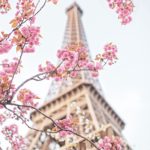 Don’t miss “Paris in Bloom,” with gorgeous photos and an excerpt from Georgianna Lane’s book.