Flower School Fit for an Empress

Flower lovers and designers gather in the South of France for a week of creating, cooking, feasting, and joie de vivre with FlowerSchool New York

When Empress Eugenie, the wife of Napoleon III, tired of the debauchery and skulduggery of the French court, she traveled to a little-known corner in the southwest of France, in the Nouvelle-Aquitaine region, of Eleanor fame. Near the Spanish border and the Atlantic Ocean, this exotic, semitropical village proved the perfect bolt-hole, boasting such country comforts as natural thermal waters, a warmer clime, and most of all, the quiet respite she so longed for.

Hence, named for its royal benefactor, Eugénie les Bains and its famed resort, Les Prés d’Eugénie, was the destination of choice for Eileen Johnson of FlowerSchool New York when she plotted her study-abroad program with four of the world’s top floral designers: Christian Tortu, Shane Connolly, Ariella Chezar, and Emily Thompson. The roster was rounded out by 12 lucky laypeople from all over the globe— yours truly included.

Leave it to two French talents to conjure this chic and dreamy Shangri-La—Christine and Michel Guérard—he, known for his innovative Nouvelle Cuisine, and she, the daughter of a visionary entrepreneur, with impeccable taste and unerring instincts for hospitality. The two lovingly upgraded the resort that had belonged to Christine’s father, Adrien Barthélémy. With the mix of her personal point of view, which included a deep appreciation of the history and rural beauty of the area, and Michel’s brilliant culinary talents, the venture ultimately garnered three Michelin stars and was anointed one of the early Relais & Châteaux properties.

The floral designers, hailing from France, England, and the United States and each possessing their own particular style and design philosophy, did however agree that the thread of the course would be green: searching for plant material on the property and a visit to the town market for fresh herbs, fruit, and vegetables, making for a class that was as sustainable and organic as possible. They had us at “Allons chercher!” (“Let’s go foraging!”) The instructors encouraged us all to find beauty in imperfection, such as dead lichen-covered branches, as well as in the everyday-ness of apricots and other bounty of the region. And during the four master classes, we incorporated just about all of our found treasures, all the while being stretched and inspired by our guides.

Between roaming the countryside, arranging flowers, chopping vegetables in our cooking class, chatting in our robes in the spa Ferme Thermale as we waited for our next treatment, and debriefing over our delectable repasts, fast friendships were also forged, and we realized the greatest gift of all was our time together in the midst of such a paradise.

So, what could be the crescendo of this sublime experience? Well, the magicians had one last trick up their collective sleeve—a group effort comprised of creating all the arrangements for our final dinner, or, as we cheekily called it, The Last Supper. Toasts were given and a few tears were shed, but our fearless leader Eileen launched into a group-sing of “Amen, amen, a-a-men, amen, amen,” which actually seemed just right after experiencing a week of heaven.

More Flowers from the Classes 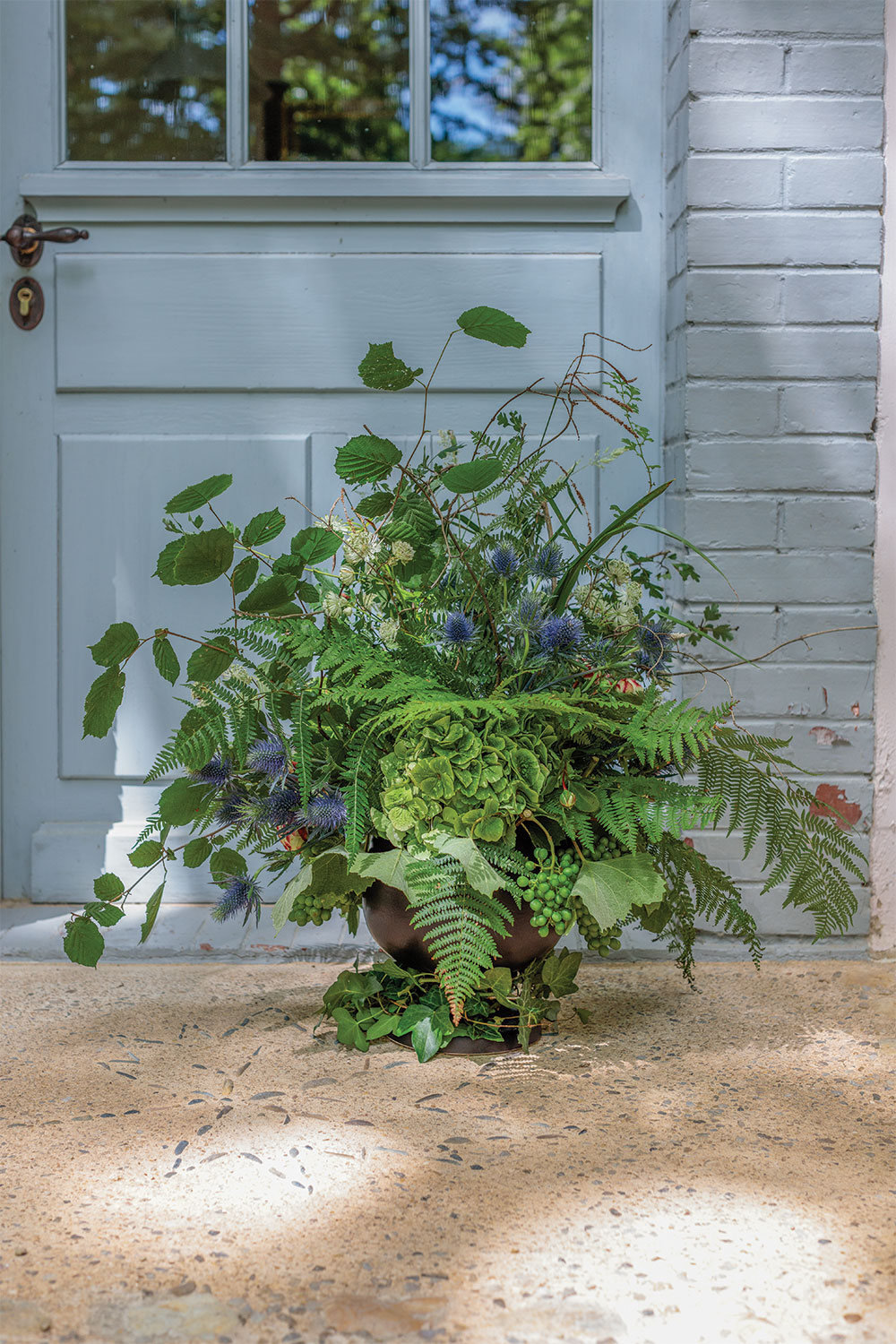 Our photographer captured each student’s arrangement, including this one from the Christian Tortu class. 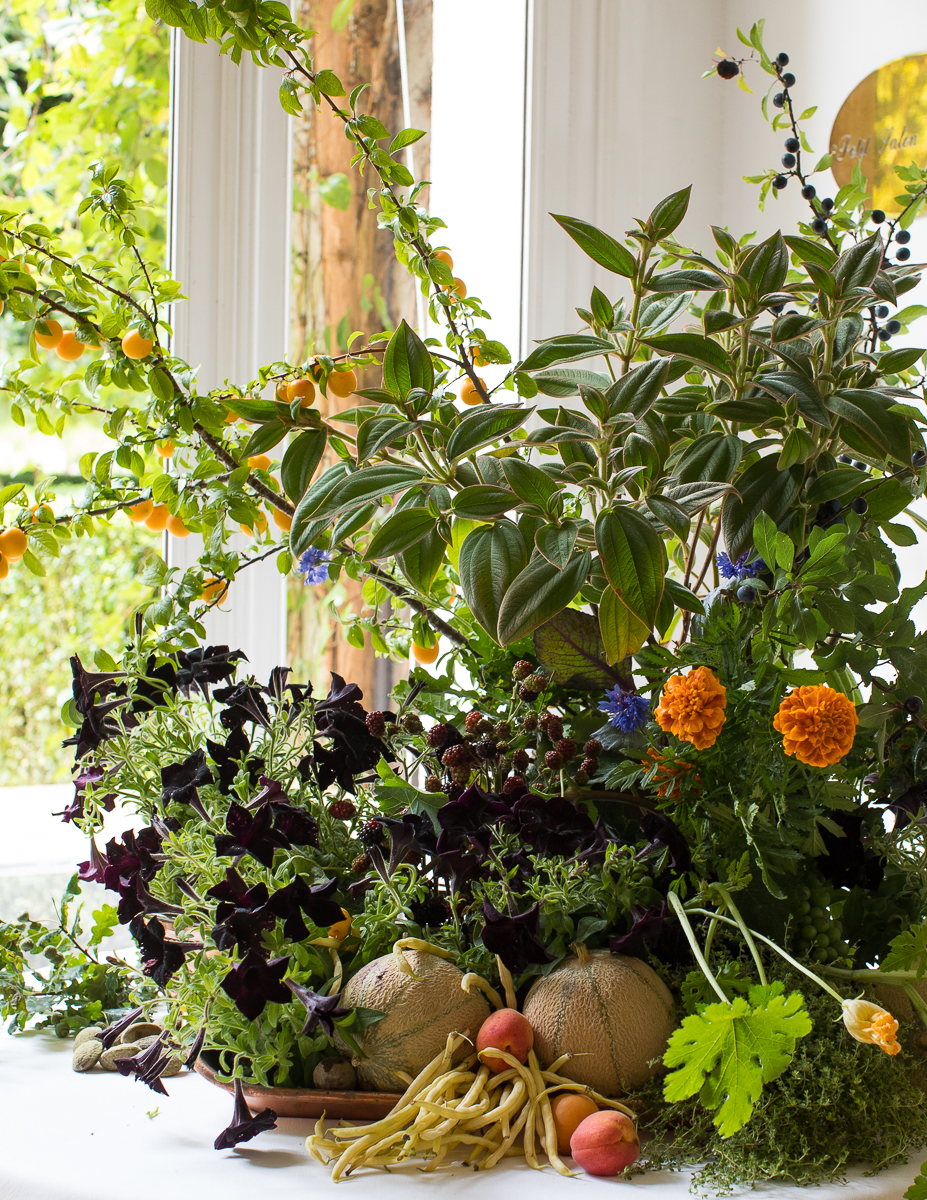 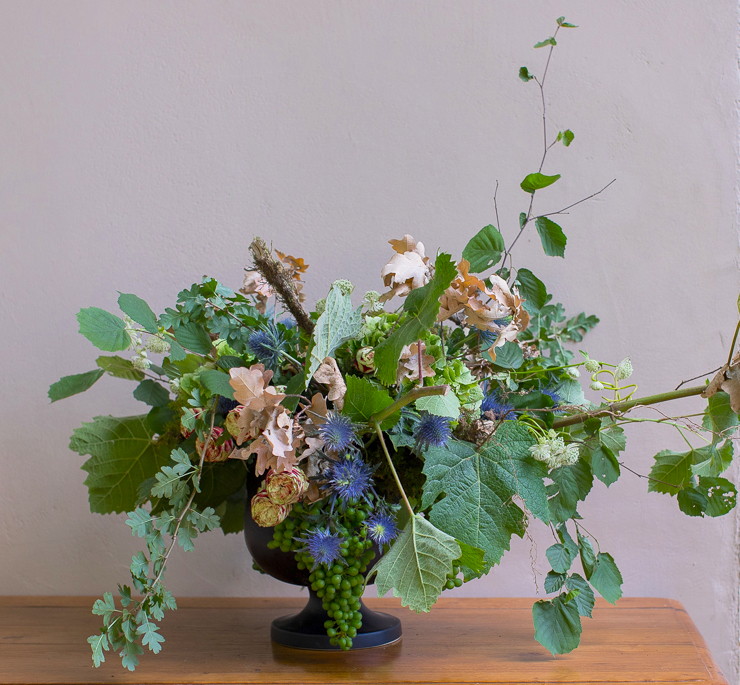 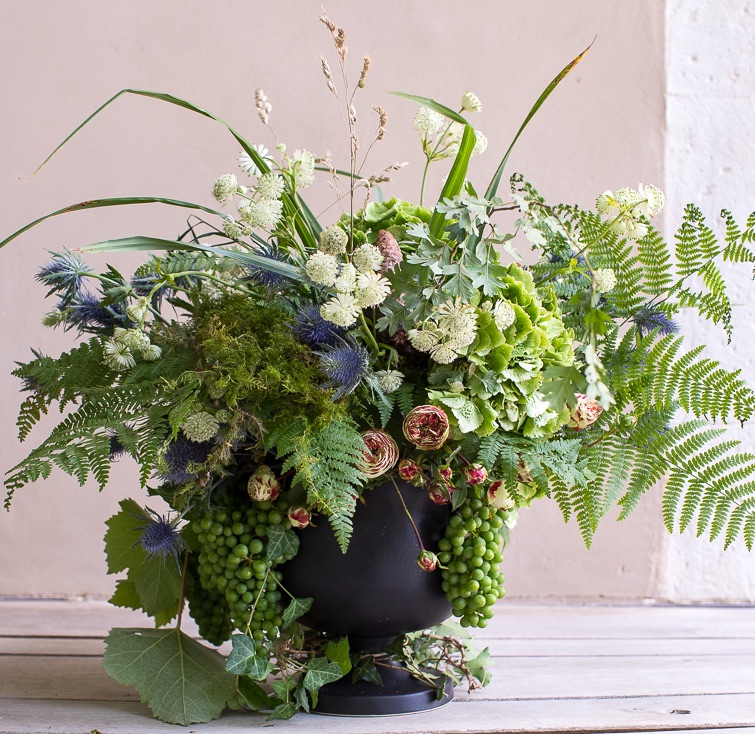 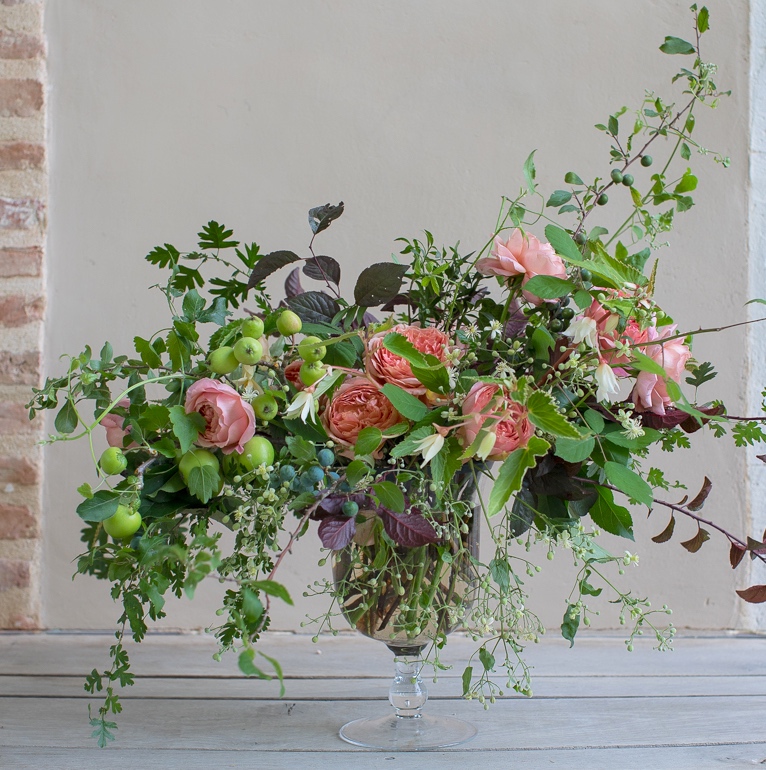 More of the FlowerSchool in France Adventure 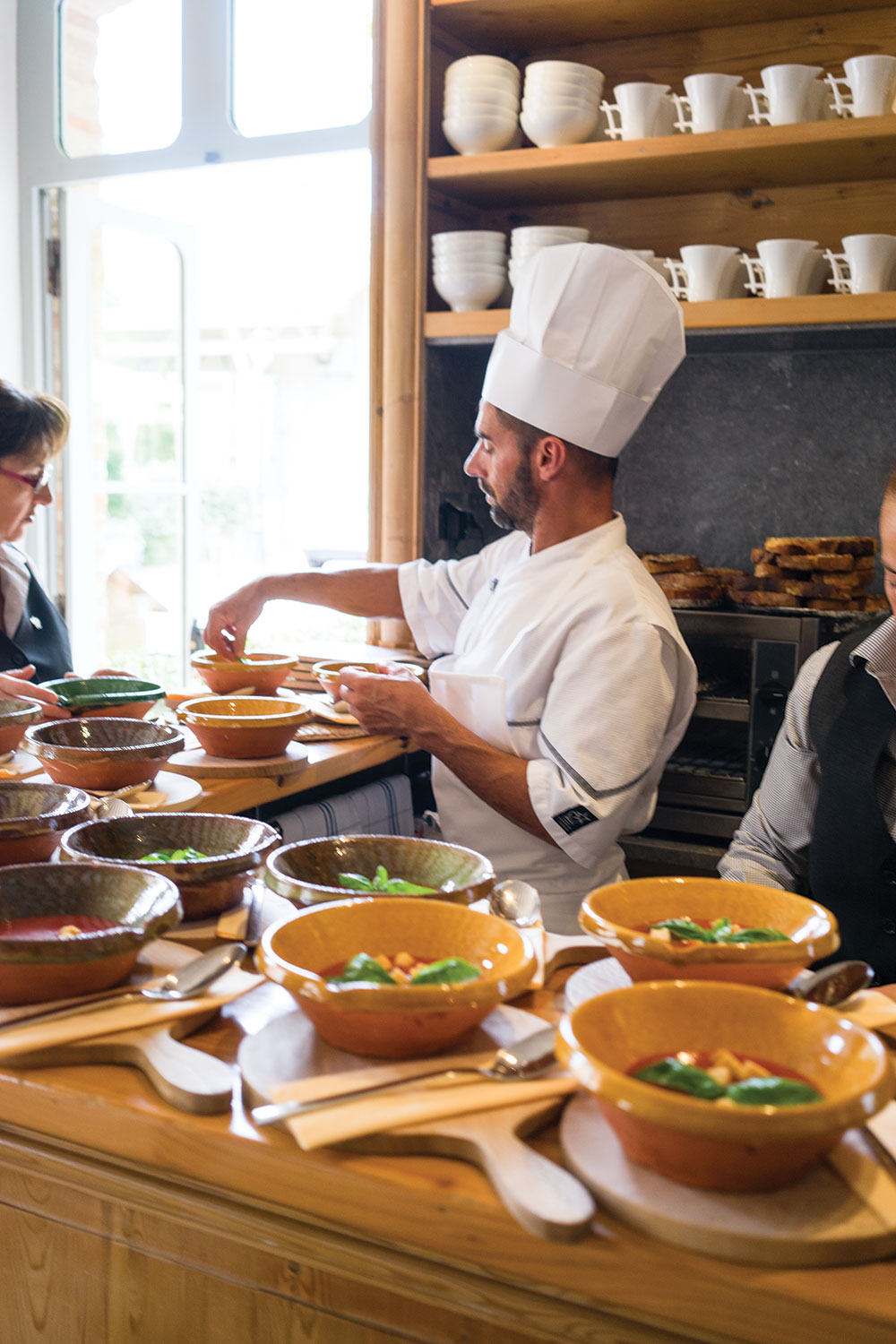 One of the chefs at the Mère Poule & Cie Culinary Café 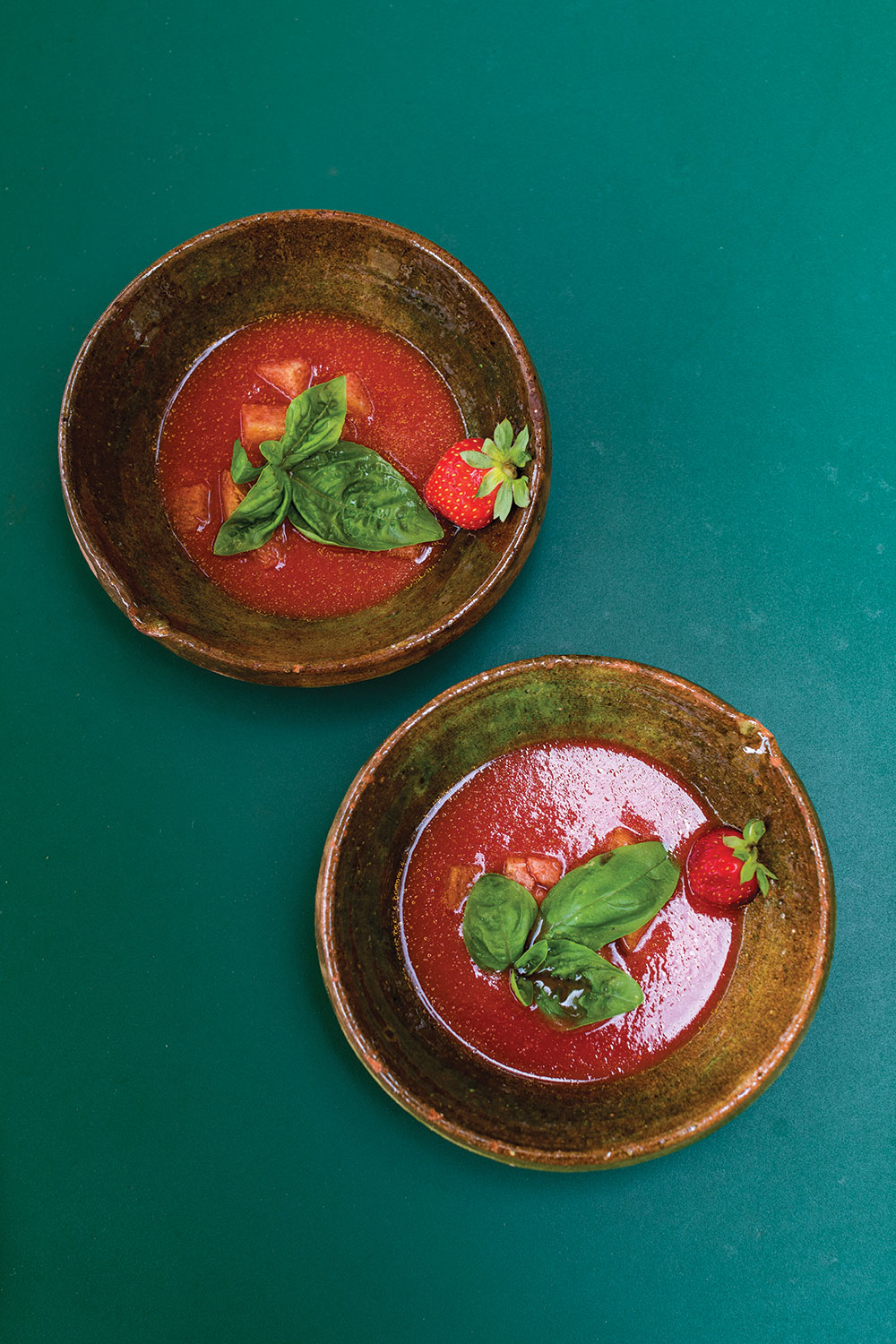 Bowls of the strawberry soup we made in class 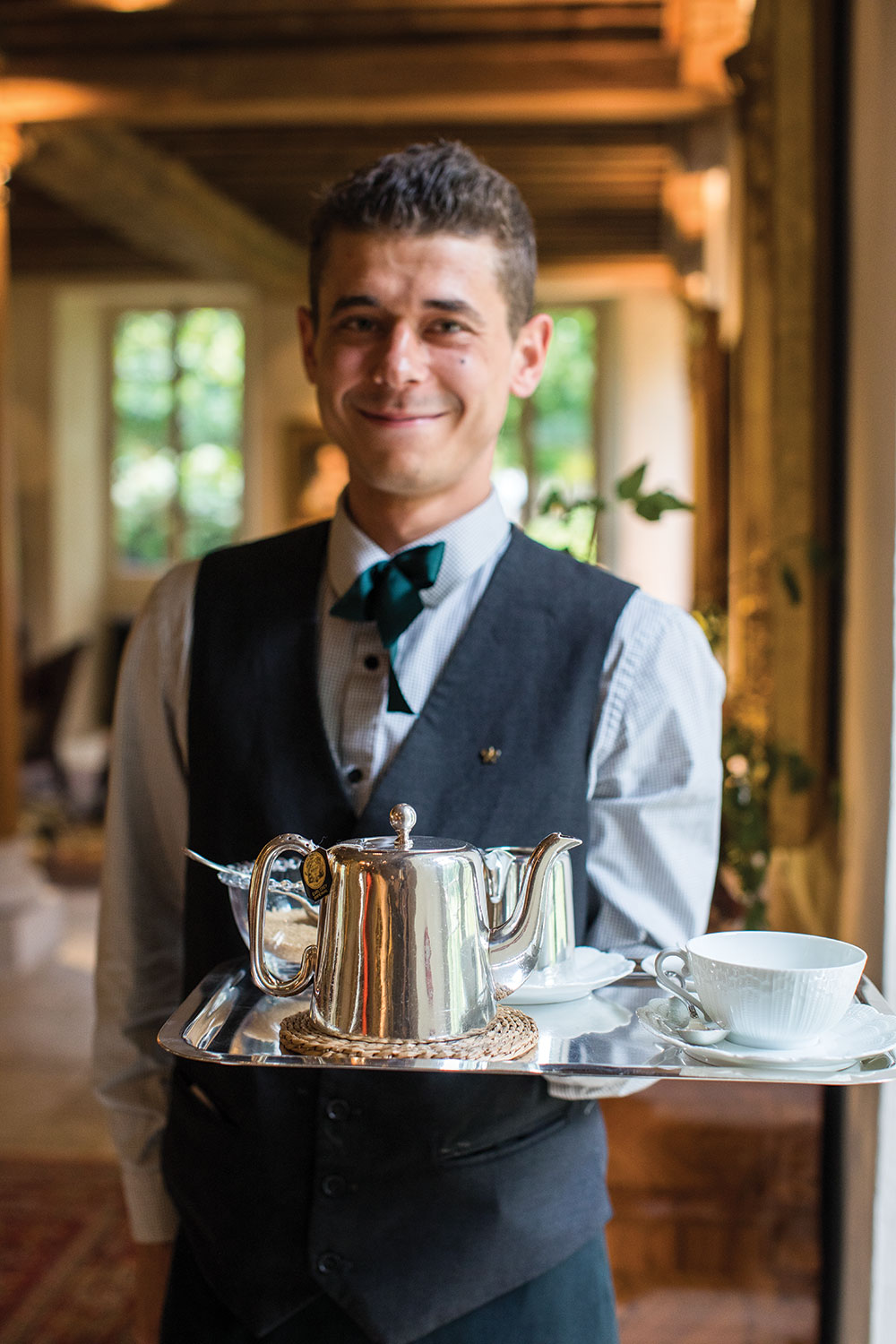 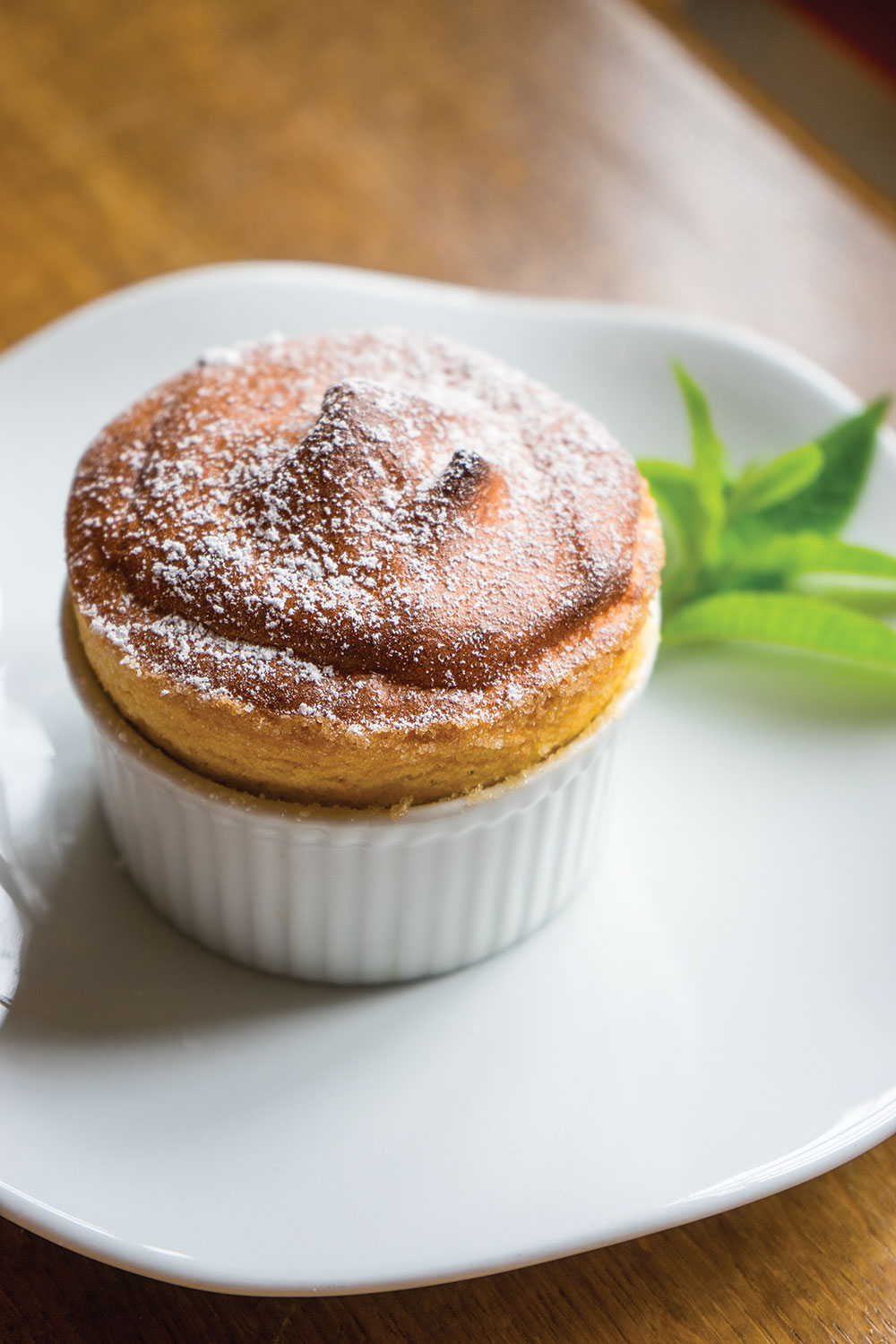 Some of the more adventurous students produced soufflés. 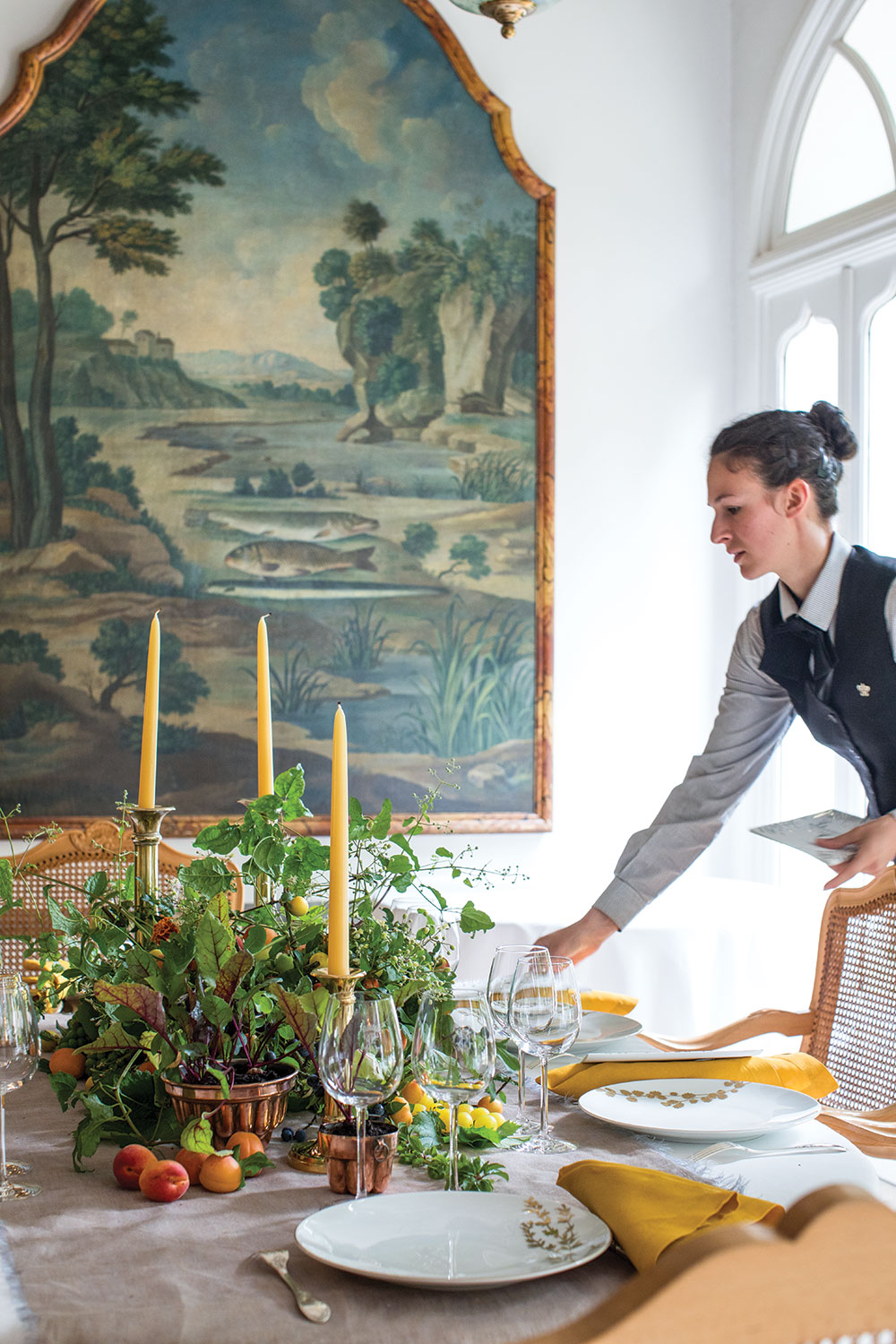 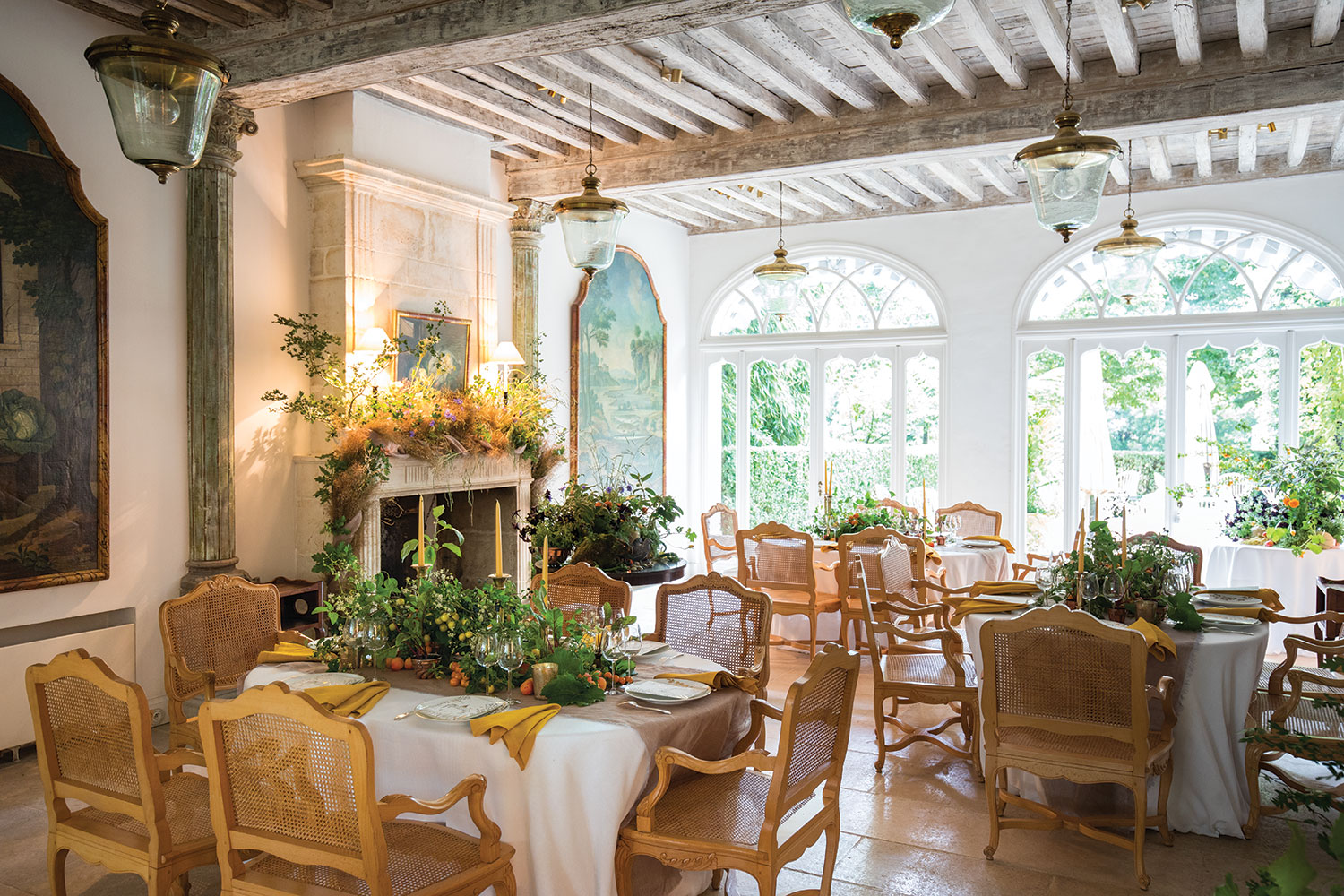 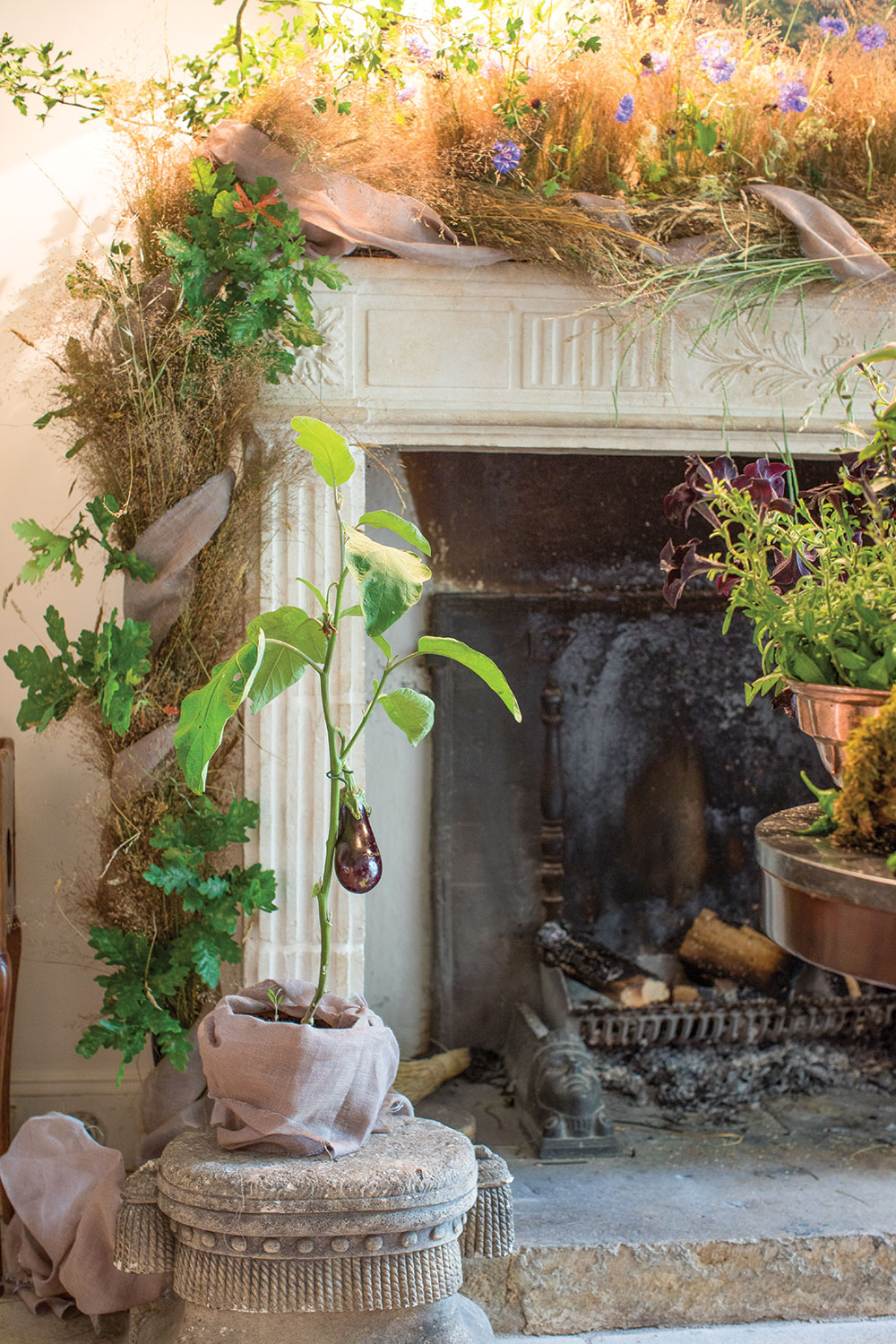 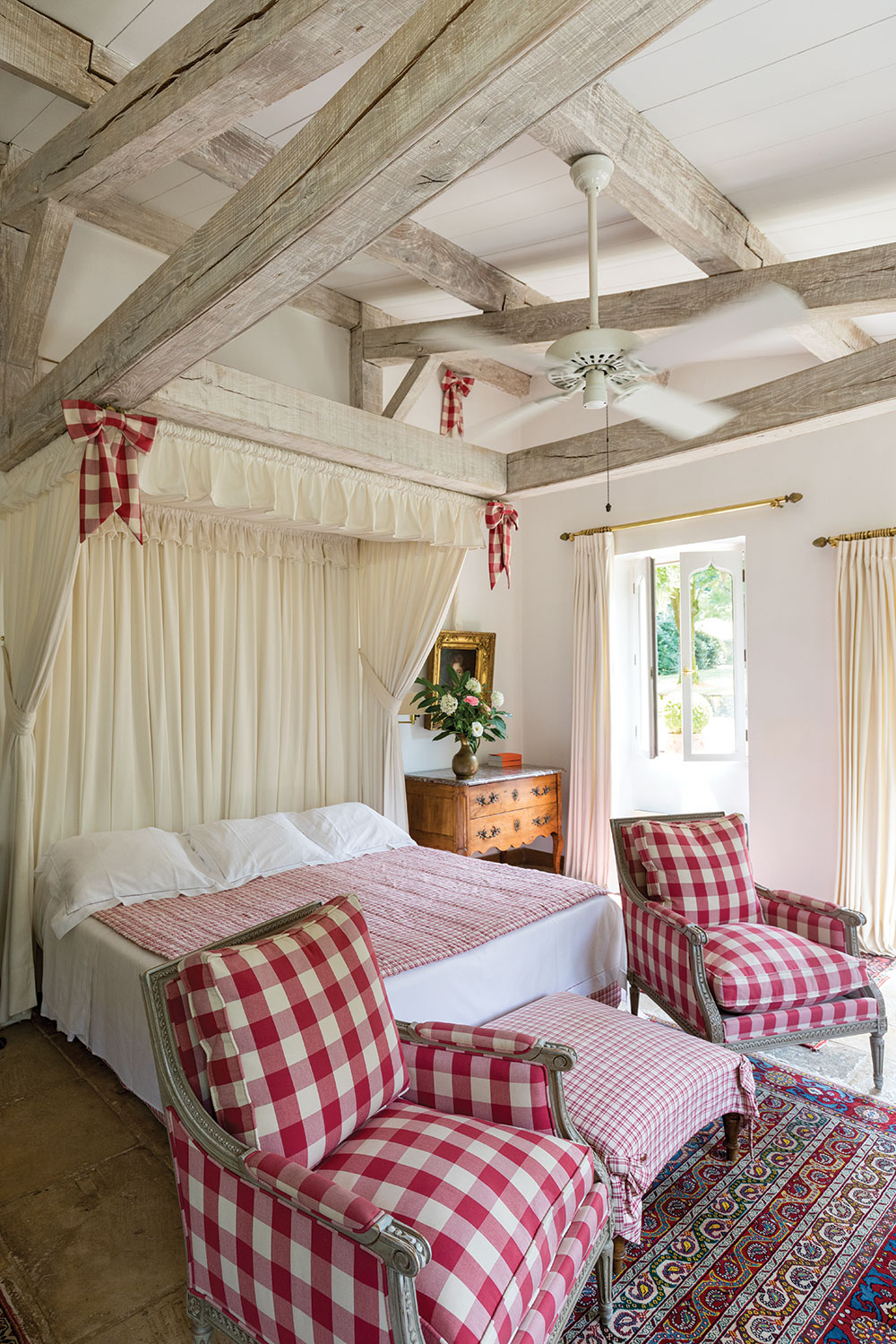 One of the guest rooms is outfitted with iconic French details, such as Louis XVI–style bergère chairs and Provençal checked fabrics. 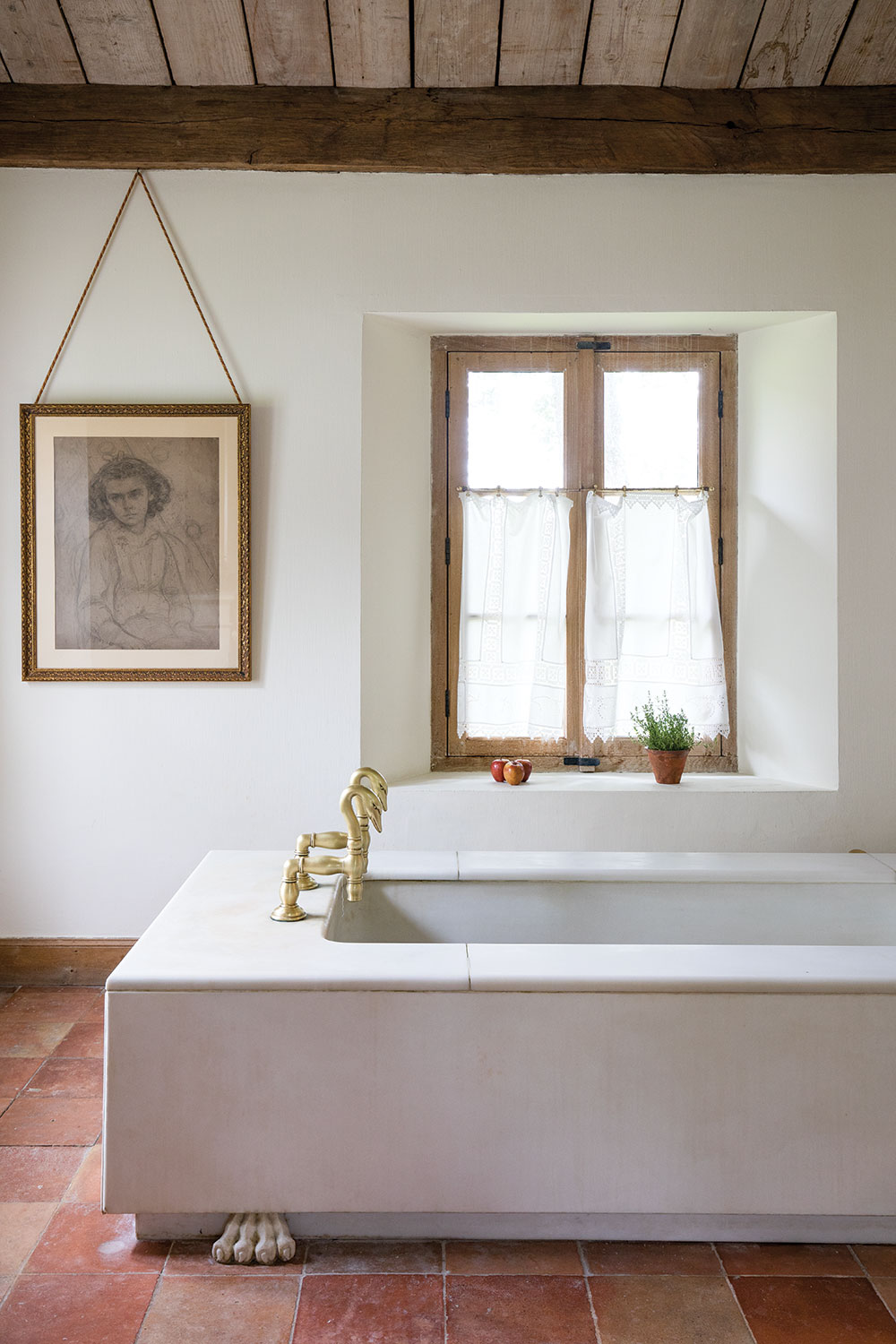 Three apples, a pot of herbs, and a footed marble tub for kaolin baths—such French touches—grace this treatment room at the spa Ferme Thermale. 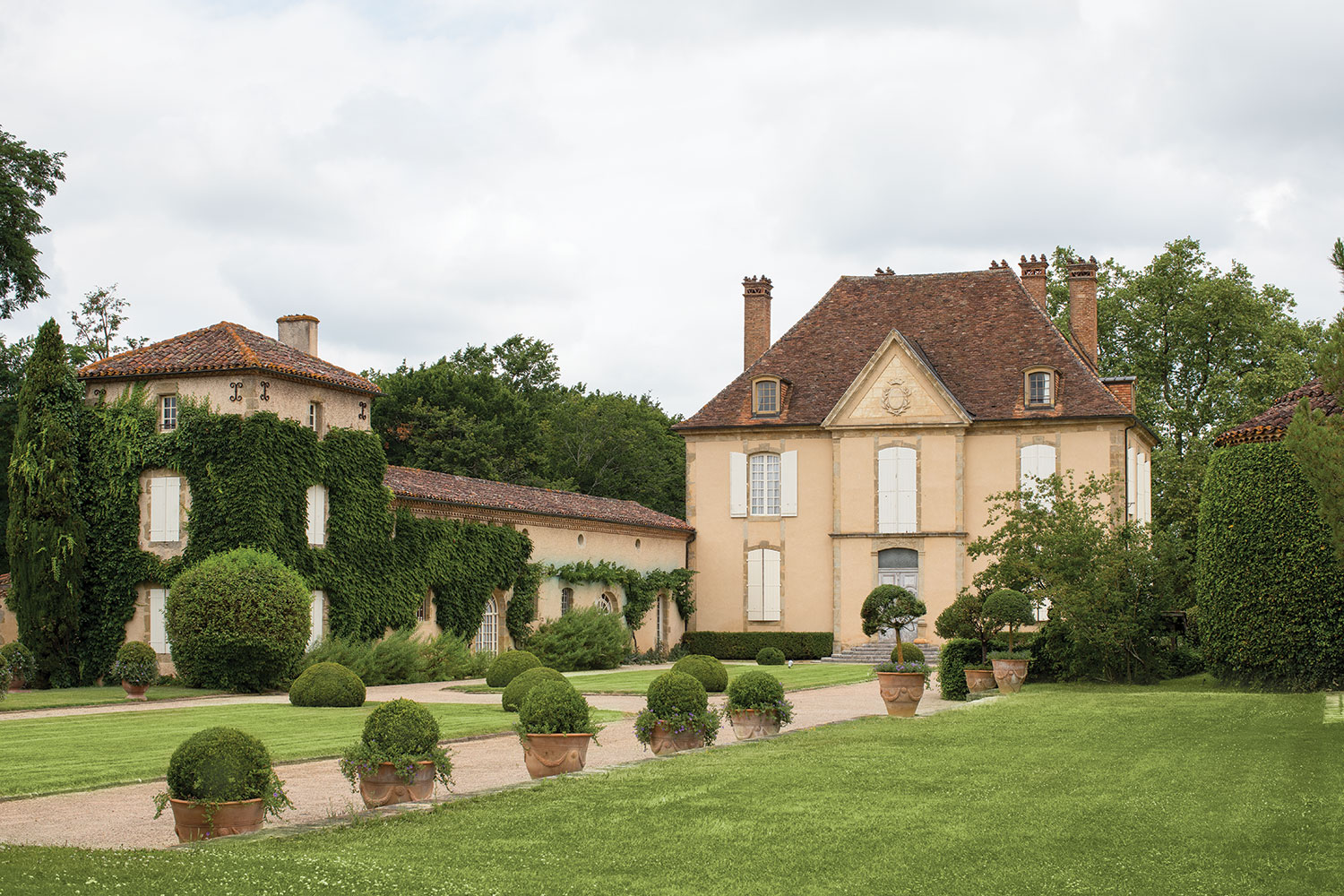 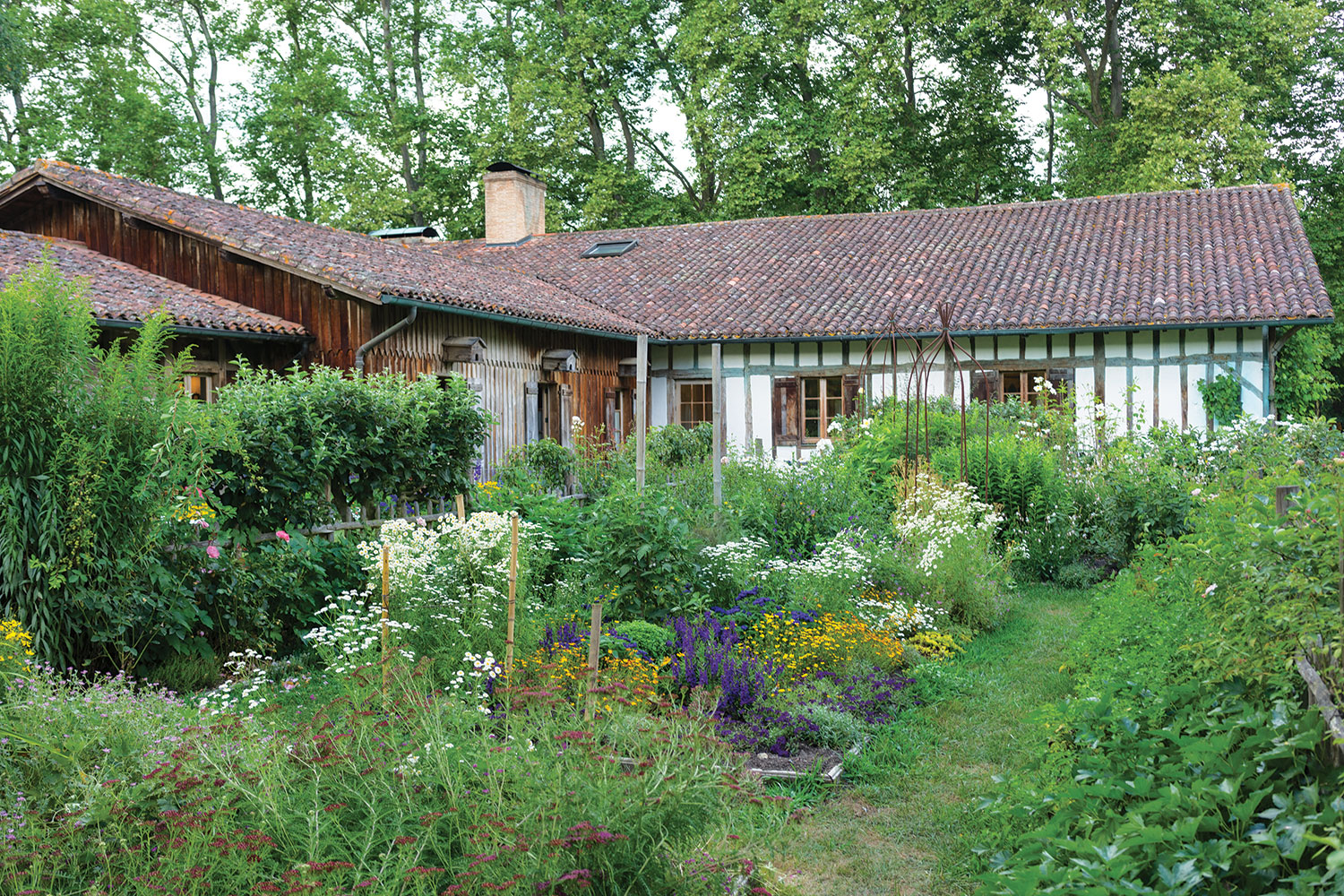 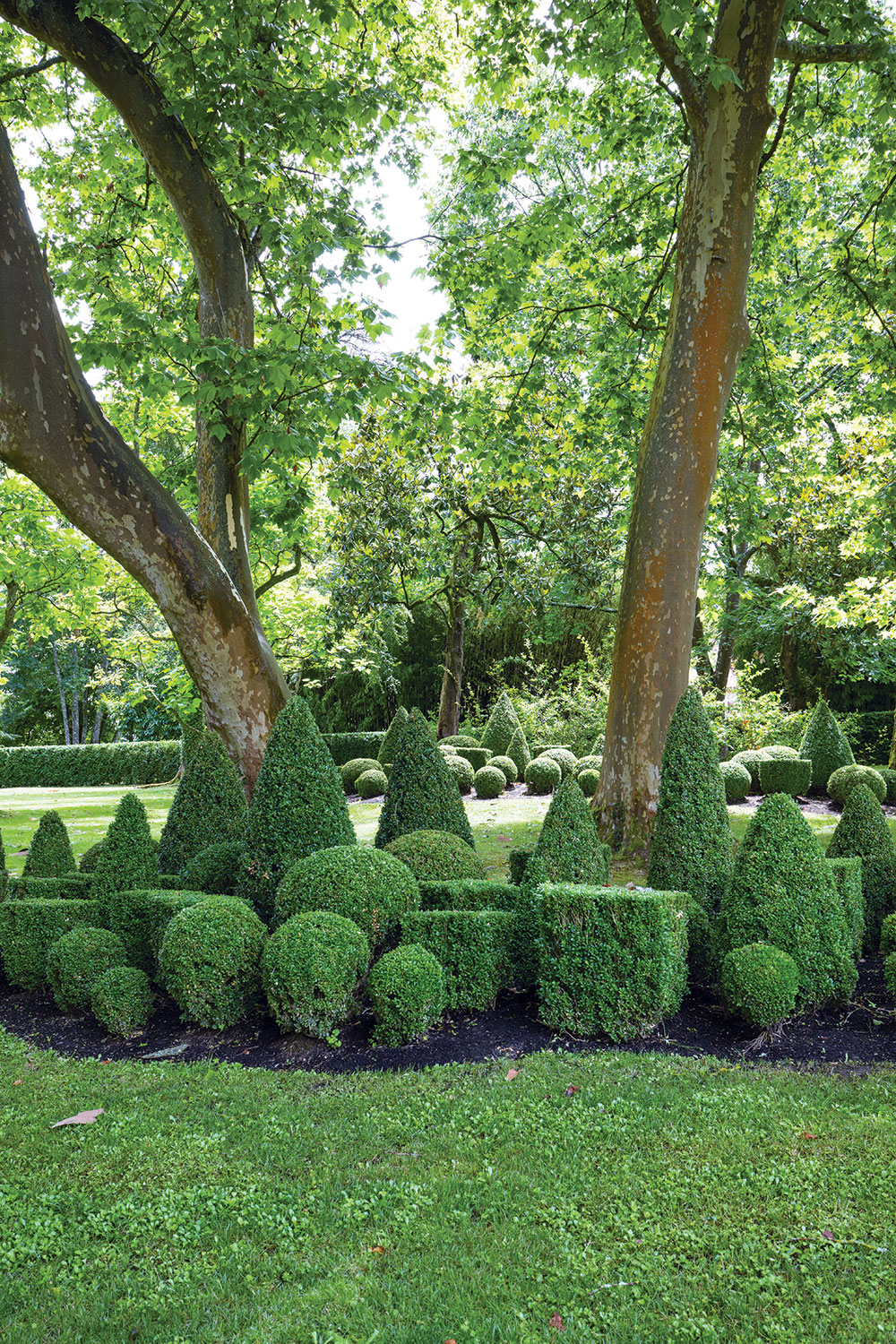 Clipped and shaped boxwoods are gathered in groups around the property. 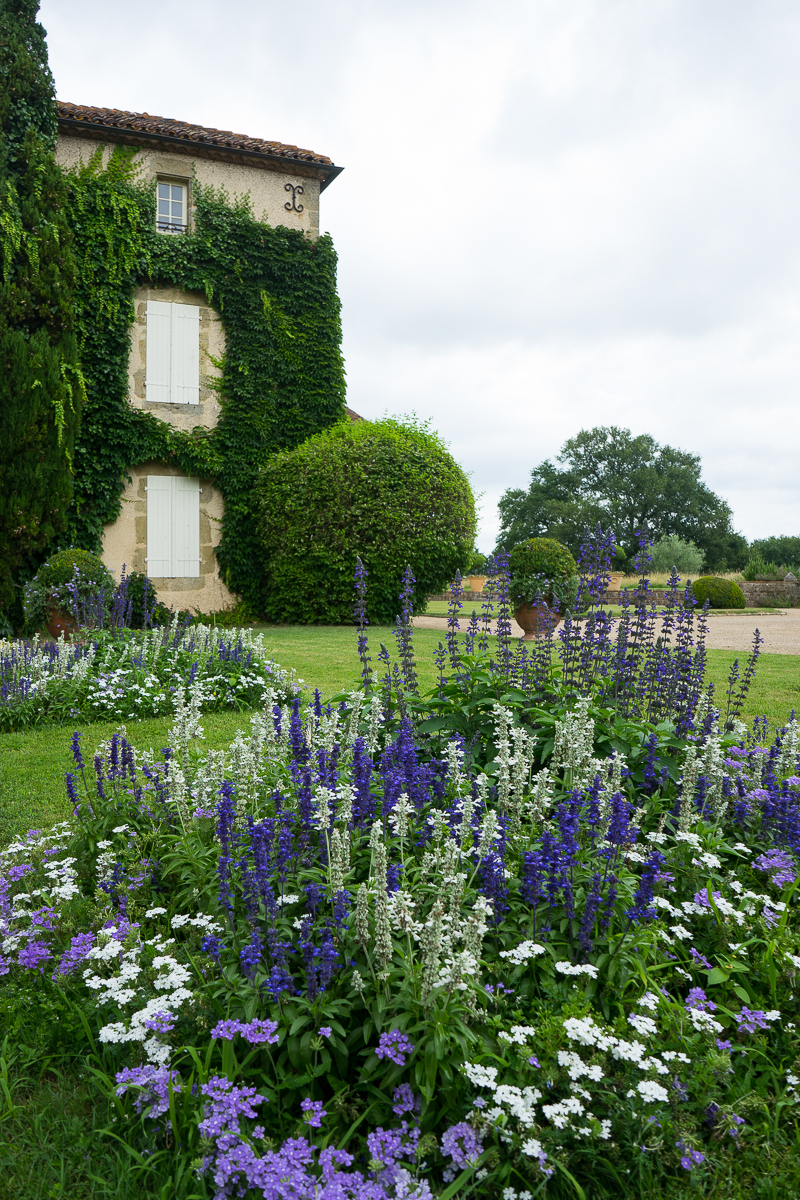 "The instructors encouraged us all to find beauty in imperfection, such as dead lichen-covered branches, as well as in the everyday-ness of apricots and other bounty of the region."–MARGOT SHAW 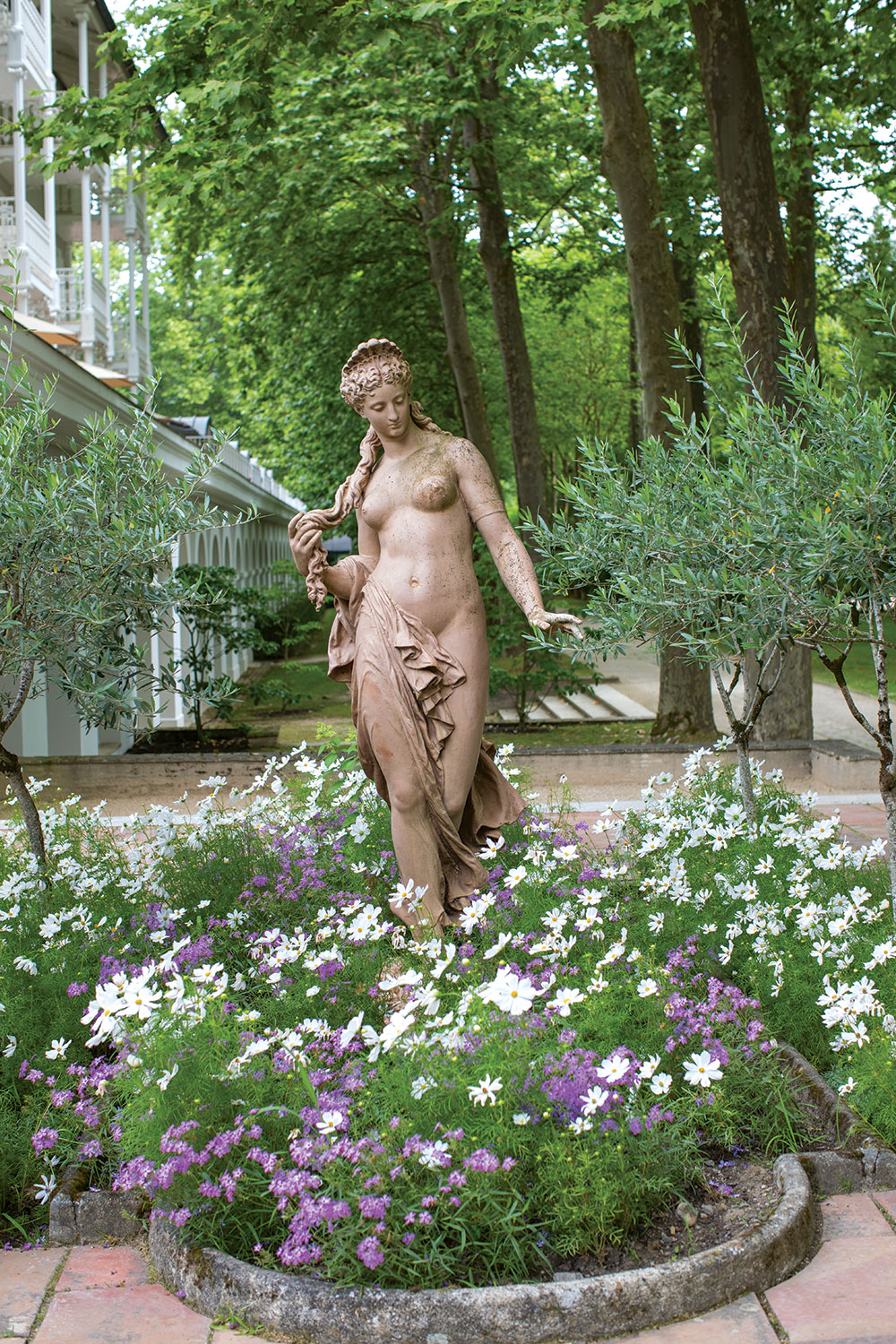 A 19th-century statue seems to say to the flowers, “That’s perfect; just like that.” 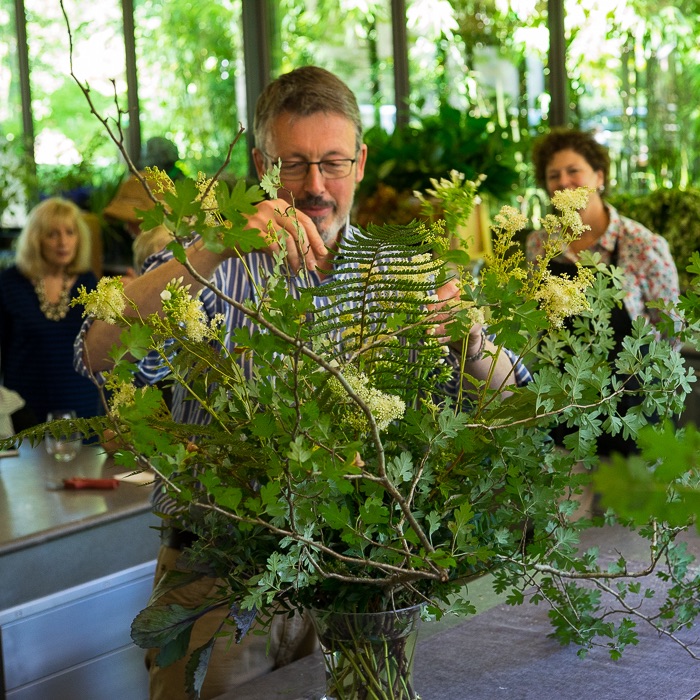 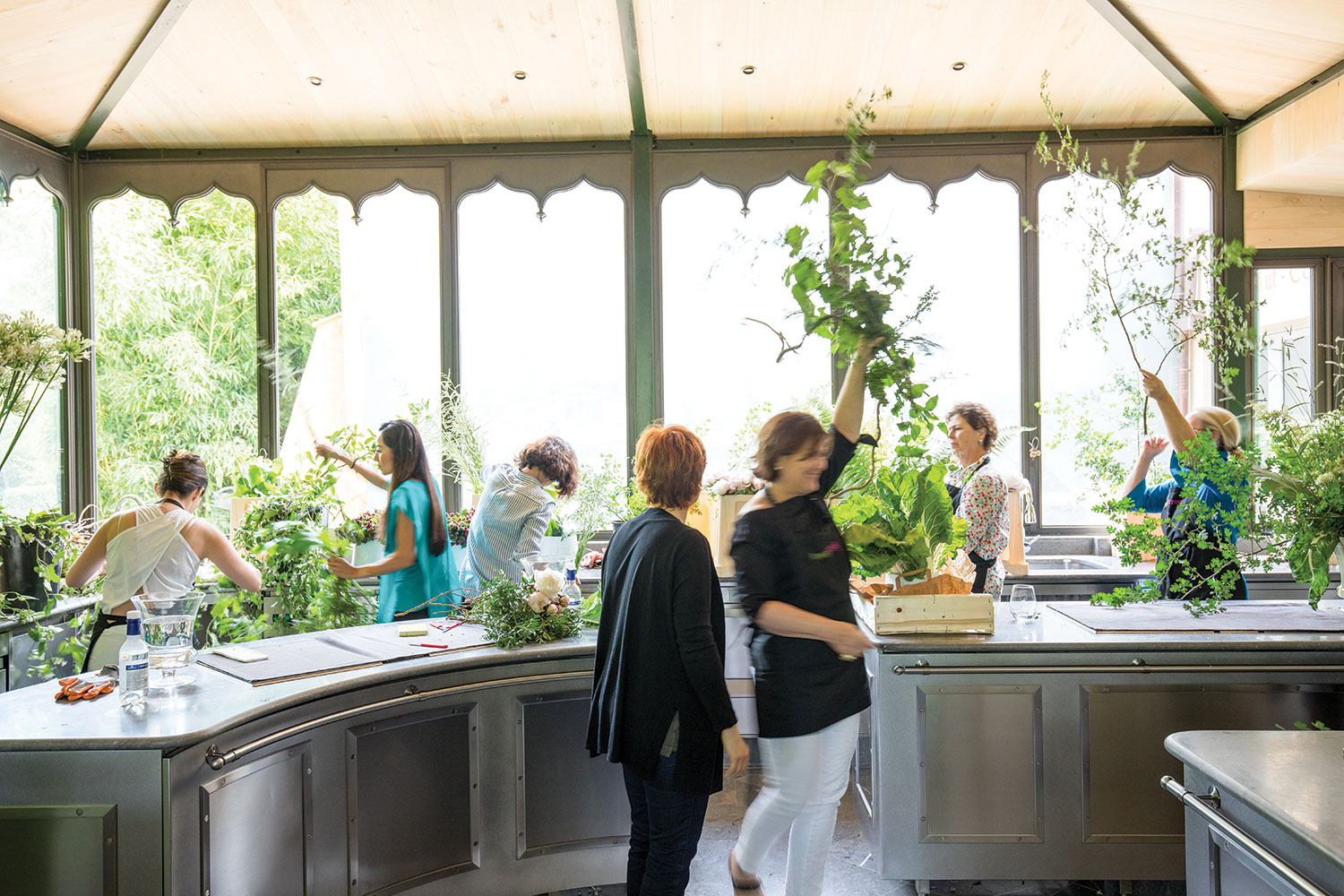 The class gathering their materials 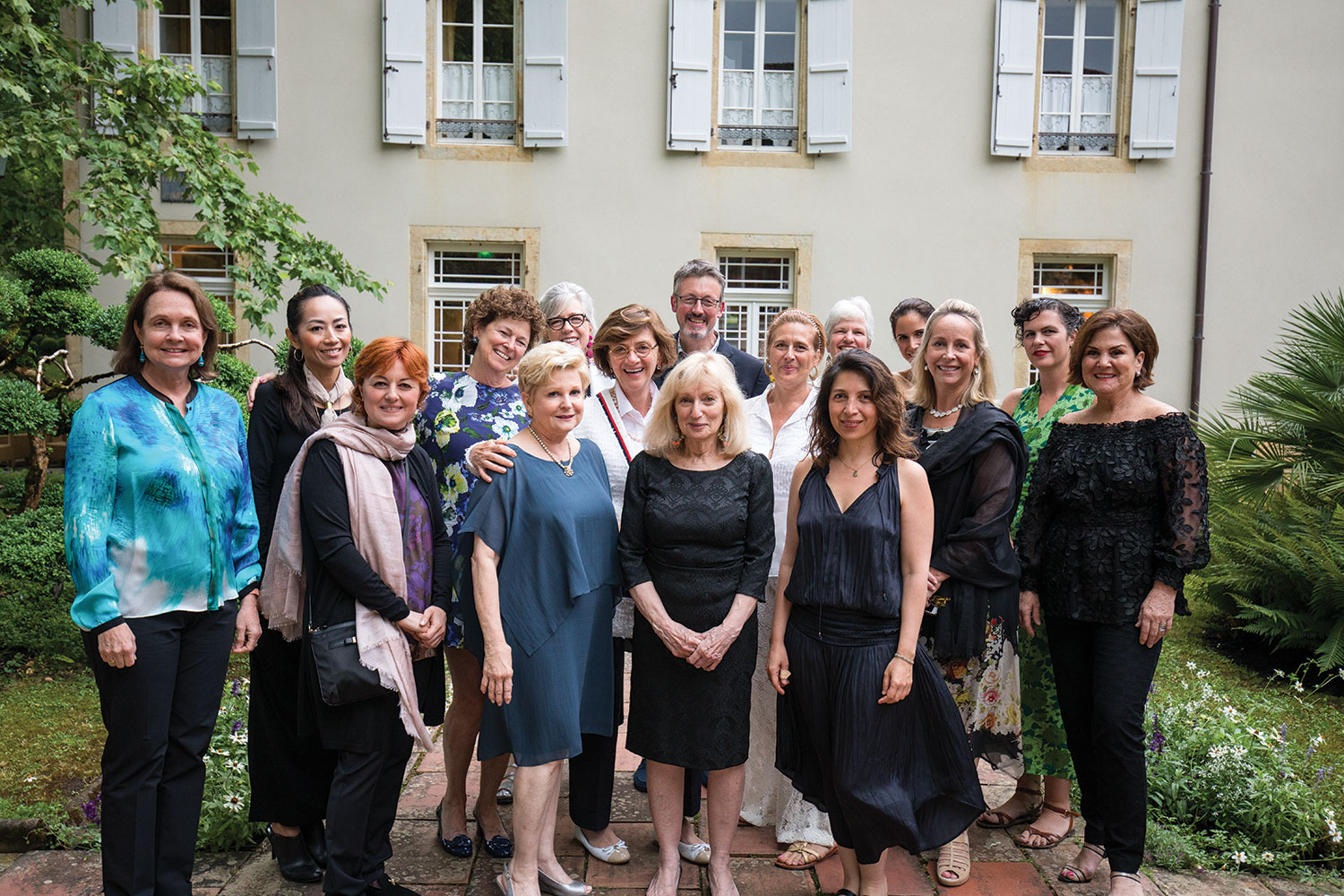 The group on the night of the “The Last Supper” (missing Tortu, who had to leave early to flower Fashion Week in Paris) 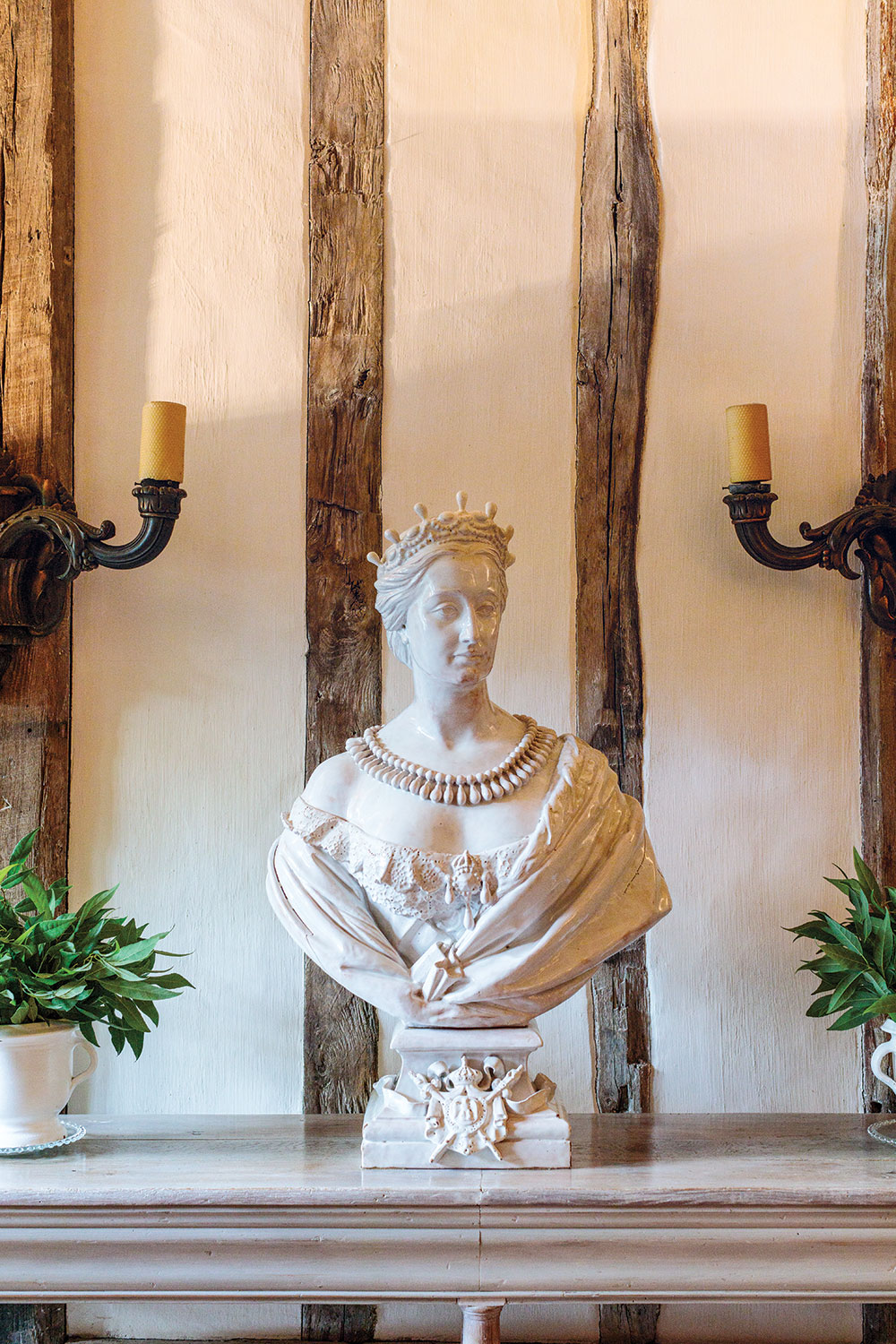 A bust of Empress Eugénie in the Ferme Thermale spa

More from These Instructors