Sometimes, in life, one has a brush with greatness. Such was my privilege when I attended the FlowerSchool New York class led by the legendary Christian Tortu. The man who brought us the soigné French hand-tied bouquet, improbable arrangements incorporating branches, grains, and grasses with gorgeous, highfalutin blooms, and even must-have signature home goods such as fragrant candles and vases available in his upscale, eponymous boutiques, is actually very down to earth—literally.

Tortu gave us a brief bio, telling of his early life in the French countryside town of Anjou on his parents’ farm, where he walked with his grandfather, discovering the infinite possibilities and messages found in nature, and created arrangements from his mother’s cutting garden. He told us his first sale was a humble bouquet purchased by a pair of nuns he encountered who were in search of altar flowers en route to Mass. A clear vocation, I’d say.

After working and training in local flower shops and continuing to study the natural world at his back door, Tortu headed for Paris, finding work with an established floral designer who exposed him to the likes of Chanel and other luminaries. Eventually he struck out on his own, and in lieu of returning to his country home, Tortu arrived at the somewhat subversive style of bringing wild, natural plant materials from the country into city-chic bouquets. This enraptured the sophisticates of the City of Light. And the rest, as they say, is (flower) history.

The first thing I noticed about the class was that in attendance were several masters of the floral game in their own right. My classmate, designer and author Ariella Chezar, shared with me, “If I have one major influence, it would have to be Tortu.”

Next, I noticed that Tortu’s chosen plant materials (all green) for our design were already perfect arrangements just sitting in their buckets waiting for us. I was reminded of a quote I loved from his seminal book, Sensational Bouquets (Abrams Books, 2001): “Green is the color of renewal and hope, a metaphor for freshness in the collective imagination.” I couldn’t wait to hear more. He described the green bouquet in a way that we all immediately understood: la petite robe noire, or “the little black dress,” of bouquets. Leave it to a Frenchman to bring fashion into the conversation.

The master began by weaving together an all-foliage design, which would form the base of the arrangement. (Even his leafy creation was stand-alone pretty.) He then proceeded to select flowers and grasses in Kelly green, greenish white, and chartreuse to embroider into the green base. Tortu mentioned that he prefers things not to be too perfect, too symmetrical. Somehow, with his genius, he created a perfectly imperfect, lushly asymmetrical design that drew unreserved admiration from the whole class.

More from the Class and Christian Tortu 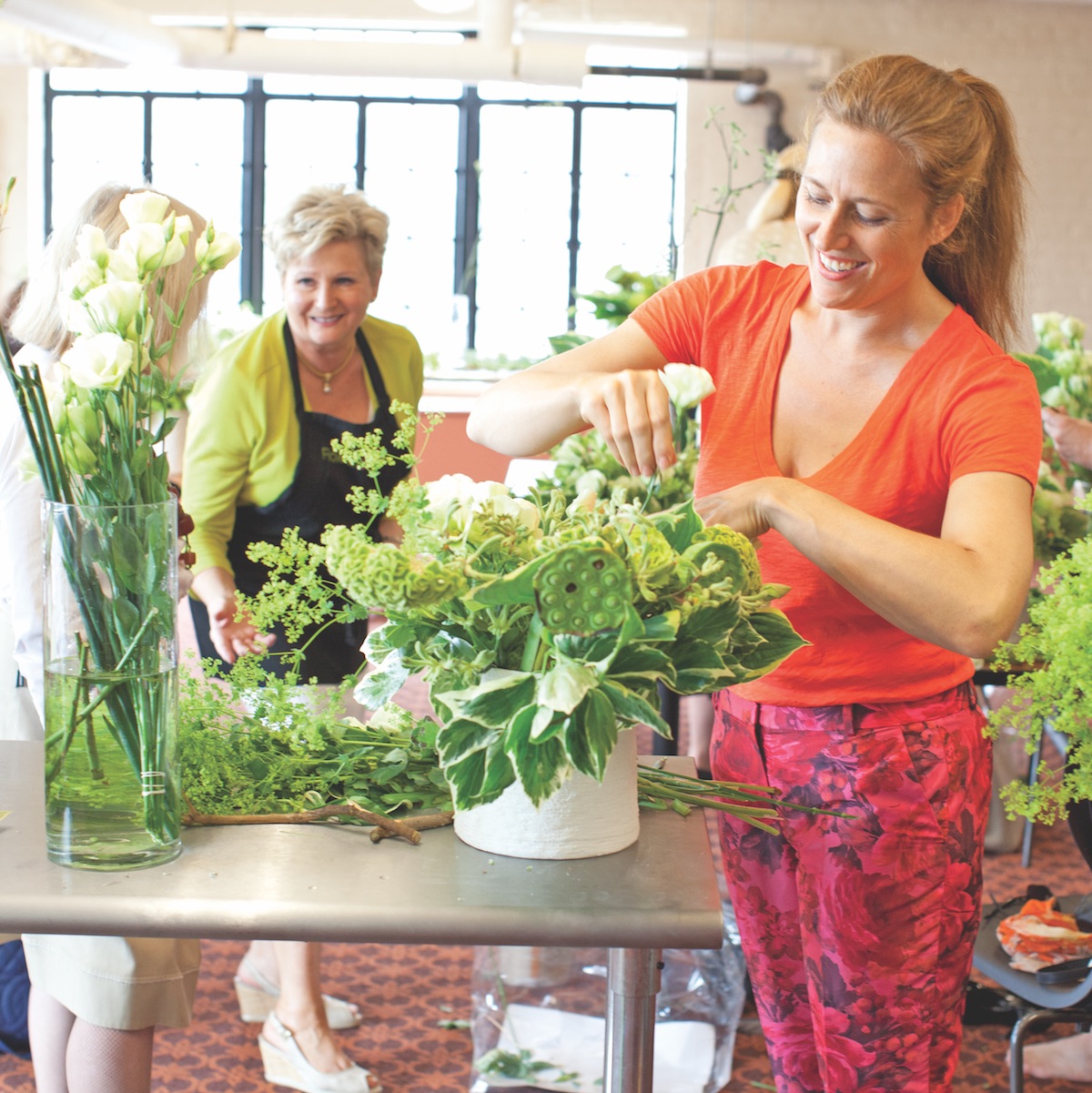 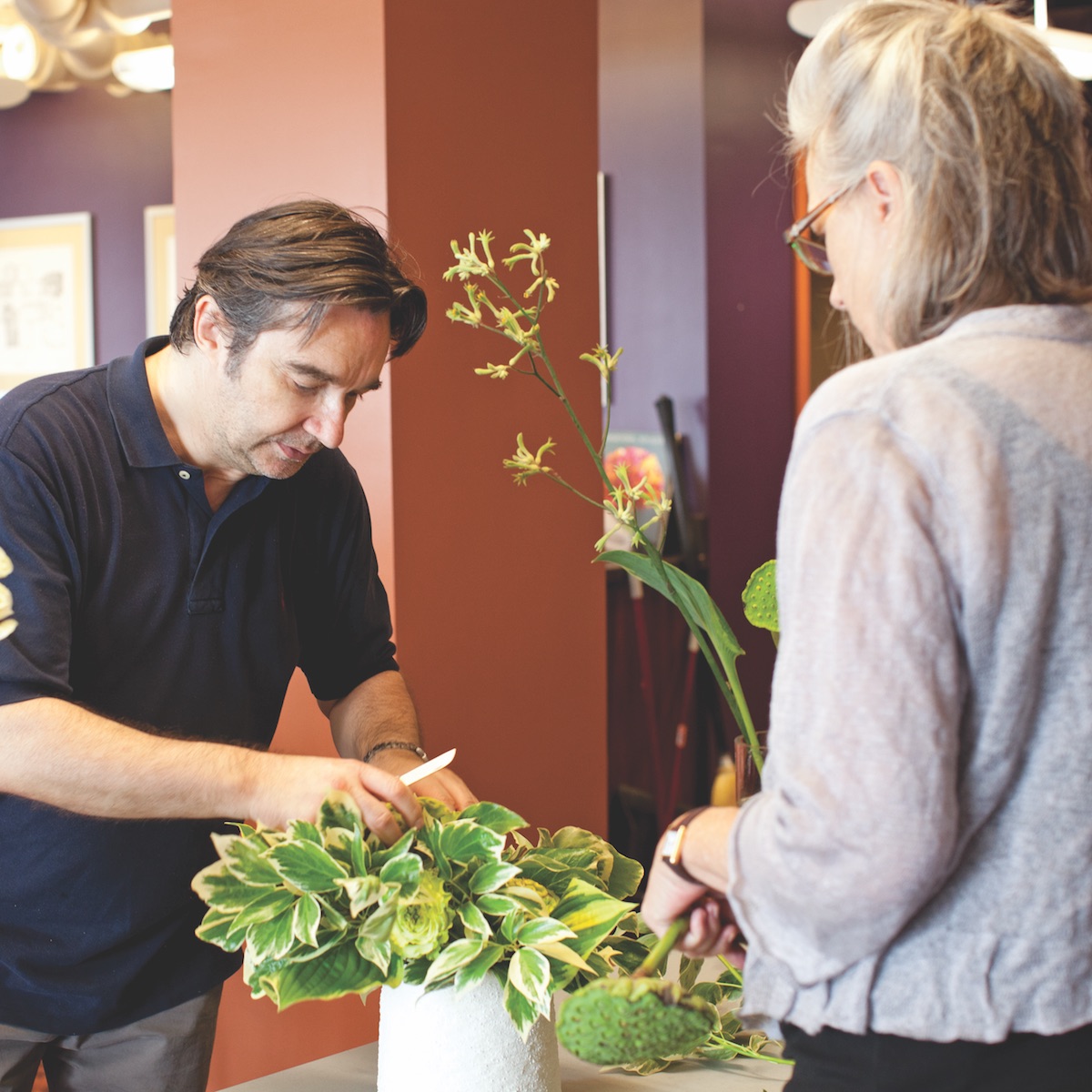 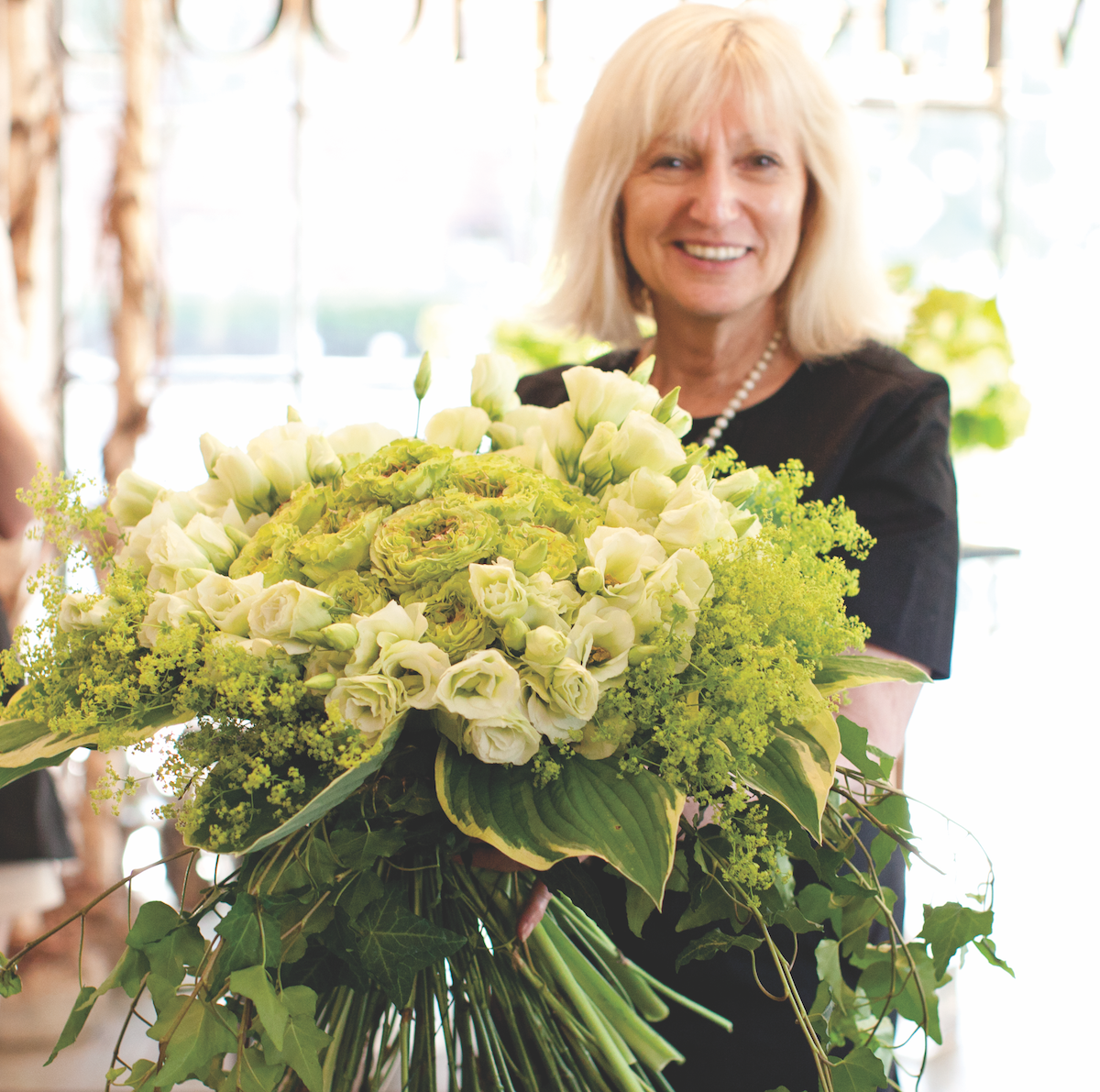 FlowerSchool New York Director Eileen Johnson was indeed astonished—as Tortu said she would be—at the massive hand-tied bouquet he created for her with leftover flowers. 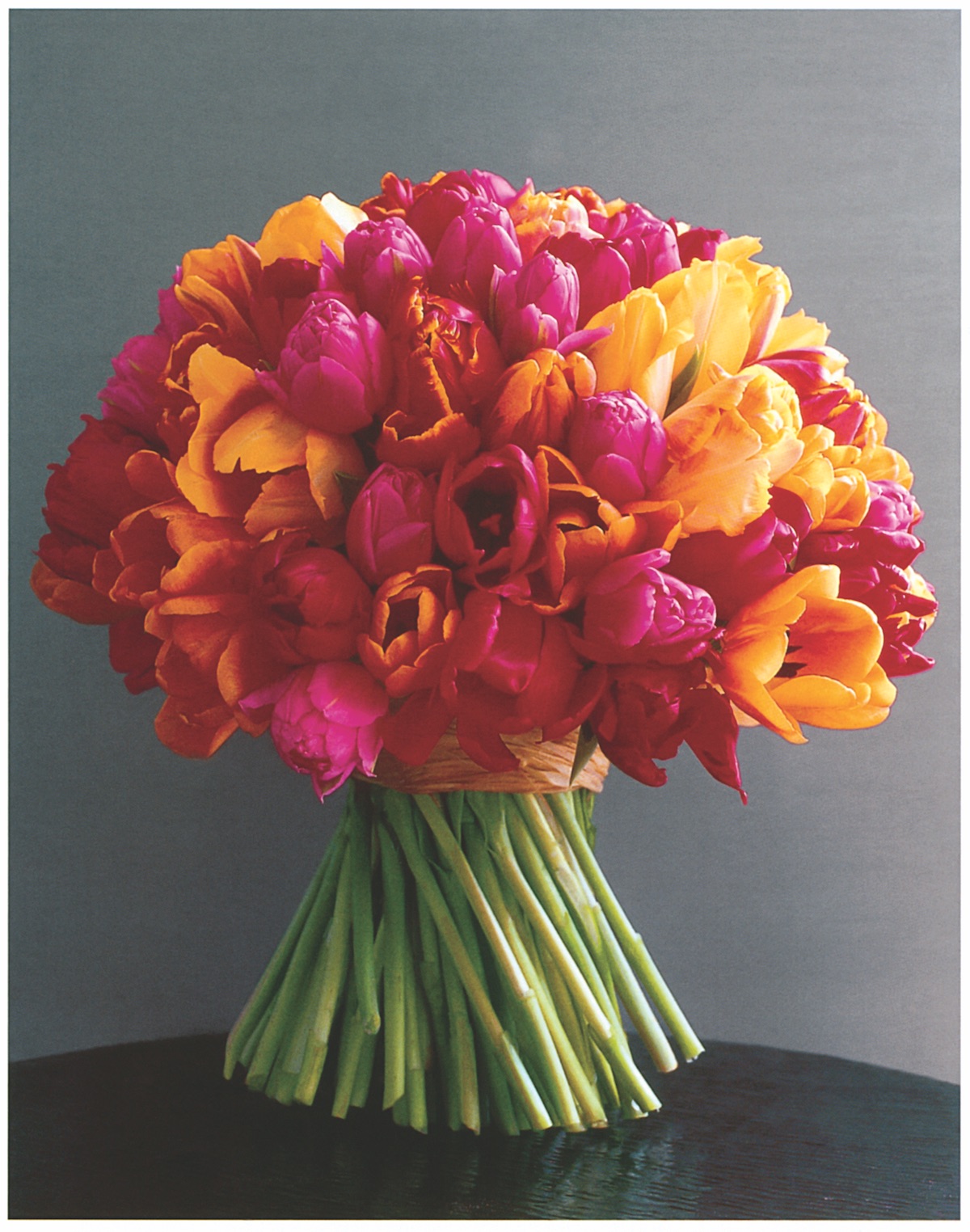 This round bouquet of tulips tied with raffia graces the cover of the designer's book, Sensational Bouquets (Abrams Books, 2001). 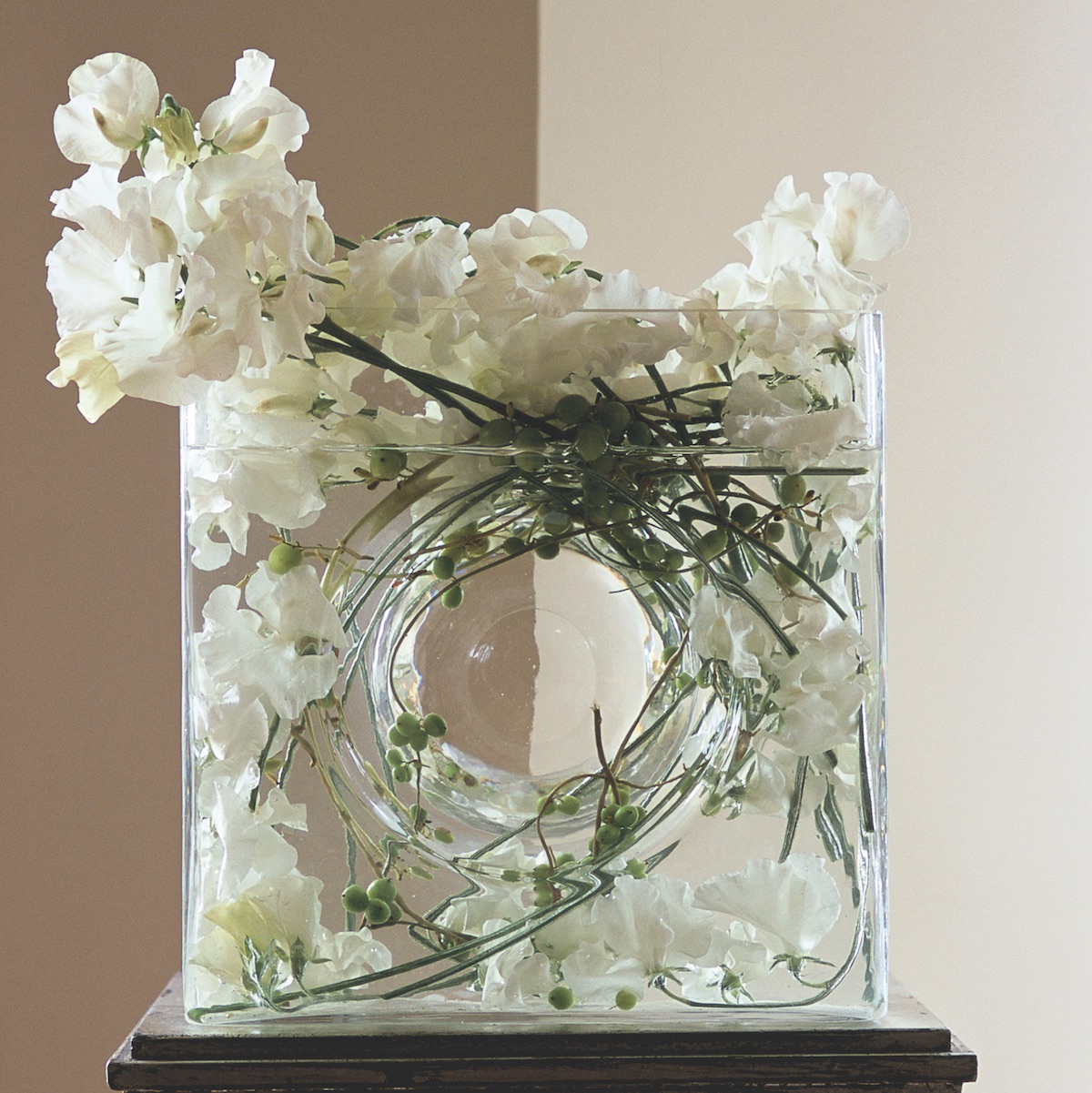 For his book, Sensational Bouquets (Abrams Books, 2001), Christian Tortu created this arrangement of white sweet peas in a clear “Diabolo” vase, which is part of the designer’s collection of vases. 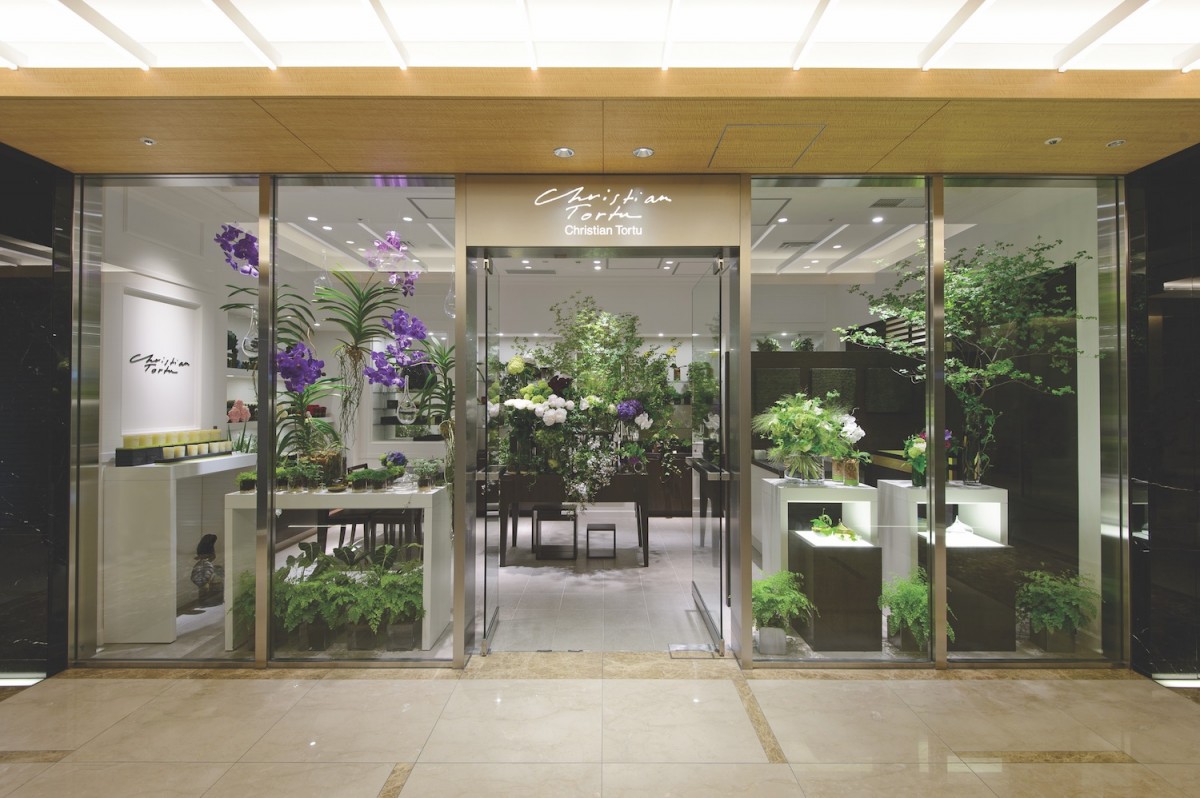 The entrance to the Tortu's shop in Tokyo

But the beauty of Tortu and this setting was that he was so approachable and winsome. None of us were too intimidated to ask for help. And ask we did. Then, after a flurry of flowering and fun talking amongst ourselves, the time came for the critique and photo ops. We all stood straighter, and each listened with rapt attention to the teacher’s gentle, helpful comments. I watched as the other students smiled with pleasure and bloomed at the encouraging words and individual attention. Like his beloved color green, Tortu brought hope and freshness to the collective imagination of the class that day. Sensational indeed.