Jan ter Haar wasn’t expecting to be mesmerized by the Maine seacoast. In fact, when he suggested a coastal escapade to his wife, Ann, he was thinking more about checking a previously unvisited state off his bucket list and less about experiencing a life-changing encounter. But before they knew it, the two were making inquiries at a rental office. After one season spent experiencing the drama of watching the high seas, they sent out feelers to purchase a home of their own. After being shown 25 houses, the couple found Rose Cove in 2007.

As a location, Rose Cove was everything they craved. Foremost, it overlooks a particularly scenic chunk of jagged shore where sailboats glide majestically past. Practically speaking, the house stood empty for a year and a half prior to their occupancy. Not only did it beg for renovation, but also everything about the house turned its back on the ocean, with no doors opening to the water and a floor plan that ignored the location.

Wanting something much more outward-bound, the couple mapped out changes to maximize the view, hired contractors, bought a bed and garden furniture, and “spent the first summer camping out in the house,” Jan says, summing up their initial introduction to Maine homeownership. In truth, they loved every minute.

Jan is Dutch, born with a heavy dose of gardening in his blood, but Amsterdam was doing nothing to satisfy his need to bond with the land or make it bloom. Rose Cove was full of potential. Because 30-foot waves crashing on the rocks below the property make wind an issue, previous owners had created a walled garden that is secluded, hunkered down, and magical. The garden also serves to protect tender plants, vegetables, and fruit from the fury that can blow off the open water. However, the walled garden didn’t really capture the majesty or magnitude of the location. And that’s where Michael Walek came in.

Michael is a professional gardener who specializes in coastal properties and their unique opportunities. With the trained eye of a watercolor artist, he brings composition and color to the table. Case in point: He took one look at the walled garden and realized that it blocked any glimpse of the horizon. Although the seclusion it offers is pure romance, he saw a way of adding to its allure by installing a corridor capped by a moon gate that frames the view.

Working with the garden itself, Michael’s challenge was to thin out and update its contents with an emphasis on the espaliered fruit trees that thrive in that environment, which is a full zone warmer than the climate outside the walled confines. He also peppered flowers, herbs, and vegetables into the labyrinthine configuration. Asters, hydrangea cultivars, daisies, hellebores, phlox, thalictrum, perovskia, and cimicifuga all share the alcoves with edibles tossed in for continual harvest. Seating motivates the couple to spend time within its protected walls. By preserving that space, Rose Cove pays homage to previous gardeners and honors its roots.

Encased in climbing hydrangea, the walled garden is just a few steps from the house—easy distance for fetching homegrown produce for the kitchen. But beyond the moon gate and a mid-axis gate is an open expanse where the ocean steals the show. Leading to the ocean, a rill and pool take the axis outward and point toward the water. “The water features expand in size,” Michael explains, “until finally you have the vastness of the ocean.” Framed smartly in bluestone, the features add a contemporary accent, leading the eye to a vermilion, pagoda-like birdhouse.

The house now sports both a screened porch/dining area and a terrace for lounging alfresco. Michael hemmed those spaces with beds of colorful annuals and perennials. Aware that the view is paramount, he left the sight lines open, with natural sculpture and remarkable trees to anchor the foreground and direct the eye. Michael has studied what works and what does not fare so well when pitted against the extreme Maine environment, where the force of the wind sculpts the trees. In addition, inspired by Dutch garden designer Piet Oudolf, he is adding ornamental grasses to lend motion to the scene.

The garden continues to evolve as Michael and Jan work together to elevate it to new heights. More grasses are planned for the future, as are naturalistic plantings that echo the movement of the waves. Spaces are being simplified, while other plantings are in the process of maturing. Collaborating with the seacoast can be a challenge, but the partnership can also achieve pinnacles of beauty.

Designing a Garden by the Sea

Tips from Michael Walek of Artscape

Michael Walek has worked by the sea for decades, but every site presents its own set of parameters. Because Rose Cove is fully exposed, Michael began by bolstering the property’s contingent of shrubs and trees to buffet the wind and provide framework. Spruces were a raving success story. “Blue spruce looks particularly strong against the backdrop of the sea,” Michael says. Metasequoias and Japanese white pine stood strong as vertical sentinels. In moist spots, winterberry is the local hero, feeding birds with its berries that flash red against the water. “The contrast of the berry color really shows up on gray days,” Michael says.

On the other hand, junipers were a disappointment, browning where exposed to coastal winds. Given the property’s name, roses seem like a no-brainer, but they have proven insufficiently hardy to tolerate the climate anywhere but in the walled garden. Nonetheless, Michael continues to experiment.

“Using plants in multiples is essential by the sea. The setting just swallows up single specimens.” — Michael Walek

Working with flowering perennials can be dicey against the vast backdrop of the ocean. From a design standpoint, even if they are hardy enough, small plants with tiny flowers become swallowed up by the wide-open space. Statements must be broad, which prompted a ribbon of daylilies by the sea. Peonies of all types, Siberian iris, baptisia, Montauk daisies, and aconitum are all success stories, while the plumes of ornamental grasses make a strong choreographic statement.

Michael’s inner artist serves him well when selecting colors. His instinct is to find ones that complement the blue of the water. Yellows and oranges figure strongly in his palette, with red and green also liberally represented. Foliage colors are also key, including variegated leaves and blushing autumn grasses. Of course, plants that colonize to make a broad statement are always welcome. Where the view goes on forever, a sea of flowers feels like a natural. 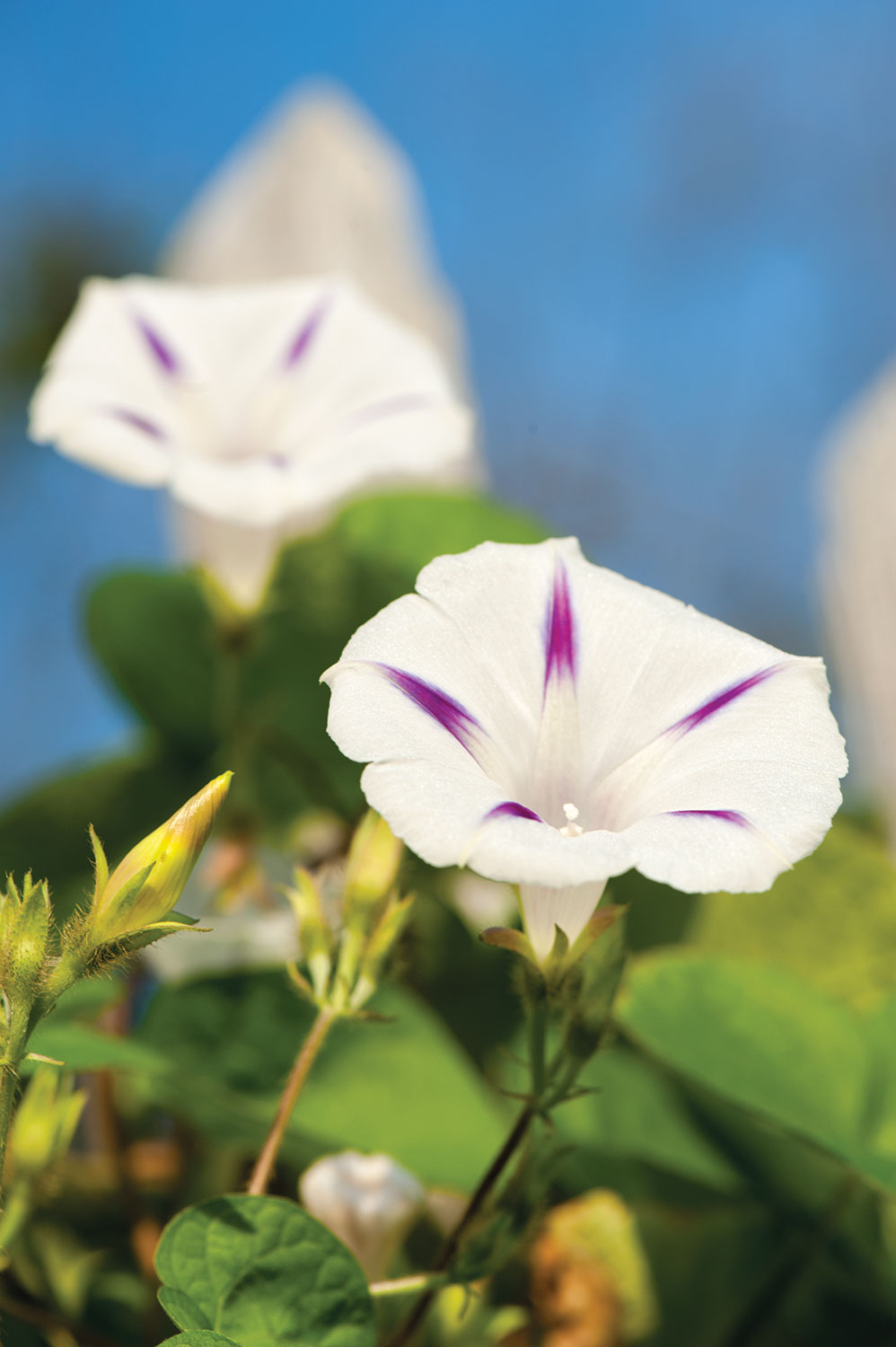 Morning glories love growing seaside, and they crawl along the wall. 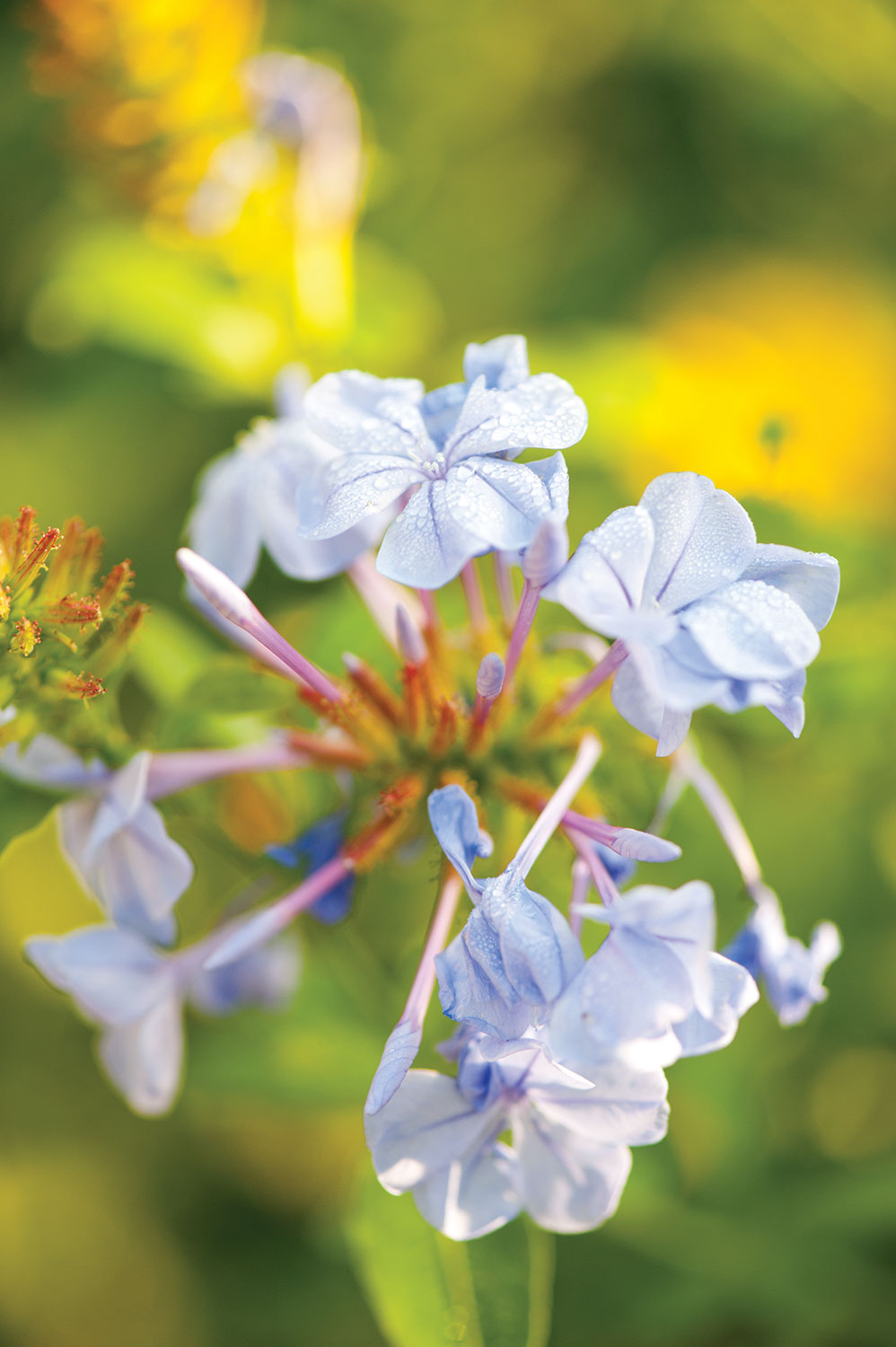 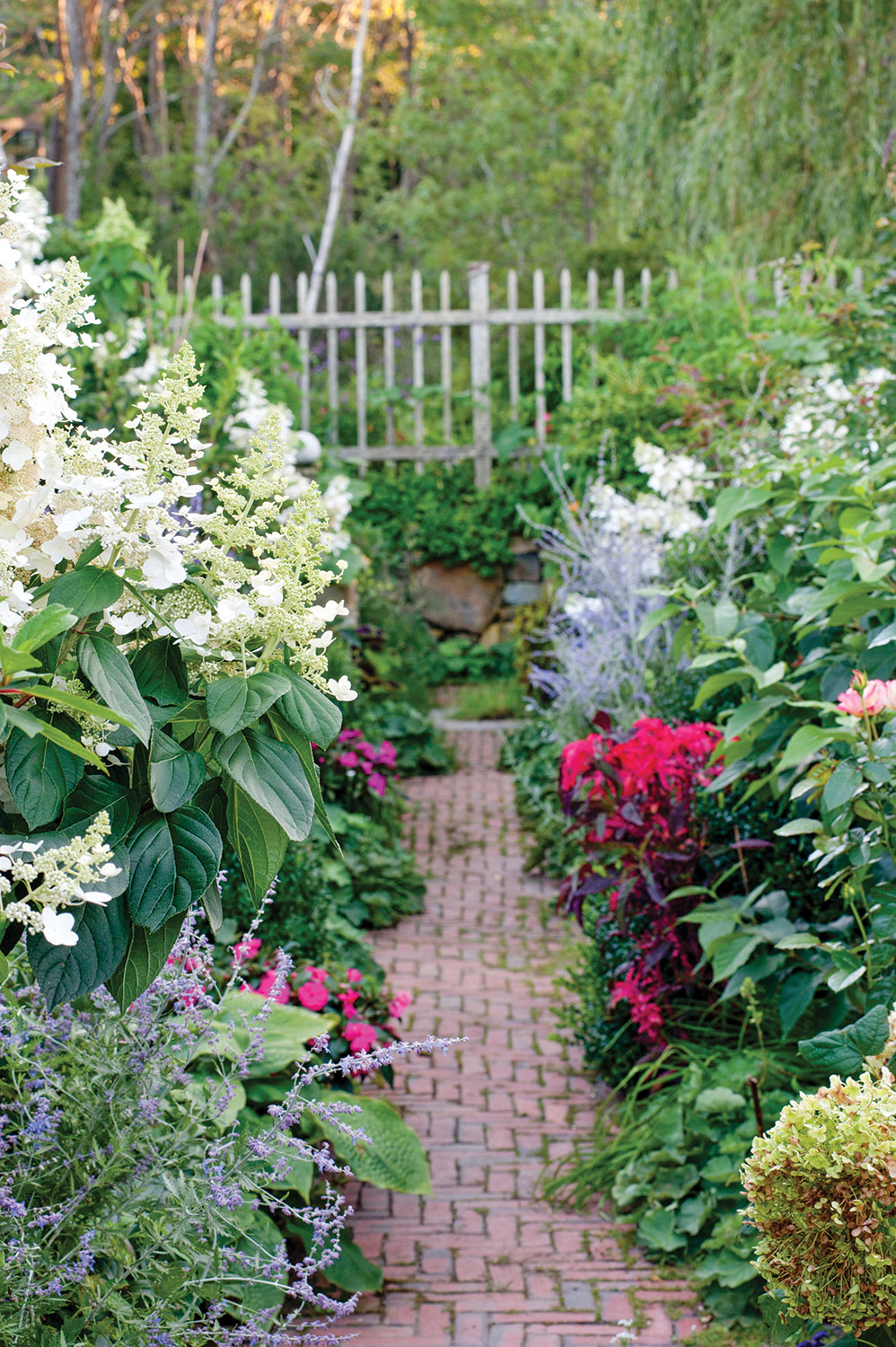 To lead the eye down the walkway in the walled garden, Michael mixed the hot reds of impatiens and Amaranthus bicolor ‘Molten Fire’ with perovskia and hydrangeas. 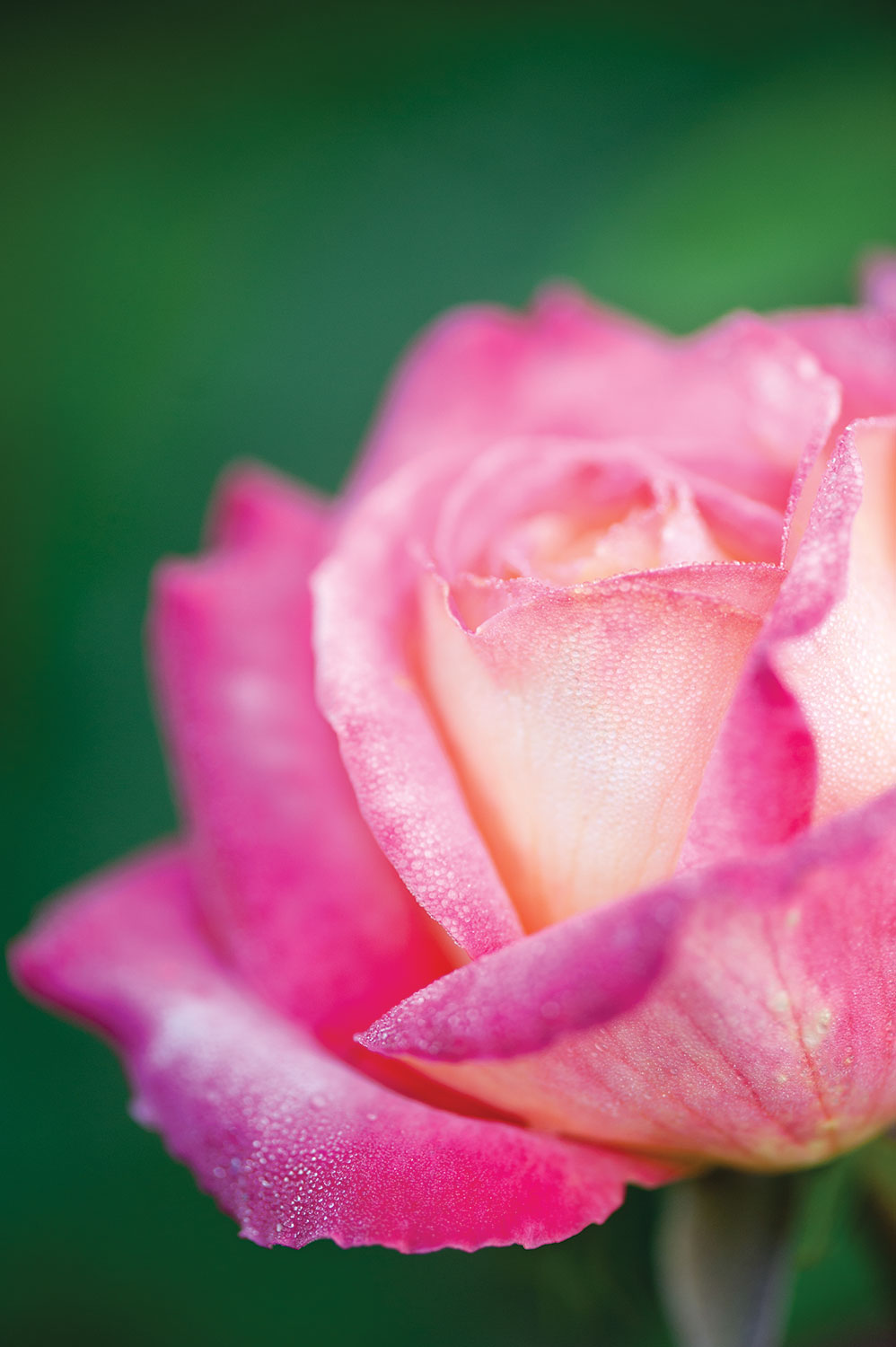 Roses are not always hardy on the coast, but the wind keeps disease in check.