The Wit & the Whim of Oatsie Charles

Set on a spit of Atlantic-lapped land, the celebrated socialite and philanthropist’s famous house welcomes back her daughter and family to continue their tradition of Newport summering 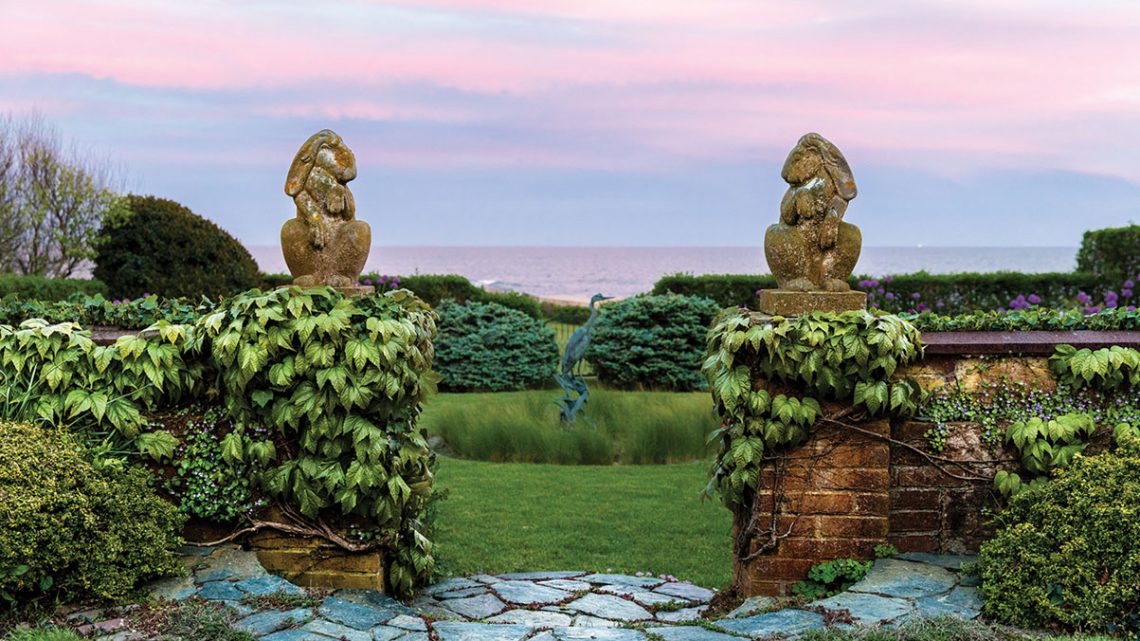 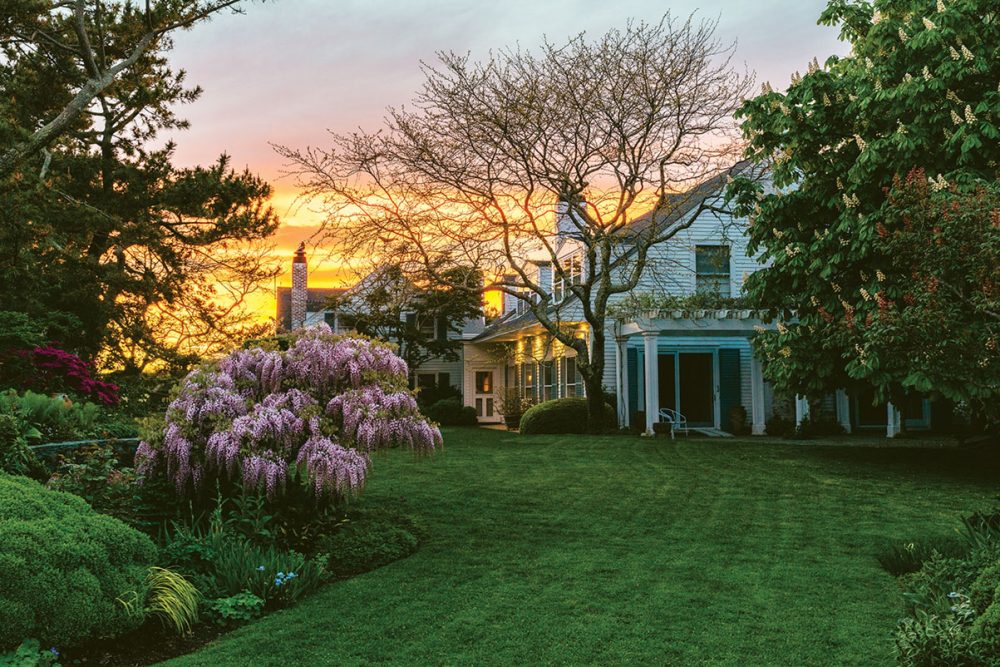 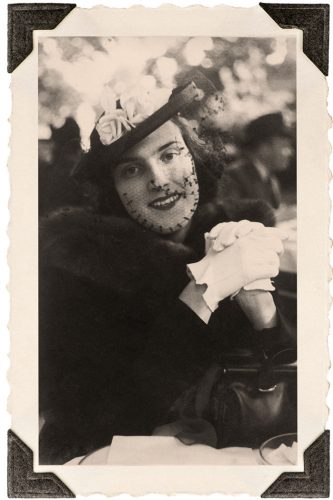 A special Newport, Rhode Island house named The Whim will happily come full circle when Victoria Mele moves back and calls it home after almost 50 years. “I came to this property when I was 2 years old,” says Victoria. That was in 1952, when her mother, prominent Washington socialite Marion “Oatsie” Leiter Charles, bought the famous estate called Land’s End. It consisted of a main house, a gardener’s cottage, an eight-car garage, a greenhouse, and vestiges of previous owner Edith Wharton’s gardens.

Designed by architect John Hubbard Sturgis in the 1860s for Samuel C. Ward, brother of writer and activist Julia Ward Howe, the sprawling shingled house on 8.5 oceanfront acres was purchased in the 1890s by Edith Wharton, who worked with architect and interior decorator Ogden Codman to remodel it and create the magnificent gardens. It was here that the two began writing Wharton’s famous treatise, The Decoration of Houses.

The property passed through several owners before Oatsie and her first husband, Thomas Leiter, bought Land’s End as an escape from the Bar Harbor scene, where “everybody went off on boats and there was no one to talk to,” said Oatsie. 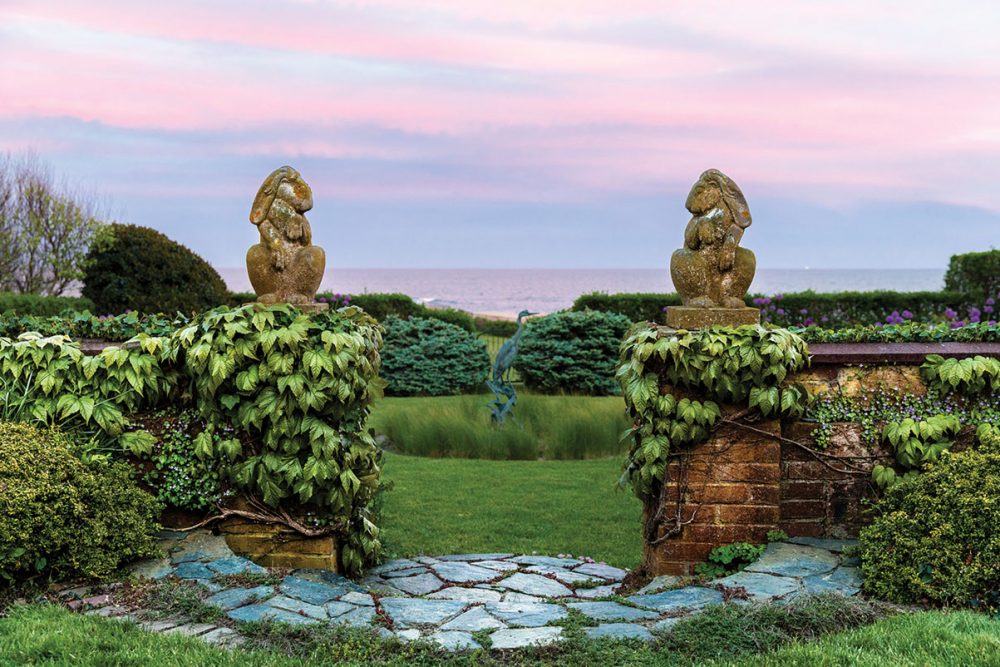 Ivy-covered walls topped with Oatsie’s favorite bunny sculptures were once foundations of a greenhouse. The heron sculpture by Walter Matia preens in a tousled grass bed of ‘Nassella tenuissima.’

Once in Newport, Oatsie plunged into the lively social scene, and by the time the couple divorced in 1954, she was a fixture in the glamorous summer colony. In 1957, after she sold Land’s End to prominent Philadelphian George Widener, she and Victoria moved into the gardener’s cottage. Eleven years later, she connected the tiny cottage she named The Whim with the cavernous garage, creating a charming complex with two libraries, entertaining spaces, and seven bedrooms.

“She had a biting wit. And her confidence! She once told me when she entered a room, she assumed everyone was thrilled to see her. And they were! What she also taught me was, it was not about how much money you had but whether you were interesting.” — Nick Mele, Oatsie’s grandson 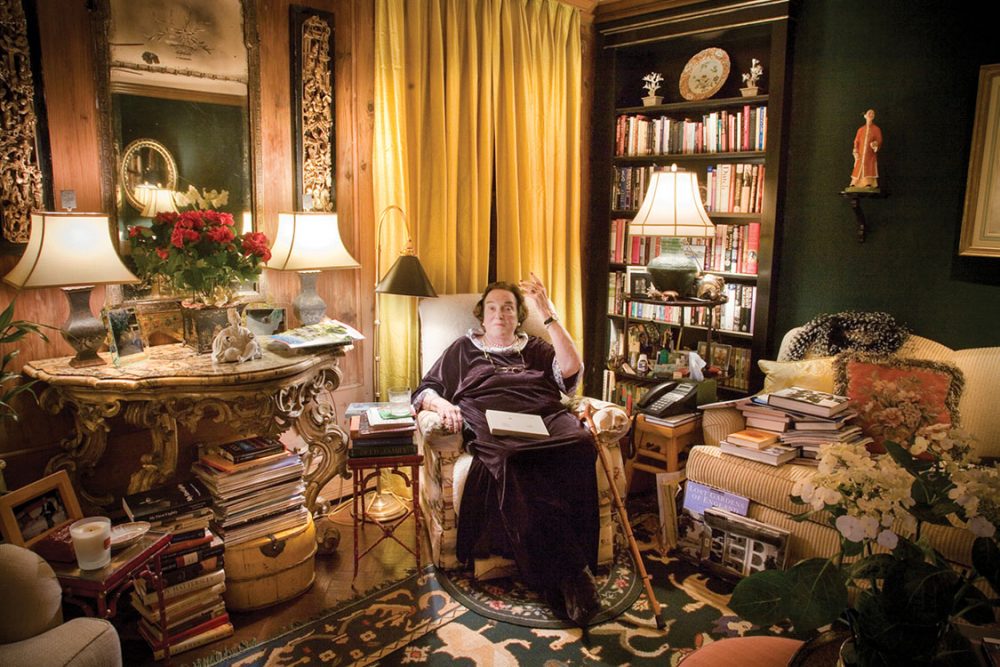 Oatsie, who adored holding court in her libraries, surrounded by favorite books

A year later, in 1969, Oatsie married Bob Charles, assistant secretary of the Air Force, and they became one of Newport’s most popular couples. After parties at night, her days were dominated by philanthropy. She was one of the founders of the Newport Flower Show and Newport’s Secret Garden Tours, was a patroness of The Preservation Society of Newport County, and was original trustee of Doris Duke’s Newport Restoration Foundation. 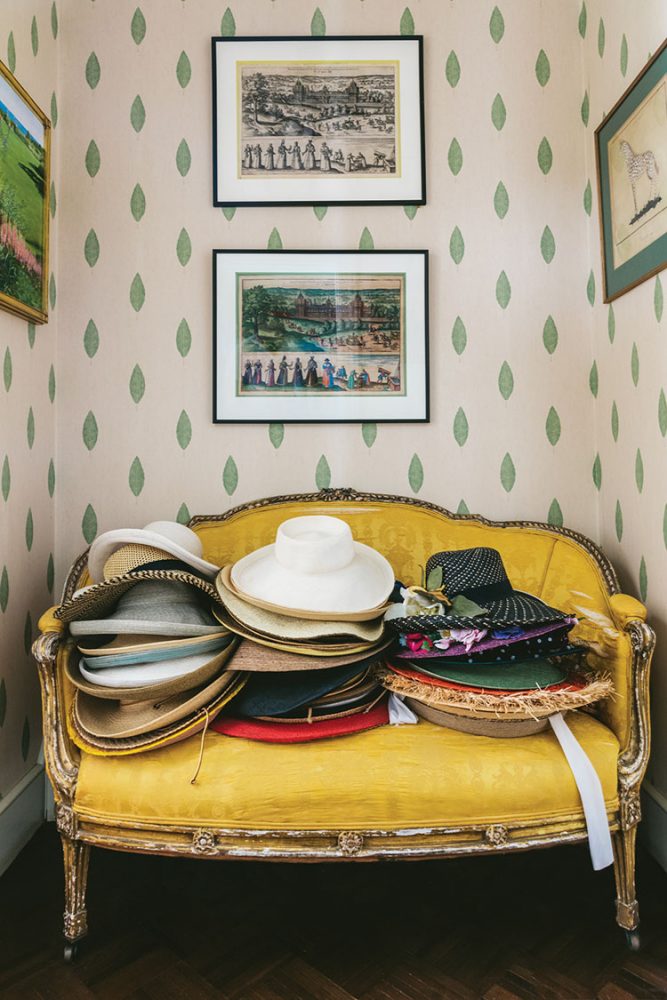 A yellow-silk French settee is piled with Oatsie’s collection of hats. 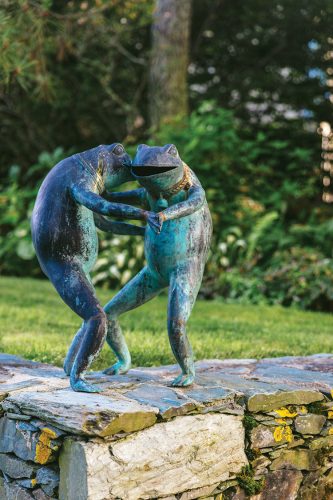 Oatsie said this sculpture was Wiggy Brown, her gardener, dancing with her on the wall.

“At home, she put flower beds and sculpture in the original foundations of Wharton’s greenhouse that blew down in Hurricane Carol in 1954, and she designed steps down to lower gardens that united the scheme in a major way,” says horticulturist Jerica Michaud, who oversees the gardens.

“I never saw her on her hands and knees, but she knew what she wanted and had talented help like Wiggy Brown, of the local landscaping family T. J. Brown, who was always wandering around. Eventually, the gardens had a little bit of everything, because she liked unusual plants.” 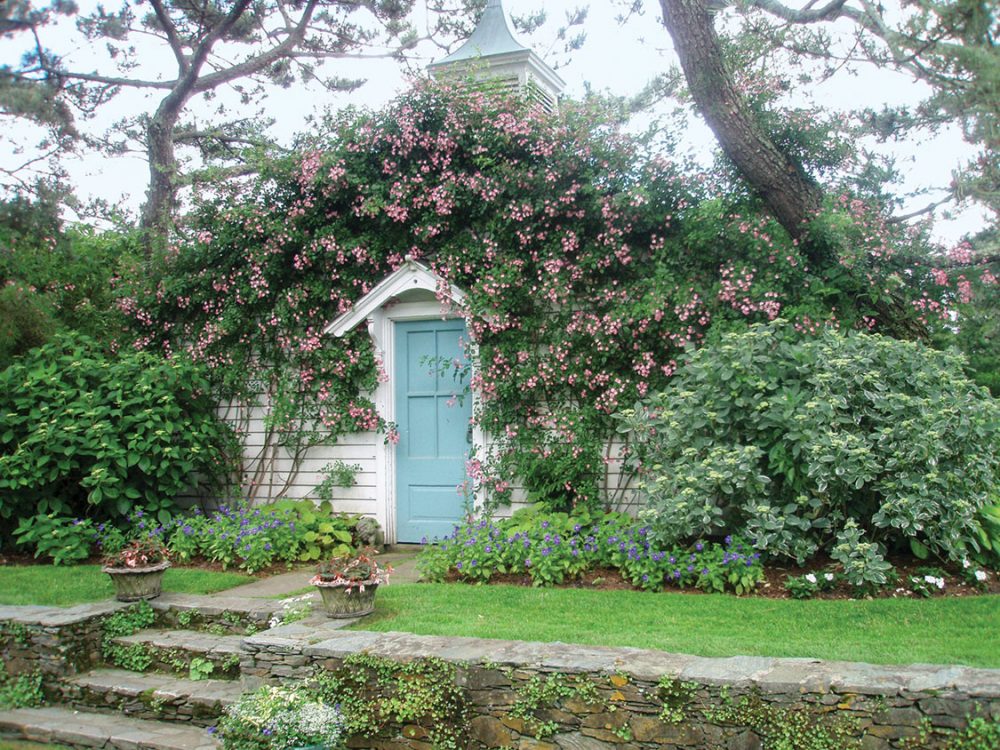 The garden shed shows off a romantic caplet of ‘Evangeline’ roses.

If summers overlooking the tempestuous Atlantic were exciting and fun, Washington’s whirlwind dominated her winters. A lifelong Democrat, she frequently said that she “would rather party with the Republicans.” So it was not surprising that when Nancy and Ronald Reagan arrived in town in 1980, Oatsie was one of the first to welcome Nancy. In fact, the two enjoyed a lifelong friendship she described as “love at first sight!” 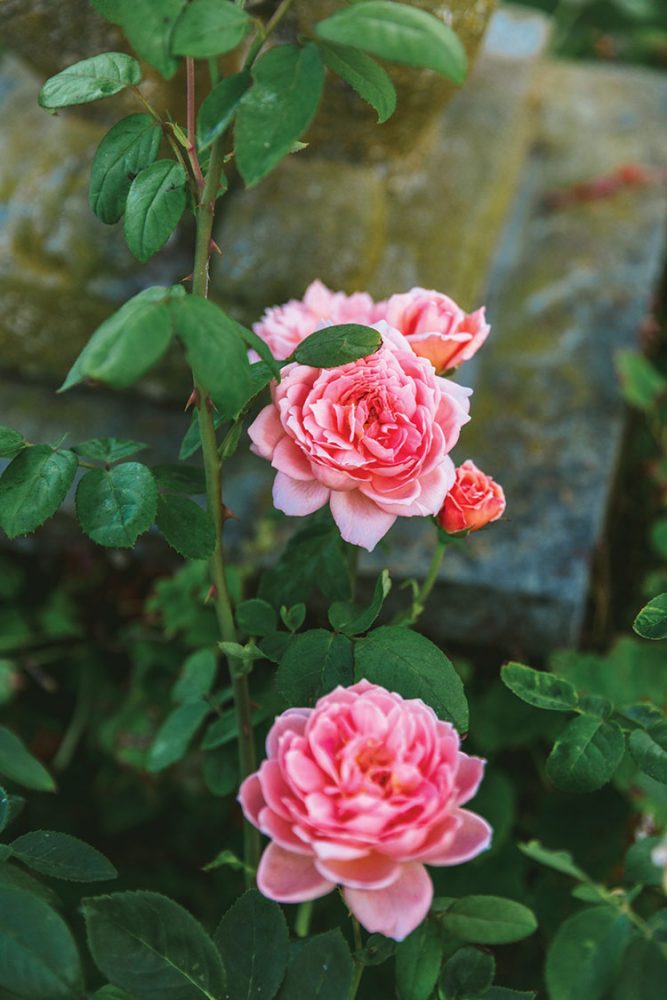 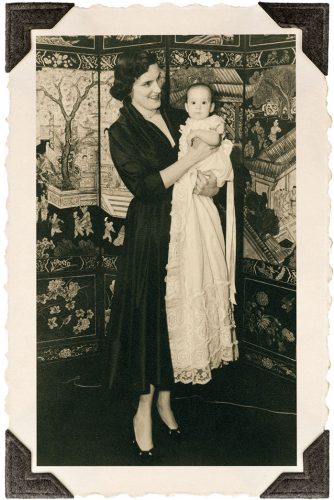 Oatsie holds 6-month-old Victoria on her christening day in 1950.

Prince Charles enjoyed regaling her with plans for the gardens of Highgrove, after she had greeted him saying, “Prince Charles, you are one hell of a prince!” Ian Fleming was also a great friend and was grateful to Oatsie for telling JFK that she was currently reading one of his books.

When Kennedy later named Fleming his favorite author in a Life magazine interview, the writer’s work shot to the top of every best-seller list, and his James Bond movies became blockbuster hits. 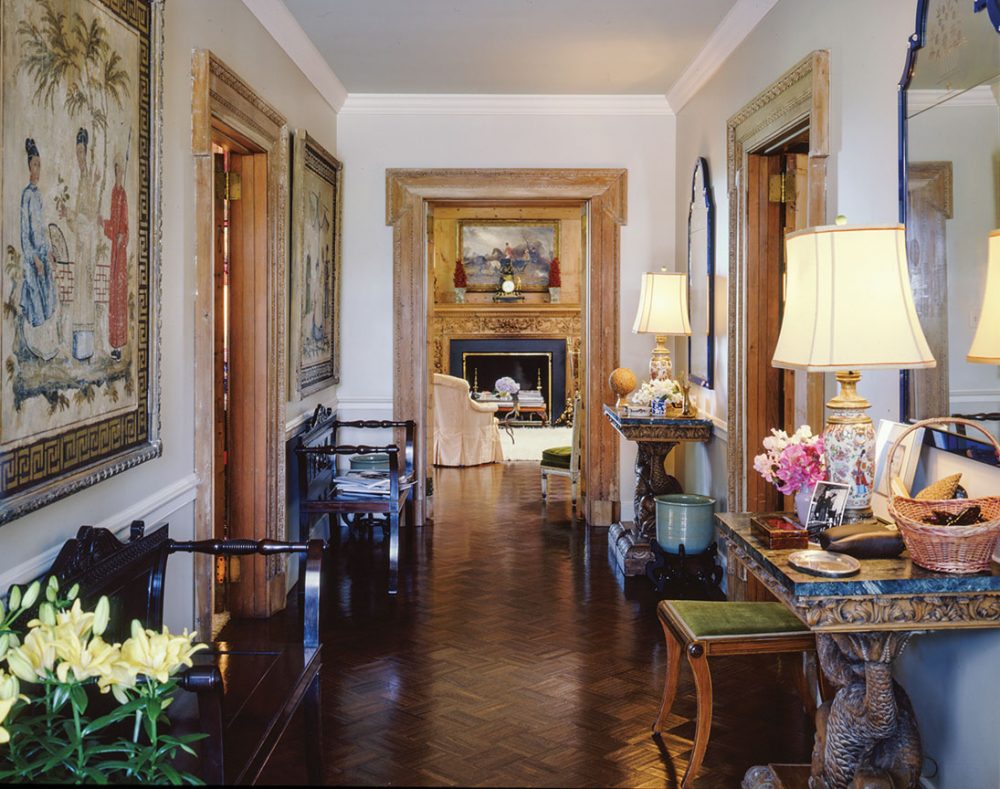 The front hall, lined with Chinese tapestries, leads to the living room.

“She was a wonderful mother. Never boring. Wherever we went anywhere in the world, she knew somebody. She often said to me, ‘You know people other people only read about in books,” Victoria recalls. “Although we lived in Land’s End next to Mother for many years, we are so happy to be returning to The Whim, where my mother’s gardens will remain exactly as she envisioned and memories of her linger in every corner of the property.”

More from the Home of Oatsie Charles

A workroom stores fresh peonies, astilbes, and lilies to be arranged for a dinner party.

The Eagle Border, dominated by a showy pink horse chestnut tree, also features Hinoki cypress, irises, and peonies. Across the field, the fanciful folly Oatsie named The Temple of Doom completes the dreamy scene, where her two grandsons, Nick Mele and Desmond Butler, were both married.

Read Next: Hillwood, An American Treasure

Marjorie Merriweather Post created an opulent haven at Hillwood, her Washington, D.C., estate, then opened it for everyone to enjoy. See more.