A botanically inclined artist applies her hand to many disciplines, creating otherworldly installations

Carolyn Quartermaine lives in a world of her own invention.

It’s a realm unbound by trends or convention, where romanticism meets modernism, the curves of a shimmering antique chandelier are juxtaposed with pictures irreverently taped to spare walls, moody cerulean blues are offset by crisp whites, and flora is all around. Through her paintings, photography, and art-directed interiors, Quartermaine lets others enter this magical place.

“It’s about relationships: balancing the minimal with the sumptuous, constantly editing to let in fresh air and give all of the elements room to breathe,” says the British creative, who defies easy categorization.

Educated at London’s Royal College of Art, she began blurring boundaries roughly three decades ago, experimenting with both paper and silk collages. Drawn to the decorative lines of old French calligraphy, she decided to transfer the ornamental script to fabric and eventually put that on a chair. Soon someone wanted to buy the chair; then others wanted yards of the patterned silk. Her career was launched, with one hand in fine art and the other in design. Later she would create minimalist floral and modernist lace-inspired fabrics; serve as a stylist for Hermès and Vogue Living, among other clients; and transform commercial spaces, including Japanese department store Seibu and the Hôtel Delos along the French Riviera. Quartermaine’s own apartment-cum- artist’s lair in London and her airy house in the South of France have garnered attention from international shelter magazines, too. But she still considers herself first and foremost an artist. 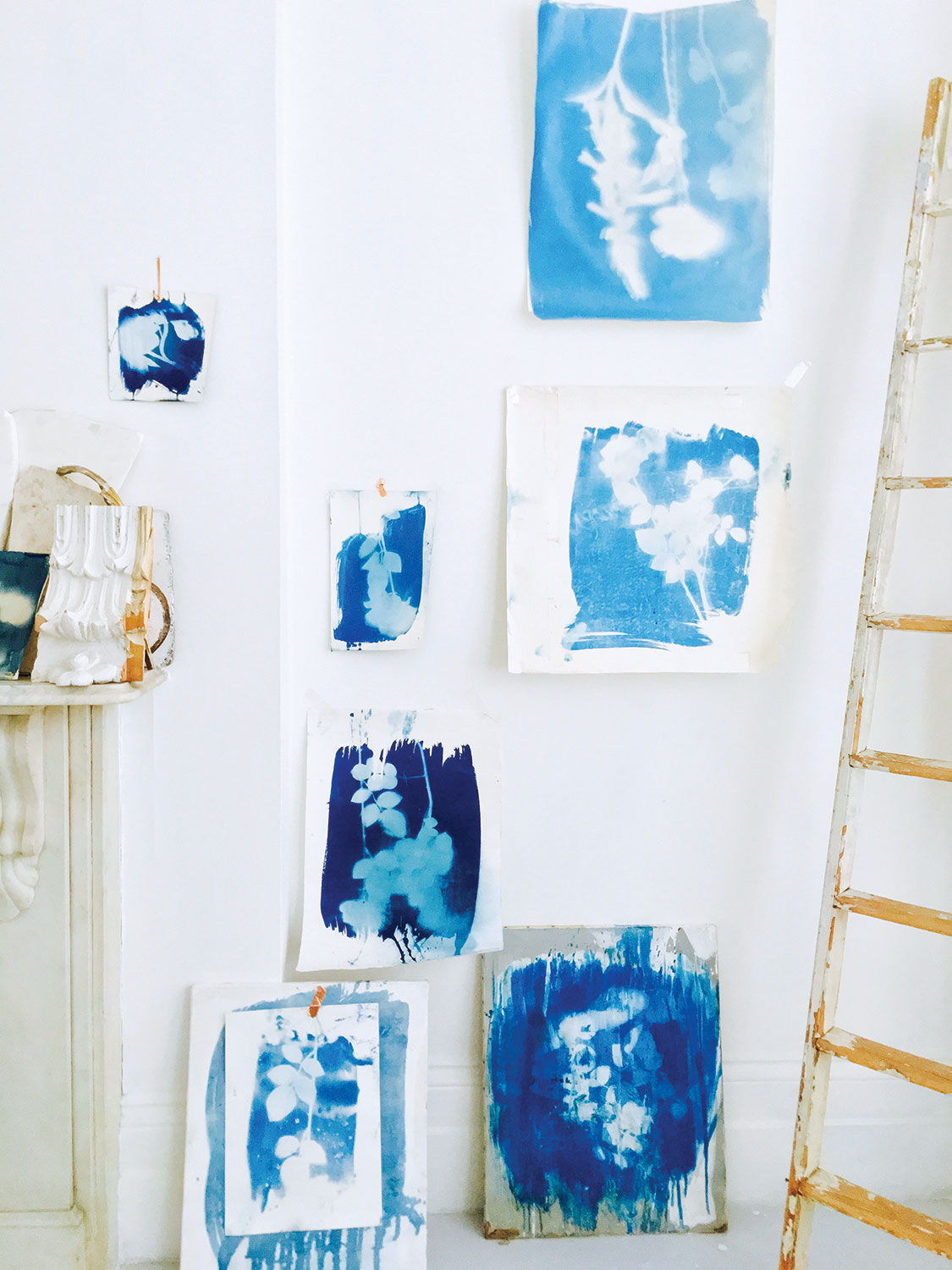 In her airy London apartment, the artist examines a series of cyanotypes loosely inspired by Victorian photograms. 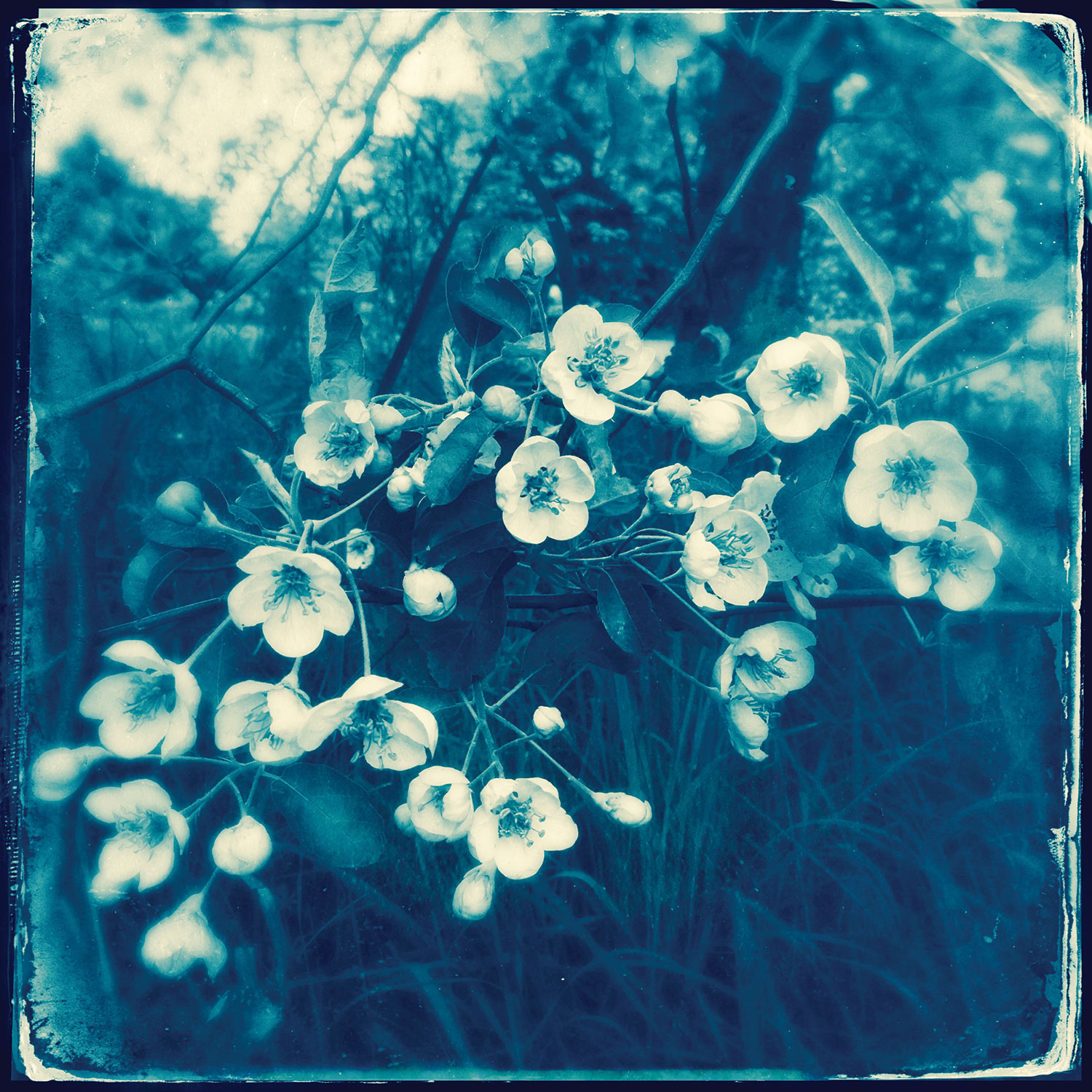 Blossoming trees have been a constant theme in Carolyn Quartermaine’s work since the age of 13. 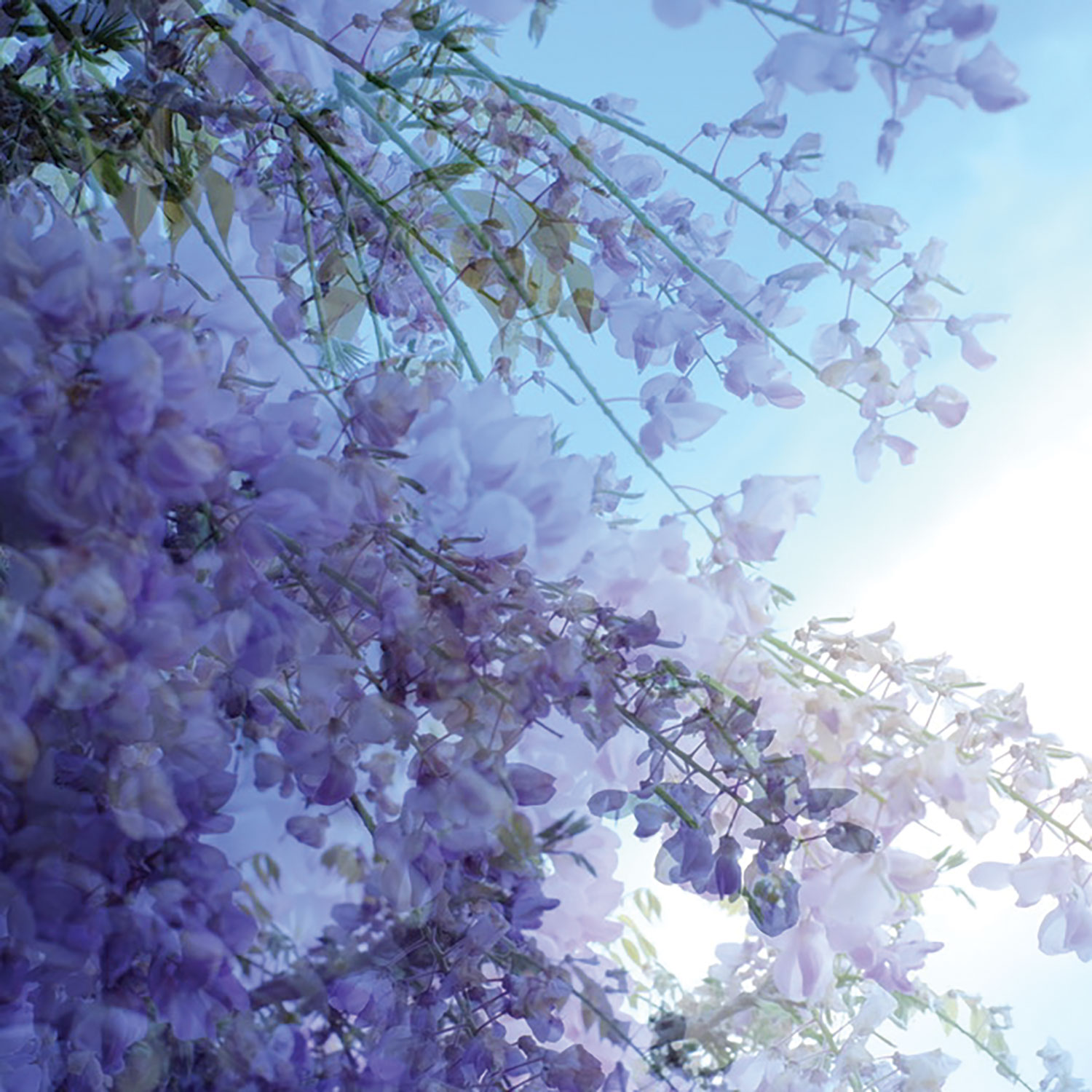 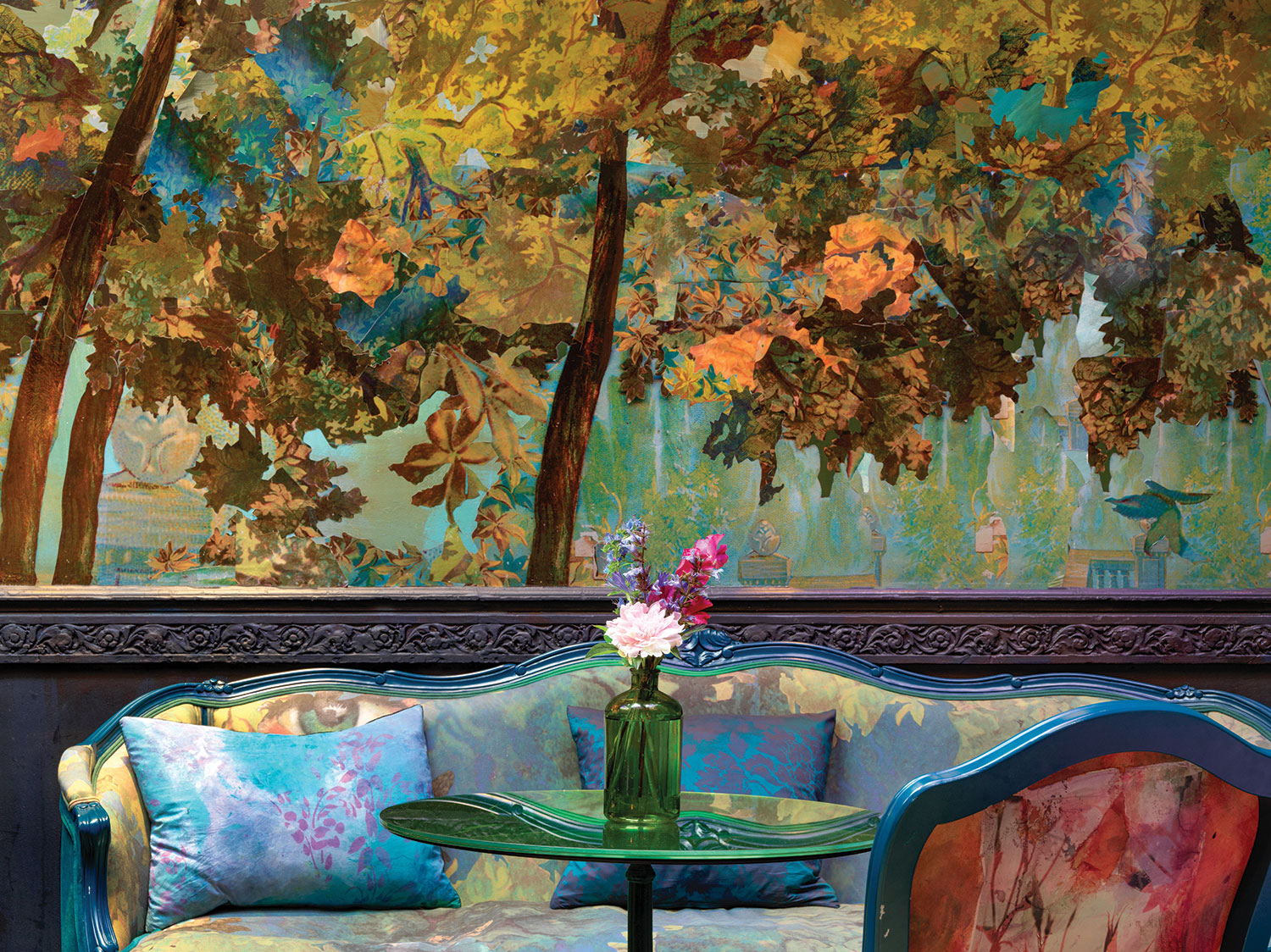 An antique postcard, enlarged by 1,000, sparked the meticulously decoupaged walls of The Glade, a London restaurant with a woodland bent, which were done by Quartermaine and fellow artist Didier Mahieu. 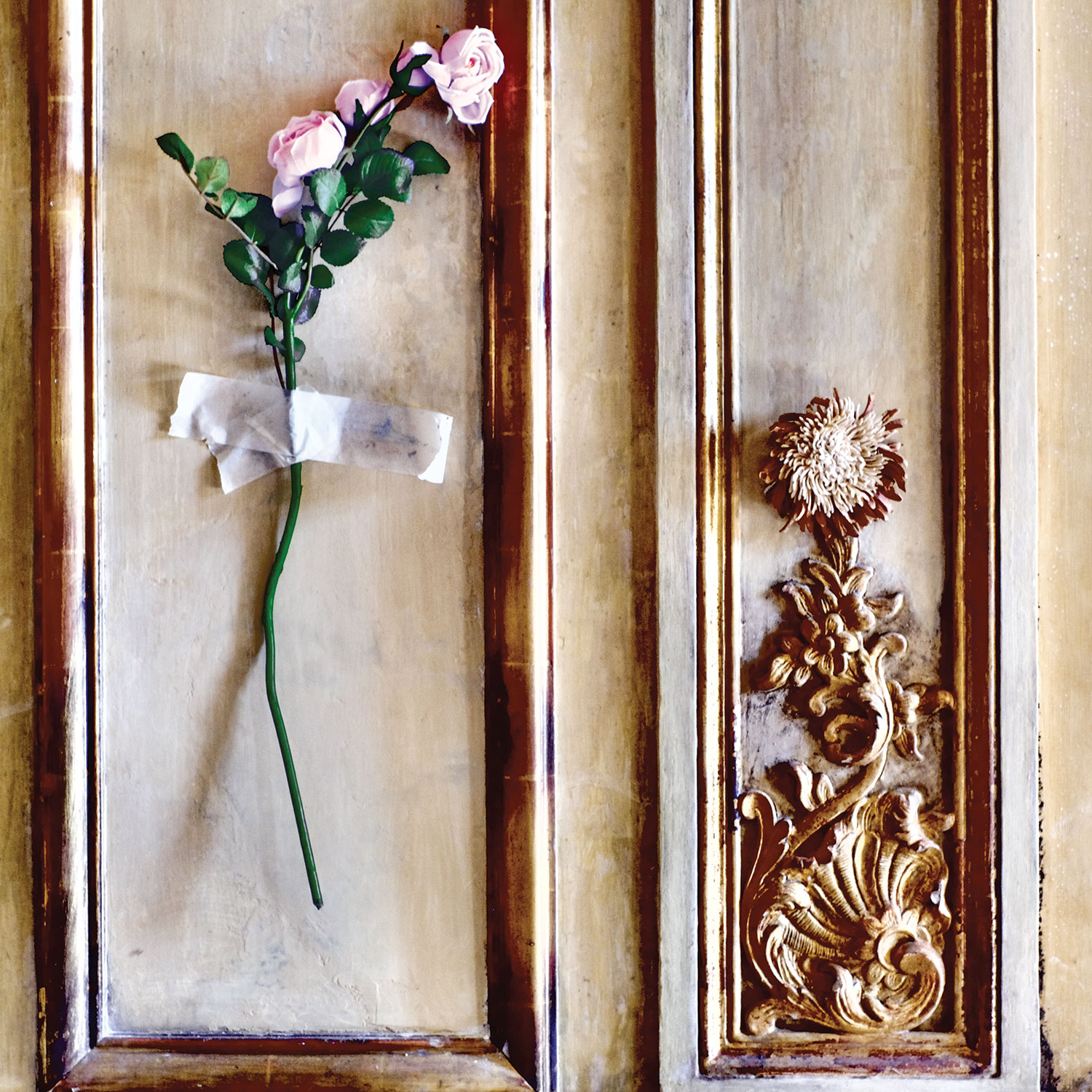 For decades the artist has been obsessed with roses. Quartermaine loved the idea of unceremoniously taping stems to the ornate but crumbly walls of a French château.

“I do rooms, but I’m not a decorator,” says Quartermaine, explaining that she approaches spaces from the perspective of a painter. Case in point: The Glade, a new and notable, woodland wonderland–like brunch spot and bar located within the restaurant and gallery Sketch, in London’s Mayfair district. To create the fairyland feeling, Quartermaine worked with fellow artist Didier Mahieu and a team of 12 artisans to decoupage the walls with roughly 30,000 pieces of paper picturing leaves and branches. She custom-printed butterflies and flowers to scatter across the backs of Louis XV–style chairs and used mirrors to give the illusion of sunlight beaming through trees. “Without fail, guests of all ages—men, women, children—everyone is transported,” she says. “It’s not an obvious forest. To me, it’s a modern art piece that tricks the eye.”

Delving further into the natural world, Quartermaine recently mounted an exhibition, Where Flowers Dream, which encompasses film, photography, literature, and cyanotypes (a centuries-old type of blue-and-white image, or photogram, made simply with sunlight and chemically treated paper). She’s inspired in part by Victorian photographers, especially women such as Julia Margaret Cameron, whose images were painterly and purposely blurred, capturing a sense of movement. In the exhibition, Quartermaine fixed her gaze on blousy roses and delicate flowering branches. She thought about those moments referenced in Peter Pan: “You know that place between sleep and awake, that place where you still remember dreaming?”

The ethereal show just closed at Musée Fragonard in Grasse, France, but another exhibition is slated to go on view at Château de Gudanes in the fall of 2018, from September 18 to December 18. In the meantime, the artist who once said she dreamed of being able to curl up and nap inside a color is deeply immersed in cyan blue; her passion for cyanotypes continues, and she wants to keep exploring the technique.