Catching Up with Bobby McAlpine

Over his 30-year career, this architect has had a profound influence on the kinds of houses being built in neighborhoods across North America. We sit down to talk about how he integrates houses within the landscape, a garden’s role in the planning of architecture, and his early creative leanings 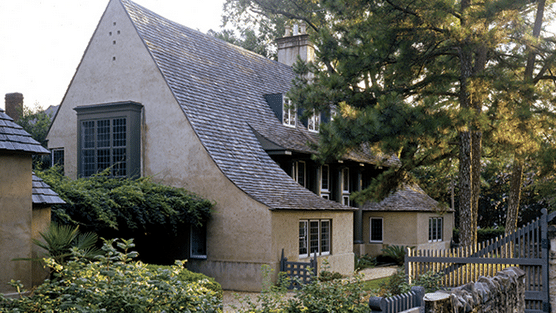 Flower: When we first met, you were firmly based in Montgomery, Alabama. You’ve branched out quite a bit since then.

BOBBY McALPINE: We have offices in Montgomery, Atlanta, Nashville, and New York, and now I live in Atlanta. I’m about to begin building a new house for myself here in Ansley Park. [Note: McAlpine House was completed in 2017. Look inside.]

You drew your first house when you were five, despite growing up in some pretty uninspiring surroundings. How did that early exposure influence your development as an architect?

I grew up in a mill town in South Alabama, which shaped me in that the houses there were built by the mill for their workers and were not proprietorial. The lack of consideration in their design drew me into a world of consideration. Sometimes, you are called to your life’s work because you didn’t see anything you recognized.

Where do you start when you’re dreaming up a new house?

I start with the furniture plan first before there are walls. As I arrange furniture, it tells me where to put the fireplace and then the room falls into shape around it. Architecture is born of the landscape, so the site always has a tremendous impact on me. If I’m designing a mountain house, everything is oriented to the view. For a beach house, on a precious, tiny piece of expensive ground, a house might be a little more ambitious and gymnastic. You might err to a little more glamour. You have to make the most of the slice you get. 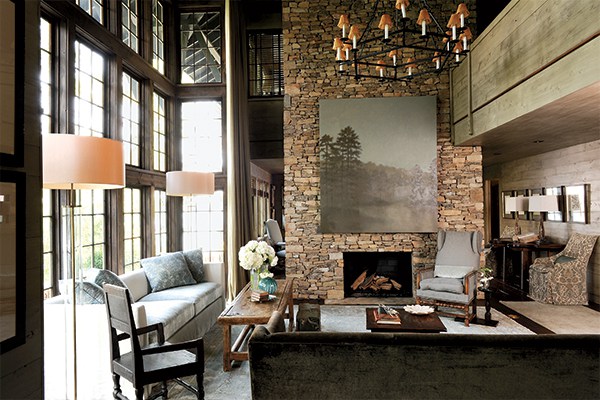 McAlpine starts a house design with a furniture plan that tells him where the fireplace will go, such as this soaring stone example for a lake house. Photo courtesy of McAlpine Tankersley Architecture

At what point do you start visualizing the landscape?

Gardens should be extensions of the rooms they’re outside of. I plant things that I would bring into the room, and my preferred palette is pretty limited to white, gray, blue, purple, and green. I like to place characters out in the lawn—eccentricities—such as topiaries that look like they wandered out into the yard.

The landscape is the correction to the architecture. Sometimes it is parallel to the house; sometimes it’s a counterpoint. A modern house frequently needs a traditional garden to soften it. Often, the garden apologizes for what you’ve done. If homeowners want a very avant-garde house on an otherwise traditional street, they need something to buffer that. Otherwise it’s going to look like an angry teenager at a dinner party. A house is successful when it looks happy in its environment. 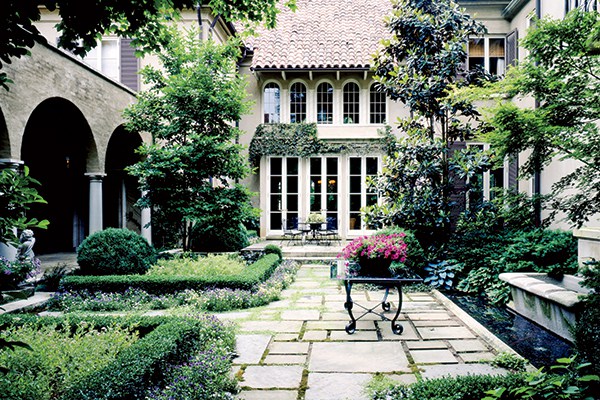 “Gardens should be extensions of rooms they’re outside of,” says Bobby McAlpine. Here, a Mediterranean-style house wraps around a courtyard designed by Nashville landscape architect Ben Page. Photo courtesy of McAlpine Tankersley Architecture

You’ve explored a look that could be described as a “fairy-tale style,” with swooping rooflines, cedar shingles—all very timeless. How do you address the gardens of that style?

That style house tends to be asymmetric, with a differently weighted mass. So a romantic, casual garden suits a fairy-tale house.

Over the years you’ve partnered often with Nashville landscape architect Ben Page. What is it about his work that suits your approach so well?

Ben is an extremely passionate and learned person. He specializes in estate design and thinks in a large landscape scale. He knows what’s going to stand the test of time. When a house changes owners, it doesn’t take long for neglect to ruin a beautiful garden. Ben thinks in those terms so that the bones, structure, and order are still intact even after years of disinterest.

Finally, you do such lovely structures for worship. Can you talk us through your thought process on those?

Our society tends to put houses of worship on a pedestal. With the chapel I built for Red Blount in Montgomery, I considered how I could add to the context of a spiritual structure. It is a pairing of two emotions I adore: inertia and ascension. I depressed the chapel into the earth up to the bottom of the windowsills so you descend into the chapel in pursuit of something higher and greater. 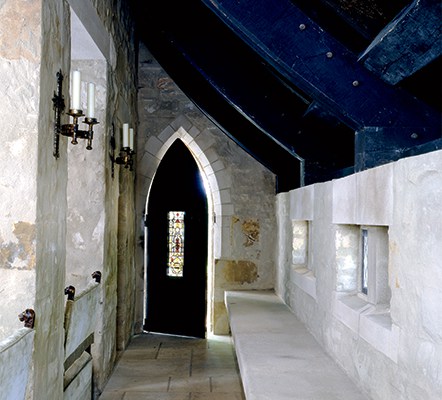 McAlpine is drawn toward the modesty of English country churches. He designed this Montgomery chapel with a side aisle entrance that parallels the vaulted sanctuary and “allows you to experience humility and grandeur at the same time,” he says. Photo courtesy of McAlpine Tankersley Architecture