The Blue Garden was planted along a central water feature of blue-tiled pools connected by a water runnel, surrounded by formal planting beds. Photo by Marianne Lee

More than a century after Harriet James’ ethereal Blue Garden on Newport, Rhode Island’s craggy, boulder-strewn coast was lauded as a pinnacle of the Gilded Age, its tender rescue by noted philanthropist and horticulturist Dorrance “Dodo” Hamilton is being heralded as a noble preservation feat. “Once we become aware of its rich history, we were compelled to get involved,” says Hamilton.

The rich history Hamilton refers to dates to the early 1900s, when copper and railroad magnate Arthur Curtiss James and his wife, Harriet, added glamorous Newport to their string of properties. They segued away from storied Bellevue Avenue, favored by the Astors, Vanderbilts, and Dukes, to settle on the moors atop the tallest hill on Aquidneck Island. Boasting sweeping ocean views and grounds dramatically littered with huge bluestone outcroppings, this lofty windswept coast felt just right for young James, an avid yachtsman who relished his role as Commodore of the New York Yacht Club.

One of the wealthiest men in the country, the publicity-shy titan was one of America’s least-known millionaires. When he married the vivacious Harriet Eddy Parsons in 1890, she became the exuberant counterpoint to his quiet personality. Soon the couple acquired residences in Manhattan; Coconut Grove, Florida; and eventually Newport, where they commissioned architectural firm Howells & Stokes to design Beacon Hill House in 1909. Mrs. James’ penchant for fine clothes and jewelry was no secret, but her genuine passion for flowers became a driving force in the evolving estate. Once infrastructure was complete, she hired prominent landscape architect Frederick Law Olmsted, Jr. to develop a plan for a monochromatic blue garden.

Landscape historian and Olmsted scholar Arleyn Levee explains that the garden eventually became the largest project designed by the Olmsted firm in Newport. “Contrary to the belief that the garden consisted of only blue flowers, it actually included herbaceous plant material of purple, lavender, gray, and white hues that became a shimmering evocation of sky and water,” she says. “The garden was intended to be a hortus conclusus, or secret garden.”

The estate’s original owner Harriet James wowed guests in a blue costume adorned with sapphires, diamonds, and amethysts at the Masque of the Blue Garden, a soiree celebrating the unveiling of the garden in 1913.  Portrait from the collection of the Redwood Library and Athenaeum.
Of renewing part of Newport’s special history, philanthropist Dorrance “Dodo” Hamilton says, “It was simply the right thing to do.” Here she sits for a portrait inspired by a photo of the estate’s original owner, Harriet James. Photo by Marianne Lee

The horticultural triumph called for a festive inaugural party, and invitations to the Masque of the Blue Garden became the most anticipated of the 1913 season. On the evening of August 15th, 300 members of Newport society snaked along Beacon Hill Road for their first look. Commodore James greeted arrivals, and then before a lively Italianate pageant enacted by professional entertainers from New York, Mrs. James appeared in a 16th-century blue-and-mauve Italian costume embroidered in sapphires and amethysts. Her elaborately bejeweled headdress anchored by strands of diamonds caused guests to address her as “Lady Sapphira.” After the rousing conclusion, a trumpeter led guests into Beacon Hill House for dinner and dancing.

From that night on, the Blue Garden became renowned for its beauty and served as a backdrop for numerous social events, from Garden Club of America meetings to lavish soirees for visiting royalty. As cost was never a factor for the couple, the garden was replanted with fresh stock several times each summer by a team of 40 gardeners to maintain its dramatic color.

“It’s a renewed garden. While restoring its historically intended character, its new mission is to be maintainable according to environmentally sustainable 21st-century standards.”—Arleyn Levee
Photo by Marianne Lee

After their deaths within weeks of each other in 1941, attention to the Jameses’ beloved property withered. The 125-acre estate was gifted to the Catholic Archdiocese of Providence, and repurposed buildings were repeatedly vandalized. After the mansion was devastated by fire and demolished, the property was subdivided into house lots and  sold in the 1970s. The once-glorious Blue Garden vanished from view, overtaken by thickly overgrown brambles, invasive vines, and trees.

In 2012, Hamilton stepped in to begin rescuing the garden. Blue Garden Director Sarah Vance explains, “Once the land was cleared, the team, which included landscape architect Doug Reed from the Cambridge-based firm of Reed Hilderbrand, worked with Olmsted’s archival plans to explore alternatives to original plantings. They needed to recapture the unusual monochromatic hue, but simplify it.”

Today the garden epitomizes its original horticultural exuberance yet changes its personality in every season. “Rather than a restoration, it is a renewed garden,” says Levee. “Without the original bevy of gardeners to keep the garden continually at its peak condition, the new plantings are influenced by the original plant palette, but with a 21st-century eye to decreased maintenance, water needs, longevity of bloom, and texture,” she says.

As the water jets arc into the air, sea breezes rustle leaves, and even when misty fog gently cloaks the scene, the milieu evokes Newport’s Gilded Age. On brilliant days, when blue delphiniums, irises, artemisia, lavender, and nepeta tilt their faces to the sun, one can only imagine the joy Mrs. James would have felt strolling her garden. Hamilton feels that joy, too, and her stewardship ensures that the Jameses’ legacy lives on. “It was simply the right thing to do,” she says. “But really, words cannot convey the fun we had doing this project 101 years after it was unveiled.” 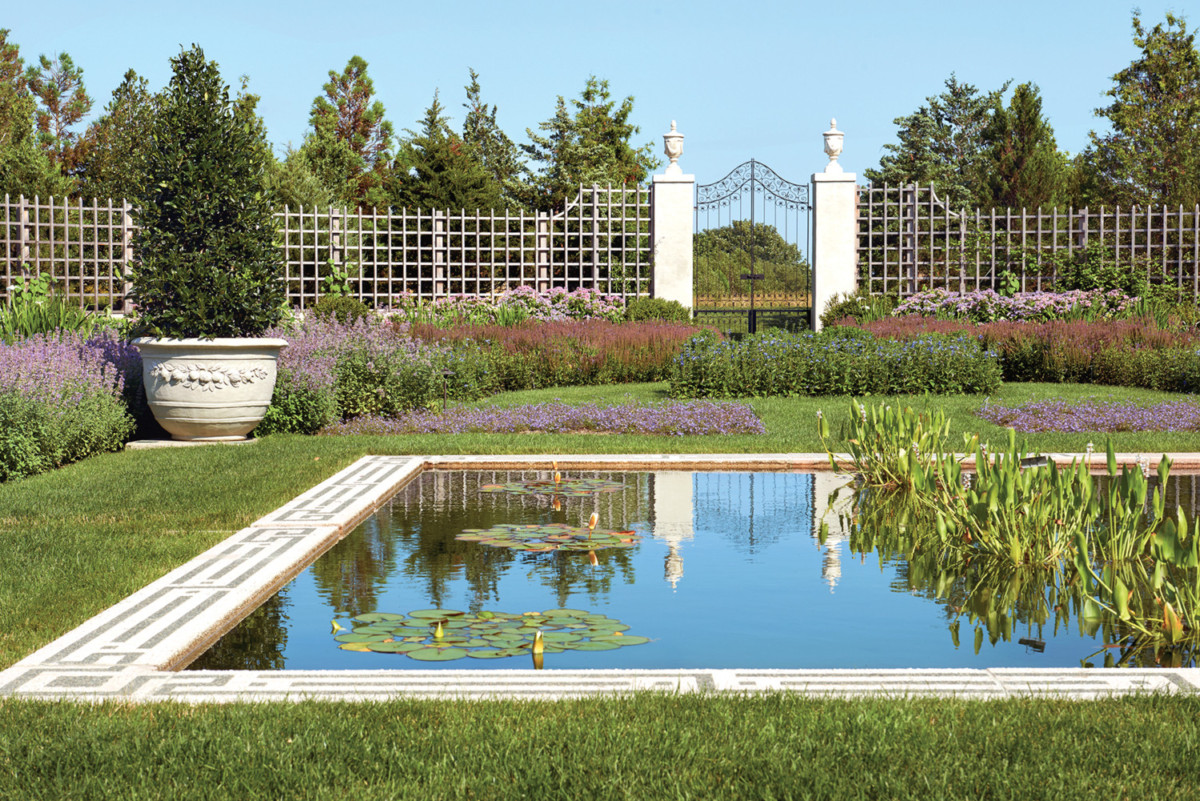 Original construction drawings provided a map for the restoration of the Blue Garden’s structures, including the metal gates, trellises, pools, and pergolas. Photo by Millicent Harvey 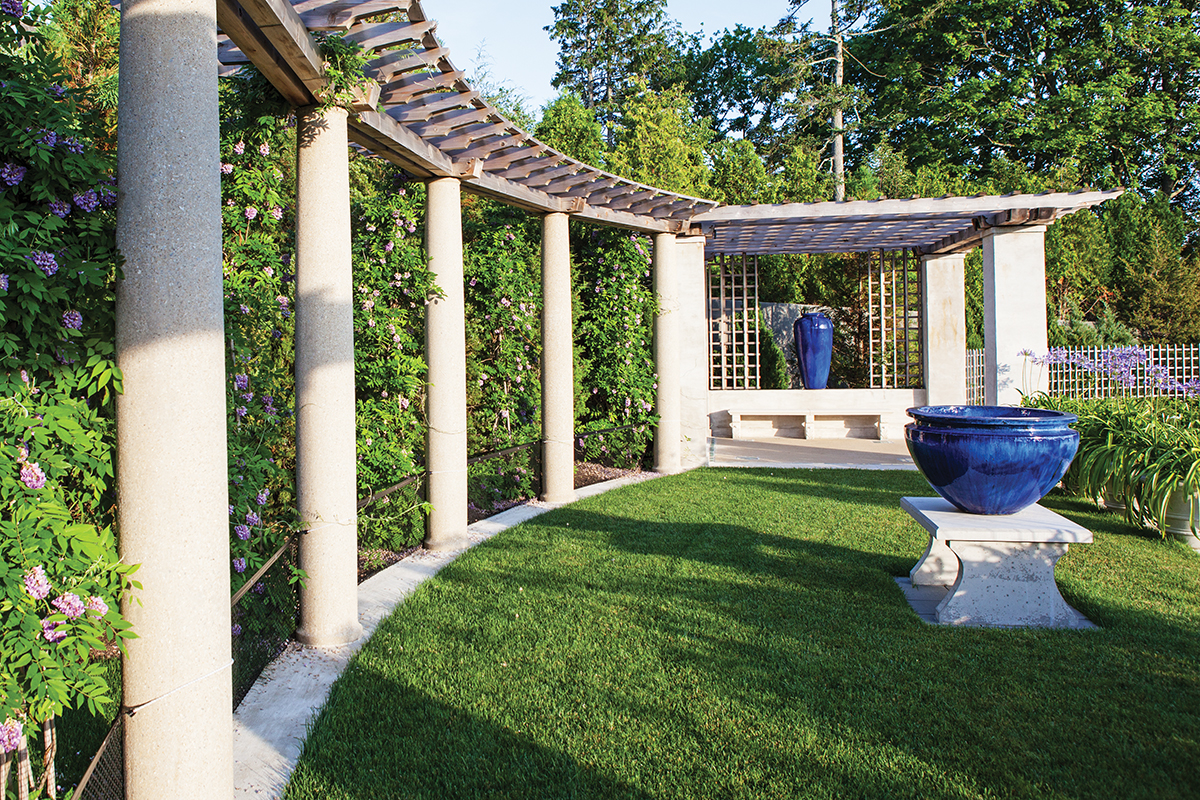 “Enclosed by vine-covered walls, with an outer layer of richly textured shrub and tree plantings, the garden was intended to be a hortus conclusus, or secret garden," says scholar Arleyn Levee. Photo by Marianne Lee 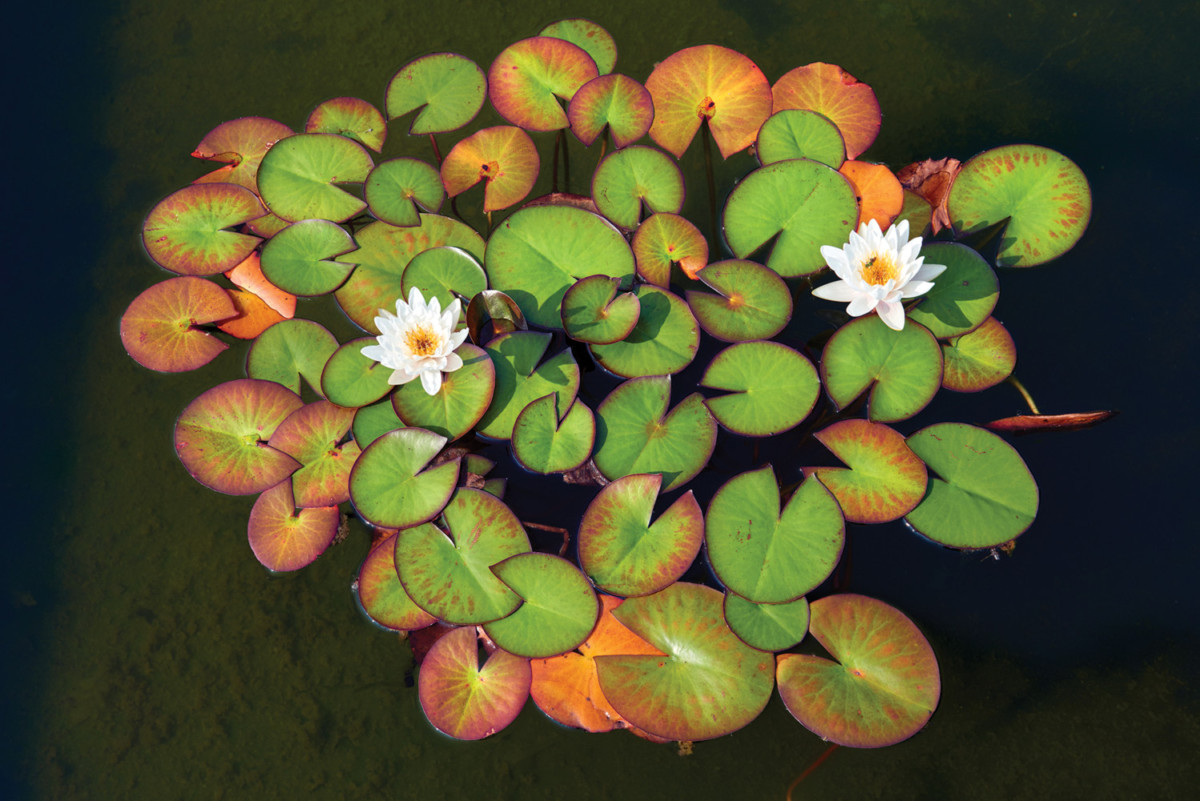 The Blue Garden is private but open by appointment on Thursdays from mid June through early October, thebluegarden.org.