For almost two decades, one Mississippi family has thrown open their doors to welcome the winter solstice and a houseful of friends 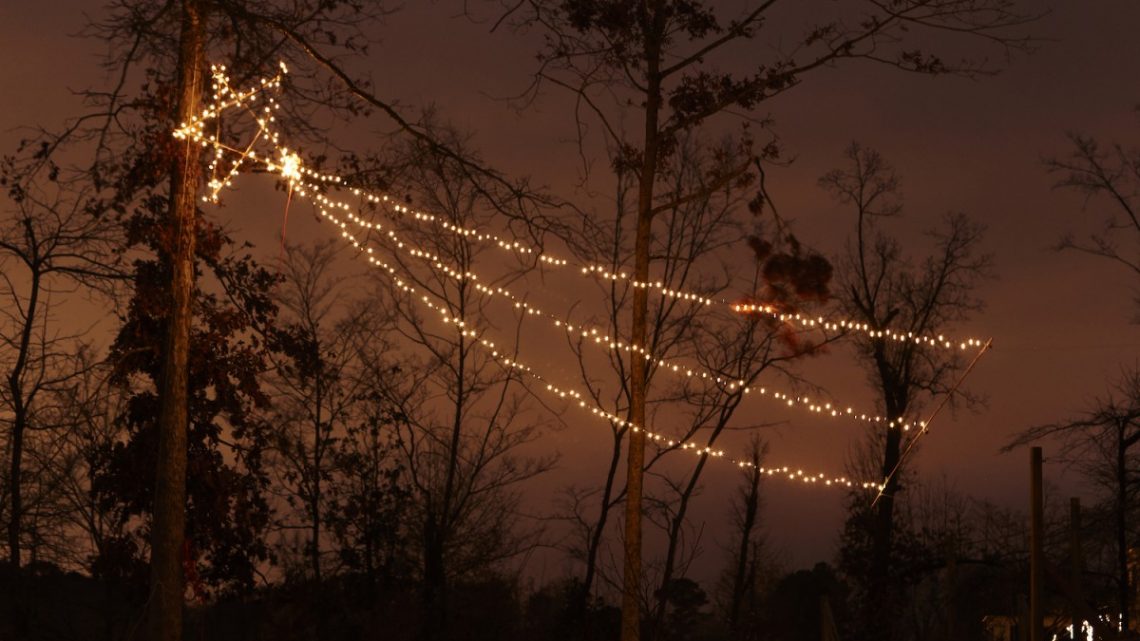 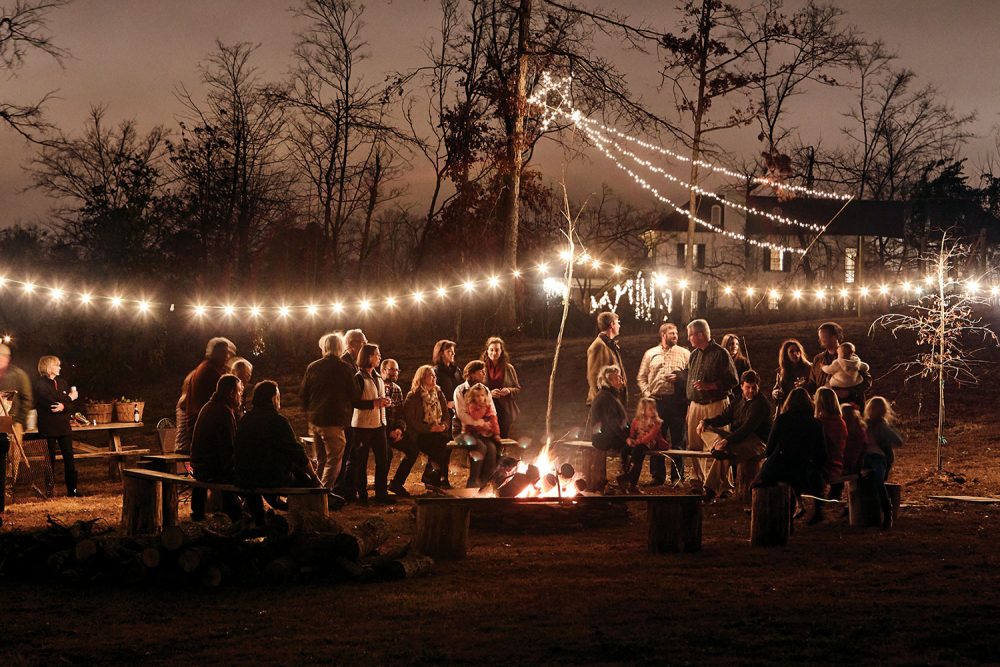 Guests at Camille and Crofton Sloan’s winter solstice celebration begin to gather around the bonfire, with a shooting star in the trees behind.

Even the most hallowed traditions have to start somewhere. For my aunt, Camille Sloan, and her husband, Crofton, it was around a bonfire in a soybean field down the hill from their wooded home in Tupelo, Mississippi. The year was 1999; the date was December 21—the winter solstice—the longest night of the year.

Camille remembers coming home late that night from our family’s retail store where she works: “When I got home Crofton said, ‘Let’s go down to the bottom, I’ve got something to show you,’ ” she recalls. “I thought, I’m tired, but OK. When we got there, he had a bottle of red wine and had built a bonfire. He said, ‘‘It’s the winter solstice. We need to celebrate.’”

They had a wonderful time down there that night staring up at the stars, the fire and the wine driving back the winter chill. And they thought they might want to do it again. The couple had married not too long before and, with six children between the two of them, they thought starting a new tradition might be a good idea. 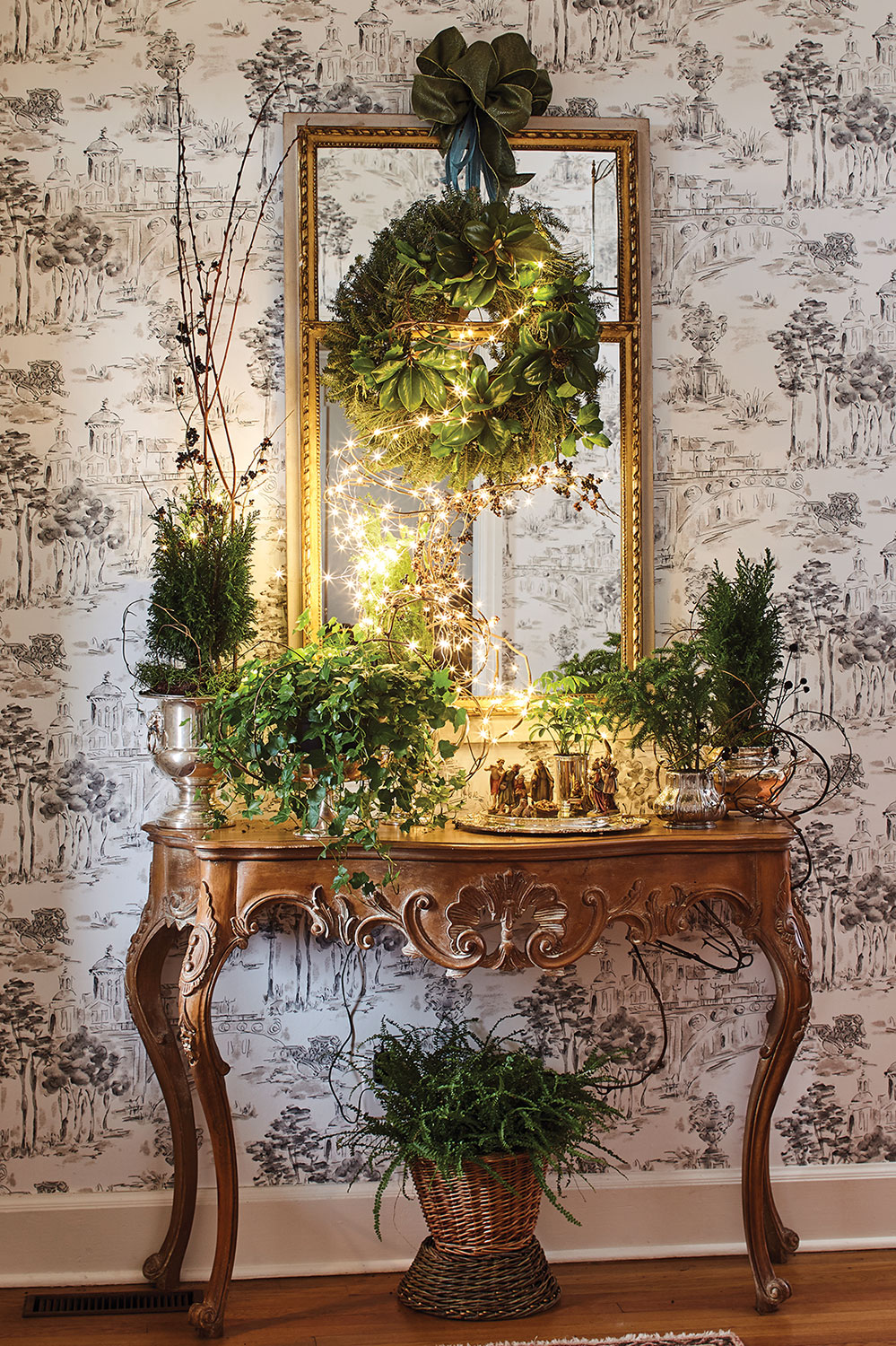 One year later, they threw their first winter solstice party. The invitations that year—and every year since—were sent to whole families, so that friends who had parents visiting, children home from college, or a gaggle of little ones felt welcome to bring them along. The attire was “bonfire casual.” In her entry hall, Camille created a magical forest, decorating small cedars cut from their property with homemade star ornaments and thousands of white lights. Swags of greenery—magnolia, cedar, and pine—filled the nooks, mantels, and banisters in the house that was brimming with more than a hundred people. 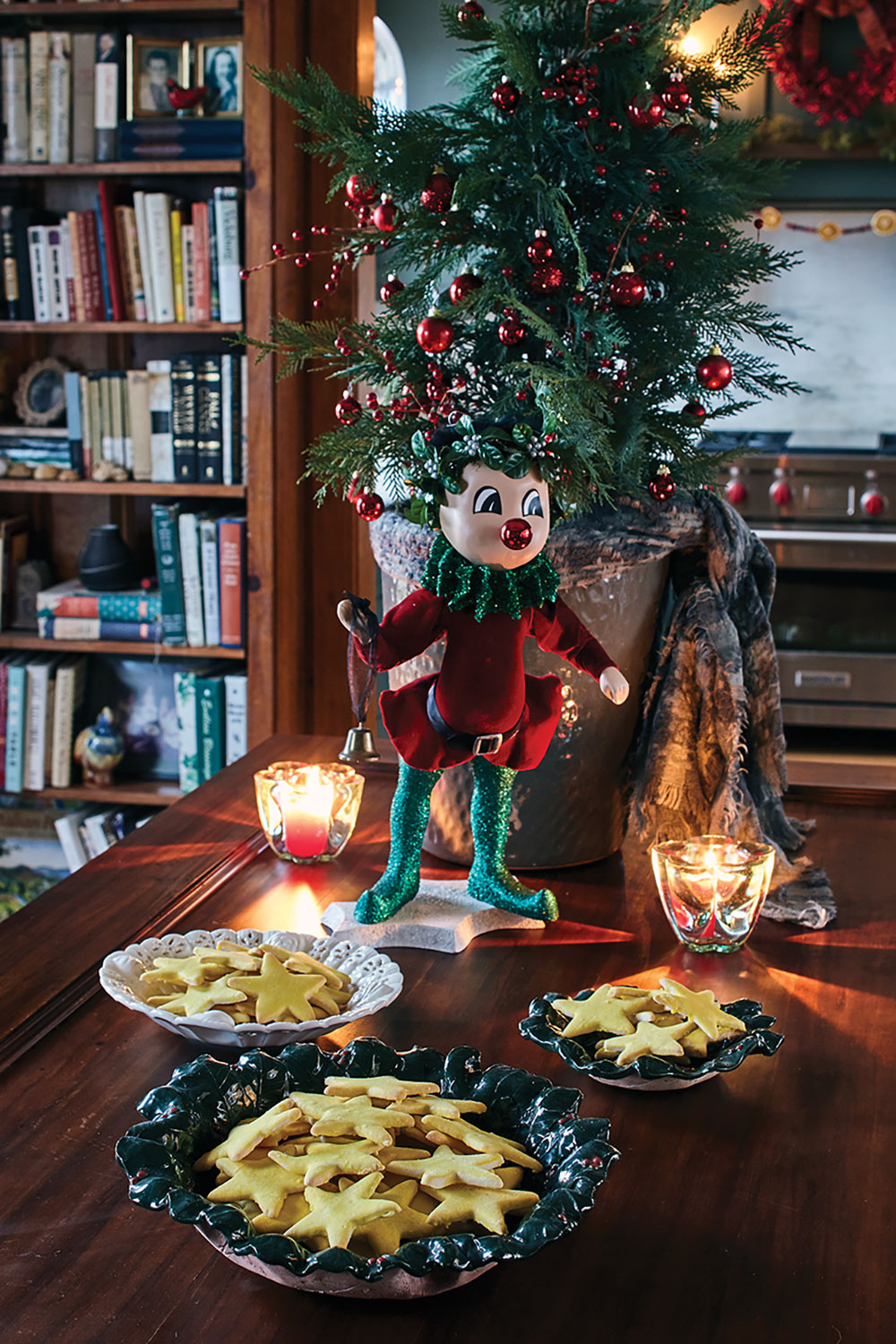 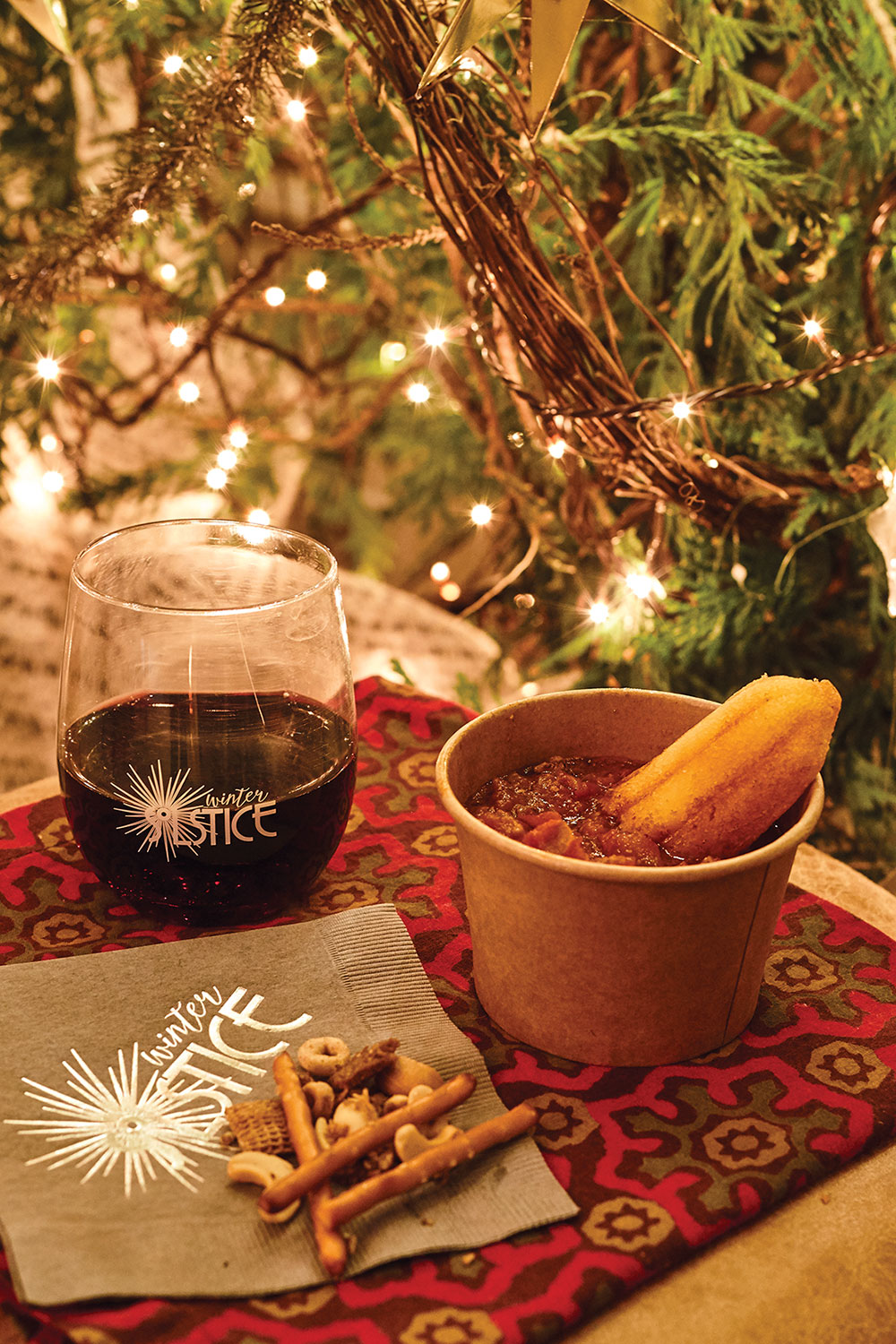 The food wasn’t fancy but was hearty and delicious—cups of chili with a spike of corn pone, beer cheese dip, Chex mix, and mountains of star-shaped sugar cookies. Strands of lights hung in the trees outside, some in the shape of shooting stars, and led down to the bonfire, where men roasted hot dogs for waiting children.

As everyone gathered, Crofton offered a welcome and a blessing, which he has repeated each year. “People worldwide, of all cultures and beliefs since prehistoric times, have observed this astronomical event,” he says. “There is a constant theme of darkness and light; there is a desire to bring light into the darkness.” 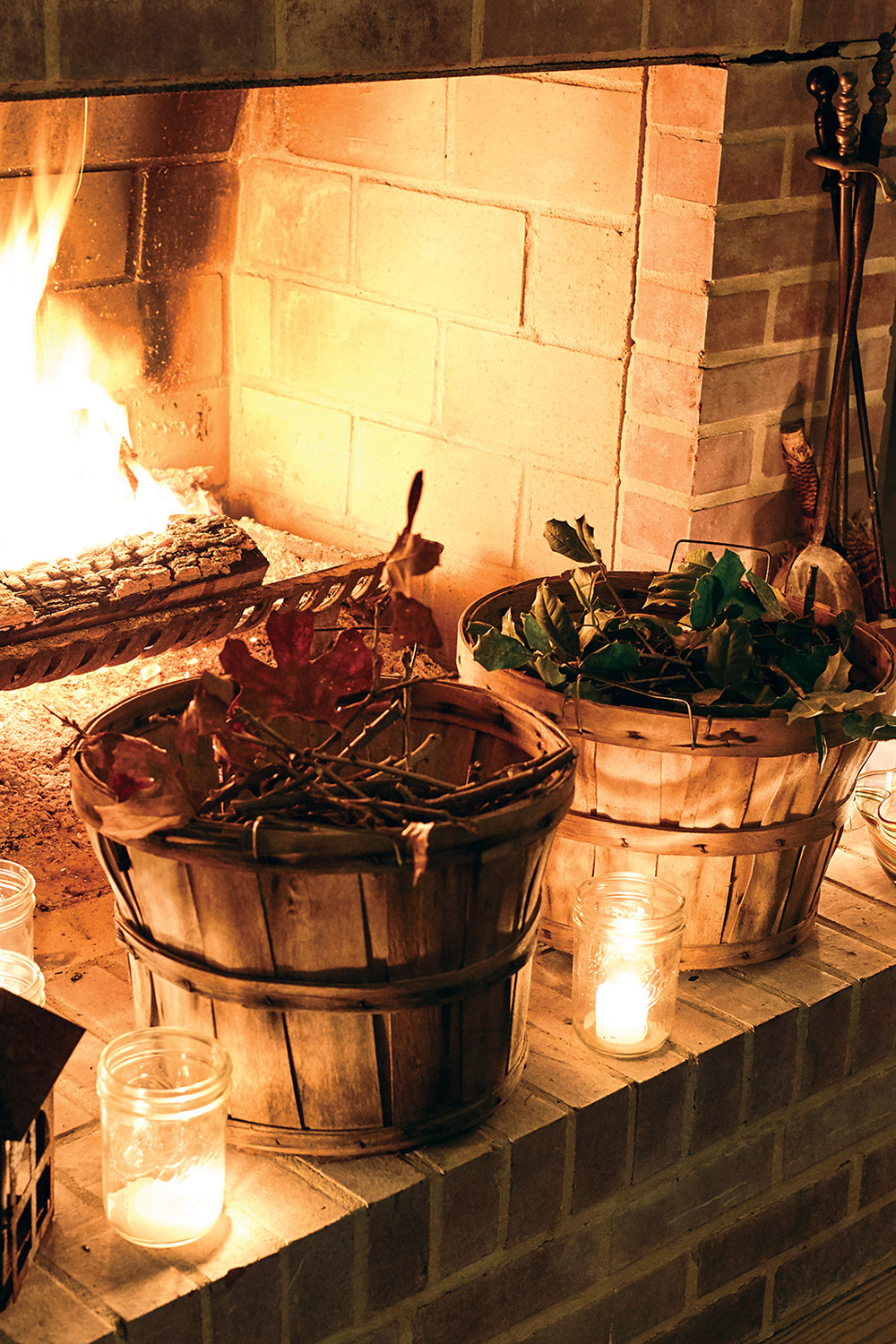 Friends are invited to throw branches of oak and holly into the fire to honor the past year and welcome the next.

The Druids in northern Europe, he said, saw the changing of the seasons as a struggle between the Oak King, who was dominant in summer, and the Holly King, who was dominant in winter. During the winter solstice, Druids threw branches of oak and holly into the fire in remembrance of the past and in anticipation of the coming year. Camille and Crofton had baskets of oak and holly boughs by the fire for guests to do the same. 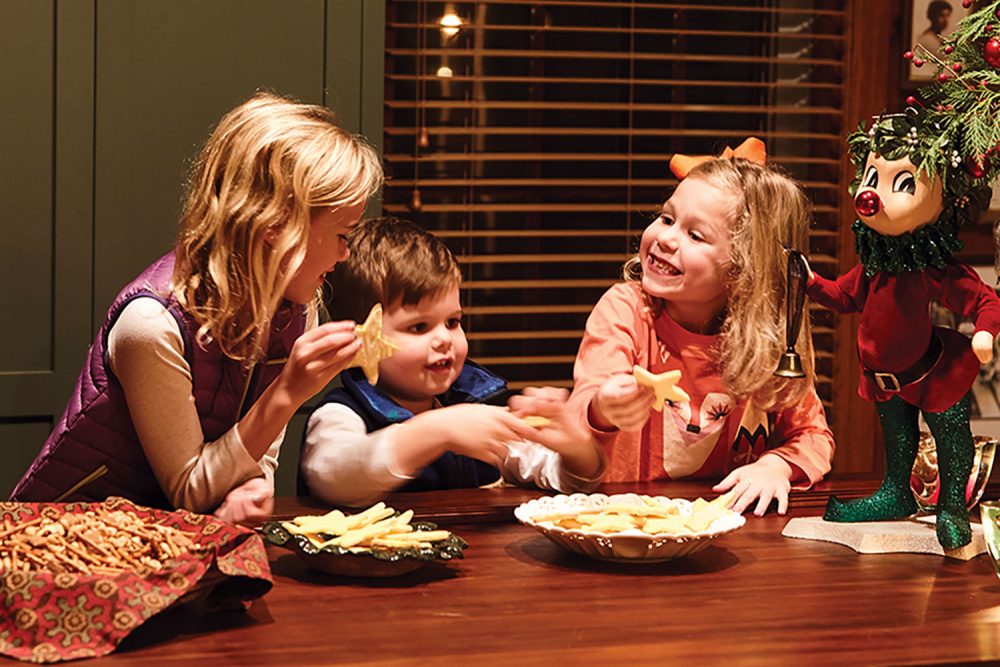 Traditions, like trees, grow sturdier with time. Now the winter solstice party—almost two decades running—has become a way to mark the passing of time itself. Each year we miss those who are no longer with us, we hoist up new babies, show off engagement rings, hear about new adventures, retell old stories.

Not that the gathering itself hasn’t evolved. A few years ago, when Camille and Crofton moved into my grandparents’ home (a stately brick house on a nice piece of property but not as rural and wooded as their first), everyone worried the party wouldn’t continue. But Crofton and his sons were on ladders hanging lights that December and building a bonfire at the bottom of the hill. And this year, before too long, Camille will get ready to bake 250 star cookies, hang greenery, get out the homemade ornaments, and prepare the baskets of oak and holly, so that we can all huddle around the bonfire to celebrate friends, family, and Christmastime and the wonder of light shining in the darkness. 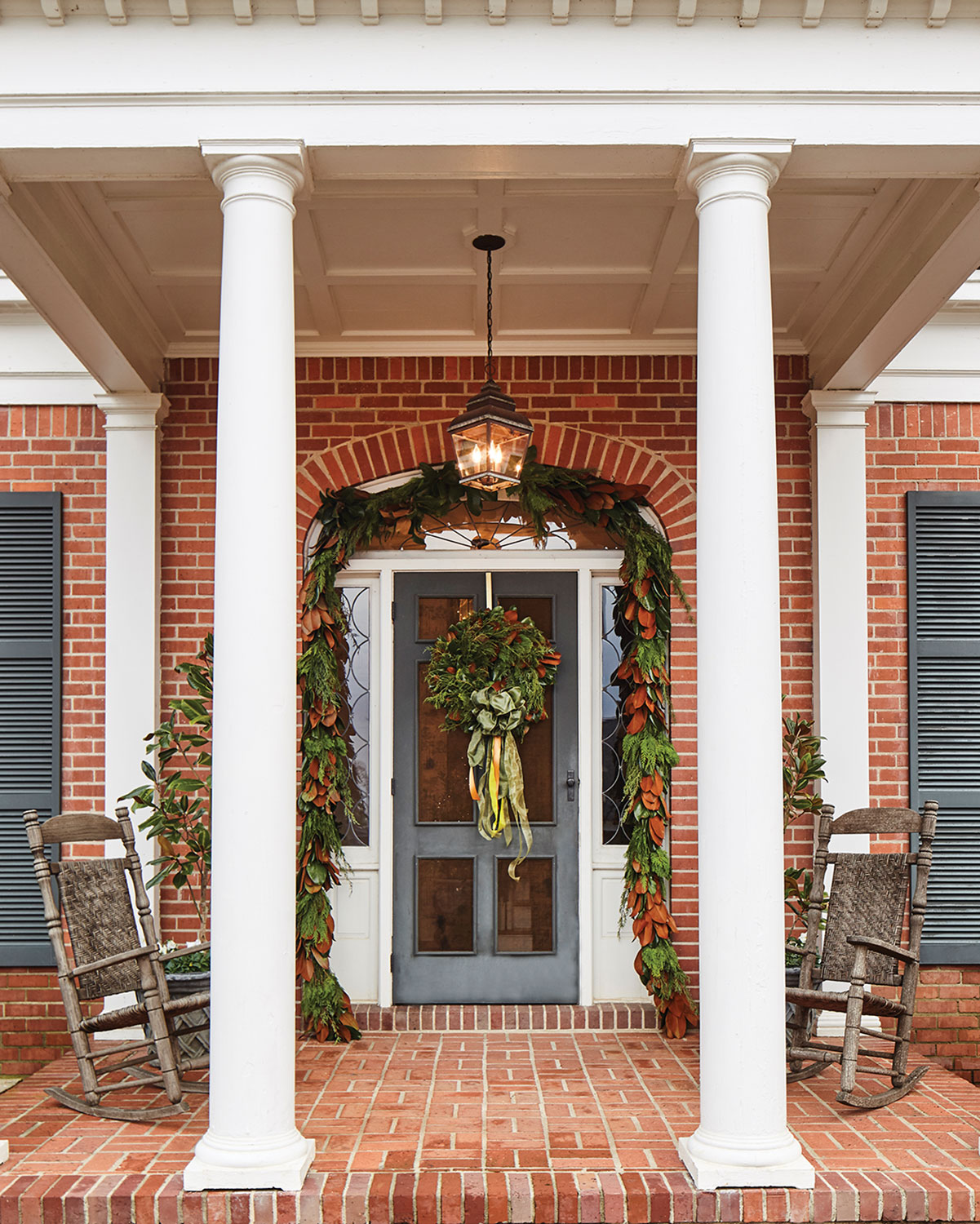 The Sloans’ front door decked in cedar and magnolia welcomes family and friends to their annual winter solstice party.