When the flowers are gone, some leave behind a decorative winter surprise. Plantsman and garden designer Ryan Gainey expounds on several of these bountiful berries 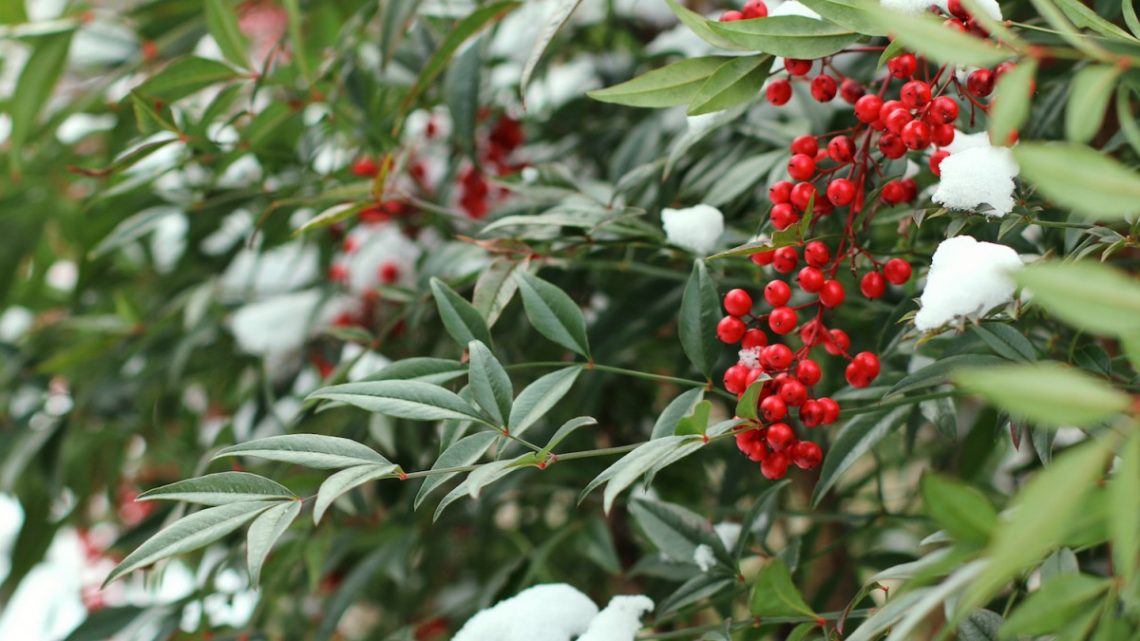 Being a gardener, I feel the garden in winter is just as an essential source of beauty and usefulness as the garden in spring, summer, and fall. In her book, The Garden in Winter, Rosemary Verey issues a plea: “A garden in winter is the absolute test of a true gardener.” Flowers throughout the seasons produce the fruit (berries) that become the mainstay of decorating my home for the holiday season. It would be impossible for anyone to grow the myriad plants that provide us with such an array of fruit, not only in shape and size but also in a color spectrum that includes reds, greens, gold, greys, and even magenta.

To enlighten you or merely refresh your memory, I have compiled a list of plants that produce useful berries, many of which I grow. What I do not grow, I gather from the roadside or rely upon a local flower shop to supply me.

Yellow Holly Berries
Ilex, the genus of all hollies, is the most useful and accessible for decorating during the holidays. There are yellow-berried forms for those who wish to stray from traditional red. Photo by Myton Photographic

Nandina Berries
Nandina domestica, heavenly bamboo, is a must for a southern winter garden. To use in decorating, its leaves, berries, and branches make a spectacular arrangement in large decorative pots or urns. Bundles attached to the mailbox are a quick and easy way to announce the season. Photo by TMsara/Shutterstock

Winterberry
Ilex Verticillata, the common winterberry, and ilex deciduas, ‘Warrior’s Red,’ are choice cultivars. And if you prefer golden berries, a rarity of winterberry I favor is ‘Winter Gold.’ Photo by Denise Foley

Common Juniper Berries
The resinous, sweet, sharp flavors of Juniperus communis is a principal flavoring in gin. The same berries add a culinary zip to many dishes in France, Sardinia, and Corsica. Photo by Adam Radosavljevic

Cedar Berries
The holiday season would be incomplete without boughs from our nation’s eastern red cedar, Juniperus virginiana. The sweet, woodland aroma of its foliage is an added plus to its panicles of blue-grey berries. Having it inside reminds me of my youth when our Christmas tree was a juniper gathered from the woods, where it had been planted by birds after their wintertime meal. Photo by damman

Chinaberry
Another remembered berry of mine, Melia azedarach, the chinaberry, offers clusters of bright green berries. Now readily available during the holiday season, they add a wonderful, rural southern touch to the holiday bounty. As children in grammar school, we gathered the ripe fruit, boiled off the pulp, dyed the seeds with Jestors Dye, and strung them into necklaces for our mothers at Christmas. Another gift of the season.

Bayberry
Myrica pennsylvanica is often found growing in the bays of our southern coastline. While not so useful in decorating, the waxy coating on the berries was melted off by the colonists, providing them with wax for producing bayberry candles. Photo by Frank Reiser
Learn the significance of bayberries in "The Meanings of Flowers."

Rose Hips
Just when you thought your roses were finished until spring, think again. Allow for the flower to turn to seed.  It will begin as green and turn to red and orange colors as the fall progresses.
Harvesting Rose Hips

In my own garden, I have a 40-foot evergreen specimen of ilex opacca, the native American species. The tree is a female, with emphasis on the gender, as it is only the female that produces the fruit or berries. Every winter I gather boughs to place among my candlesticks on my mantles and for the making of wreaths. The greatest gift of this tree is not to me but to the birds for whom it provides a winter long feast, especially robins who stay about the garden all year long, feasting from its bounty. And often in late winter a shadowy blur comes into the sky, like a cloud, composed of thousands of blackbirds. They flock in daily succession until every berry is consumed.

Let me remind you again of the importance of gender with hollies and some other winter-fruiting trees and shrubs. You must provide the female with a male companion to assure copious fruit. A good nursery should be able to supply both, a horticultural match.com as it were.

The Garden in Winter by Rosemary Verey (Timber Press, 1995)

Previous post How to Make a Festive Holiday Wreath