Tricia Foley’s Long Island, New York, interiors are wrapped in neutrals all year through, but it’s during the holidays when they truly shine with gleaming silver, fresh greens, and flowers

Ever since Bing Crosby first crooned White Christmas, we’ve longed for glistening treetops and listened for sleigh bells come every December, whether or not our own particular climes offer even the remotest possibility of snow. That designer, stylist, and author Tricia Foley cites the holiday song as her favorite is hardly surprising given that she dreams—and lives—in white year-round. Walls and furnishings in hues that range from the cool and pristine to the color of fresh cream welcome the addition of organic textures and flowers in every room of her 1820s farmhouse on Long Island, New York.

“I love white because it’s a clean slate,” says Foley, sitting down to her kitchen table, the unofficial hub of the house, where she preps for projects, entertains friends, works, and writes (including her book, Life/Style: Elegant Simplicity at Home [Rizzoli New York, 2015]). “It accommodates every style and you can add in anything. I live in this 200-year-old house, but I also have a lot of modern things, and it all just works. I’m eternally drawn to the calmness and order that neutrals bring.”

Who wouldn’t be drawn to the serenity that Foley’s decorating evokes, particularly during the holidays, a season that often overloads the senses, jams the calendar with red-letter dates, and creates seemingly endless to-do lists? Speaking of lists, Foley considers them absolutely essential to keeping her life and constant stream of projects on track, not only during Christmas preparations, but also throughout the year. “I’m making lists all the time,” she says, and like a certain famous resident of the North Pole, she’ll check them twice—and then again. [Get a head start on your planning with Tricia Foley’s Holiday Checklist.]

It’s no wonder Foley can host a pre-wedding dinner for an A-list designer one weekend and a family reunion for 50 the next without seeming to bat an eye, as she swears it’s a consistent approach to organization that ultimately allows her to greet guests with warmth and ease, making whatever she’s orchestrated appear almost effortless. The fact that she also has cupboards and bins stocked with enough accoutrements to set the table for 10 or 100 also helps. This former president of Wedgwood USA, who has been collecting china, silver, and linens since her high school days, freely admits to a serious tableware addiction, “but at least it’s a safe one to have,” Foley says with a laugh.

There’s no time more than Christmas when she enjoys putting her entertaining and decorating skills—and all her beautiful tableware and collections—to spectacular use, and it’s winter when the house truly seems to sparkle, proving that a backdrop of white appears anything but cold or boring in Foley’s hands. She fills rooms with paperwhites and amaryllis, strings lights on mantelpieces, places candles everywhere, and keeps the home fires burning in the fireplaces. Foley gathers greens from around her five-acre property, and procures trees from the local farmer’s lot. Foley might decorate the trees with seashells one year, boxes of vintage ornaments the next, or decide to leave them relatively unadorned with lights and pinecones. A mantel could be draped in a boxwood garland, or massed with her prized collection of milk glass and crowned with a craft-store wreath that she has spray-painted silver.

While the schemes invariably change, the palette wavers little, though certainly allows for the inclusion of a red-berried branch or two. The stylist who has produced numerous photo shoots for home and food magazines during her career never wants to appear too predictable. But it’s here where a riotous mix of vibrant color often associated with the holidays is as unlikely to surface as a blizzard on a tropical island.

However, if Mother Nature decides to complete Foley’s simply picture-perfect decorations by spreading a thick blanket of snow outside her front door (as has been the case the last few years), well, the designer considers that the proverbial icing on the cake. Because for Foley, even if the weather doesn’t cooperate, it will always be a white Christmas. 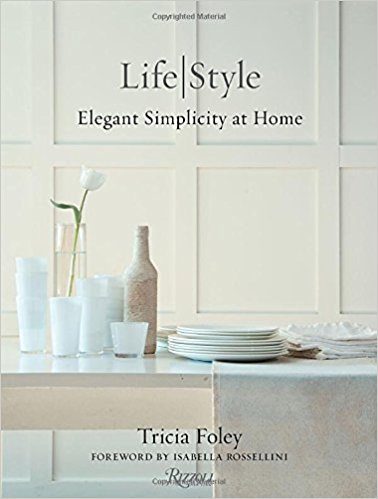