Rachel Ashwell, the creator of the iconic Shabby Chic brand, allows her romantic vision to take root in Texas at her boutique bed-and-breakfast 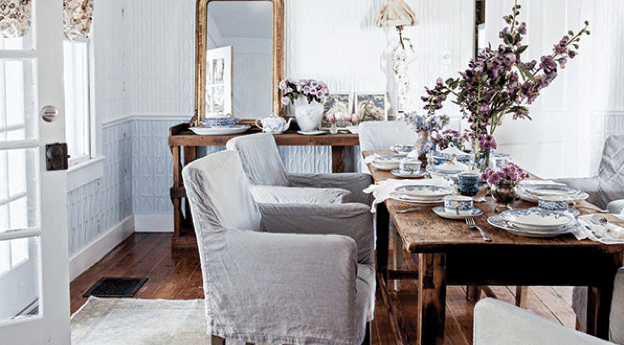 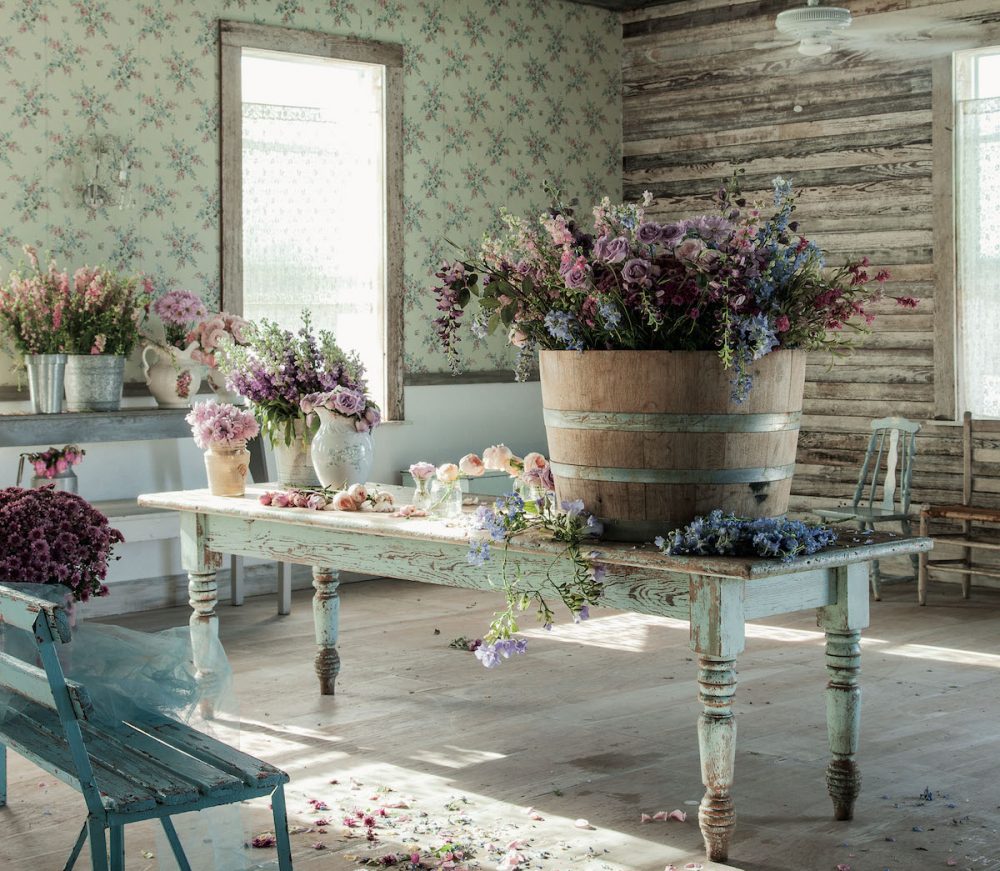 Prairie barrels have become an iconic element of Rachel Ashwell’s Prairie bed-and-breakfast. Filled with masses of both faux and fresh flowers, they can be refreshed quickly in the scorching Texas sun. 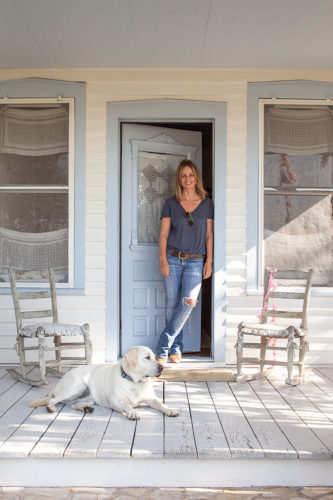 Designer Rachel Ashwell (shown with Pearl on the porch of Liliput Lodge at her Texas bed-and-breakfast) creates environments brimming with beauty and romance, and, of course, plenty of flowers.

Britain’s Rachel Ashwell made her mark on the world of interior design when she launched her first Shabby Chic home furnishings store in Santa Monica in 1989. After 25 years, eight best-selling books, and untold numbers of timeworn floral motifs paired with dripping chandeliers, cushy slipcovered sofas, and well-loved vintage finds, she’s still growing onward and upward. Never flagging in her embrace of imperfection and artistic vision for uniting seemingly disparate elements, the business hit a bump in the road when the economy tanked in 2008, and she closed her stores. But it didn’t take long to rebound, and this time around, she’s adding even more surprising elements to the mix: Not only launching new shops and products for her devoted fans, she’s also putting down roots in Texas by throwing open the doors of a bed-and-breakfast.

The designer’s latest venture is The Prairie by Rachel Ashwell, a 46-acre property midway between Austin and Houston. It’s a place she visited as a guest for many years while making semi-annual pilgrimages to Round Top for the celebrated antiques fair that takes over the tiny village—population 90—with swarms of crowds on the prowl for one-of-a-kind wares. The bed-and-breakfast had been formerly called the Outpost at Cedar Creek, and once the proprietor felt it was time to pass it on, she planted the seed with Ashwell, one of her most loyal visitors. “So, on a little bit of an impulse—on a whim and prayer, really—I bought it,” Ashwell says. 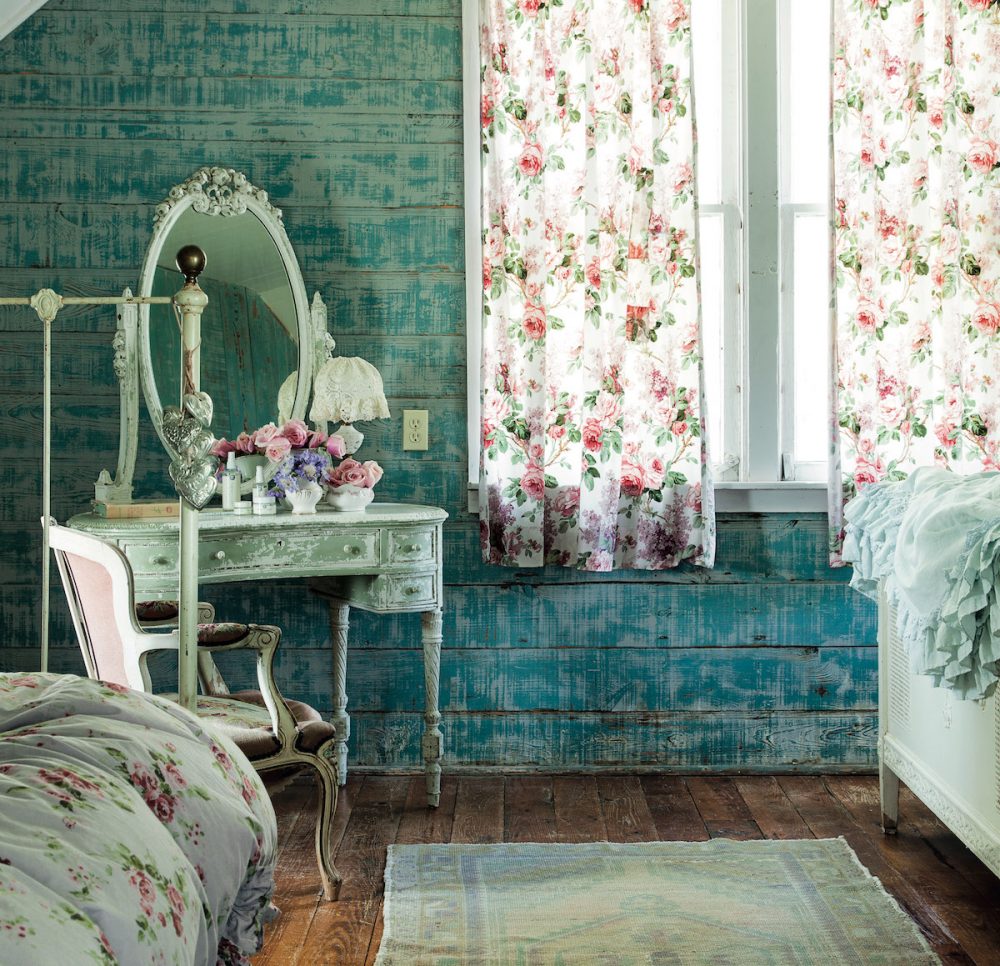 Floral prints, ruffles, lace, and a string of silver hearts offset the rugged woodwork in one of the guest rooms.

She brought in white paint by the bucketsful to begin transforming the rough-hewn Texas vernacular architecture inside and out. Room was made for the many treasures, signature ruffled linens, floral wallpapers, and blowsy draperies that Ashwell and her team either picked up or designed along the way. Rechristened The Prairie, it’s now home to accommodations and gathering spots such as Liliput Lodge, Meadow Manor, and Pearl Barn, and is available for weddings, conferences, retreats, and special events—or just for curious fans who wish to experience the magic of the designer’s aesthetic for a night or two.

The property has been documented in the book, Rachel Ashwell Couture Prairie (Cico Books, 2013), in which Ashwell tells the story of the transformation and provides insight into how the rugged Texas architecture and environs became a satisfying counterpoint for her romantic aesthetics—perhaps a fated union for the designer long known to favor well-worn Levi’s and cowboy boots. Never one for primly ordered saccharine, her style has evolved over the years in such a way that the deeper tones of existing materials and the masculine ruggedness of hewn timbers intensify the fragile beauty—all offset with a touch of wabi-sabi, the Japanese concept of finding perfection in imperfection.

Here we see the tractors and laundry lines, the dry dirt paths and sun-bleached grasses. And one of the most significant tools for bringing it all together are the luscious bouquets placed with abandon amid the rustic, the aged, and the weather-beaten furnishings. The bouquets are essential: Like an alchemist’s transmutation of lead into gold, bounteous flowers in myriad states of life provide fuel for much of the transformation that takes one from shabby to Shabby Chic. 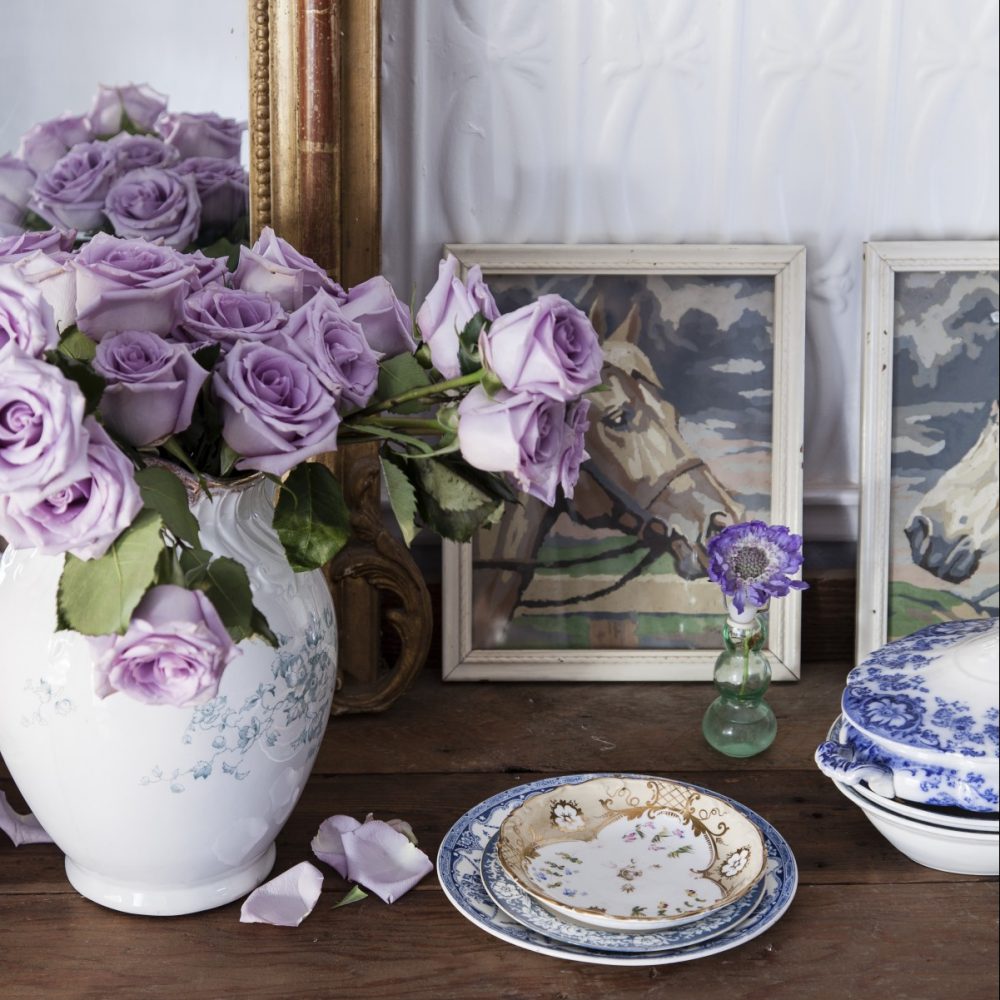 Ashwell finds the beauty in imperfections by layering timeworn favorites and staying true to a particular palette. 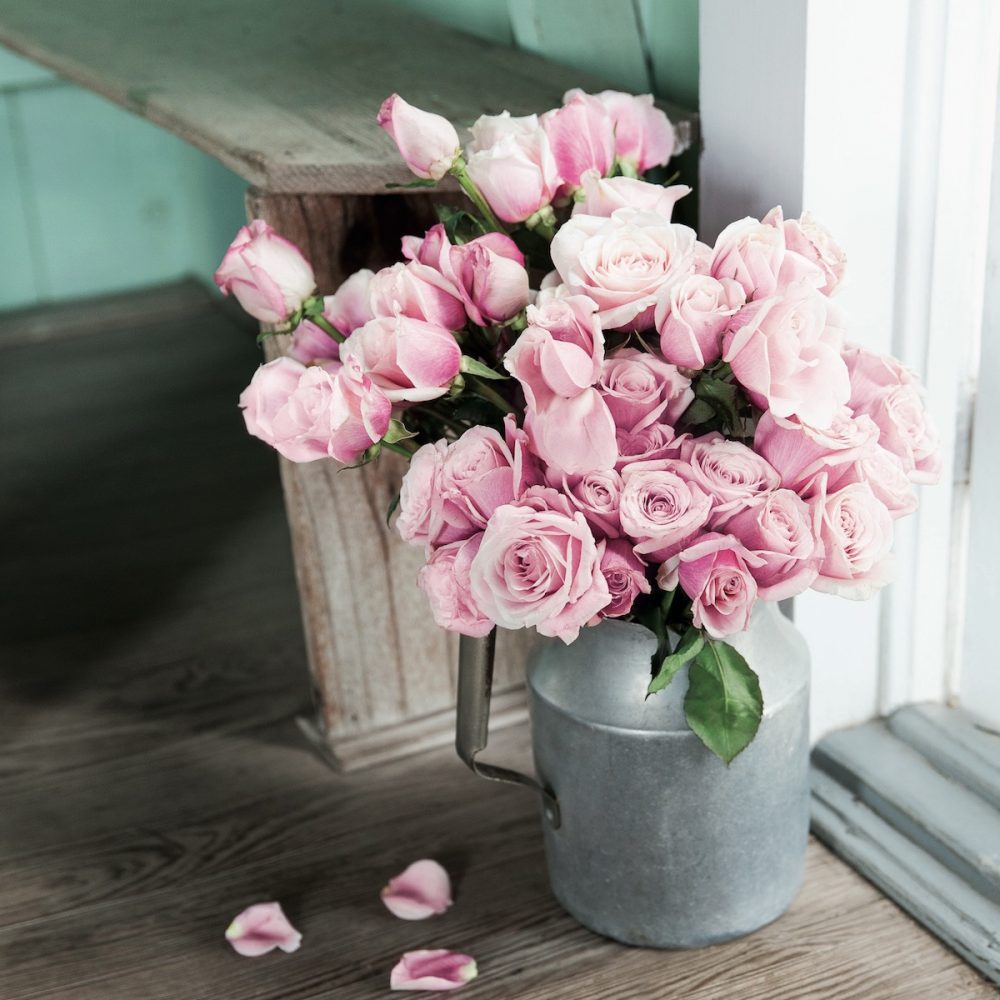 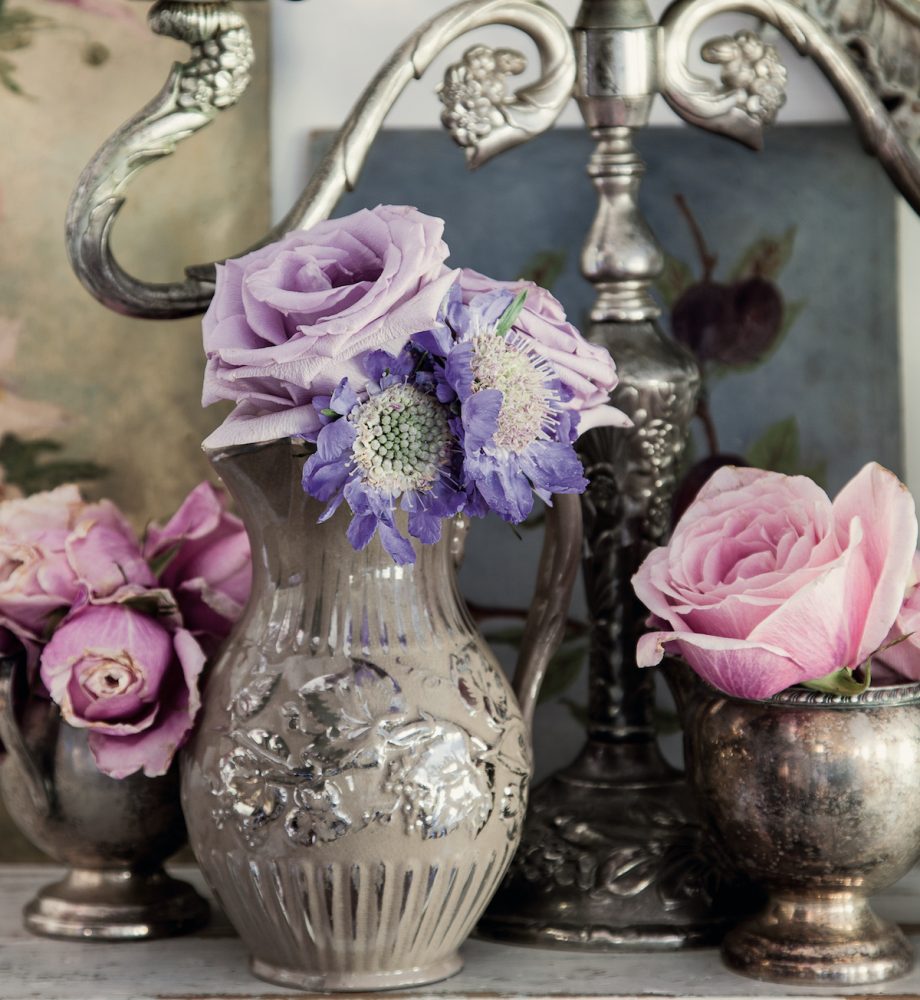 Flowers enliven the antique and vintage wares Ashwell finds while on the hunt at the Original Round Top Antiques Fair.

“Obviously I love the palette that flowers bring to my spaces,” she says from her design studio in Los Angeles. “There’s a million pinks, and it’s the same with whites—I like a pure white. That’s one quite common thread for me. I also have a great appreciation for the seasons of flowers—when they’re fat and luscious and then when they’re on their way out with petals dropping everywhere.” 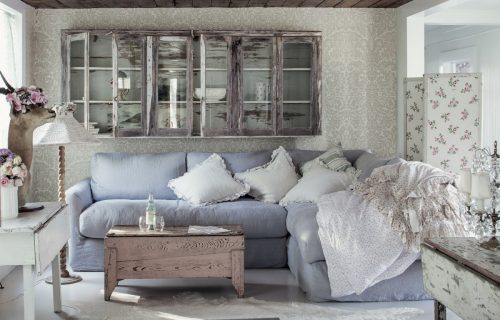 One of Ashwell’s signature sleeper sofas as well as Farrow & Ball wallpaper dress up Meadow Manor.

One of her signature arrangements these days is a prairie barrel: an aged wooden barrel wrapped in rusting metal straps and overflowing with an assortment of roses, lisianthus, delphiniums, stock, and larkspur. Her trick for making them last in the scorching Texas sun: “We make a walkway of four or six of them at The Prairie,” she says, “and they’re a mix of fresh and fake. From dawn until dusk, you have some freshness. I’ll keep a little center open, where I can pop in a bucket of fresh flowers. And even on my book tour these prairie barrels have become an iconic part of the event.”

“I’m not a snob where flowers are concerned,” she says. “There’s a wonderful flower market in downtown Los Angeles, but I also can supplement more exotic roses by going to Costco or Walmart,” she says. “My favorite flower? Well, obviously garden roses are my number-one favorite, but I love David Austin roses. I tend to barely ever use red though. Occasionally yellow, but not often. I tend toward a pastel palette with some hot colors thrown in.” 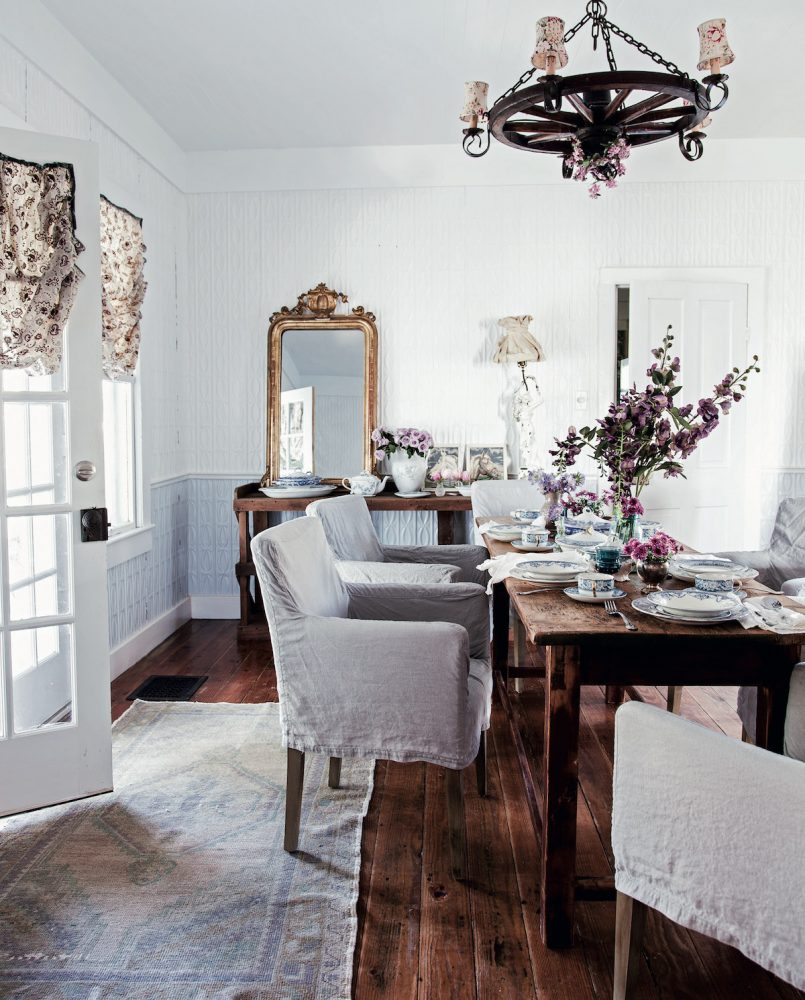 Today Ashwell’s vision remains carefully focused. She has newly refreshed retail stores—appropriately called Rachel Ashwell Shabby Chic Couture—in Los Angeles, San Francisco, New York, London, and, of course, at The Prairie in Texas. She and her team also partner with Target and Great Britain’s House of Fraser for a value line. “I’ve learned that the value brand can be both beautiful and vital because there’s such rich fuel in the couture line. I’m aesthetically putting my soul on the table. I’m not going to focus groups; it’s really coming out of my heart,” she says. It’s a process that began with her parents, both dealers in antique and vintage wares. Her father dealt in collectible books; her mother restored antique dolls. “My mum really taught me that there’s beauty in imperfection. And that’s what Shabby Chic is all about.” 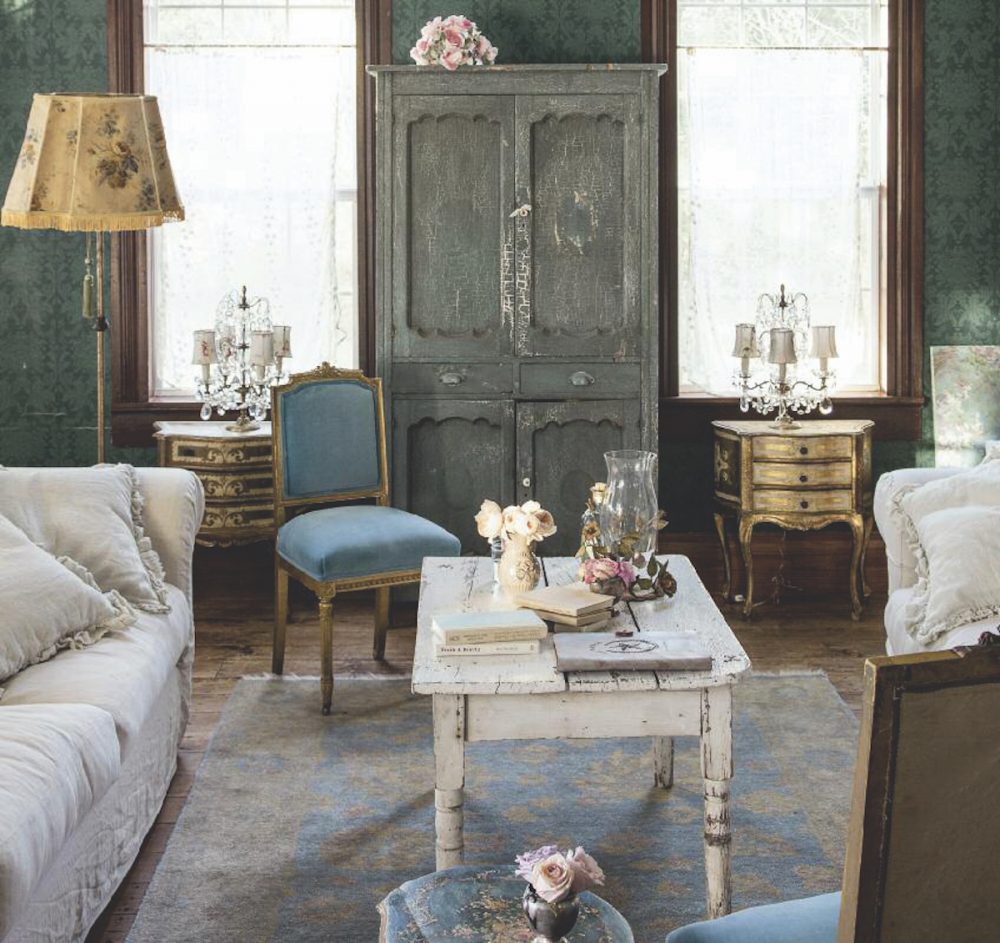 Ashwell combines elegant elements such as the gilded Florentine table and crystal light fixtures with rougher pieces like the coffee table and armoire. She finds many of the antiques she uses while shopping the flea markets and antiques booths of Round Top. 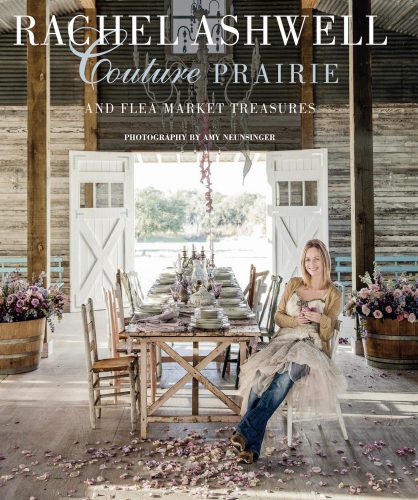 More from Rachel and Other Designers We Love