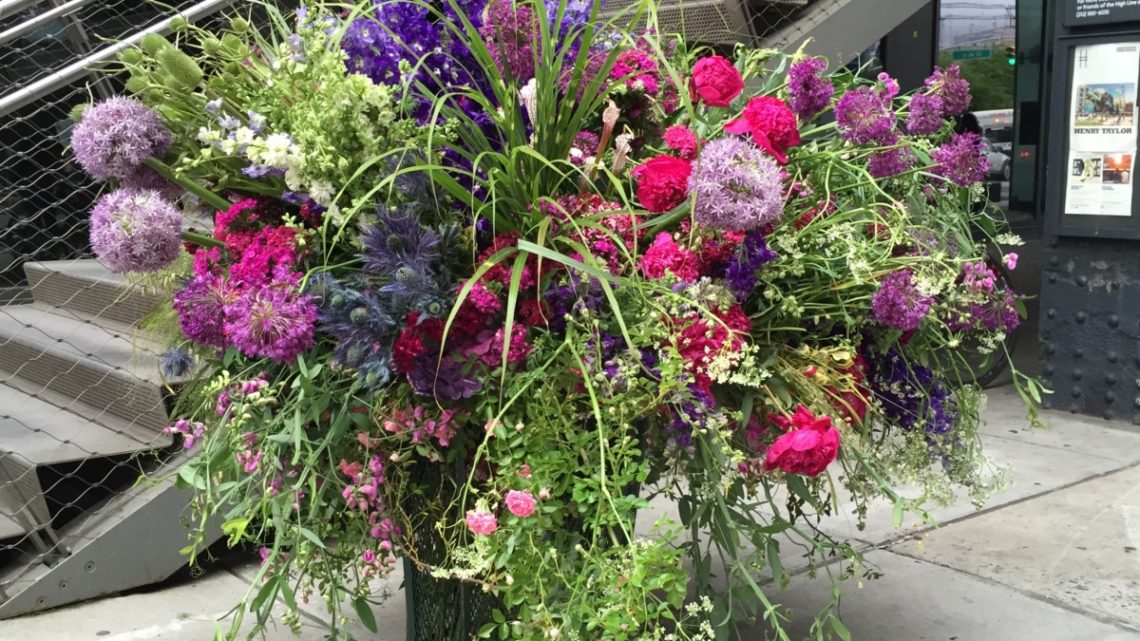 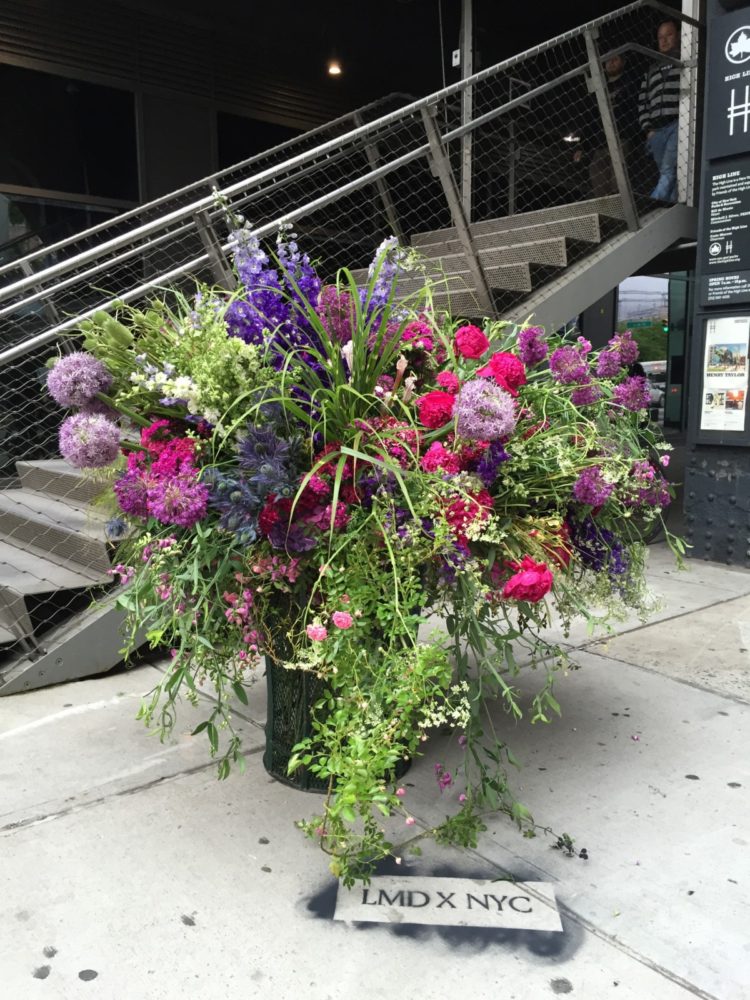 A recent Lewis Miller “Flower Flash” project was a trash bin at the base of the Highline in the Meatpacking District. Miller leaves his initials in chalk to mark the spot.

On a given day, New York floral designer Lewis Miller can be found in Midtown at the Rainbow Room prepping tables for a swanky birthday party, downtown on Wall Street readying a ballroom for an over-the-top corporate event, or out in the Hamptons creating a Garden of Eden wonderland inside a wedding tent. Working with clients like Bergdorf Goodman, MOMA, and Chanel, Miller has earned a reputation for a style that exudes lavish luxury. 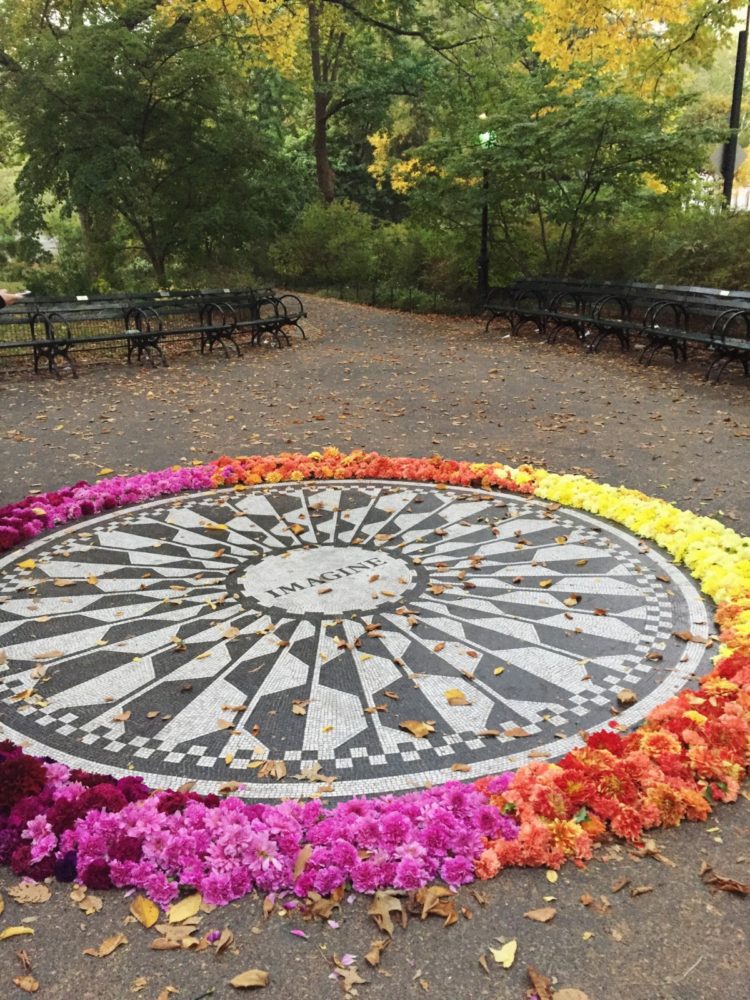 In October 2016, Miller decided to offer a slice of that luxury to the people of New York: no charge. In the wee hours one morning, the designer and his assistants loaded two thousand dahlias and carnations from their East Village studio and drove them to Central Park where they began creating what Lewis called a “psychedelic halo” around the John Lenon “Imagine” mosaic. When members of the Parks & Services crew came by at dawn with their leaf blowers, Miller was worried, but as the crew began carefully sweeping leaves away from the flowers, one crewmember gave a subtle thumbs-up. It was Miller’s first gesture of approval for his street art. 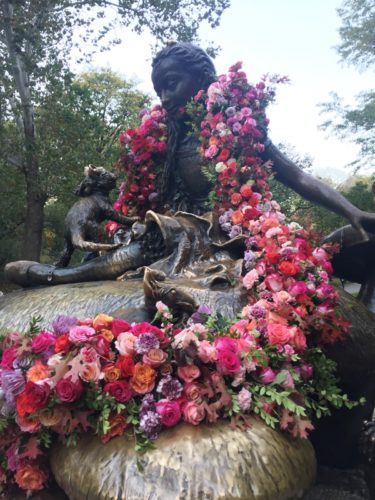 A garland of roses decks the beloved Alice in Wonderland statue in Central Park. 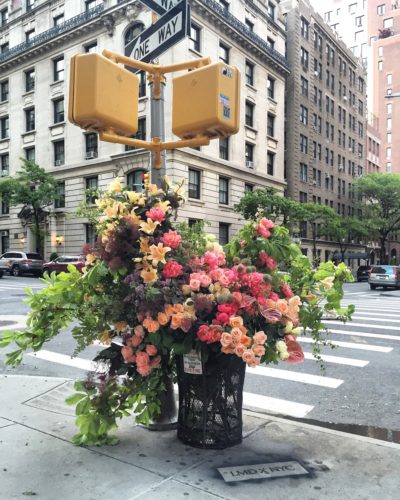 Over the last nine months, Miller has created more of these “Flower Flashes”, as he calls them, to the delight of his fellow citizens, first at iconic locations like the Alice in Wonderland statue in Central Park, and more recently in the most unglamorous destinations in town—city trash cans. “I do a lot of beautiful jobs for lovely, very wealthy people, and I enjoy that,” said Miller, “but it’s nice to give back. For years I’ve been kicking around this question, ‘How can I give a little lift, a pop of joy to people in the form of artistic expression?’”

Miller did face push-back when he came up with the idea of using city trash cans as vases. “It’s like saying that your flowers are garbage,” one colleague told him. But Miller loved the juxtaposition of lush beauty and urban grit. So do New Yorkers, who have taken to Instagram by the thousands to pay tribute, while others feel emboldened to grab a few stems for themselves on their morning commute. Even this modest thievery doesn’t bother Miller. “It’s a gift for the people,” he says of his work. “We’re in a city that’s so jaded, it’s thrilling to see how people notice. Seeing the design fall apart and explode, it still becomes art.” 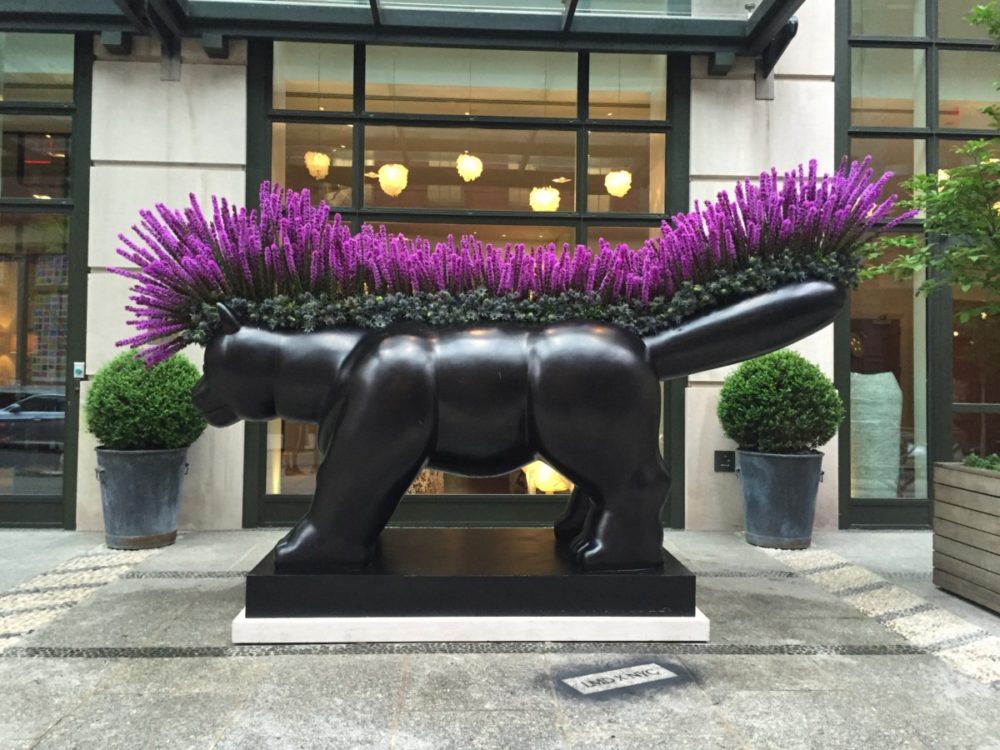 For Miller, the gratification runs both ways. “It’s been a gift for me as well,” he says. “There’s no financial transaction happening here, no brand I have to satisfy, no expectation I have to meet.” Just a man with a truck full of flowers and the hope of giving his city a little lift. 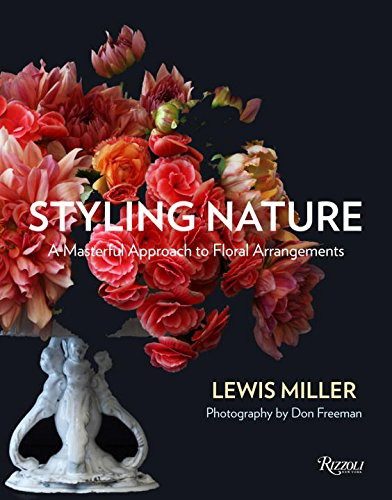 Next post Ratatouille Quiche with Arugula and Olives Recipe