Marjorie Merriweather Post created an opulent haven at Hillwood, her Washington, D.C., estate, then opened it for everyone to enjoy

Born in 1887, the only child of C. W. Post, the creator of Post cereals and the company that would become General Foods, Marjorie Merriweather Post lived a life of American royalty. Heiress, businesswoman, philanthropist, and hostess, Post owned many homes over the course of her life, including Mar-a-Lago in Palm Beach, Florida, as well as places in Long Island and the Adirondacks. In 1955, at the conclusion of her third marriage, Post—famously independent—left the Washington, D.C., home she had shared with her husband, and purchased Hillwood, a 25-acre estate nestled against Rock Creek Park a few miles north of the National Mall. She was 68 years old.

According to Kate Markert, executive director of Hillwood and author of the new book A Garden for All Seasons (Rizzoli Electa, 2020), about the estate, Post knew that this home would be her last. Excited by a new project and inspired by a sense of legacy, Post went to work renovating the house and grounds. “The more I learn about Marjorie Post, the more amazed I am,” says Markert. “In this book I wanted people to understand how very intentional Hillwood is, the inside and the outside.”

Post imagined the gardens as a series of rooms, some grand and sweeping, like the expansive Lunar Lawn, a favorite place for parties, and others small and intimate, like the dog cemetery, where Post’s beloved Schnauzers, Lady Patricia and Scampi, are buried. To bring her vision to life, Post hired first the well-known Long Island landscape architecture firm of Innocenti & Webel and later a young, promising Southern landscape architect named Perry Wheeler. The former put in place the more formal elements of the gardens, such as the French parterre just outside Post’s bedroom window. The latter took the lead on the more casual spaces, including the nine-hole putting green and the Friendship Walk. But no matter who was at the drafting table, Mrs. Post called the shots.

“Marjorie Post had a strong sense of history and her place in history.” — Kate Markert, Executive Director of Hillwood

Interestingly, Wheeler also assisted Bunny Mellon, another heiress famous for her gardens. While both women had a passion for green spaces, each had a distinct style of execution.

While Mellon was known to walk everywhere with garden shears in hand, Post was never interested in planting things herself, preferring to articulate details through plans and correspondence. And while Mellon seemed to tolerate—even promote—an organic, loose feel in her gardens (she once admonished a gardener for pulling a dandelion), Post preferred a more tidy, polished presentation. That’s not to say Post wasn’t intimately acquainted with the details of Hillwood. “She knew how to use her energy, where she could add value and where it was important to insert herself,” says Markert. In one letter to Wheeler, Post writes, “What material do you have in mind for the edging of the water basin in the center of the garden?” Post spent every afternoon walking the grounds with her head gardener. Rare was the detail that went unobserved.

With a full-time staff of 11 and a volunteer staff of 100, Brian Barr, director of horticulture at Hillwood, works to balance the integrity of the garden’s original plan with the challenges of a mature, evolving landscape. With 13 acres of garden and a greenhouse full of orchids and seedlings, there is always work to be done.

Though Barr has been on staff for 15 years he remembers visiting Hillwood 36 years ago when he was just a boy. “I grew up eight miles from Hillwood,” he says. “I always knew it. We’re probably four or five miles away from the National Mall, but it seems like you’re in this little oasis. It’s almost magical.”

Though Post valued the solace of Hillwood, she also used it masterfully as a space to bring people together. In 1958, Commander Clyde B. Ault, Hillwood’s general manager, wrote to a colleague, “This is a very busy date here. I am trying to finish up some construction work so that Mrs. Post can start her 1,000 a day garden parties tomorrow.” (Indeed, perhaps this is the only garden that warranted a commander at its helm.)

A passionate advocate for the arts, health services like the Red Cross, and civic organizations like the Boy Scouts, Post loved hosting these “1,000 a day” parties at Hillwood to support the causes she championed. In addition, she entertained diplomats, US Supreme Court justices, elected officials, and members of the military. As Post’s granddaughter Ellen MacNeille Charles wrote, Post would famously serve “huge strawberries and vanilla ice cream, all sorts of wonderful pastries, and delicious tea sandwiches on silver trays.”

“We’re only about four or five miles away from the National Mall, but it feels like you’re in this little oasis. It’s almost magical.” — Brian Barr, Director of Horticulture at Hillwood

Post died in 1973 at the age of 86. At her death, she opened Hillwood to the public. Today around 85,000 people visit each year, and in a way, they are still Post’s guests. The generosity she extended to so many during her lifetime extends to those who explore the halls and grounds of Hillwood today.

“Marjorie Post had a strong sense of history and her place in history,” says Markert. “She was comfortable in her own skin; she was comfortable with who she was. She knew her collections were worthy of being in a museum and, as a part of realizing her best self was her most generous self, she wanted the public to enjoy it.” 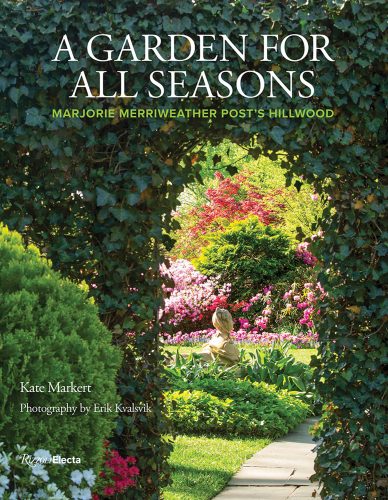