As Gioia Browne set to work creating gardens around her new home at an old farmstead, she was guided by her strong sense of style and savvy feel for color. But paramount in her priorities was always a reverence for stewardship because Little Compton, Rhode Island, has a beauty worth preserving.

Although the late 17th-century farmhouse was likely one of the first homes in Little Compton, the land was what initially drew Jim Marsh to the 13.5-acre property. While living next door, he leapt at the opportunity to buy it in 2001 before it came on the market. That same year, he met Browne, who worked in Boston but summered nearby. By 2006, they had married and joined forces to steer the land toward a unified vision, with advice from design experts.

“This is basically a country house surrounded by working fields,” says Browne. Farmed until the 1930s, the landscape was accented by various outbuildings—a pump house, two barns, and chicken coop among them—bearing witness to its agricultural roots.

Beyond its agrarian roots, the property also had a design legacy. In the 1960s, the late local garden designer Lloyd Lawton had created a woodland garden, including siting trees and shrubs where they would thrive. In the 1980s, the owners crafted undulating borders that brought in busloads of tourists and earned a segment on PBS’s The Victory Garden. The border iteration, however, did not mesh with Browne and Marsh’s style; they wanted a framework that related to the house.

Little Compton has inherent personality and history, and its slow and unstudied lifestyle was Browne’s muse from the beginning. Beneath the majestic trees planted many decades ago, Browne crafts plantings that hug the land as it rises and falls. “Roly poly land” is what she calls it. Meanwhile, the couple added more than 500 trees and shrubs to fortify the midlayer below the canopy.

To make sure her instincts were on target and to benefit from experts, Gioia called in consultants such as the late Beatrix Farrand scholar Diane Kostial McGuire who guided the process for the first five years. In addition to creating a large rock garden and a shrub walk, McGuire informed what should be eliminated or preserved. “I wanted to make sure we didn’t disrupt the visual framework here,” Browne explains.

Browne designs with sensitivity to neighboring landscapes. “Borrowed views outside your boundaries enhance the depth of your plantings,” she says. But distant views were not the only critical factor. As the garden evolved, a prime consideration always remained scenes framed from the house. “You can’t be in the garden all the time. Second best is to enjoy it from inside.”

Careful, thoughtful stewardship has always been the goal, requiring some hard decisions. A wisteria-bowered pergola was scenic, but Japanese wisteria can be invasive, so it was replaced with a native variety. Rather than installing a fancy water feature, Browne revamped an existing bog. And together with head gardener Crystal Brinson, she and Marsh expanded the woodland garden, border, rock garden, and shrub walk and created a bog and an overlook. The result has integrity, and it doesn’t shout its virtues. After all, a garden that quietly whispers is what Browne and Marsh were hoping for all along. 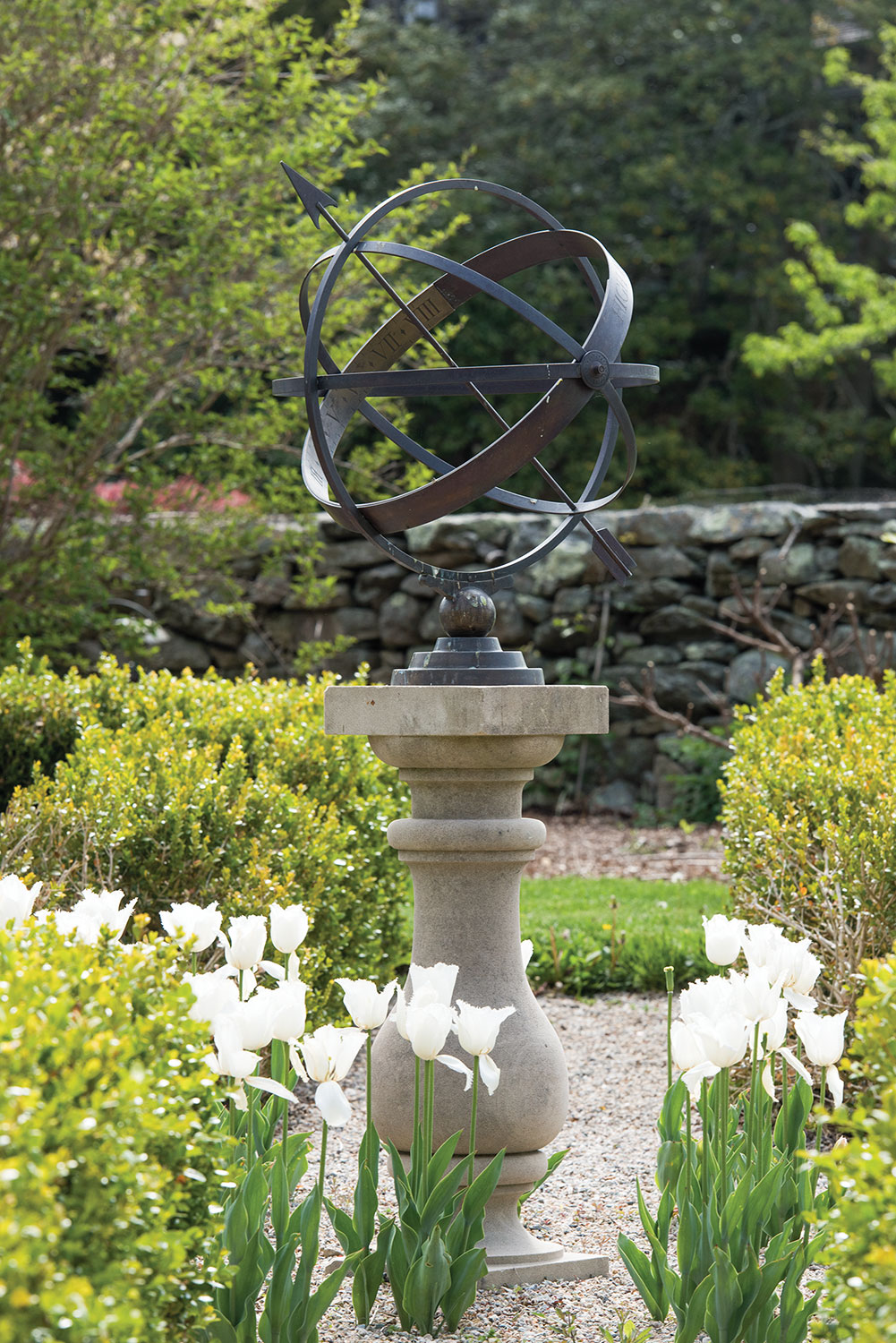 As the focal point in the center of the geometric garden, Browne had an armillary sphere made by New England Garden Ornaments to be displayed on an antique pedestal surrounded by fringed ‘Daytona’ tulips. 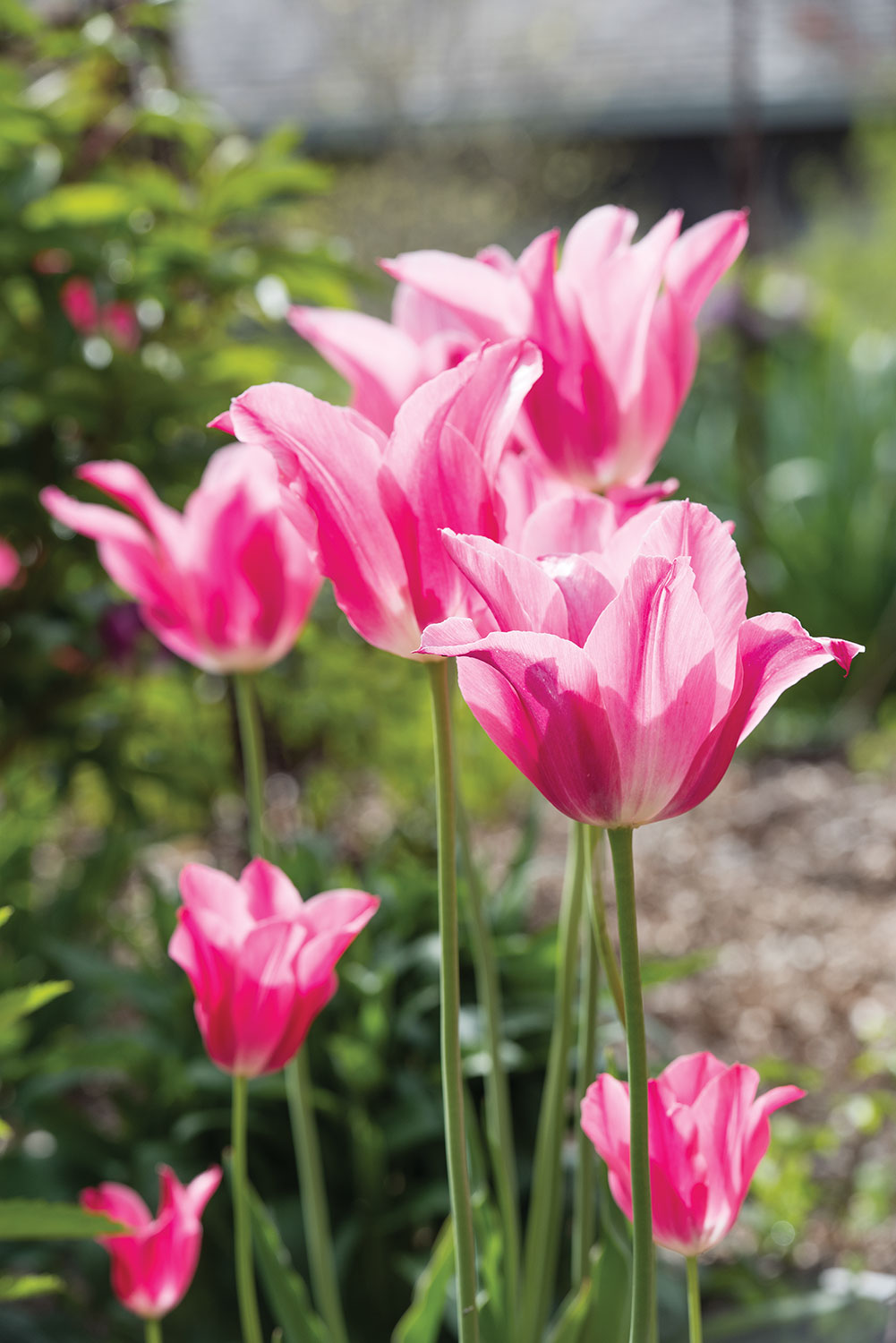 Browne selected ‘Mariette’ tulips to coincide with the cherry blossoms. 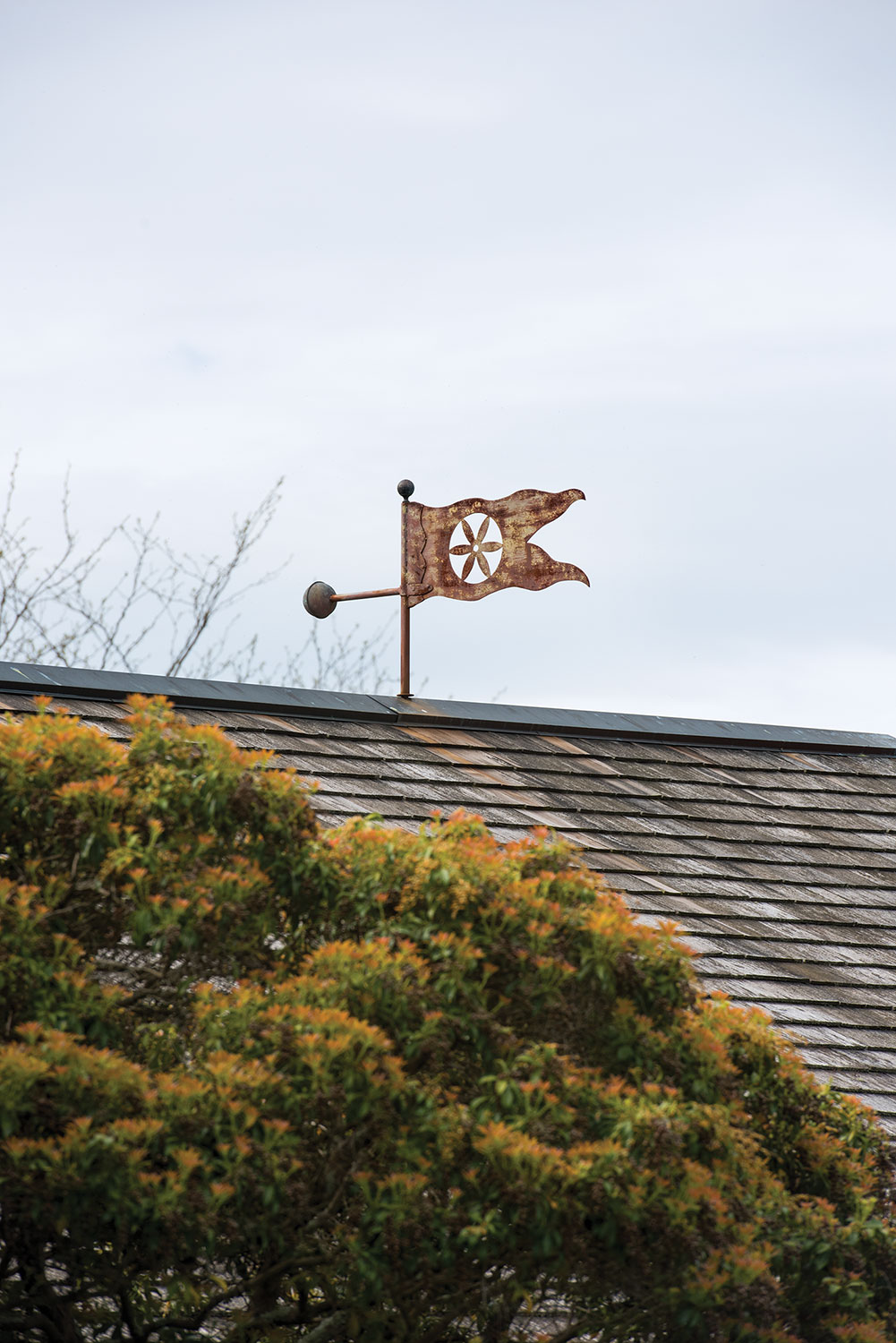 The original 19th-century weathervane was too delicate to “fly” above the summerhouse, so Browne and Marsh commissioned a reproduction. 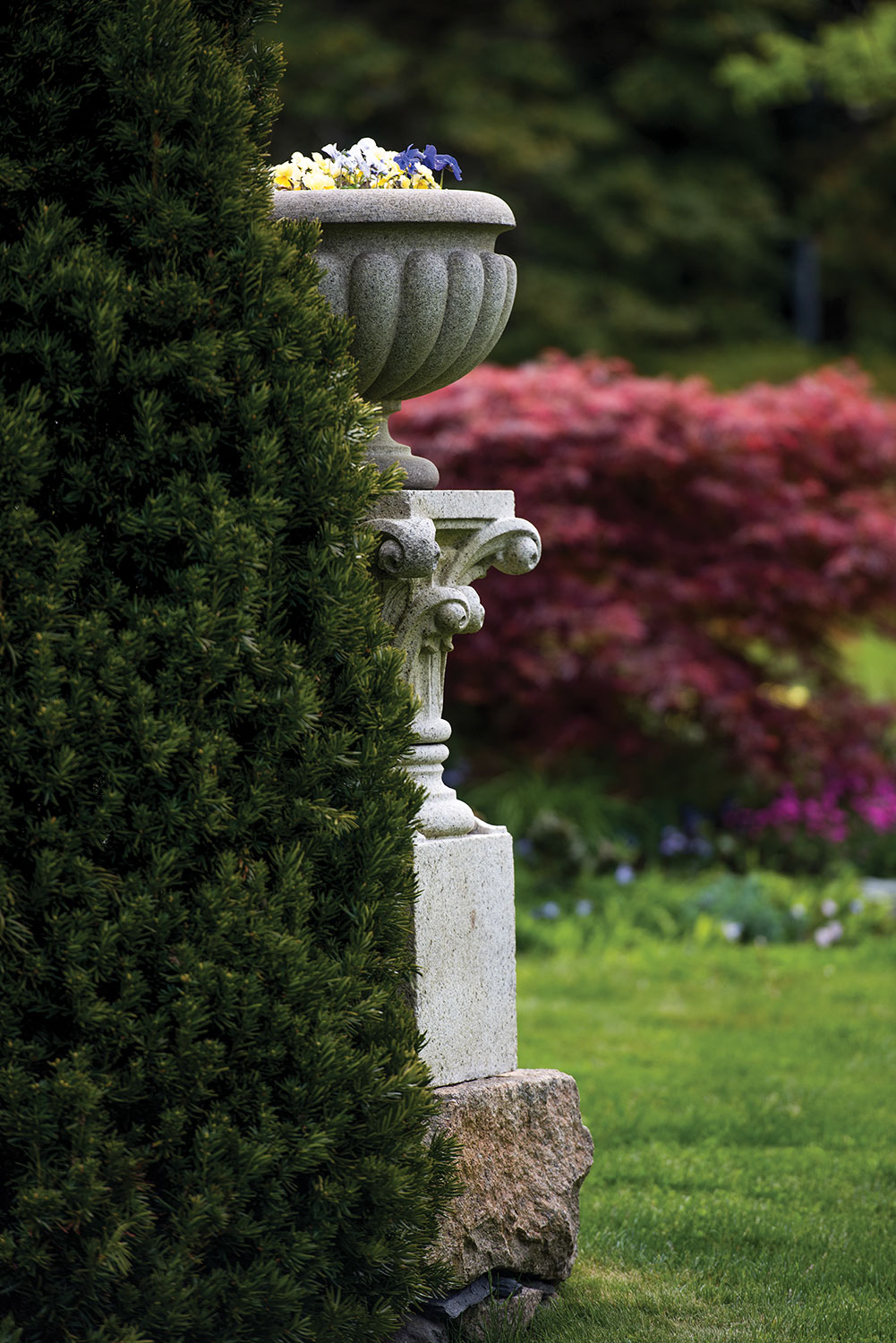 To cap a stone wall leading into the summerhouse garden, Gioia Browne found a pair of Corinthian pedestals at Passports Antiques and topped them with urns from Withington and Company Antiques. 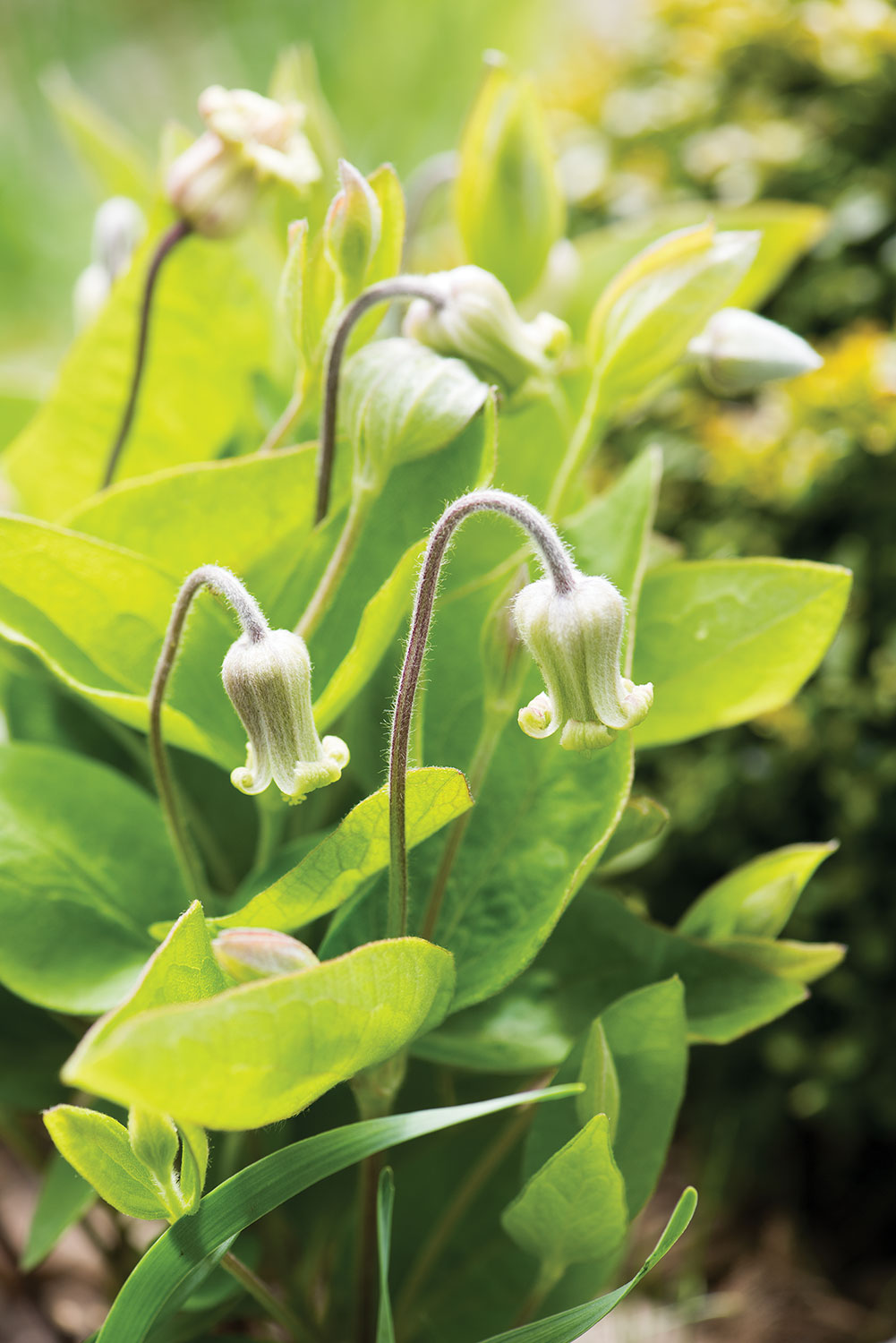 Clematis fremontii clambers over the ground rather than climbing. 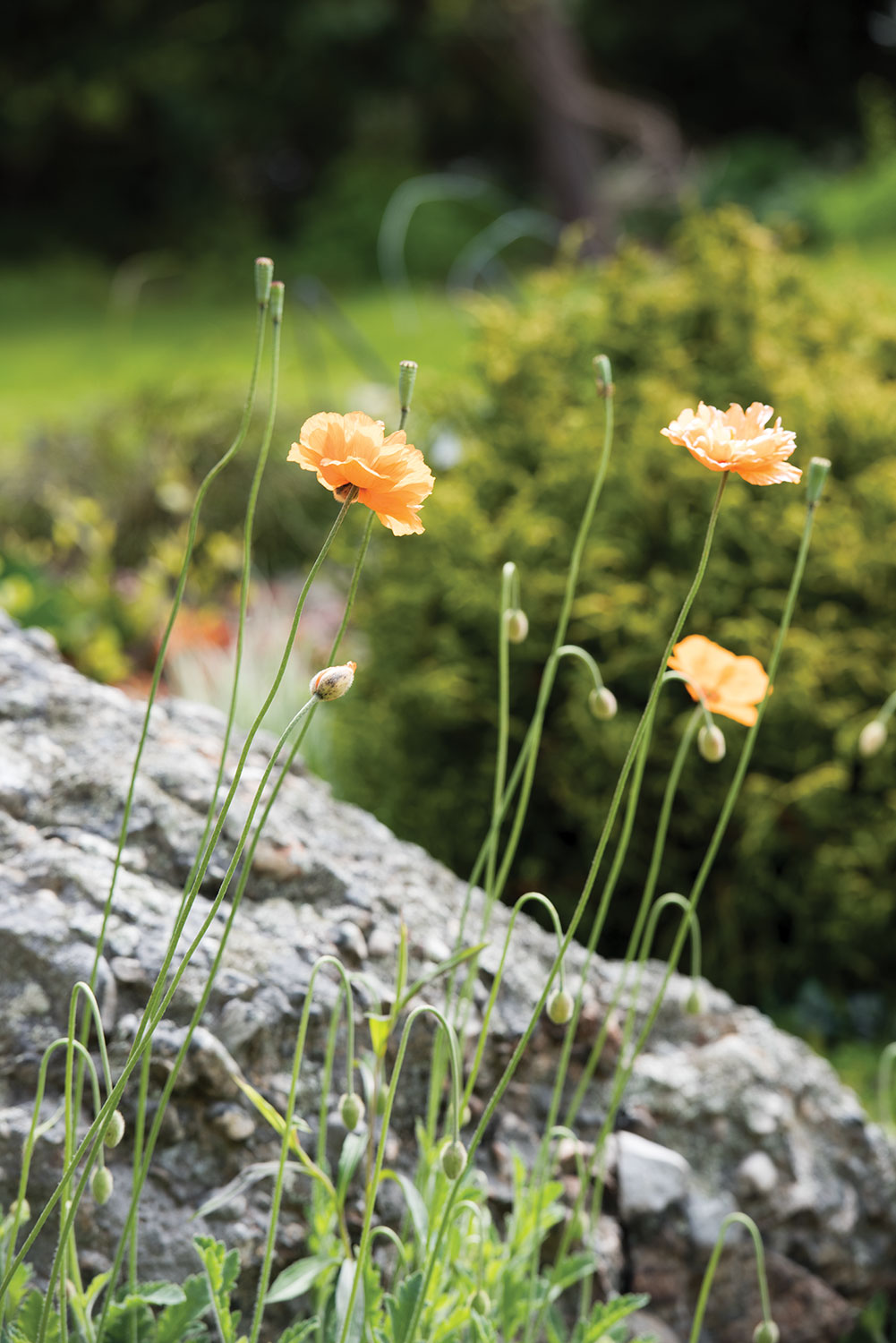 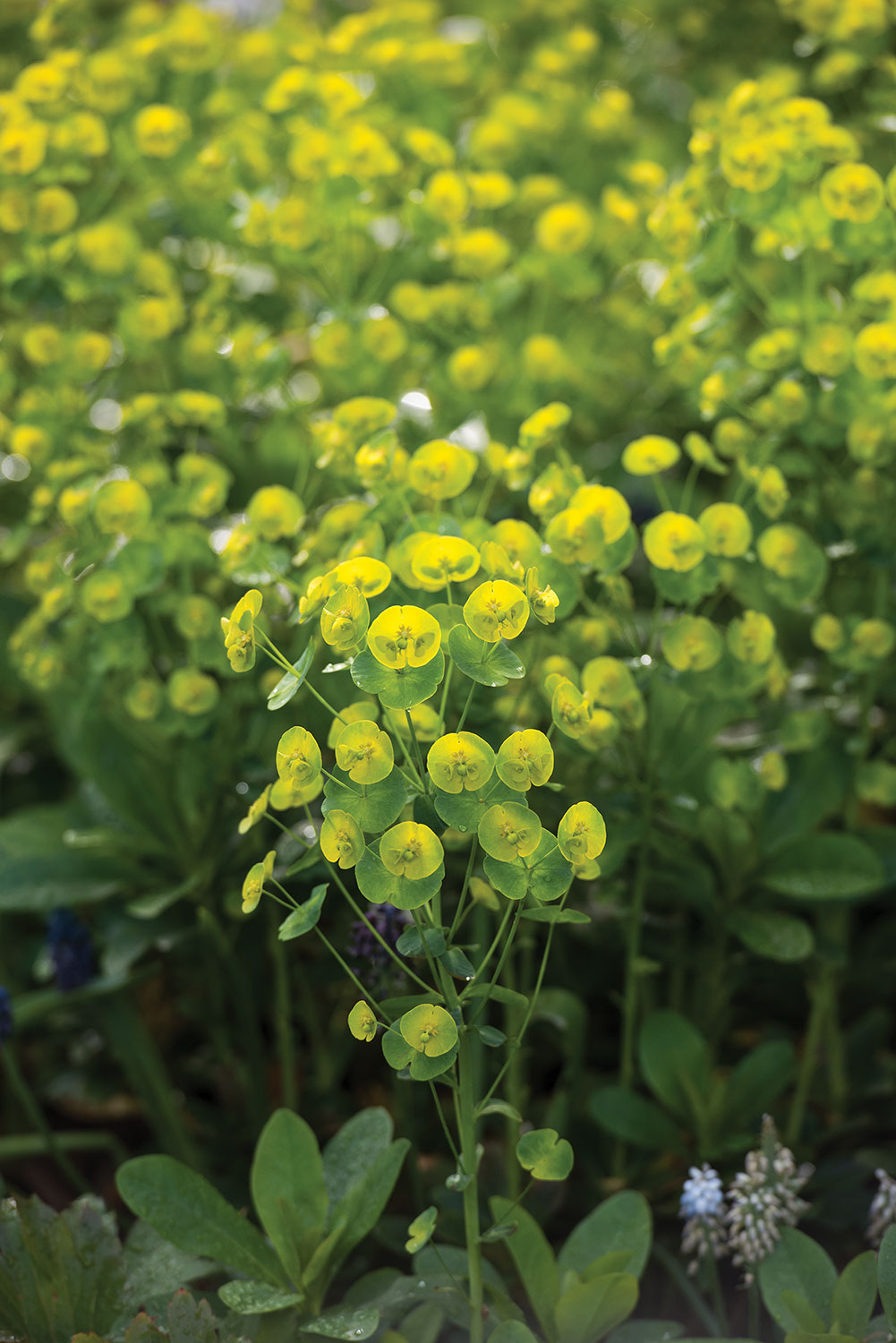 In spring, a mass of euphorbias bristles with chartreuse blossoms. 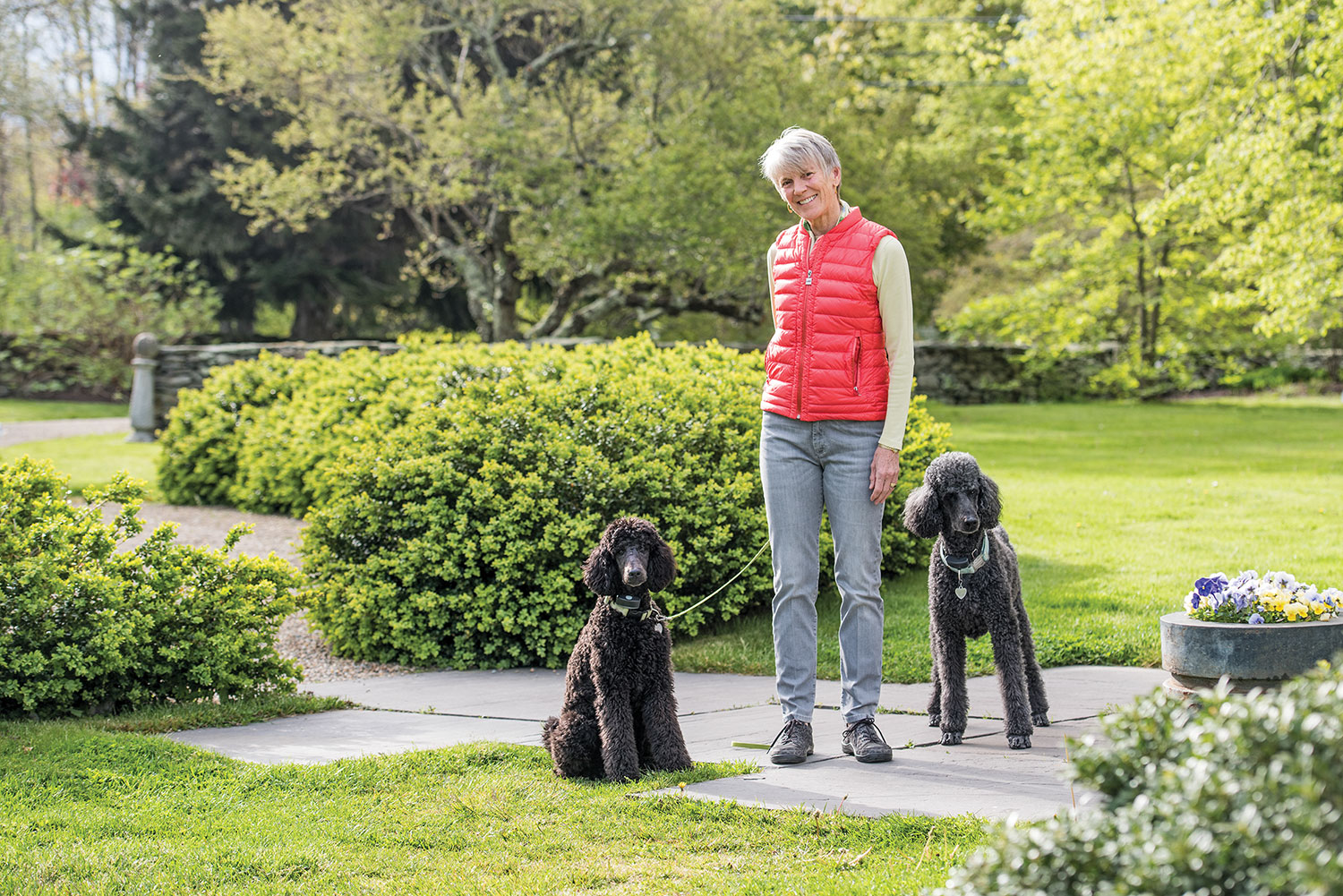 Daisy and Annabelle join Gioia Browne for her gardening chores. 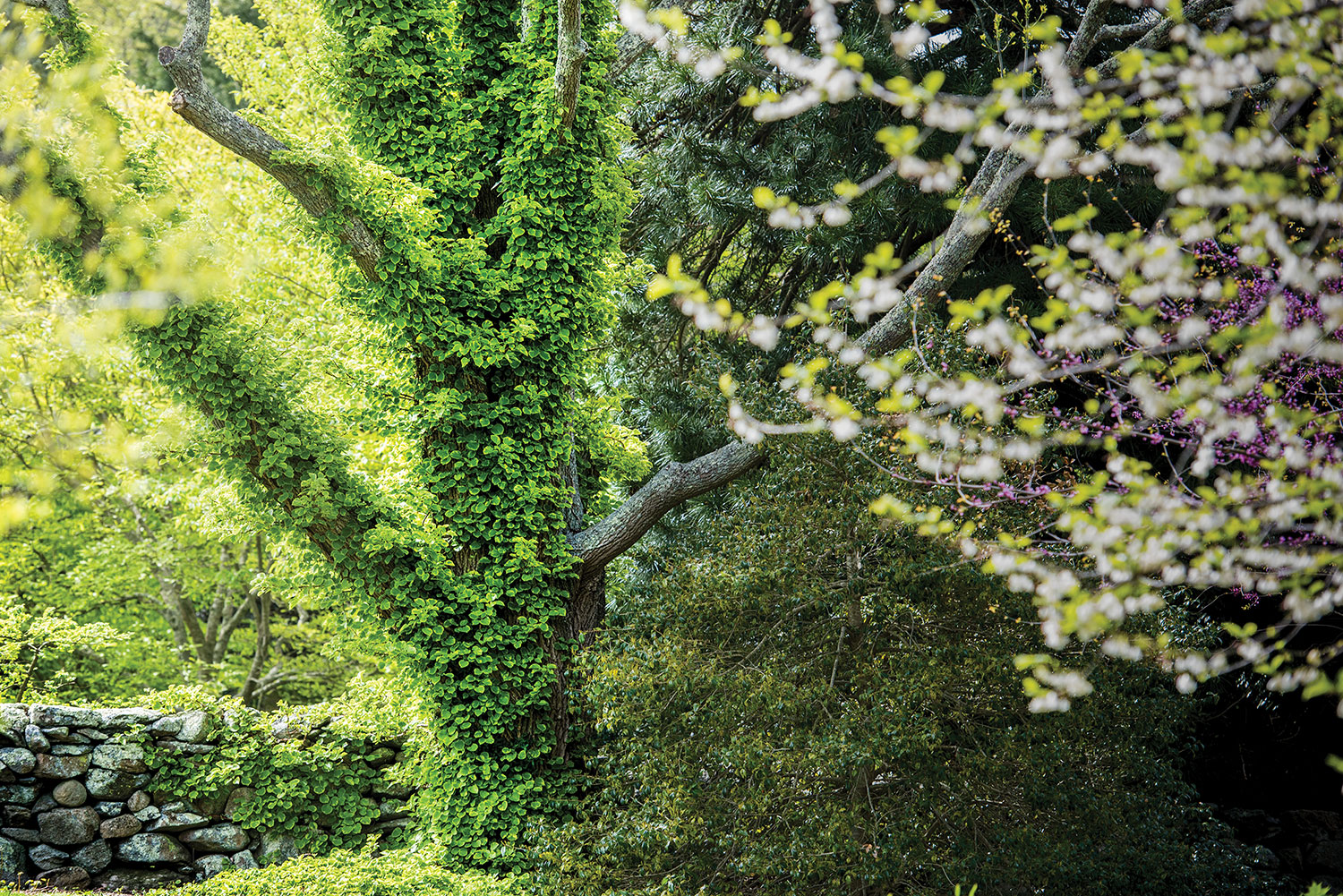 Climbing hydrangea scrambles up a tree. 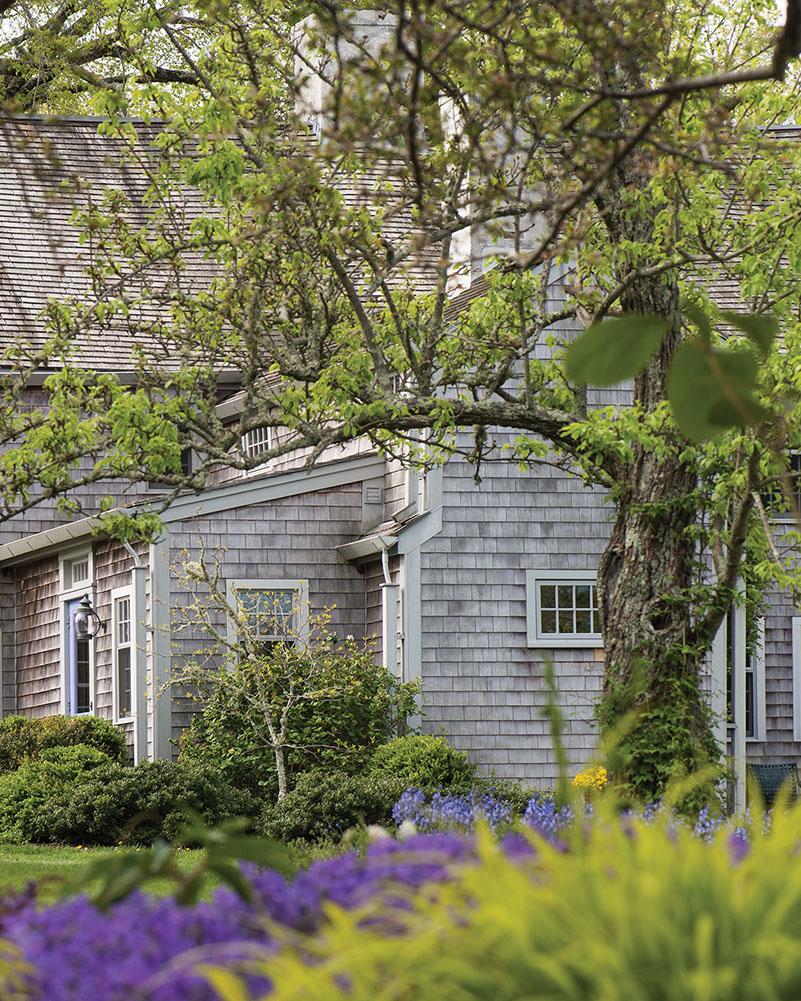 Beside the house stands “the ancient and honorable pear,” designated as such because it survives and bears fruit despite having a hollow trunk.

Gioia Brown sees the big picture. So, rather than thinking of her garden’s hues as a separate entity, she factored in the natural-gray shingle of the house with its light-gray trim. Looking into the surrounding fields, she also added the gray stone walls and outbuildings into the equation. As a result, she decided that her gardens needed richness layered against the muted surroundings. “At first, I used pale colors,” she admits. “But they weren’t vibrant enough.” Most notably, she took the French blue on the front door and the door to the summerhouse and drew it into the garden with periwinkle-hued bloomers such as phlox and Spanish bluebells. Because she tends to wear reds and oranges often, she peppered those shades into the garden to serve as subtle beacons. “I like defined areas,” she says. “I don’t want elements running together.” She avoids dark colors such as deep purple “because they create a hole.” Chartreuse stitches it all together, and mature trees form vertical accents. Most important, colors are repeated to draw the concept outward with symmetry that gives the composition structure. The effect feels uplifting—and infinitely cheerful.