A Capital Christmas with Laura Dowling 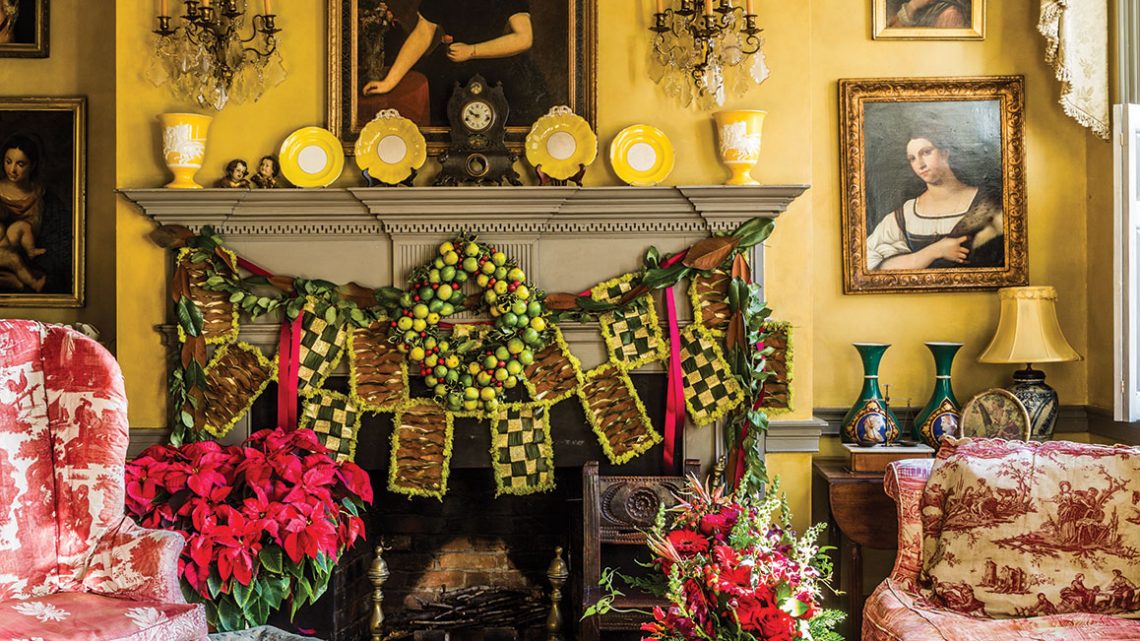 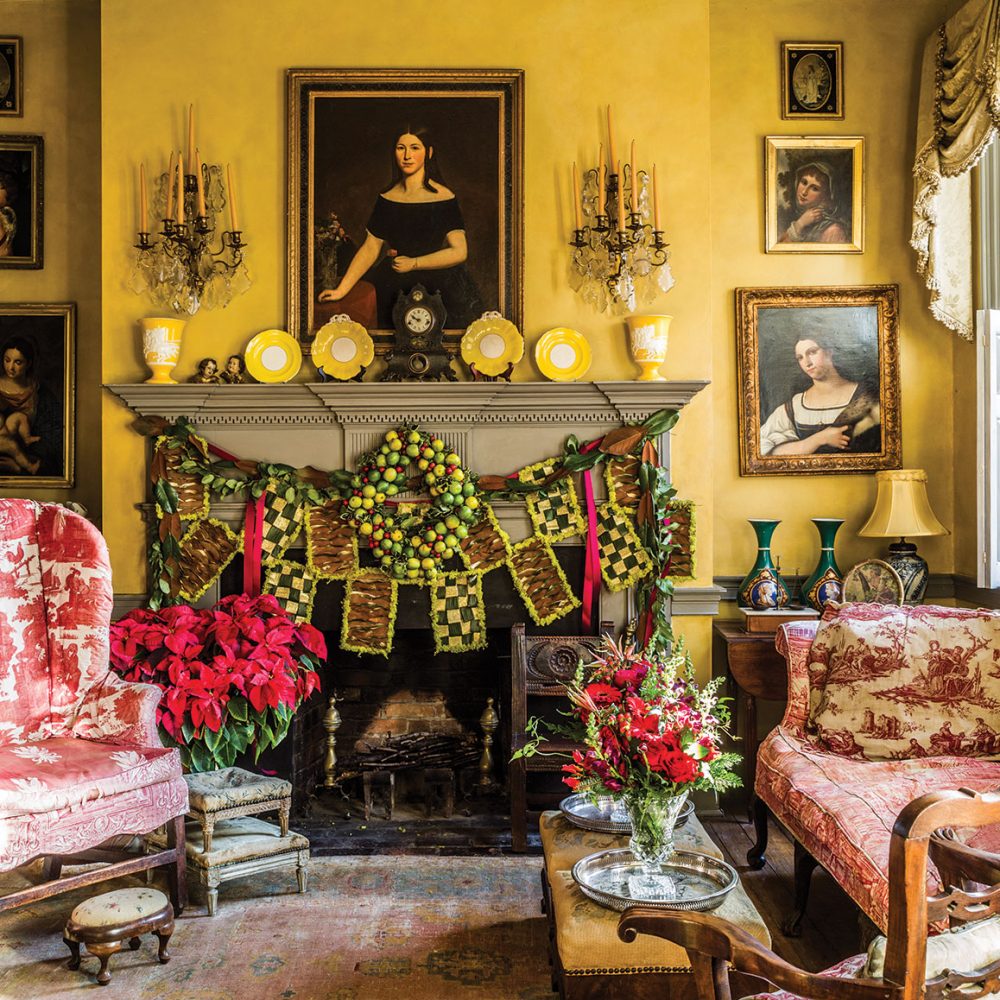 On the mantel in Laura Dowling’s parlor, a lime and berry wreath and a garland made of magnolia leaves, moss, and decorative paper command center stage, while bright red arrangements draw in the light cast by silver trays. 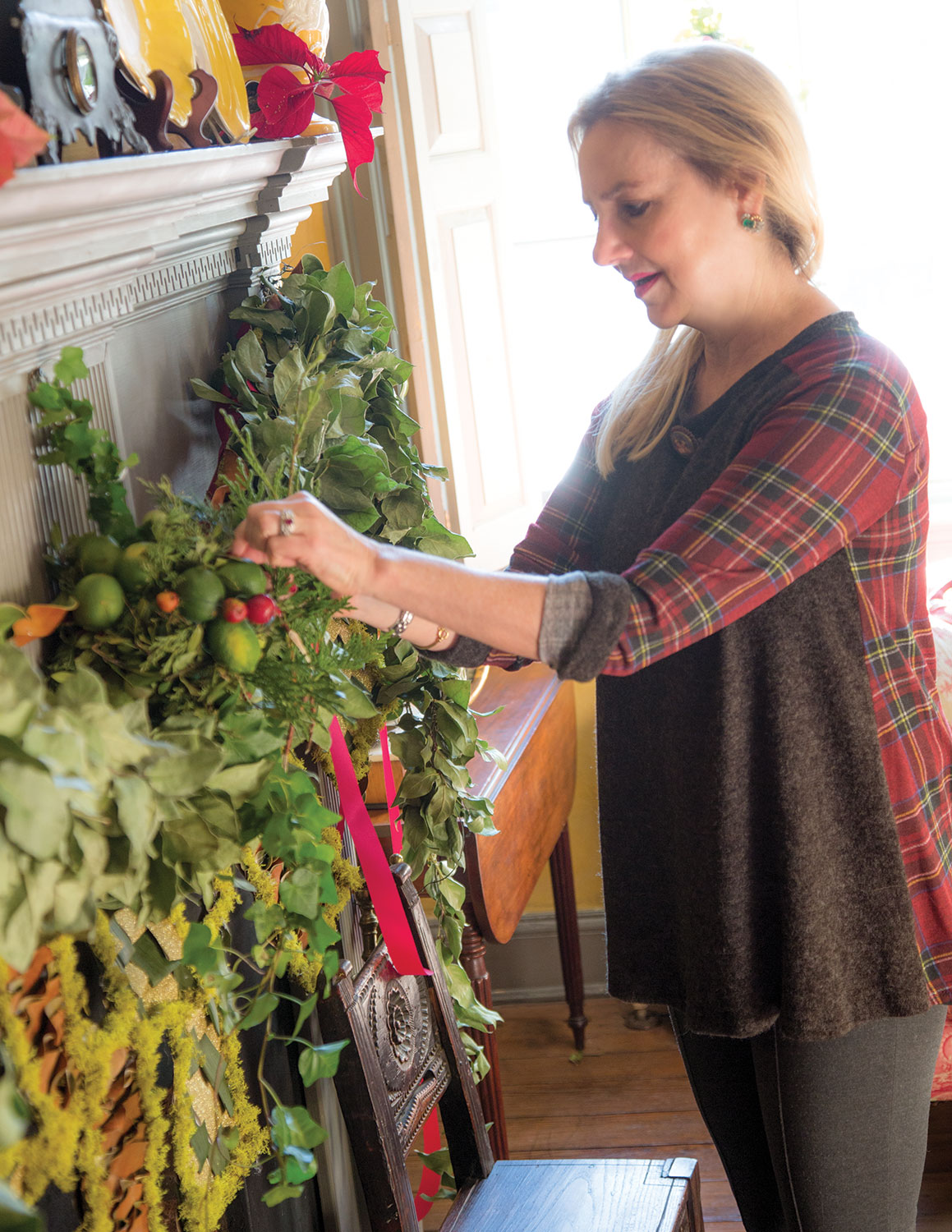 Laura Dowling puts the finishing touches on a mantel garland.

“Oh, hello! Do come in. I hope you found it all right,” says Laura Dowling, as she welcomes me into her home in Alexandria, Virginia, a historic town house that’s beautifully appointed with collections of 18th- and early-19th-century European and American furniture and layered with eye-catching decorative objects.

It makes you want to creep behind at a snail’s pace to take everything in. The effect is enchanting with wonderfully composed rooms, and with the additions of holiday arrangements and a homemade garland. 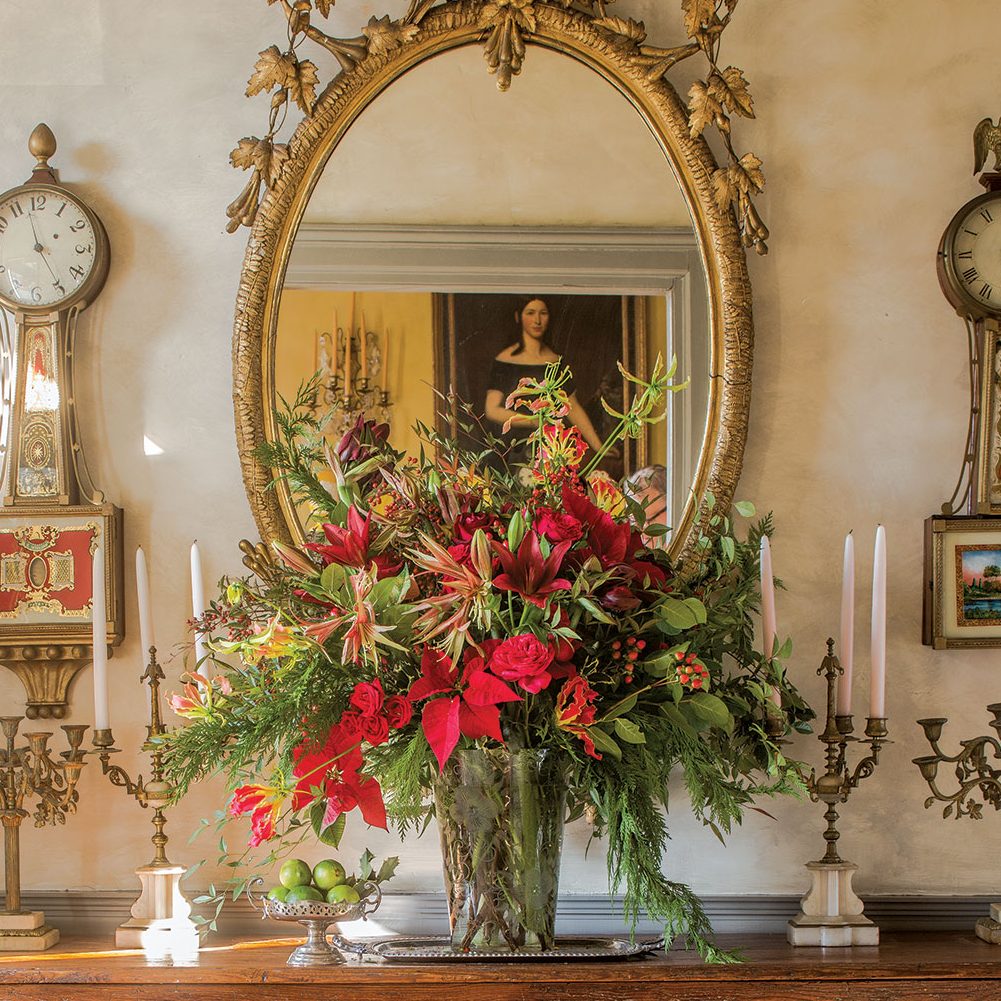 A stately arrangement of poinsettias, lilies, amaryllis, roses, evergreens, and berries remains the focal point of the entryway throughout the holiday season.

After all, it was a sightseeing trip to France that jump-started her foray into the world of flowers. In 2000, Dowling was working in public policy and strategic communications in Washington, D.C., when she visited Paris for the first time with her husband, Robert Weinhagen. While there, she was awed by the work of France’s famous floral designer Christian Tortu.

“I still remember seeing his work in the window of his boutique and thinking, ‘I’ve never seen flowers like that.’ They were put together so artistically and with such emotion,” she remembers. “That’s when I decided I wanted to learn about floral design. I later returned to Paris to study flowers. Coincidentally, Tortu had just opened a flower school, L’Ecole des Fleurs, so I studied with him and other Parisian florists.” 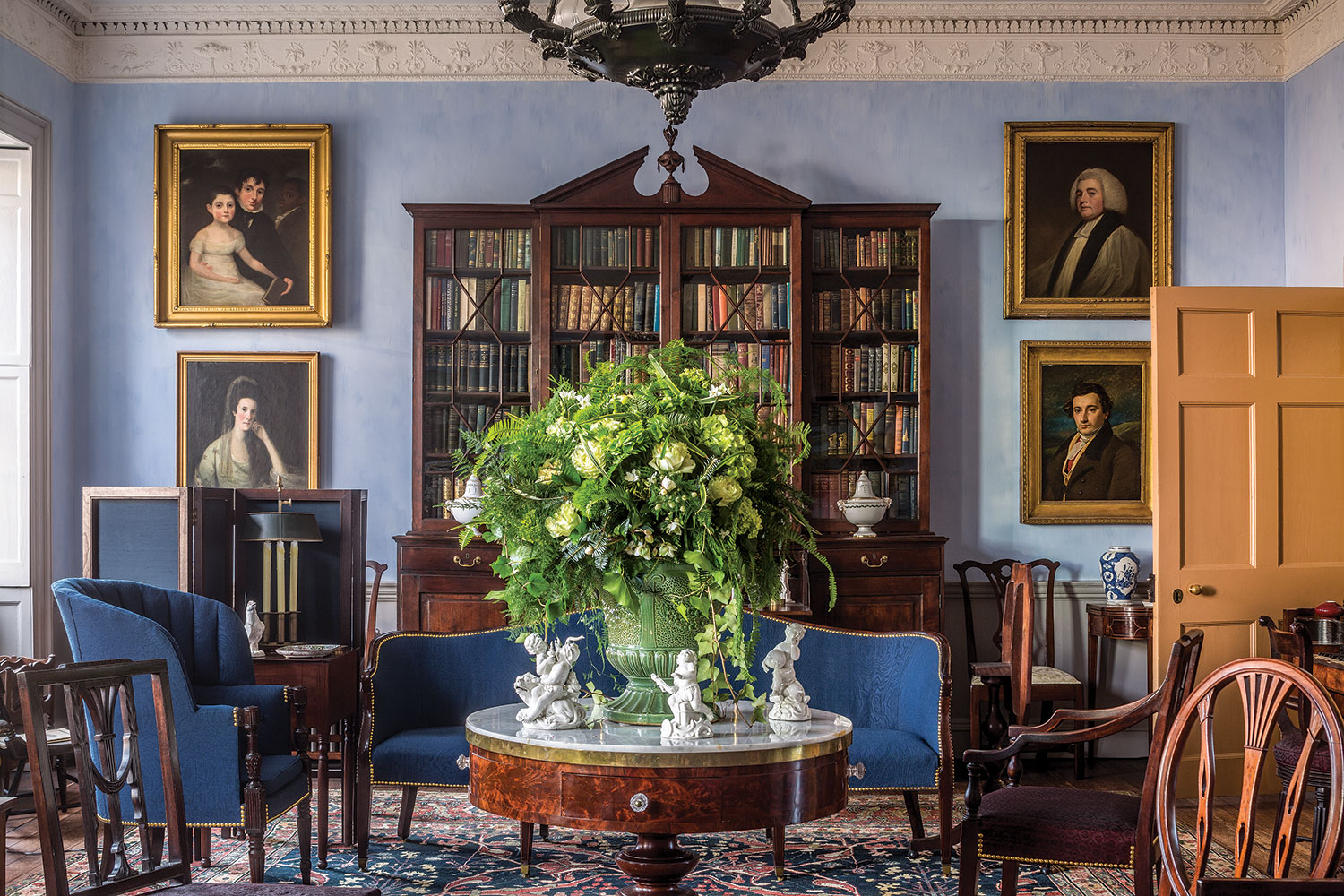 A green-and-white arrangement holds court in the parlor of Dowling’s friends, Dr. Morgan Delaney and Osborne Mackie. The 18th-century town house, named Ghequiere House after the first owner, has been beautifully preserved, with architecture that includes carved plaster moldings and weathered pine floors.

For several years, Dowling honed her craft part time out of her basement kitchen, which doubled as her studio. In 2009, she entered the competition to be the next chief floral designer for the White House. After nearly eight months, a four-hour timed competition, and a meeting with First Lady Michelle Obama, Dowling landed the job. “I think my first reaction was just, ‘Wow.’ It was that feeling of being completely surprised and incredibly honored,” she said.

“It was unbelievable to me that a process like that could work—that I could throw my hat in the ring, go through the competition, articulate a new philosophy of style, and bring in my background, which I think was unique being a part-time florist but having worked full time in politics, policy, and communications.” 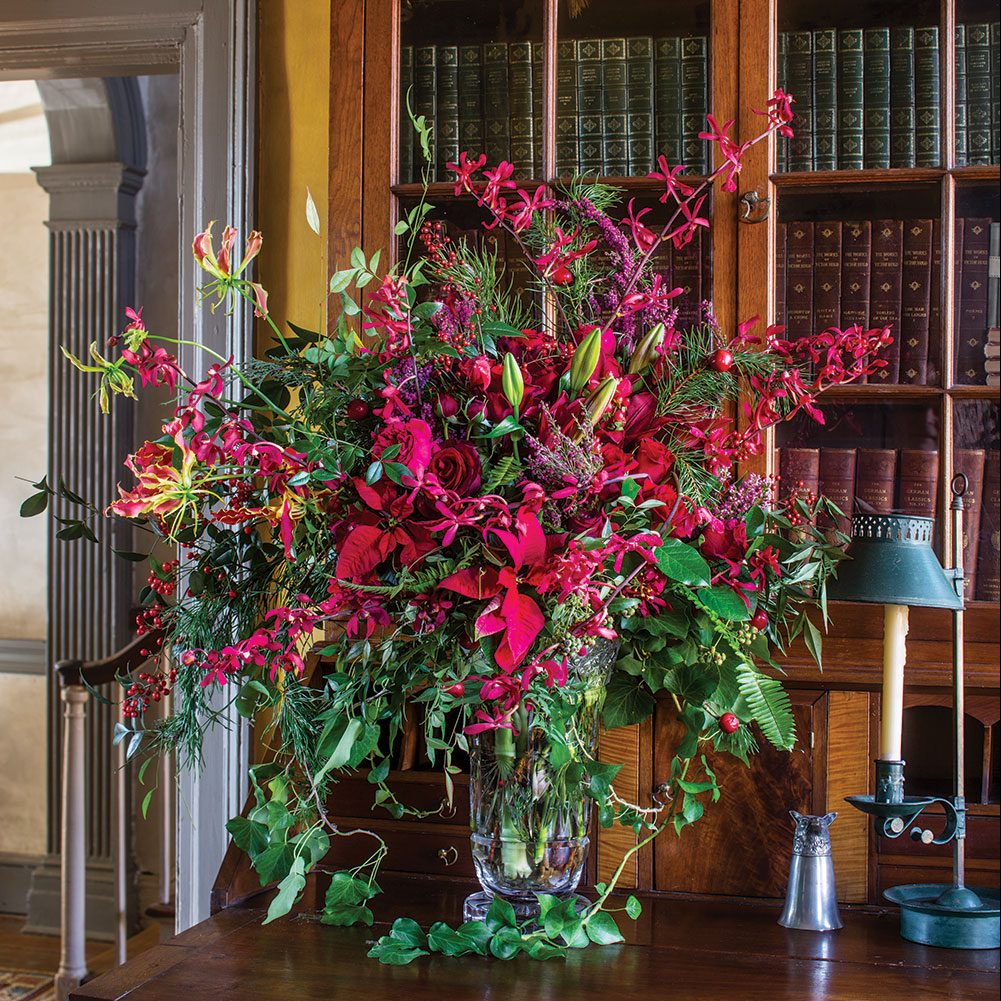 After working in the White House for six years, Dowling penned two books about her experience. Floral Diplomacy, released in March 2017, and A White House Christmas, which followed in October, both give readers a glimpse behind the curtain, so to speak. When Dowling started her new job at 1600 Pennsylvania Avenue, a new president was also starting his first term. Dowling writes about how the floral department immediately implemented new strategies to increase quality and efficiency, such as expanding the volunteer program to uphold the more than 150-year-old tradition of providing fresh florals for both everyday décor and special events. 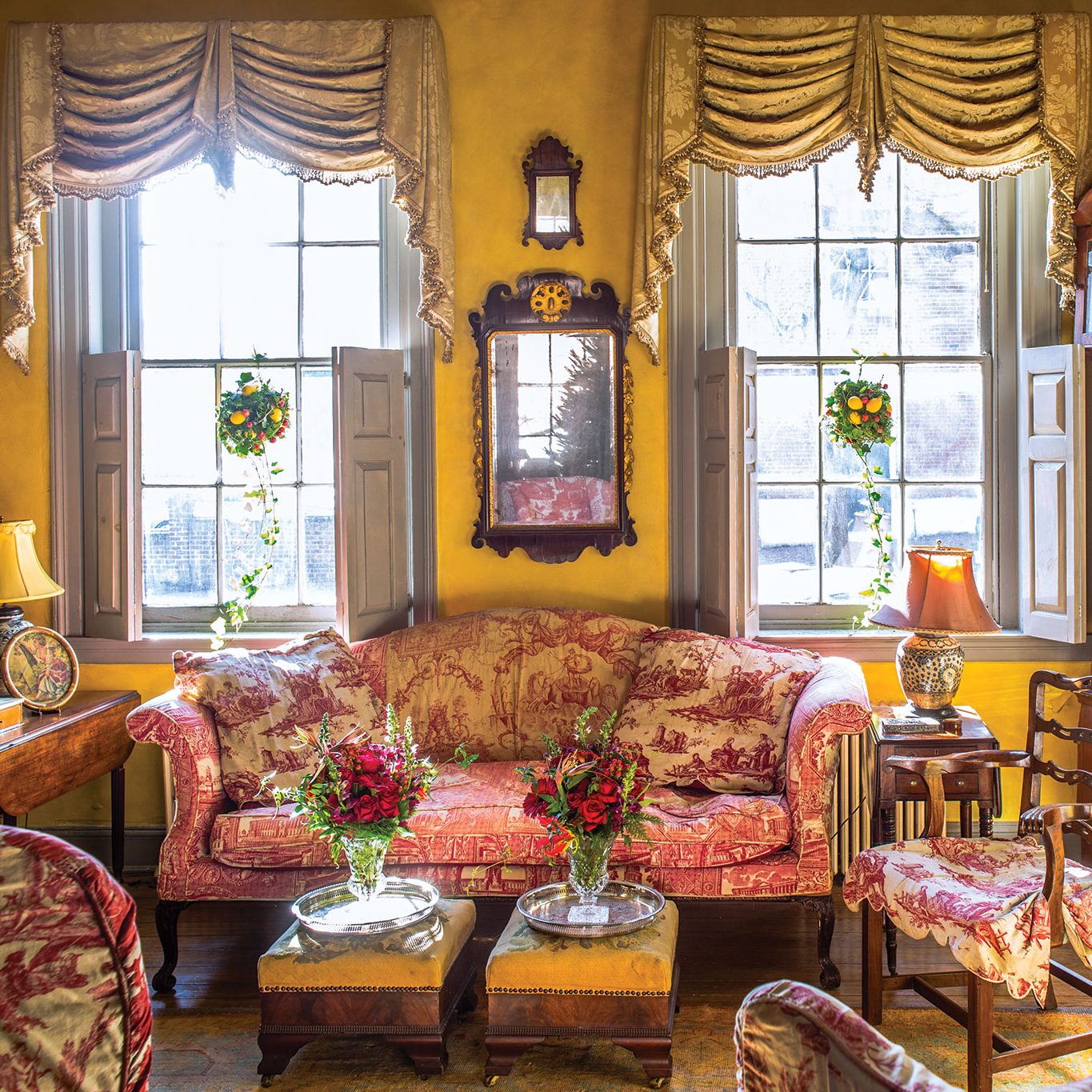 Her vision of using flowers as a policy tool also contributed to the department’s design changes. “I was bringing this idea to the table that flowers are more than just decorative,” she said. “They can create symbolism and meaning, especially on the White House stage.” Before events, Dowling would research the history and symbolism of particular flowers and rooms in order to introduce special themes, emphasize different cultures and traditions, and convey symbolic messages with her arrangements.

Out of the nearly 2,000 events she worked on, ranging from state dinners and congressional events to Super Bowl parties and diplomatic visits, Dowling says her favorite project was planning Christmas at the White House. Each year the decorations feature a different theme paired with an uplifting message to inspire Americans. Between the nearly 100,000 visitors, multiple holiday parties, and the annual HGTV special, Dowling worked tirelessly to adorn every corner of the house. 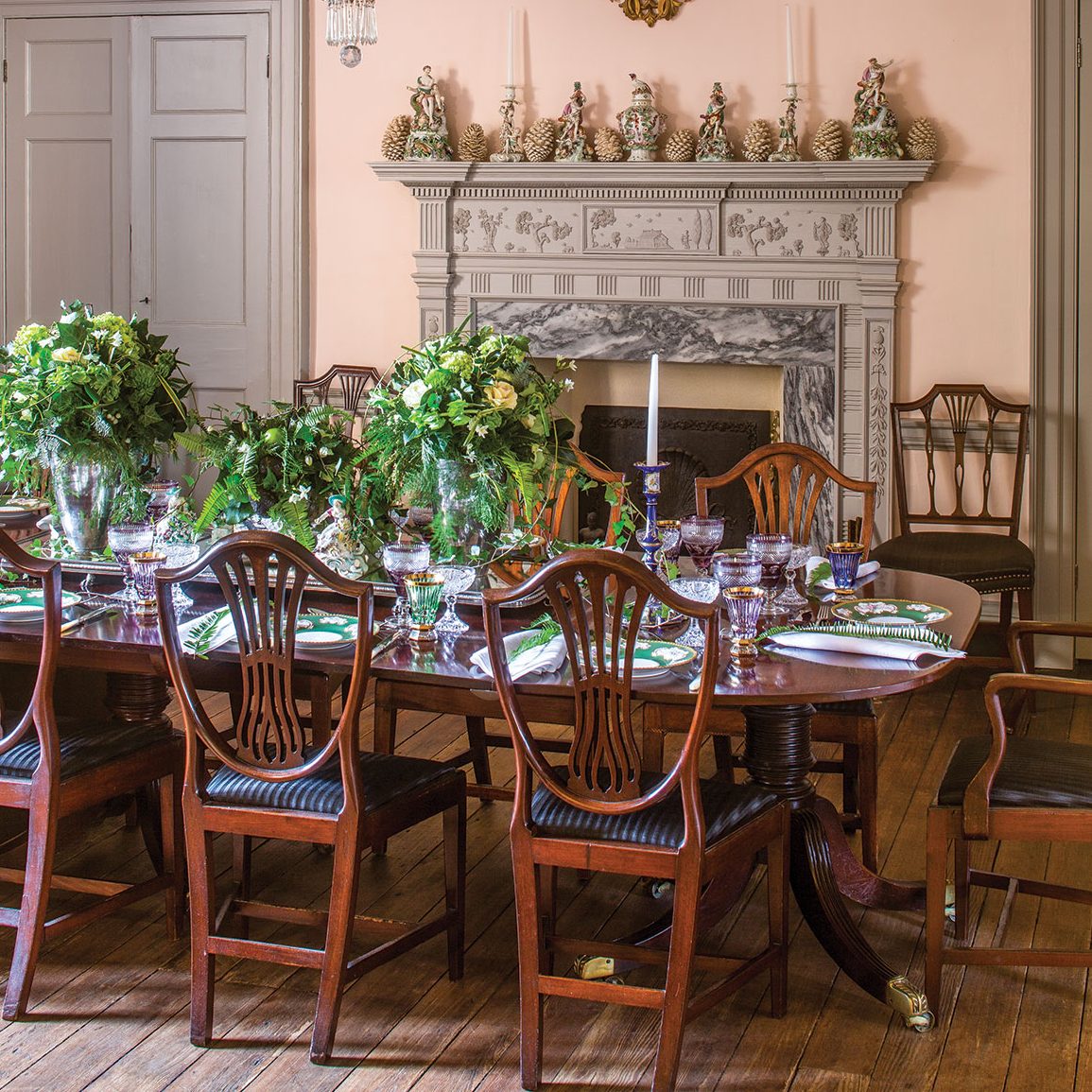 The dining room table of Ghequiere House, set for a holiday feast, with lush floral displays inspired by the deep emerald color of the plates and cut-crystal stemware

These days, when she’s not teaching classes or jetting off for speaking engagements, Dowling finds time to design. For the holidays at her own home, she uses tried-and-true techniques she perfected at the White House. From gilded fingerling potatoes to unusual evergreens, the designer loves to make an impact in the key areas of her home, which include the front door, entryway, fireplace, and windows. She says that while her personal holiday and hosting style has evolved over the years, she still loves to use easily available materials and lots of color. And although she has transitioned from decorating America’s most iconic house to decorating her own home for the holidays, her signature style—democratic in its accessibility, warm and welcoming in its effect—is always in evidence. 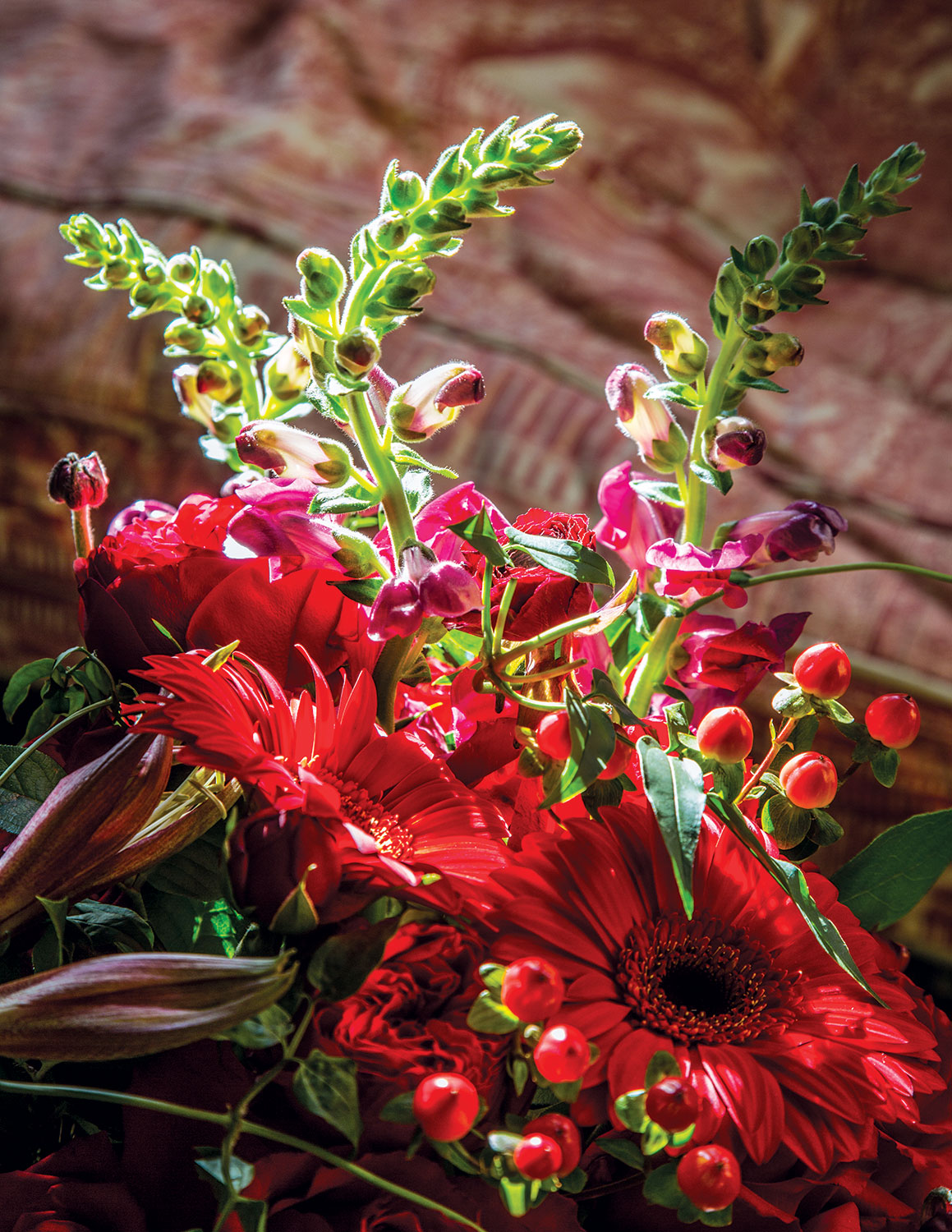 Bright red arrangements that include gerberas, snapdragons, and berries 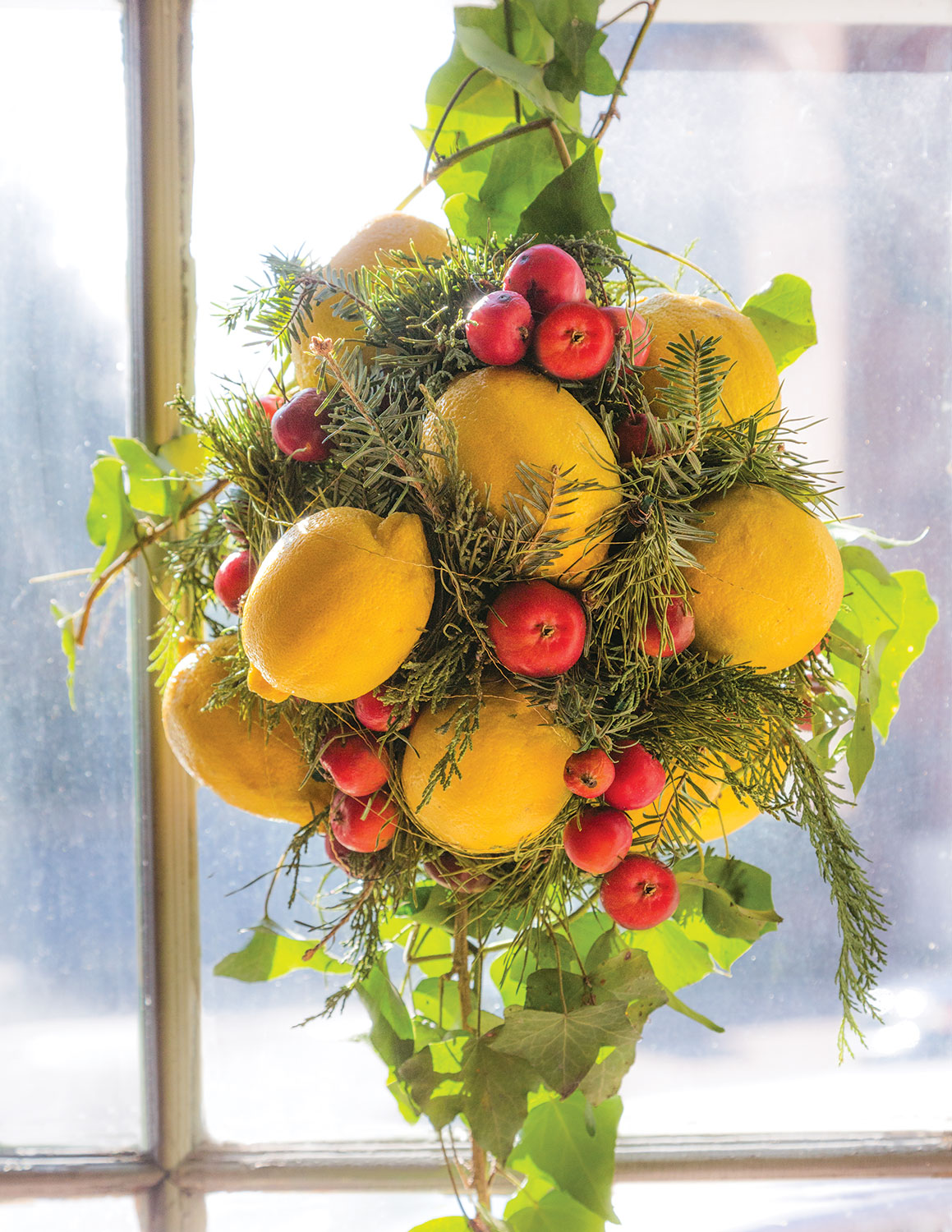 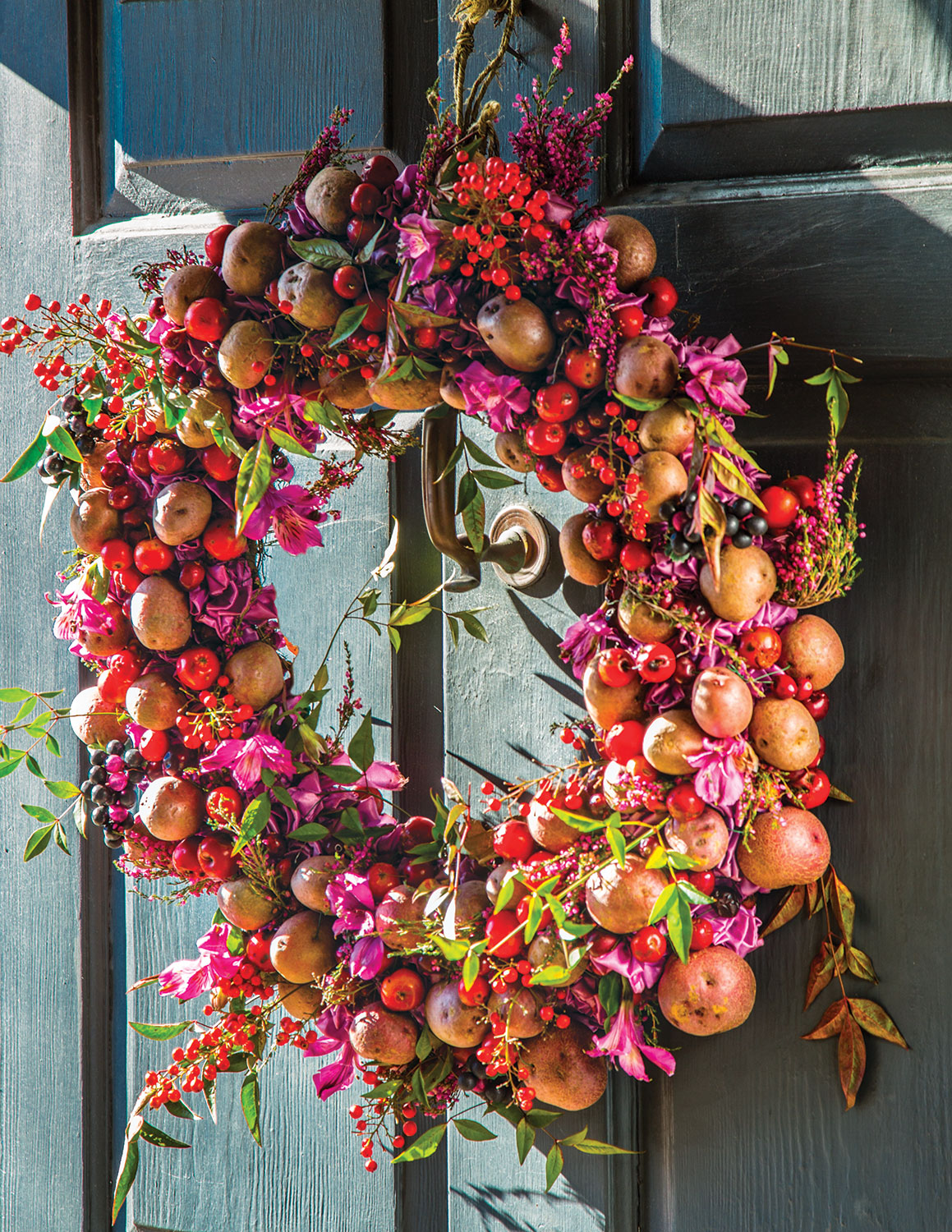 A front door wreath makes a statement with unconventional elements such as new potatoes and fuchsia blooms.

Produced and written by Jena Hippensteel | Photography by Erik Kvalsvik 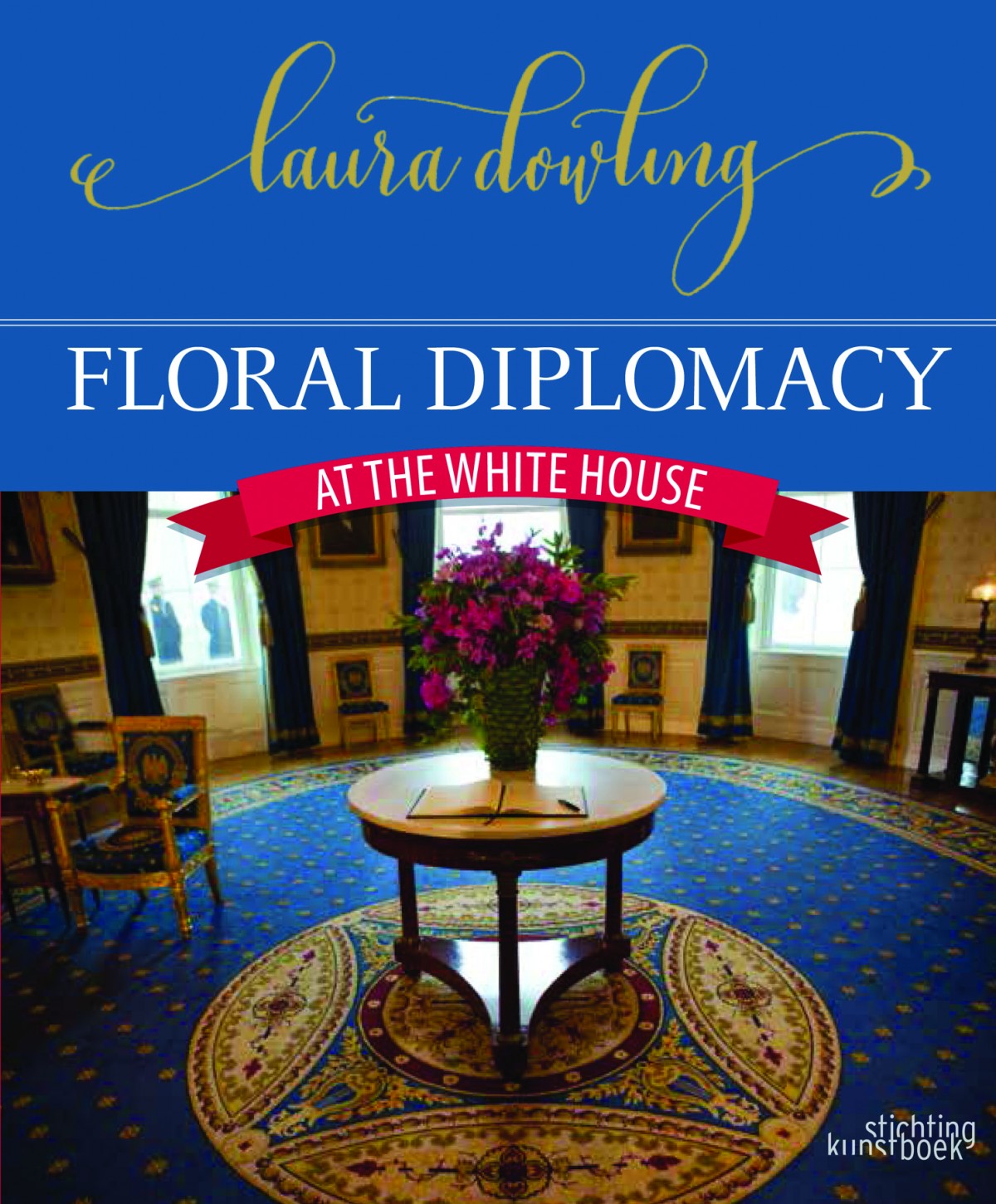 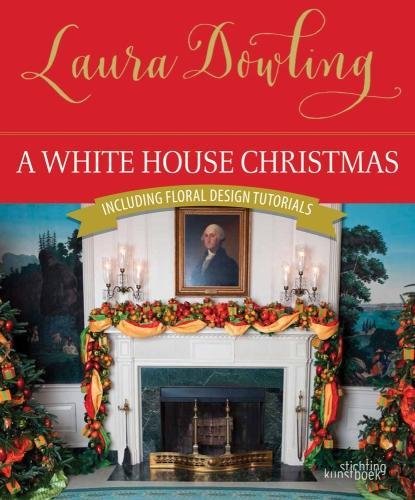 A Provençal Christmas with Alix Rico