One couple keeps the Christmas spirit alive with their pop-up shop in Lexington, Kentucky

As the rest of the world slowly builds up to the winter season, one family is already knee-deep in the holiday spirit. Starting the first of November each year, Joseph and Shannon Hillenmeyer set up camp in an open-air barn and carefully transform it into their namesake Christmas shop.

Surrounded by the sights and sounds of 1950s holiday nostalgia, customers of the Hillenmeyer Christmas Shop are transported as soon as they walk through the red-and-white barn door. “We want to convey what the season used to be instead of today’s bustle and insanity,” says Joseph. “We try to slow the pace of the season down.”

The Hillenmeyers work around the clock to ensure that every detail is perfect. There’s a roaring fire for guests to roast marshmallows; hot apple cider; visits from Santa in a vintage sleigh; ornaments; and a live nativity featuring donkeys, sheep, and a camel. “Here, it’s not just about picking out a tree,” says Shannon.

The family business began in 1951 with Joseph’s great uncle Bob, who started the seasonal Christmas shop in the barn adjacent to his main business, the Hillenmeyer Garden Center. Joseph’s father later took charge, then handed the reins over to Joseph and Shannon eight years ago. This year the shop will celebrate its 66th anniversary.

Throughout the rest of the year, Joseph works at his garden design and management firm, Joseph Hillenmeyer Garden Design. He says his landscape background has helped bring in a wider variety of greenery and products for his Christmas customers and plays into the shop’s layout, which changes every year. Since the open structure is primarily wood beams, Joseph has creative license to establish individual vignettes wherever his heart desires. He enjoys finding new ways to keep customers flowing through the building, just as if they were walking through one of his gardens. 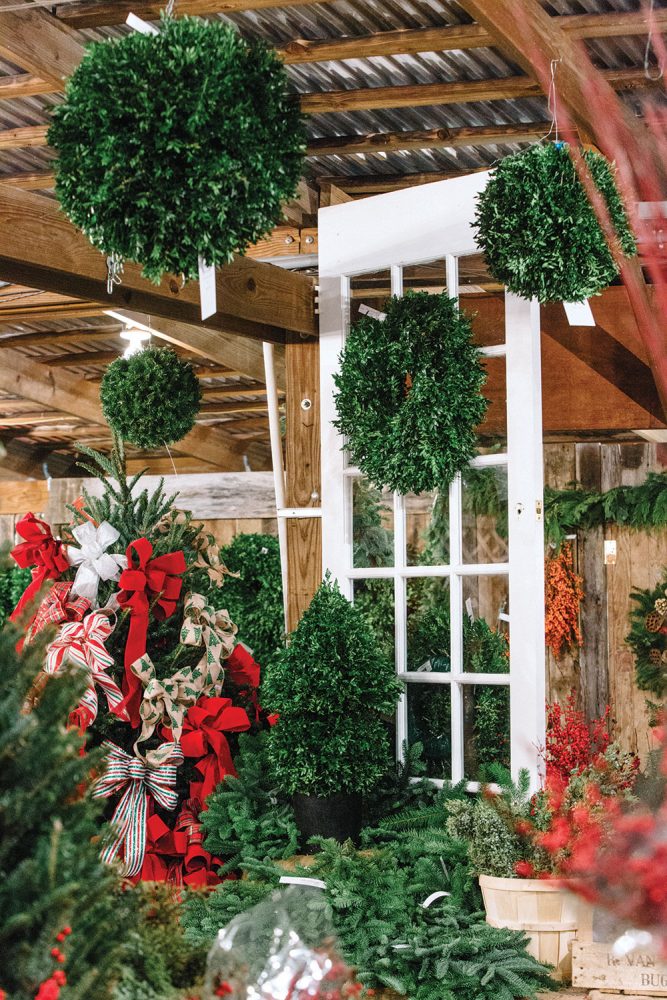 When it comes to greenery, the Christmas shop does not disappoint, carrying 30 to 40 varieties of cut greens with an assortment of locally made wreaths, garlands, topiaries, and container arrangements. Customers can choose materials such as berries, ribbon, and additional greenery to go into the arrangements, creating a custom look. The staff also offers tutorials to help customers enhance the planters and garlands they already have at home. With an eye toward the future, the Hillenmeyers give every young patron an evergreen tree seedling as a special parting gift.

“Whether it’s garden design or the holiday pop-up shop, both businesses are about trying to create an emotion and evoke a response,” Joseph says. “To me, gardens are the most ephemeral art form there is—they are always changing, moving, and growing. The Christmas shop is similar in that it’s a pop-up—we’re in and out of there. Both are very much about expression and trying to elevate people’s mood.”

Working in the garden is a long-standing tradition for Joseph Hillenmeyer. His horticultural background traces back all the way to the 1700s in France, where his ancestors contributed plant material to Versailles. Joseph learned his craft studying design in Europe, New Zealand, and Turkey and working at his father’s garden center alongside horticulturalist Don Shadow. In his own business, Joseph’s primary goal is to figure out how to draw people into the garden by creating natural outdoor rooms. Structure is a prominent theme in his aesthetic, and he molds spaces and paths to move a visitor effortlessly through the garden spaces.