Frances Palmer, the woman behind the wheel of her eponymous pottery line, crafts more than just clay. Her dahlia garden is another creative example of her artistic hand at work 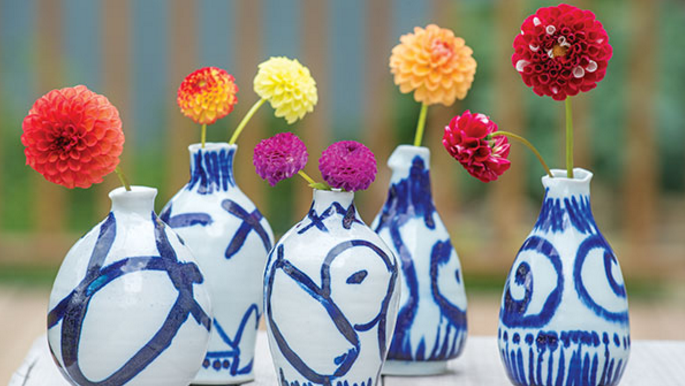 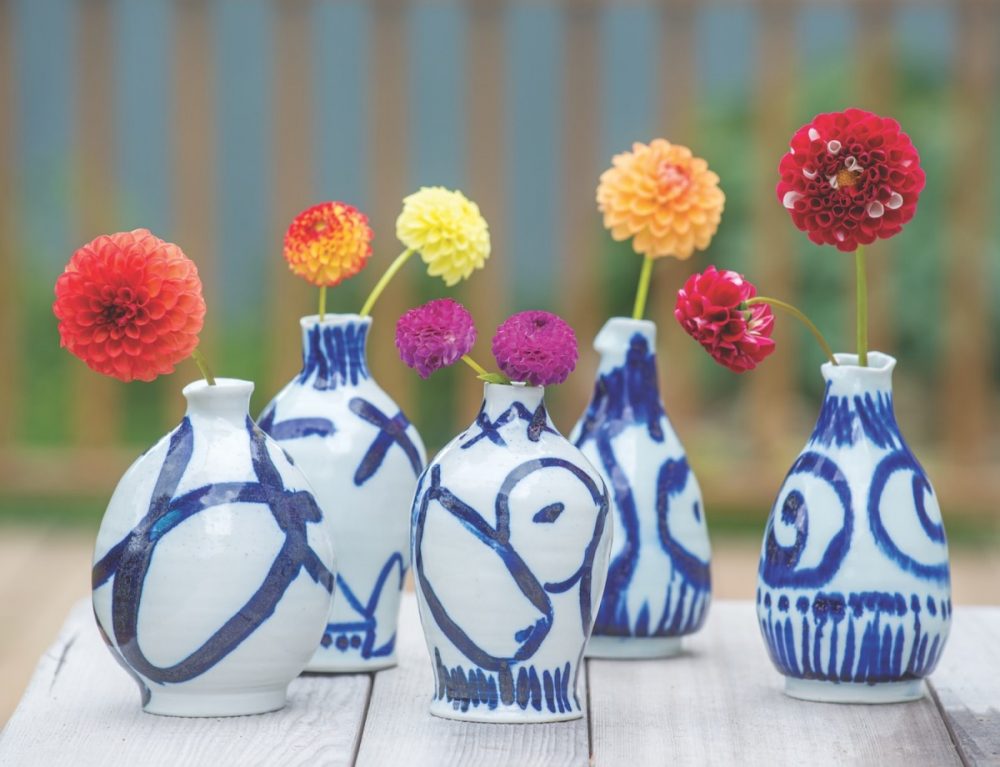 There’s one thing that the cozy little town of Weston, Connecticut, can count on. Every year, ceramics artist Frances Palmer’s front yard is jam-packed with color, especially in the fall, when her garden is invariably dense with dahlias. Although her property offers more than ample room in the back, she gardens right up front, visible to the road, so that everyone can share her enthusiasm for a flower she adores. Protected behind a see-through fence, immense flowers tumble together as a boisterous welcome to the traditional Colonial Revival house that serves as headquarters for the artist’s highly sought-after line of ceramics, Frances Palmer Pottery. As it turns out, her colorful dahlia garden and successful career blossomed simultaneously. 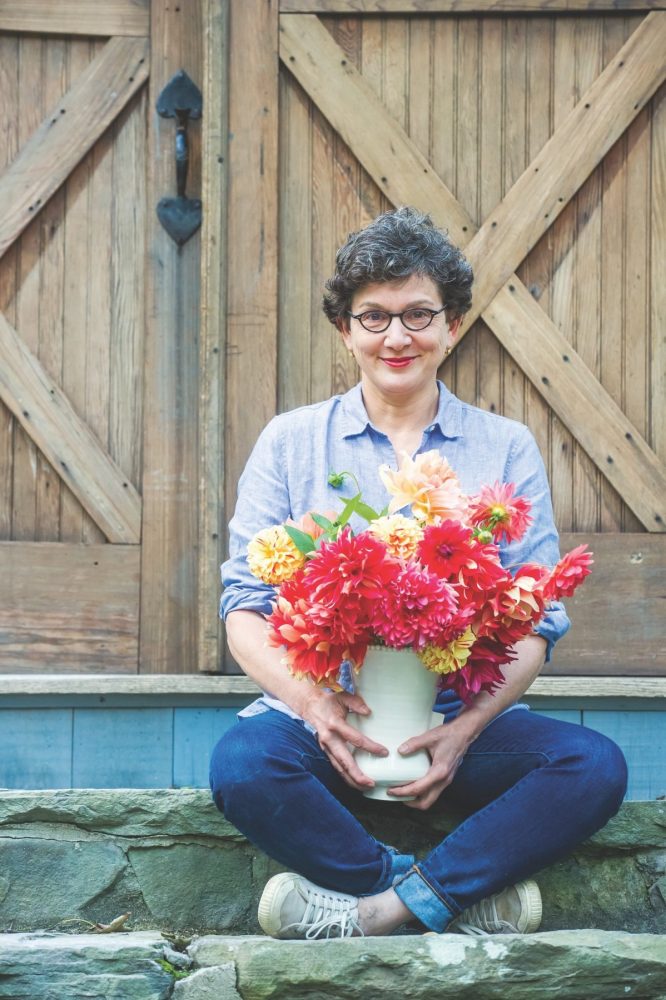 Sitting on the steps of her ceramics barn, Frances Palmer holds her August vase overflowing with dahlias. “It’s a great shape for full bouquets,” says the artist.

When Palmer and her husband Wallace started a family, they needed to upgrade from a smaller, modern house surrounded by minimalistic plantings. What they found in the search was an 1854 house on six acres of land in a quiet Connecticut town.

Previous owners had created a circular plot of pie-wedge beds not far from the road, but what remained was “pretty much just the footprint,” says Palmer. The few plants still there were nibbled down to nothing because of the local deer population. So she fenced the beds—installing a tall, wire-stock fence that allowed her to grow flowers that might be on the deer’s menu. Palmer was in the process of rejuvenating her plantings when she beheld her first dahlia garden at the San Francisco Botanical Garden. Every plant was labeled, so she went around with a pad and pencil, writing down names. Then she contacted the local dahlia society for mail-order sources. 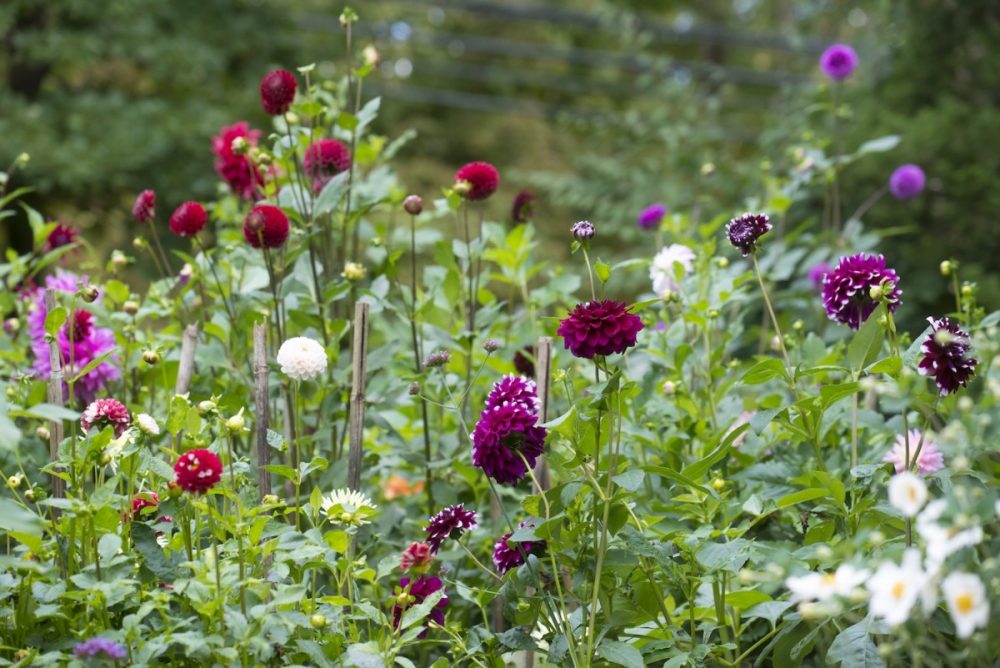 A section of Frances Palmer’s dahlia garden filled with red and purple blossoms.

Everything about dahlias excited Palmer: their geometry, their wild array of forms, their suffused color spectrum—even their precise arrangement of tucked-in petals within a blossom. She decided to devote her newly renovated garden to dahlias combined with other complementary flowers, including annuals such as zinnias, nigella, nicotiana, poppies, sunflowers, and self-sowing amaranths. A slight redesign of the garden was necessary. Palmer wanted rows that would pack maximum profusion into the space. 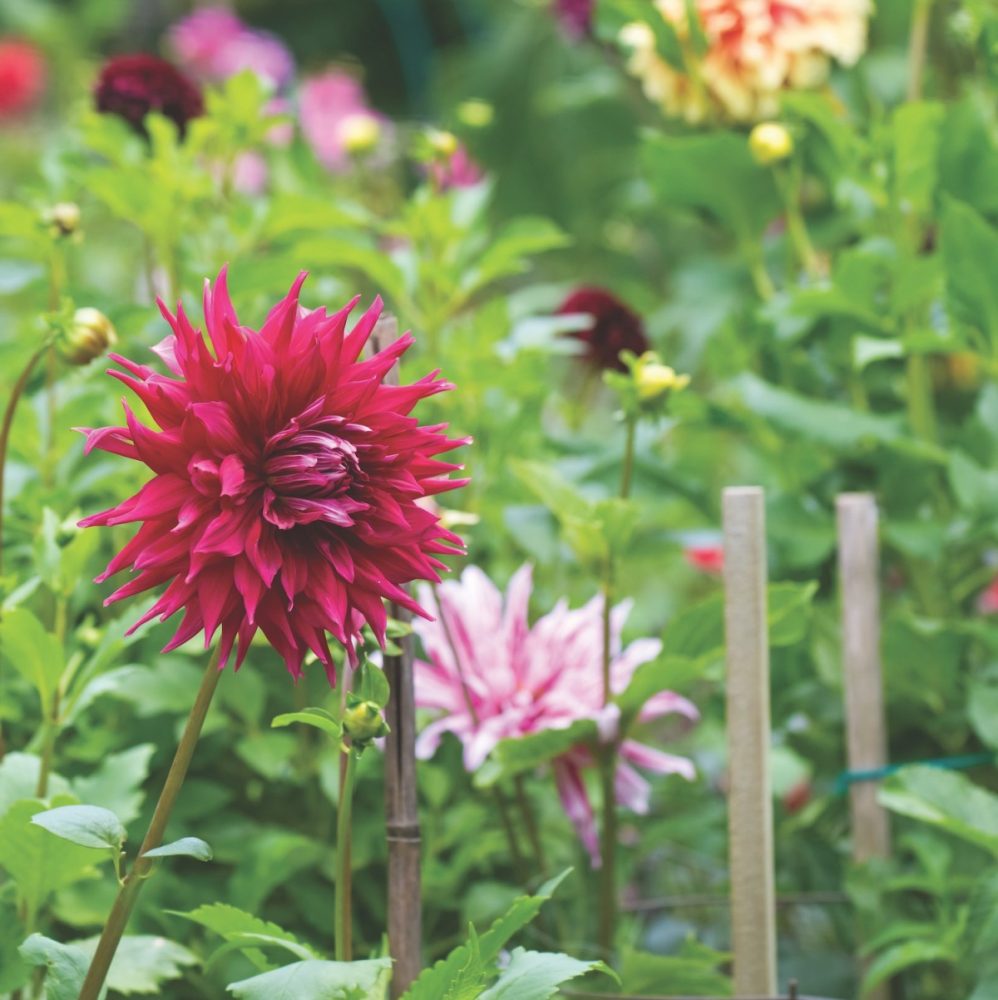 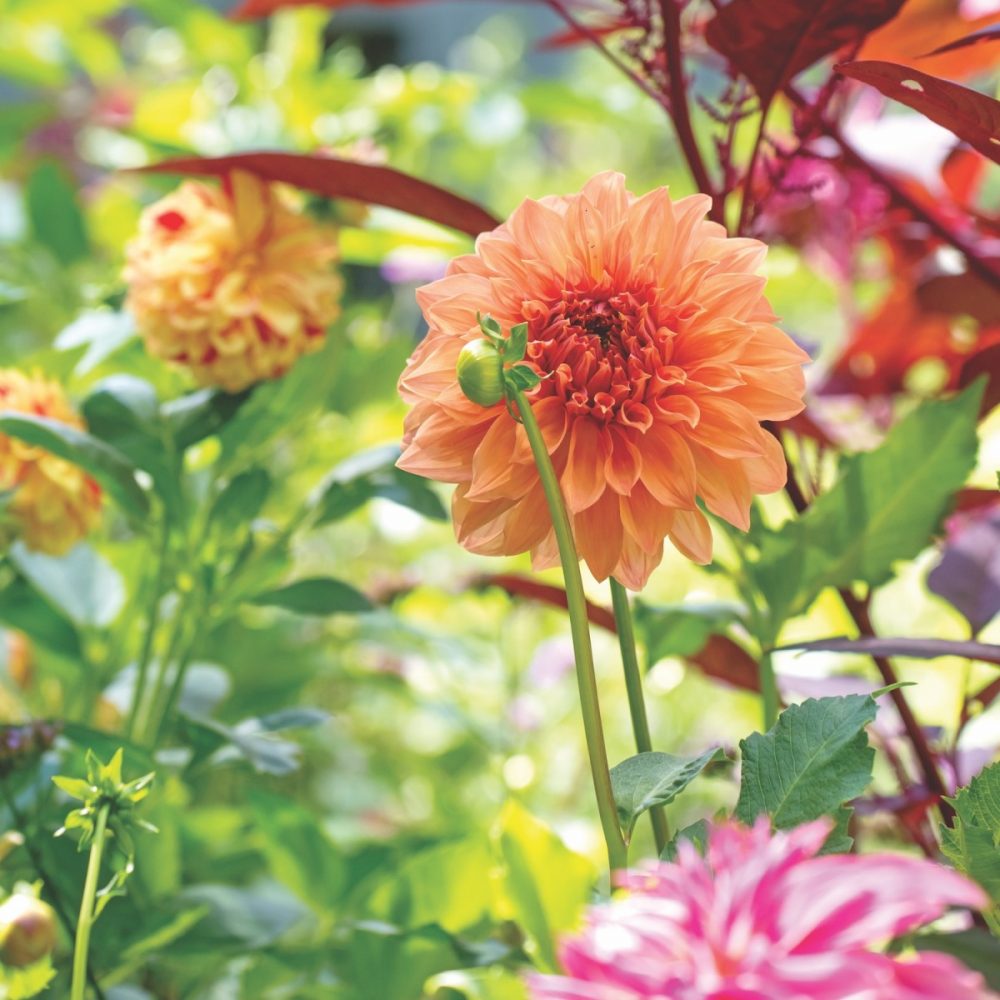 The bronze-orange ‘Clyde’s Choice’ dahlia is a showstopper, standing out among other blossoms and self-sown amaranths.

Meanwhile, raising a family in a country home required putting a new spin on her career. Originally, she studied art history with an eye toward spending her future in the caverns of museums, but children made the commute toward city-centric museums challenging. Her husband suggested that she explore something she always wanted to do. Pottery topped that list, so she took a pottery-throwing course at the Silvermine Arts Center in nearby New Canaan. Thus the collaboration between craft and cut flowers began. She became fully conversant with the potter’s wheel and turned to dahlias for artistic inspiration. 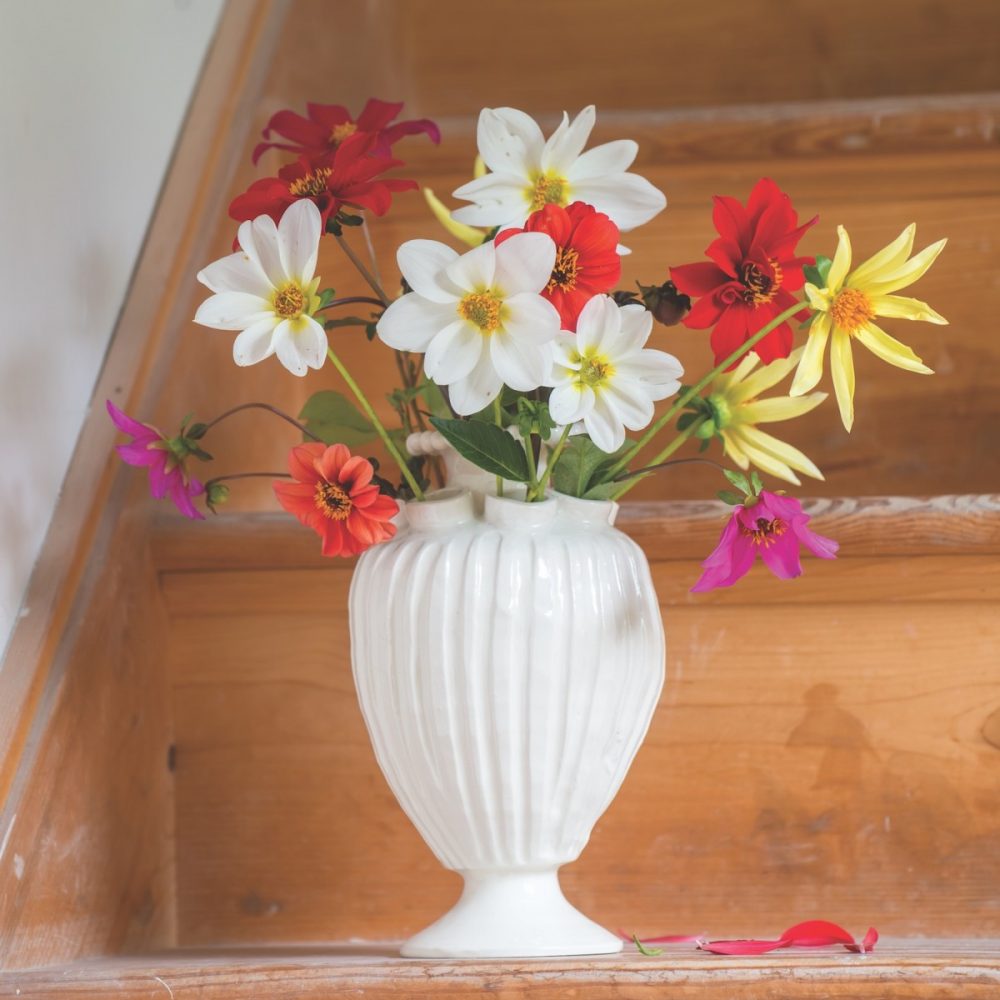 However, Palmer does not try to depict the dahlia literally. Instead, she creates containers that complement them, always working to find ways of framing each bloom to highlight its splendor. She forms vases with idiosyncratic curves, and, “Every time I see a new flower unfold, I have to make a different shape,” she says. “The stems have different lengths, and I throw vases with different openings based on the flowers. I also make bowls and design vessels for ikebana,” she adds. To create luminosity, Palmer favors oxblood and celadon glazes as well as other Chinese glazes. 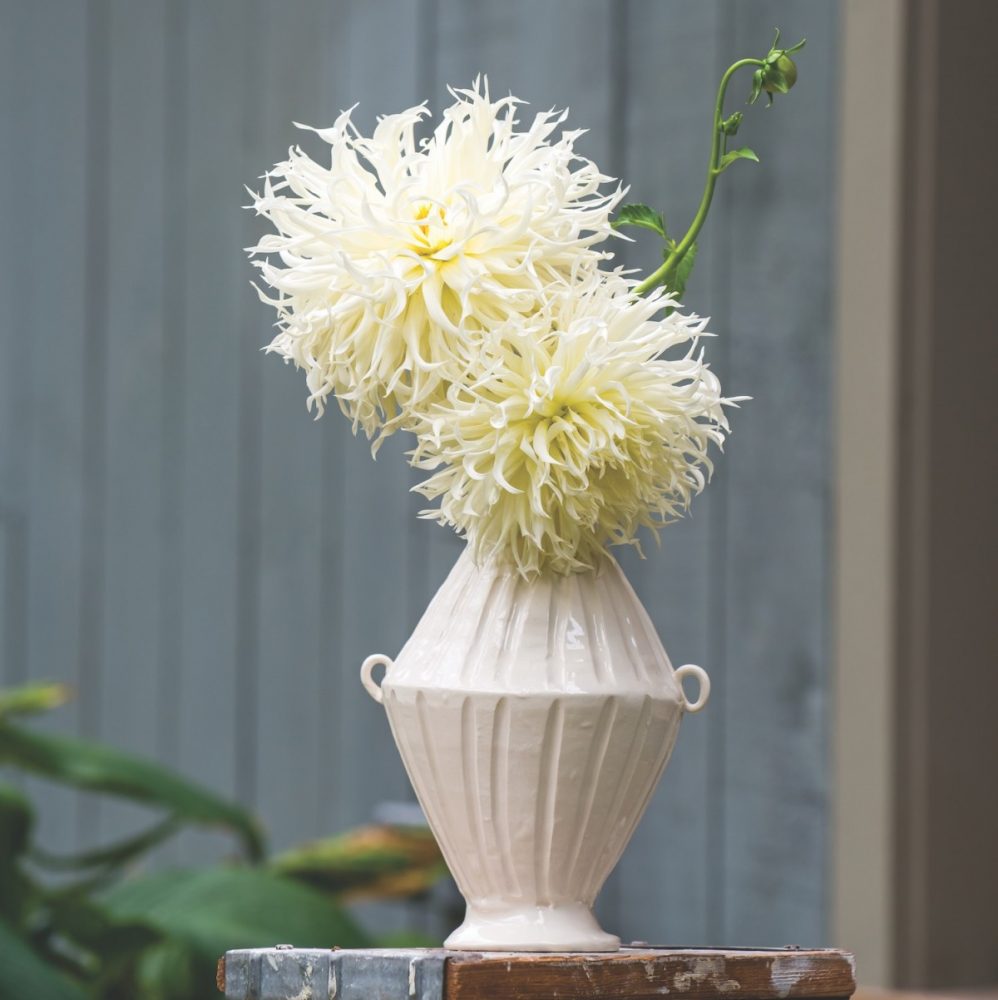 Ask Palmer to sum up her gardening style, and she doesn’t beat around the bush: “I really like dahlias in the context of chaos,” she says. But this doesn’t mean she lets things get out of hand—indeed, just the opposite. Her decision to plant the flowers in rows was a smart choice given their voluminous foliage. Carefully arranged by size, the shorter plants bearing smaller flowers front the beds, while the more robust varieties stand in the rear. Beyond their size classifcations, the arrangement is random. Palmer doesn’t have to worry about colors clashing, because she gravitates toward a certain color palette of “whites, pinks, oranges, reds, and dark reds. It all balances no matter where I place the individual tubers,” explains the artist. 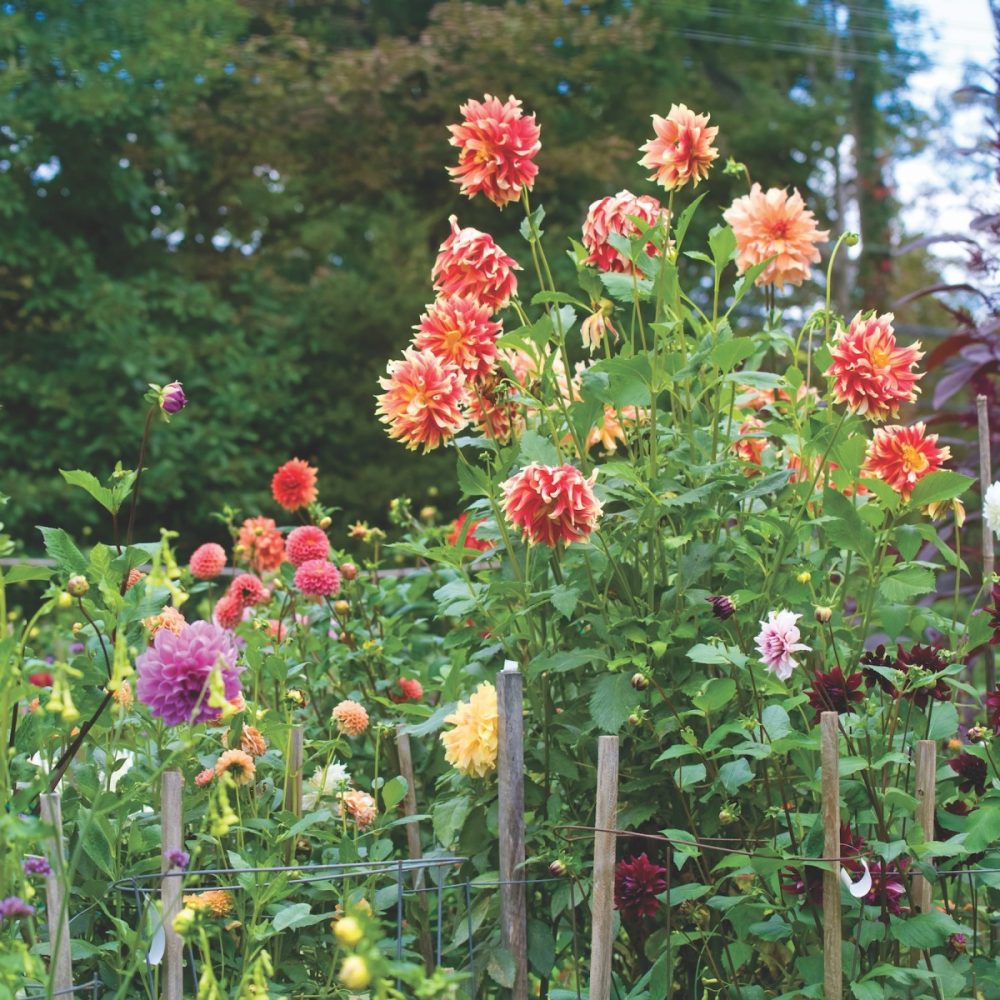 For onlookers who want more than just a peek at the garden from the street, Palmer welcomes visitors through the gates for Open Days, a program of the Garden Conservancy, the New York–based nonprofit whose mission is to share and sustain outstanding American gardens. After all, her garden is really just one big celebration in her front yard. Visitors cannot help but catch her enthusiasm for dahlias. Will Palmer ever tire of shaping ceramics that pay homage to her favorite flower? “Never,” she replies.

See more of Palmer’s work and shop on her site, FrancesPalmerPottery.com. 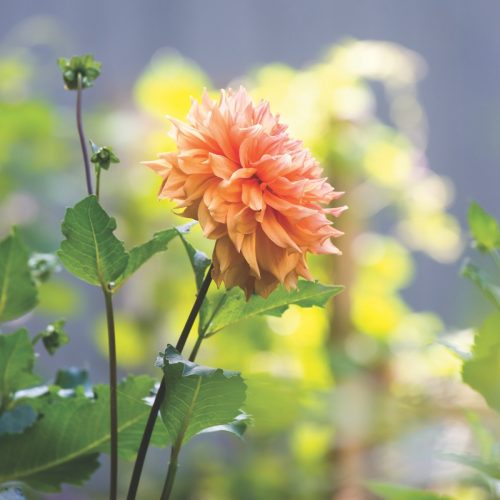