For the Love of Narcissus

These blooms are a favorite harbinger of spring and, with their cheerful faces, become total show-offs 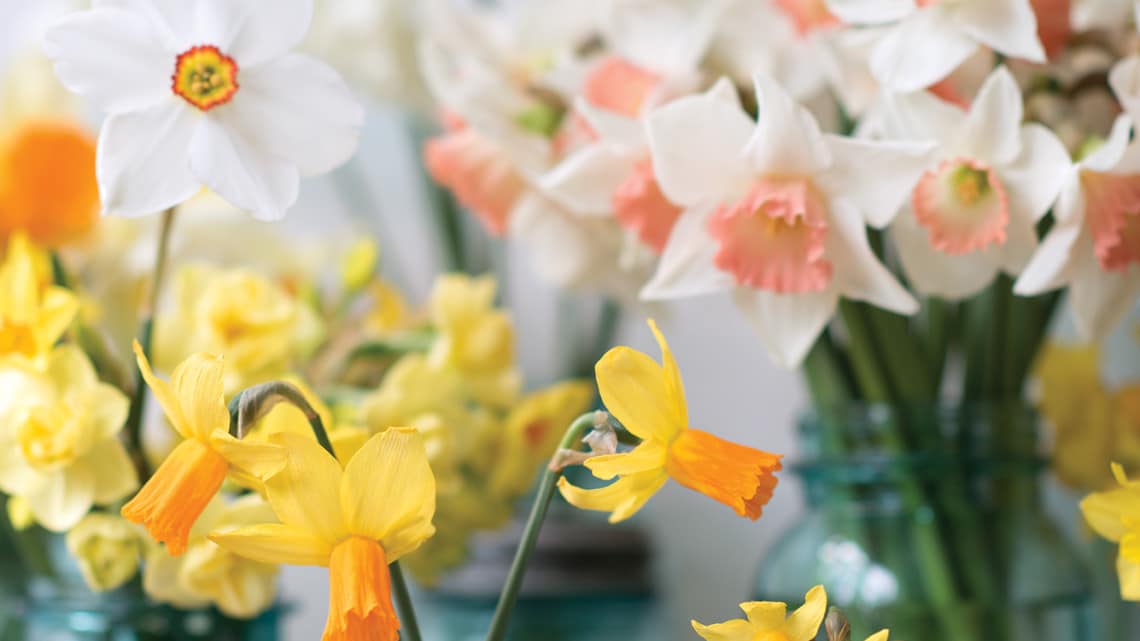 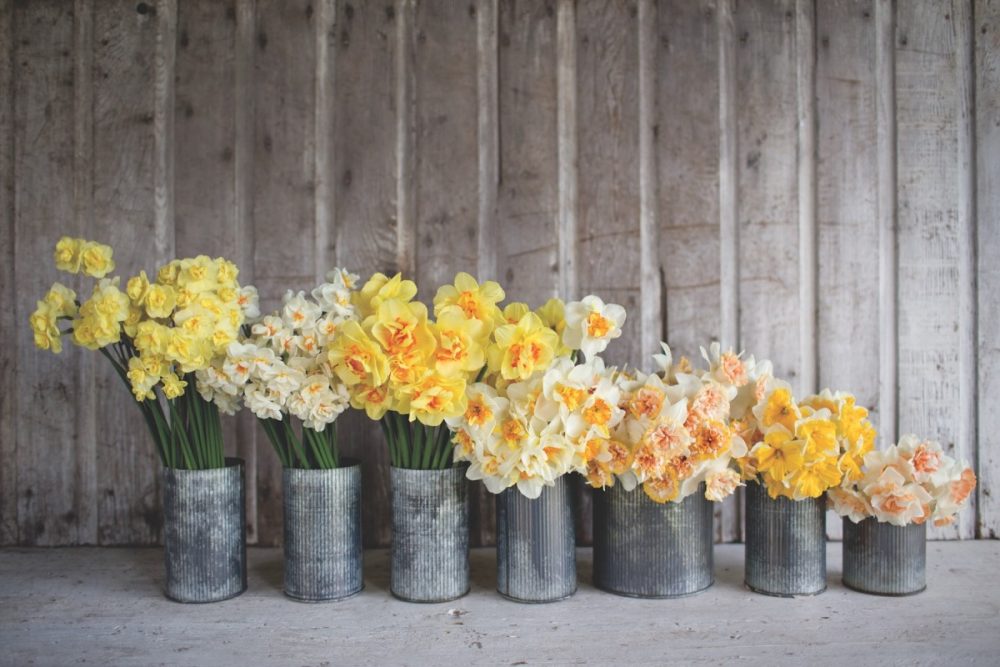 The sight of narcissus—those plucky, early-blooming trumpeters—signals that winter is surely on its way out the door. As March winds blow, the flowers act as a visual chorus, collectively defying cold mists and clouds that threaten to douse their display. Hardy and resilient, they are especially dramatic when drift-planted, transforming dreary, dormant woodlands and dun-colored fields into undulating carpets of blooms. 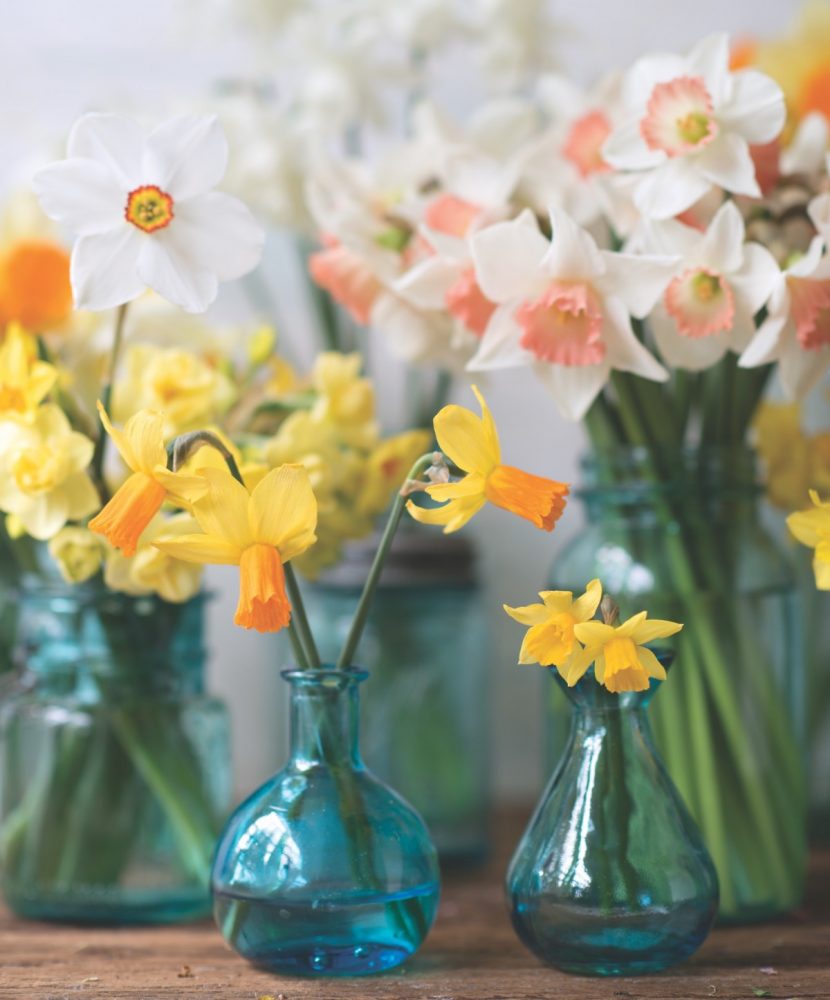 Although yellow is perhaps the most commonly associated color with narcissus, the palette ranges from brilliant yellow to creamy white and soft apricot, and many sport bands of orange, bright red, and pink. Photo by Georgianna Lane

Although the precise origin of the flower’s name is unknown, it is undoubtedly linked to several Greco-Roman myths. One tells that the beautiful youth Narcissus was so mesmerized by his reflection in a pool, he drowned in it and was turned into a flower. In another, Homer describes how a brilliant bed of narcissus distracted the goddess Persephone, and she was easily seized into the underworld by the god Hades. In these and other tales, the conclusion emphasizes redemption, as these mortals and gods become sunny narcissus, bound to elicit joy for eternity. 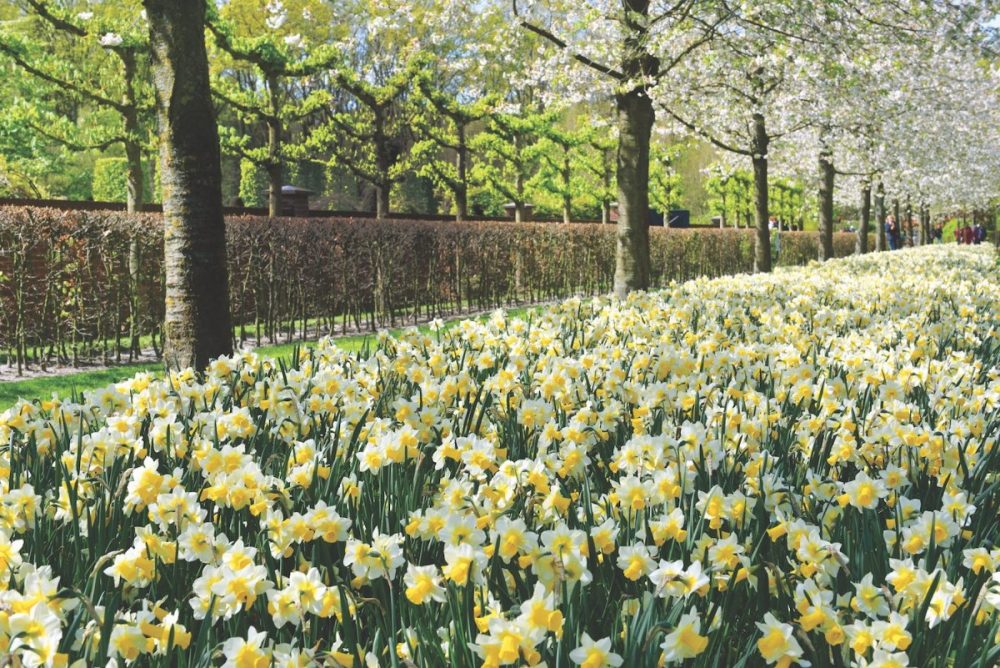 Daffodils have been known since antiquity. Appearing as lowly wildflowers in the Mediterranean basin, they gradually spread to Europe’s alpine and coastal regions. People in Britain and the Netherlands began cultivating them as early as the 16th century. Folklore and poems, sonnets and plays throughout history from Shelley to Shakespeare, chronicle the world’s love affair with narcissus. The most famous ode is William Wordsworth’s endearing poem “Daffodils” that celebrates a visit to the English Lake District with his sister Dorothy. In it, his vivid description radiates elation that spring has finally arrived. The verse, “When all at once I saw a crowd; A host of golden daffodils; Beside the lake, beneath the trees; Fluttering and dancing in the breeze,” conveys his utter delight. 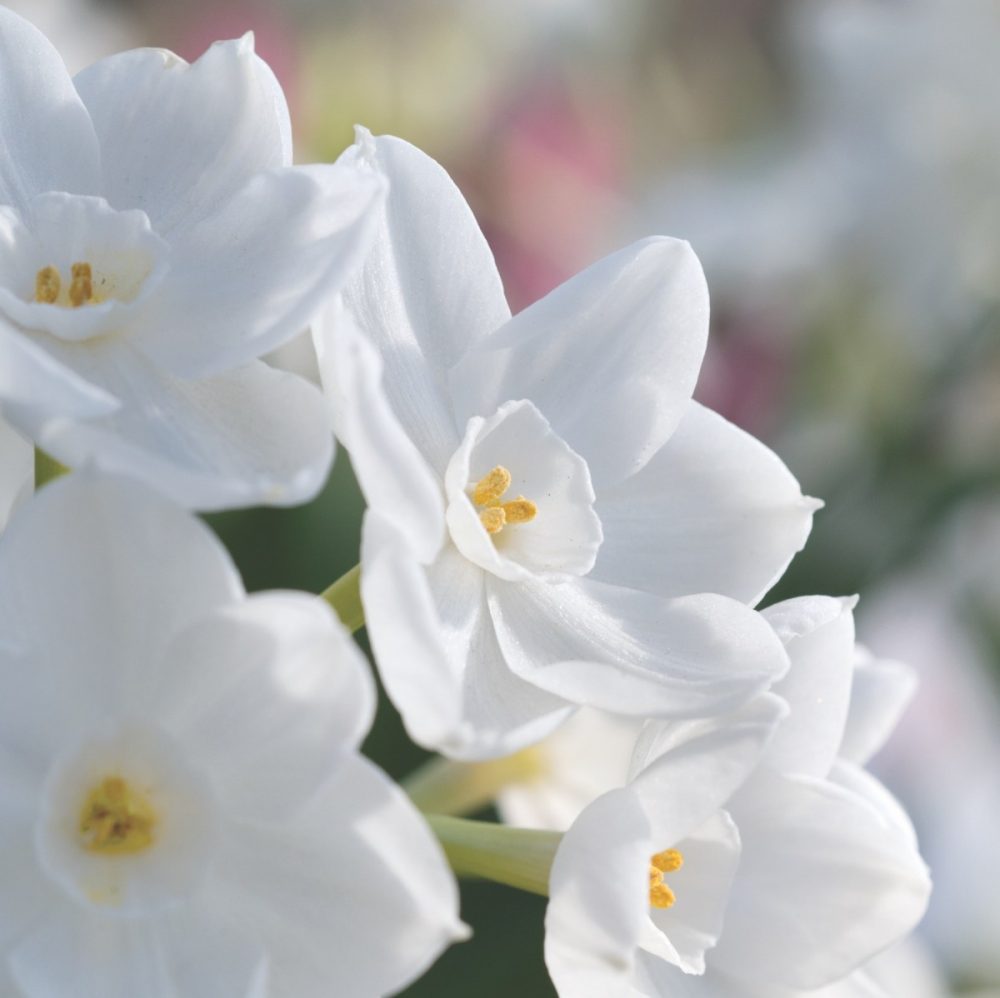 ‘Ziva’ paperwhites raise their faces to the sun. Photo by Georgianna Lane

Today, 50 species of narcissus including 28,000 varieties of daffodils, jonquils, and paperwhites are named and registered with the Royal Horticultural Society in London. But given that zealous hybridizers and breeders are constantly at work to create new ones, there are always more to come. Within this dizzying number of choices, fragrant yellow or white paperwhites bloom early and feature small flowers atop tall dark-green stems. When mingled with pinecones and greens, they dress up dining tables or mantels for Christmas. Considered a good-luck symbol of Chinese New Year celebrations in late January or early February, they sprout in bowls or trays from bulbs on pebbles in water.

Jonquils differ in that they produce clusters of three to 10 small, richly fragrant blooms on each stem. These showy, multicolored plants bloom as early as autumn depending on climate, and return reliably year after year. 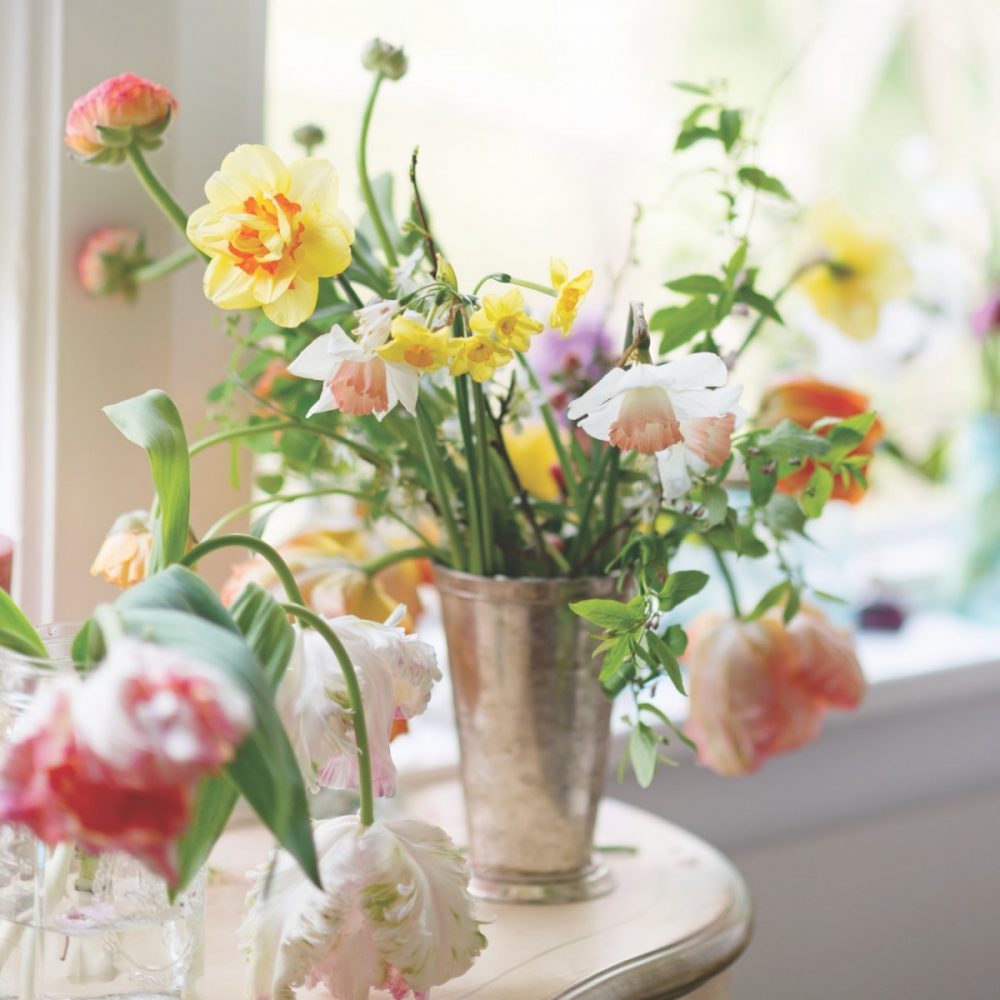 Whatever the variety, narcissus lend themselves to effortless, just-picked-from-the-garden floral arrangements. Photo by Georgianna Lane

No matter the variety, all have become favorites of gardeners, arrangers, and decorators who depend on their perky blooms to enliven indoor and outdoor settings. The flower’s arrival spawns festivals and garden tours around the world. Whether dancing on the lawns of Balmoral Castle in Scotland, or brightening the grimness of the Tower of London, swirling into rivers of gold in Holland’s famed Keukenhof garden, or nodding against gravestones in the Old City Cemetery in Lynchburg, Virginia, narcissus evoke emotions of renewal, hope, and triumph.

Just as that Greek lad Narcissus was enchanted with his own image, with the botanical narcissus, it’s those captivating faces—distinguished by a central corona, trumpet, or cone often edged with delicate ruffles or scallops—that have attracted the attention of everyone from the artists who painted the Pompeiian frescoes to Van Gogh, from Egyptian pharaohs to American presidents. During colonial times, the lightweight, easily portable bulbs arrived with early settlers, who might have rolled them into clothing, with dreams of brightening days in the New World. Gabriele Rausse, Monticello’s director of gardens and grounds, imagines Thomas Jefferson so loved his daffodils that “he used them as a virtual alarm clock that said, ‘Spring is here!’” 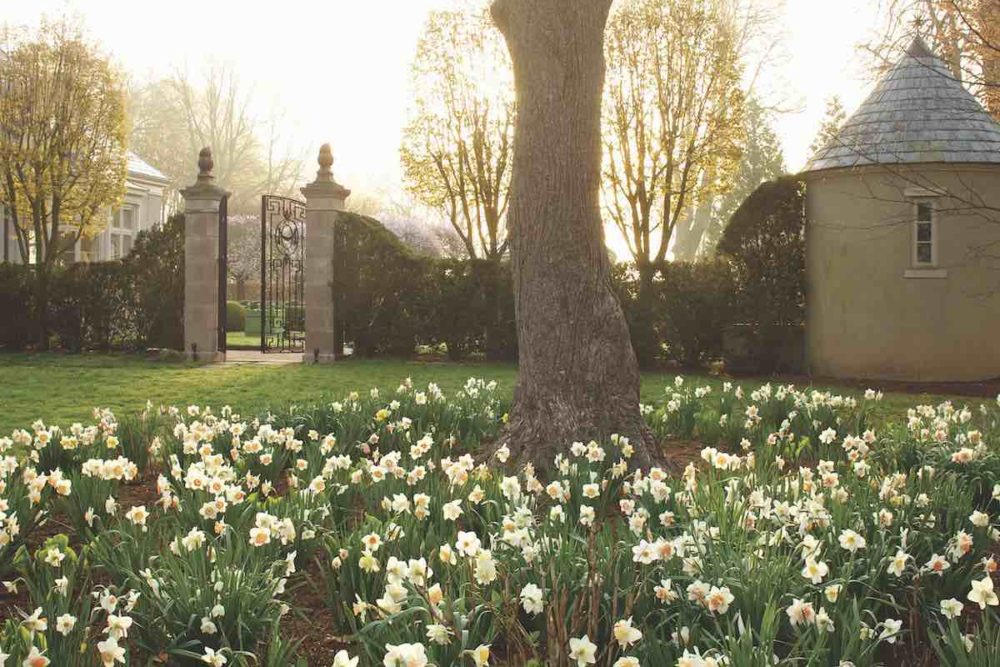 Thus today we all await the arrival of daffodils and their cheerful optimism that signifies the beginning of the season of new growth. And we dream of wandering, like Wordsworth, through a daffodil-strewn field, where the vision of these blooms caused the poet to proclaim: “And then my heart with pleasure fills; And dances with the daffodils.”