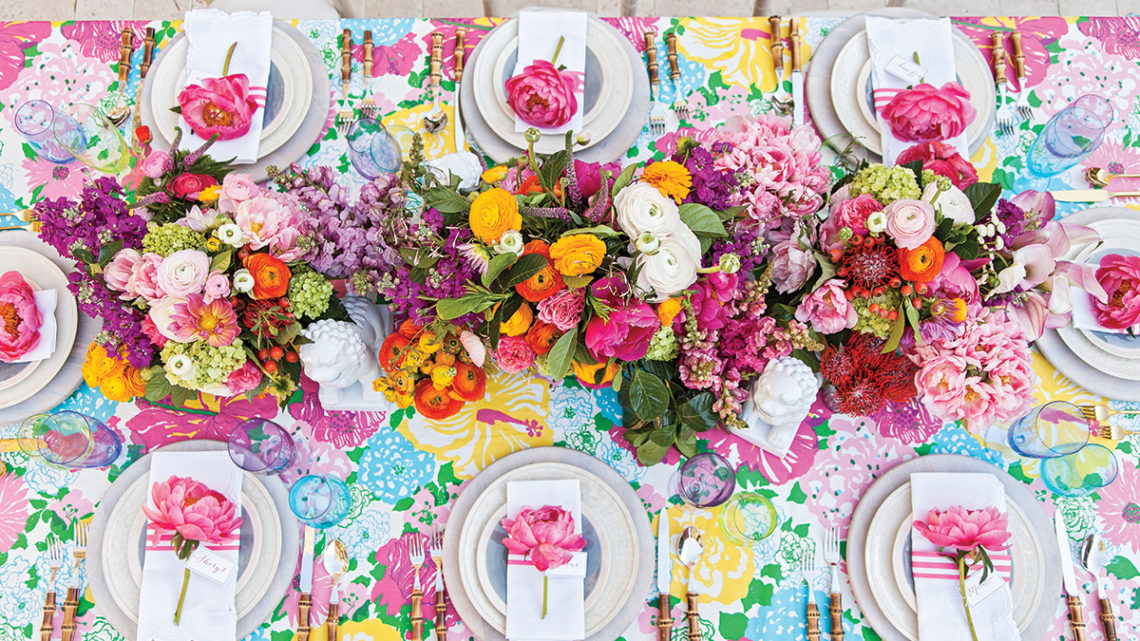 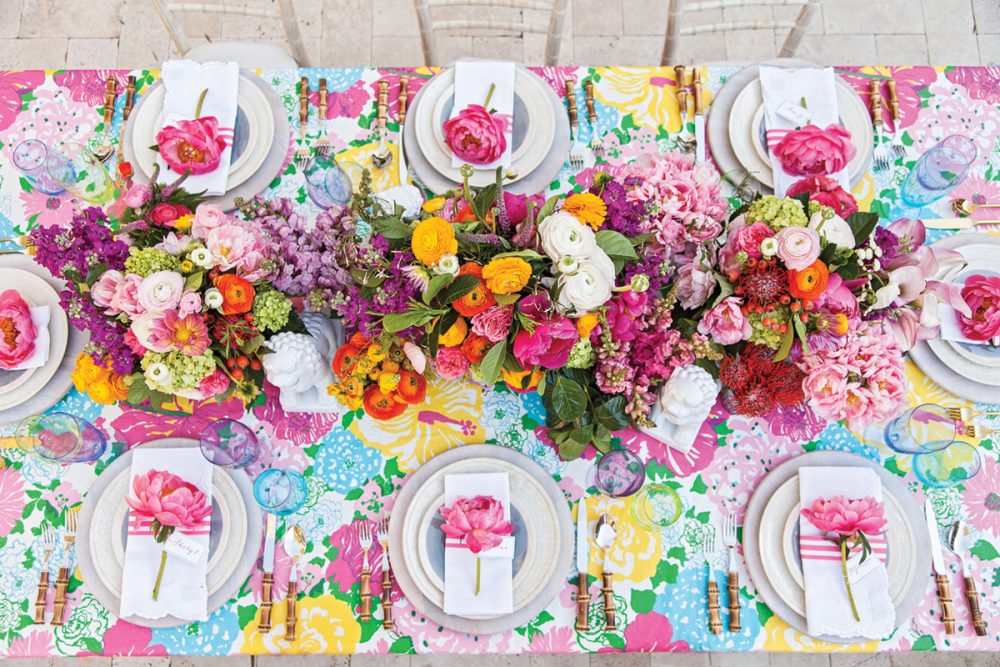 From Flower’s July/August 2016 issue: “I believe that Thomas Wolfe didn’t get it all quite right. You can go home again, and do it in style,” says Elaine Griffin, as she fans out a tablecloth over a weathered table and begins to smooth out the wrinkles. Never one to do things strictly by the book, the designer—who spent a number of years living in Paris and New York building a successful career creating sophisticated rooms and sharing decorating ideas in magazines and on television—has recently moved back to Brunswick, Georgia, the town where she was born and bred. Today she’s on nearby Sea Island, preparing for a party in the courtyard garden of the Georgian Room restaurant at The Cloister resort.

“The Cloister was where we always marked special occasions when I was growing up,” remembers Griffin. “It was magical then, and it still is—it just oozes Southern chic.” 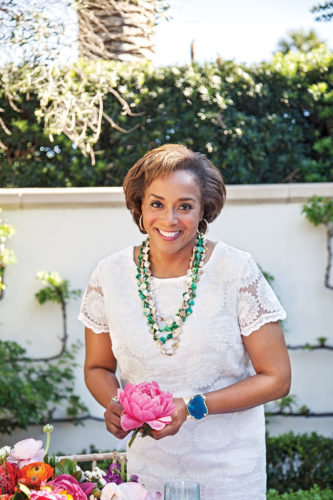 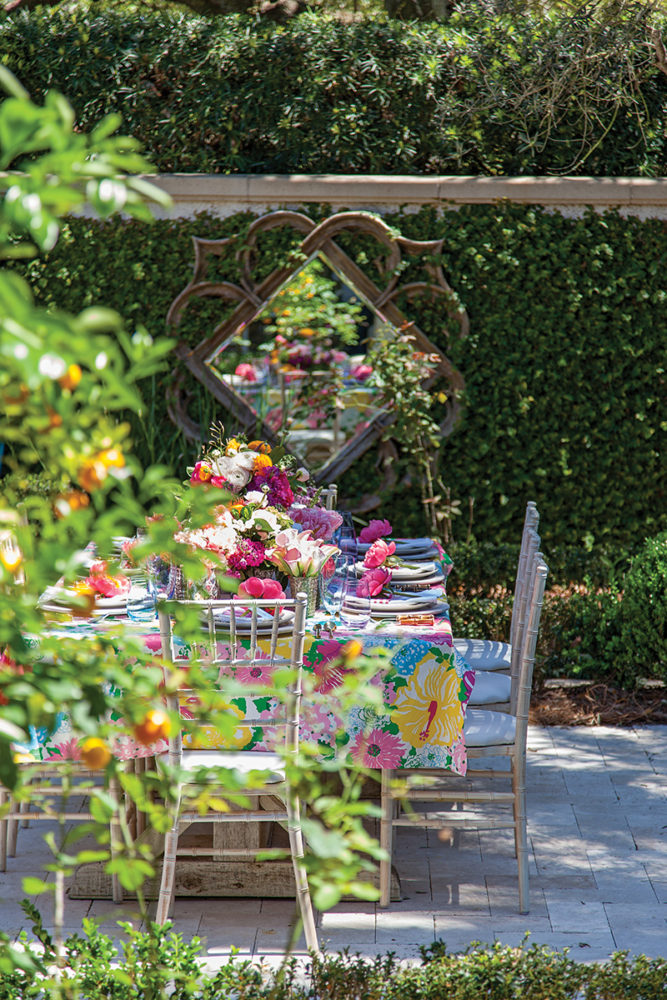 She chose a Lilly Pulitzer fabric to cover the tables in The Cloister’s Georgian Room garden.

When Griffin hatched a plan to host a stylish luncheon, she wanted to share the place that felt, well, like coming home. On the guest list is a mix of girlfriends who are visiting from Manhattan and a handful of hometown women Griffin has known since school days.

The iconic resort and its staff are known for an unerring eye for detail and a gracious approach to caring for guests’ every need, sensibilities that Griffin shares whether she’s decorating a house or a table. The party may be taking place outdoors, but this is no casual affair, and the designer has brought in a treasure trove of tableware from her own china cabinet and linen closet. “I want to honor what’s distinctive and beautiful about the venue, and also create a moment that says ‘me,’” she says. For this hostess that means using lavish flowers in the bright, cheery colors she favors and combining them with a bold, tropical pattern that is as outgoing as her larger-than-life personality. 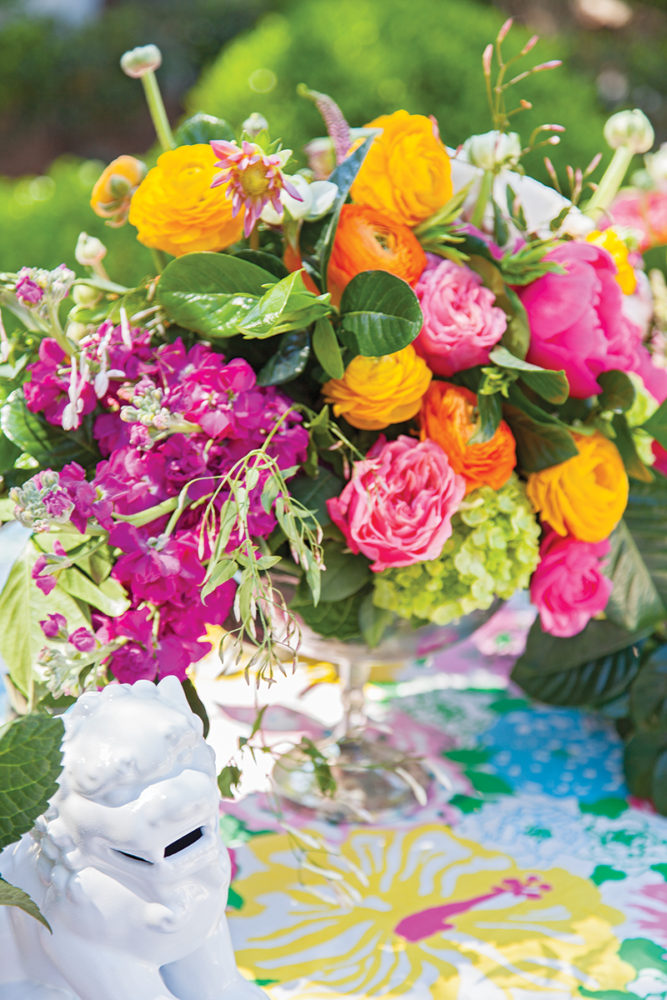 Griffin likes to intersperse decorative objects among the flowers, and here she used ceramic foo dogs from Home Goods that she spray-painted white. 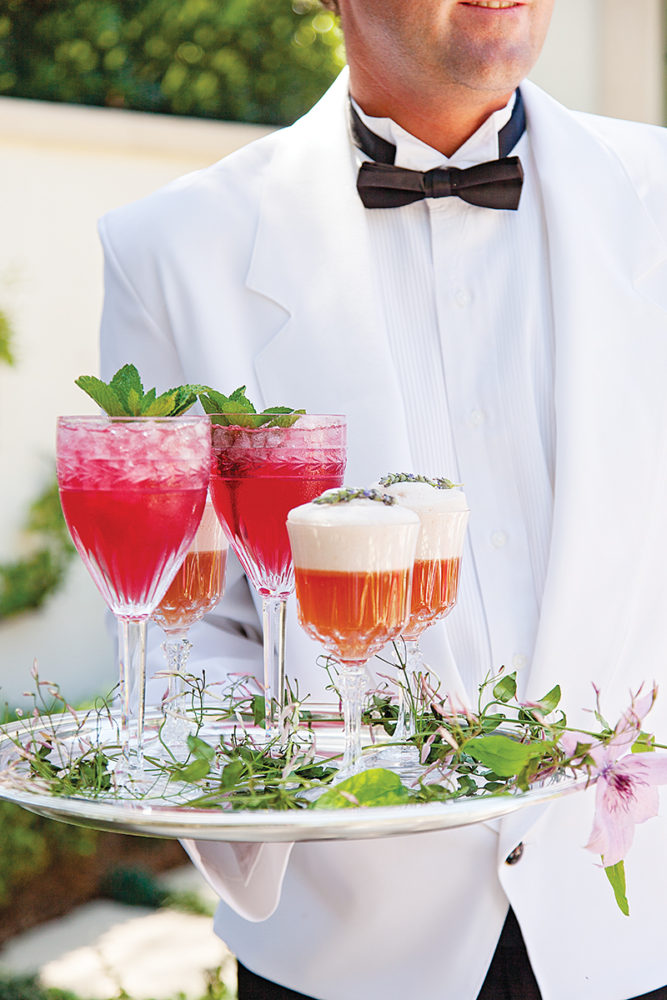 Although her friends are expected shortly, while attending to last-minute touches Griffin notices a napkin that looks a tad wilted, and insists on giving it a quick once-over with an iron. “Starched linens are just one way that Southerners say ‘I love you,’” she says, with a laugh.

“Entertaining is about sharing a bit of ourselves with people we care about, and I’d love to say that I don’t sweat the small stuff, but I’d be lying. For me, God is always in the details.” 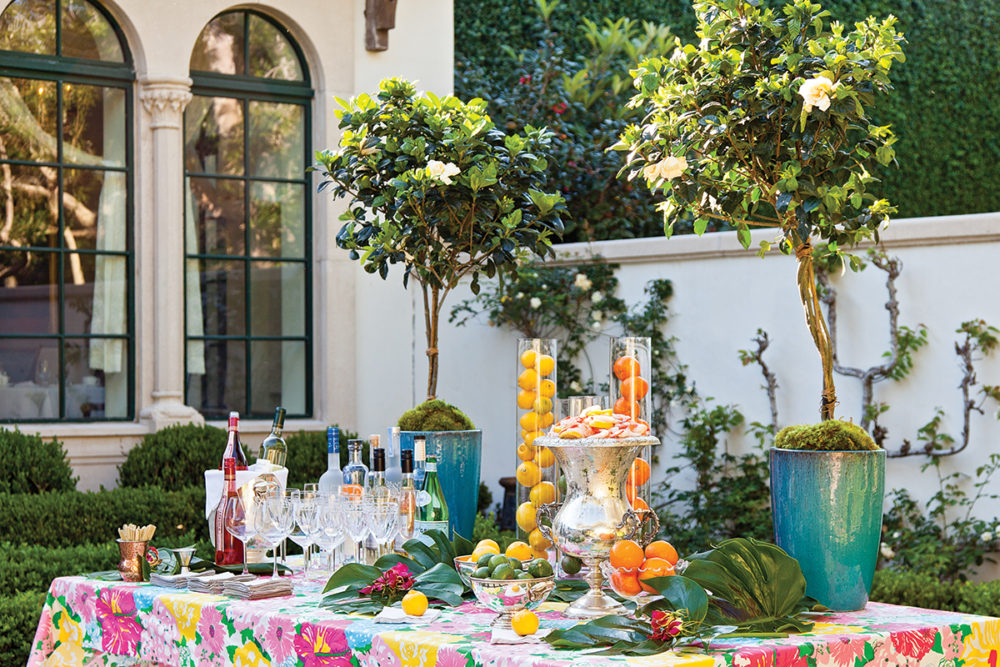 A second rectangular table was used for the bar and decorated with gardenia topiaries, tropical leaves, and fruit. “I like to station one main appetizer such as peeled shrimp with the drinks,” says Griffin.

When hosting a party outdoors, I consider the environment and pick colors I think are flattering. As a lifelong Southern preppy, Lilly Pulitzer is my summer wardrobe staple, so I’ve chosen a Lilly fabric for the tablecloth and opted to wear white instead of my usual patterned shift, because who wants to clash with her table linens?

I never stick to one big centerpiece in the middle. I usually believe in “many, mini, and low” running the length of the table, but today it is “many and lush,” as nothing less than a tabletop garden feels right in this setting. I’ve asked Bryce Brock and Kelly Revels of The Vine to realize the vision—they’re floral geniuses! 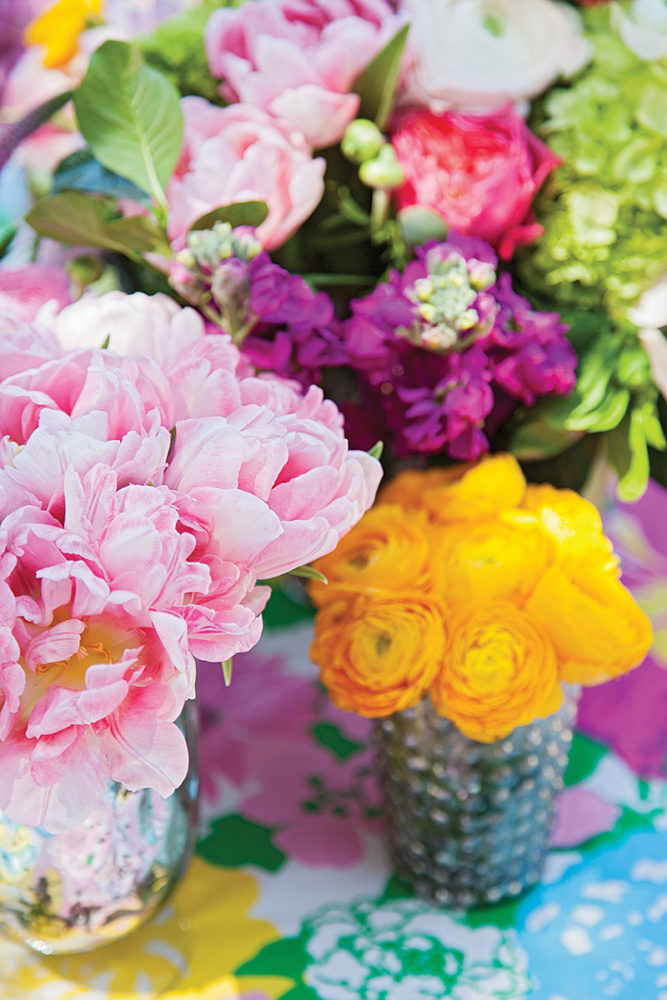 Mini groupings of flowers dotted the table along with the larger arrangements. 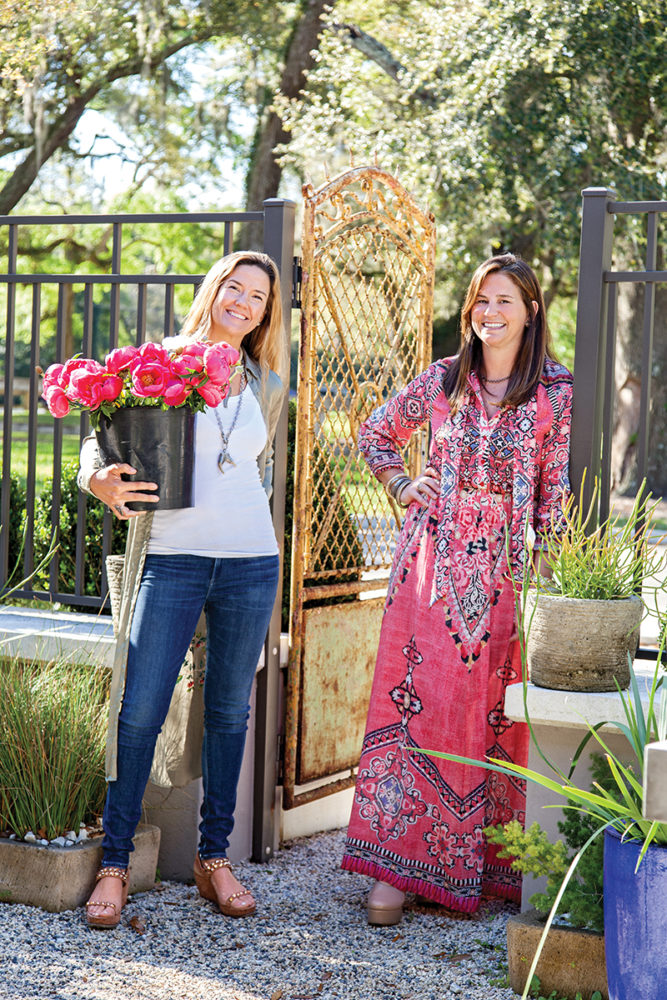 Of course I choose the table that fits best in the space, but I prefer small, rectangular tables when possible. It’s a myth that round tables are easiest  for conversation, because once you go beyond 48 inches, you’re shouting at those across from you.

I’m not sure why, but that ninth person usually means I don’t get any further than cocktail chitchat. I want to find out what’s really going on with my girlfriends and for guests to get to know one another. 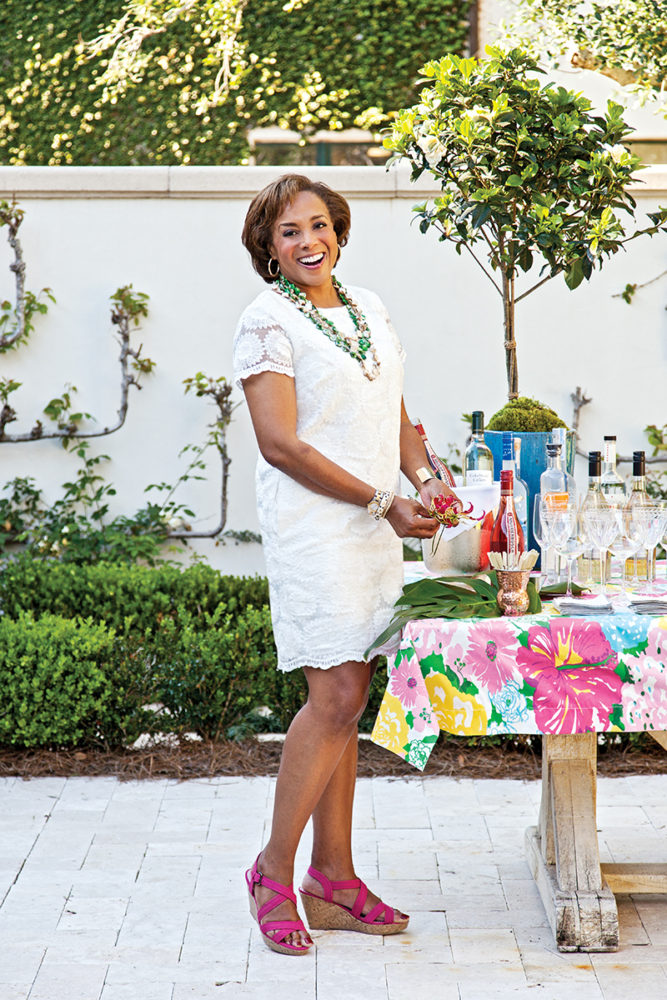 Griffin put the final touches on the table while awaiting guests. 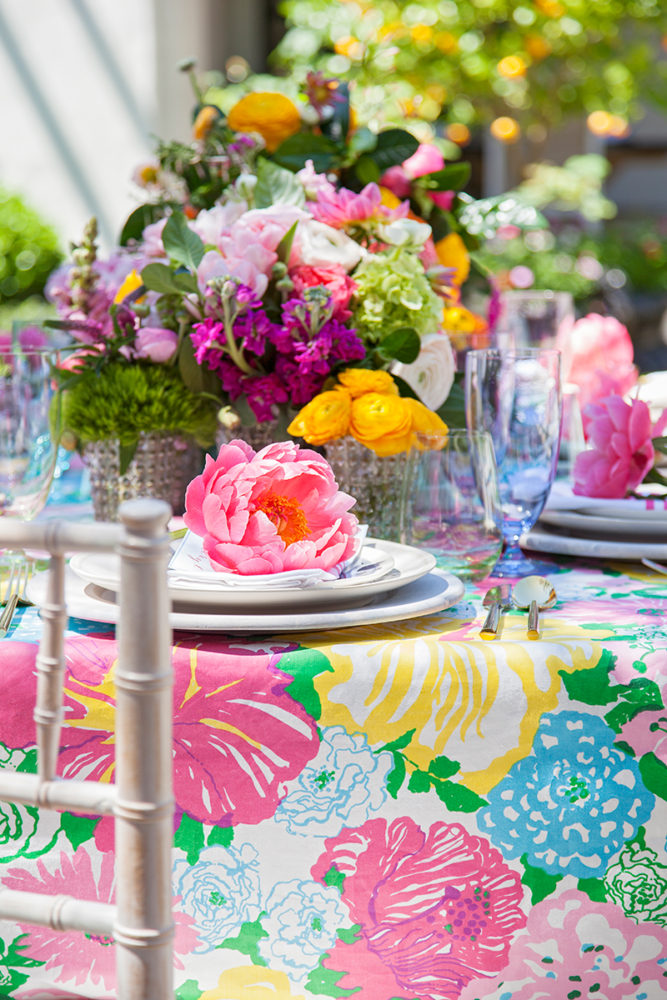 Vibrant peonies atop the plates also served as place cards.

I put care into who sits where, and consider who has shared interests and how people will mesh. I love place cards and they’re a great way to add personality to the table. There are no shrinking violets in this crowd, so I’ve tied the place cards to big, showy peonies.

Even adults love party favors. They’re a fun way to cap off an event. Today I’m giving friends a little reminder of home: cocktail napkins by Dot and Army  that celebrate Georgia’s nickname, the Peach State. 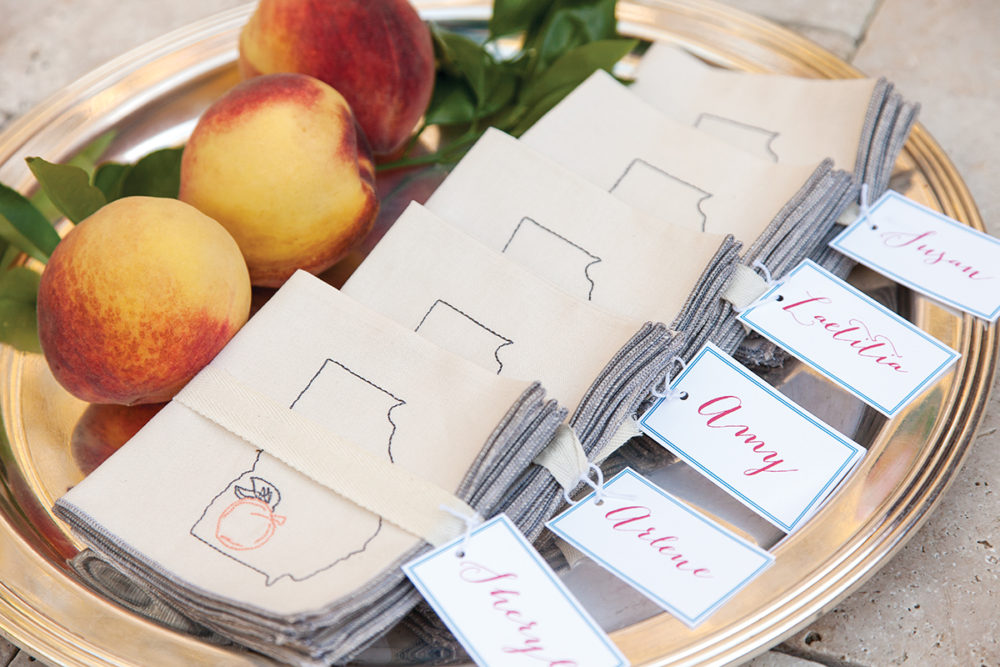 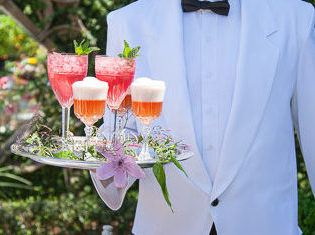 Cocktail Recipes with a floral twist

Learn how to make your own Lavender Cloud and R&R cocktails! Full recipes found here.

Southern Hospitality on the North Shore

Aglow in the Allée