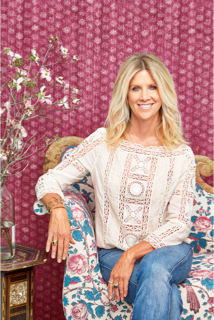 Botanical prints and embroideries have captivated interior designer Schuyler Samperton’s imagination since she was a child, but saccharine florals never appealed to her. Early on she saw her mother, no shrinking violet, decorate with vibrantly colored vintage susanis and fearlessly don jewel-toned Indian-print head scarves with designer dresses. When she was barely into her teens, Schuyler enjoyed poking around rambling old houses and became enamored with time-worn English chintz; Soon she started collecting remnants of the patterned fabric along with Moroccan tent borders, Japanese silks, and her own tendril-covered susanis. All of these influences inform her debut textile collection which is anchored by exuberant floral prints that are unabashedly feminine without being twee.

Case in point: Caledonia, a printed linen with lush rose-laden branches, birds, and butterflies. (Schuyler chose the name Caledonia, a Latin term for Scotland, because the fabric looks like something one might find in a crumbling British country manor house.) The motifs and composition are rather classic—in fact, the design was adapted from a centuries-old Indian document—but the colorways are unconventional. In one option, Schuyler juxtaposes an intense imperial blue with rich plum and coral-pink, and in another, she combines a nuanced teal with deep-peony-pink and brown on cream.

“The antique design that inspired Caledonia was funkier and less stuffy than other old-school patterns with a certain naïveté that I liked,” says Schuyler, explaining that she wanted this unceremonious quality to pervade her entire line. Additional prints in the collection include, Overlea, a leafy pattern taken from one of her Mom’s scarves; Celandine, with a large, lively poppy motif; and Cordoba, a paisley with undulating vines that reminds Schuyler of a garden.

“A lot of men are liking the line, which is interesting to me,” she says, “The way these florals are drawn, their scale and their saturated coloration, I hope eliminates any kind of treacly factor.”