Floral designer Sybil Sylvester helps a friend create a welcoming and joyful atmosphere inside and outside her house in preparation for a celebrated holiday home tour in Birmingham, Alabama 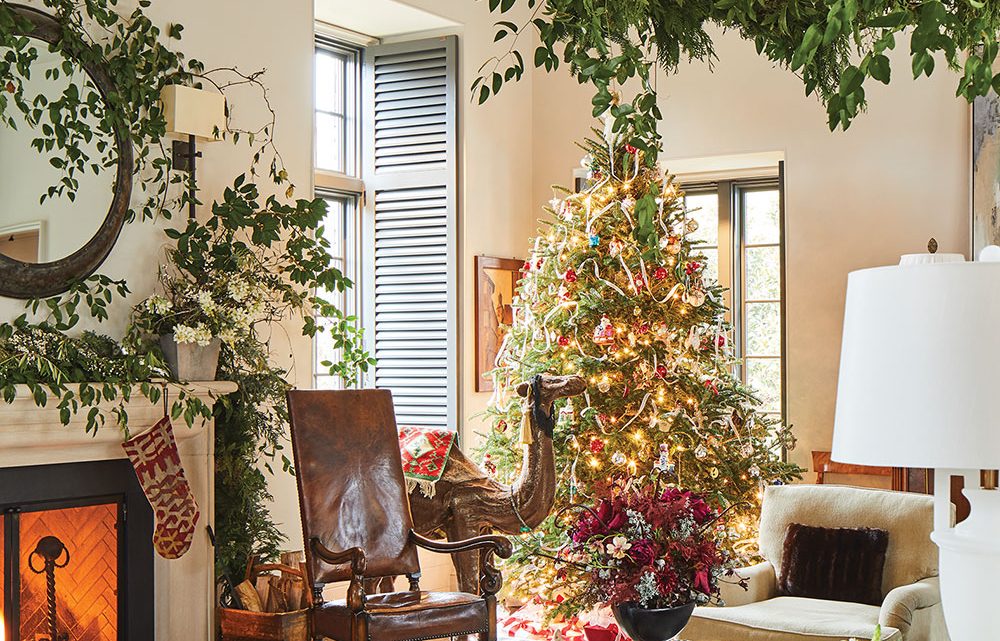 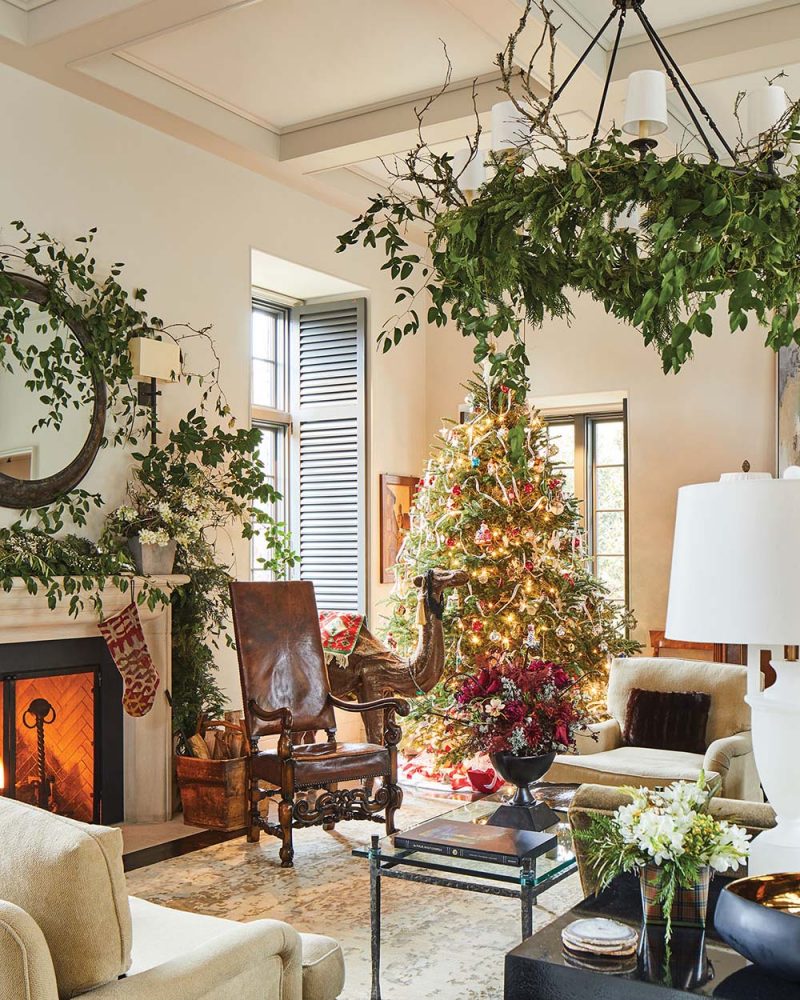 In the living room, Sylvester dressed the mantel and chandelier with mixed garland enhanced with lichen, olive, and acacia branches; smilax vine; and others.

We all want our homes to shine during the holidays as we anticipate visits from family and friends and perhaps some larger-than-usual gatherings. But what if you were expecting throngs of visitors tramping through your house over the course of a weekend? That’s exactly what faces the intrepid and generous souls who open their houses for charitable holiday home tours.

Alice and Bob Schleusner know a thing or two about this experience, as they have offered their homes to the Independent Presbyterian Church’s celebrated fundraiser three times (this year is its 70th anniversary). “It’s such a great cause,” says Alice. “It’s hard to say no!” 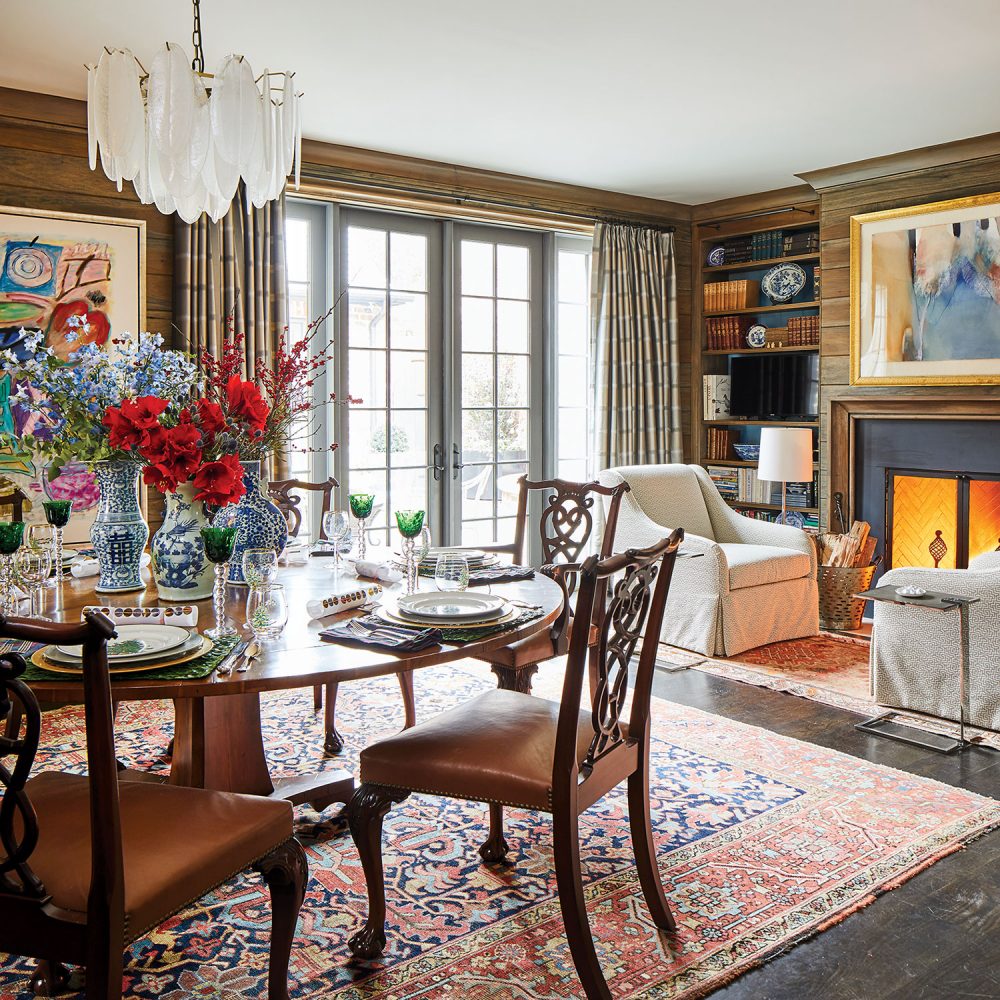 Alice engaged friend and Birmingham floral talent Sybil Sylvester of Wildflower Designs to ease the burden and bring the beauty. “We wanted the overarching look to be as natural and seasonal as it could be, bringing the outdoors in,” says Sylvester.

“Sybil knows I don’t do froufrou, and I think the designs are beautiful and not over-the-top,” says Alice. The pair also wanted the decor to be in harmony with the interiors designed by Marjorie Johnston, which feature glorious rugs throughout. (Alice was a purveyor of fine rugs for 40 years before selling her business to protégé Paige Albright, who helped select some pieces for this home). 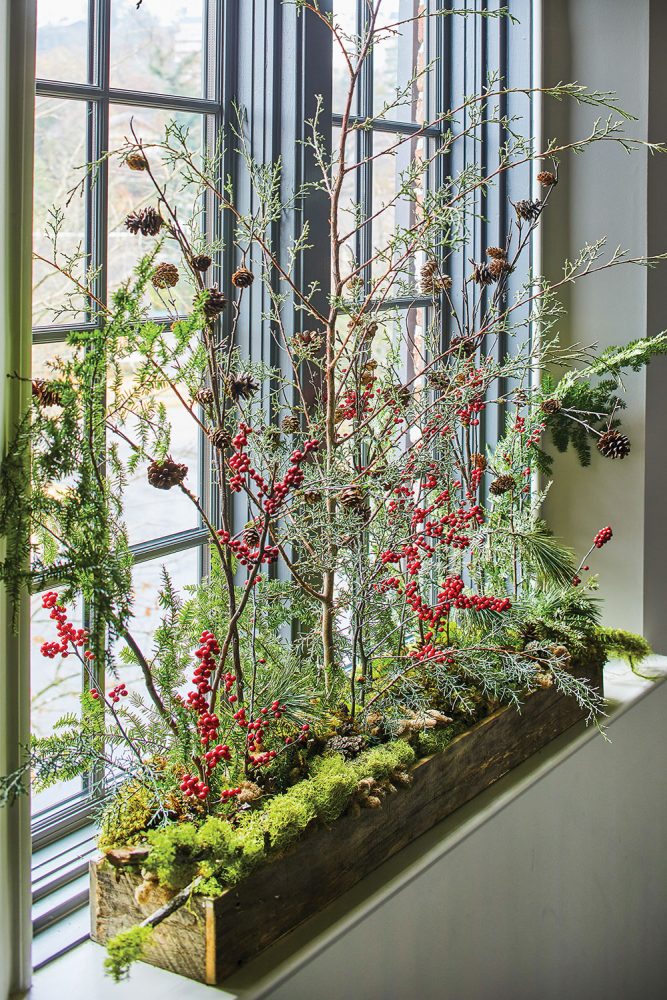 “I wanted the window arrangement to look like it was scooped up in the forest and planted right in the box,” says Sylvester. 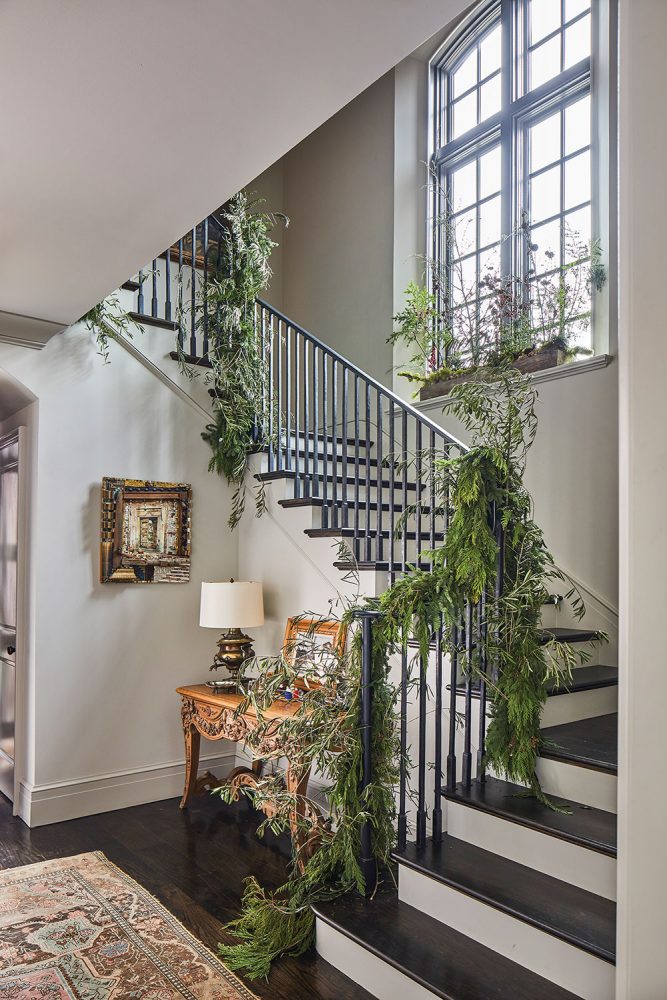 The staircase was wrapped in mixed garland with acacia and olive branches added in.

To achieve her goal of cohesion downstairs, the designer threaded similar materials and textures throughout. Standard mixed garlands became custom, woven with branches, berries, smilax vines, and eucalyptus pods. “There are important considerations when decorating for a house tour, primarily scale and placement,” says Sylvester.

“People are not coming for a dinner party and sitting down and lingering; they are moving in and out at a fairly rapid pace, so things need to be visible and dramatic. Smaller gestures would be lost.” — Sybil Sylvester

With that in mind, she festooned the living room chandelier and added branches and vines to the mantel garland to create height and movement. “On the coffee table, I placed a dramatic and vivid arrangement that was larger than standard for that space, so it would stand out,” says the designer. 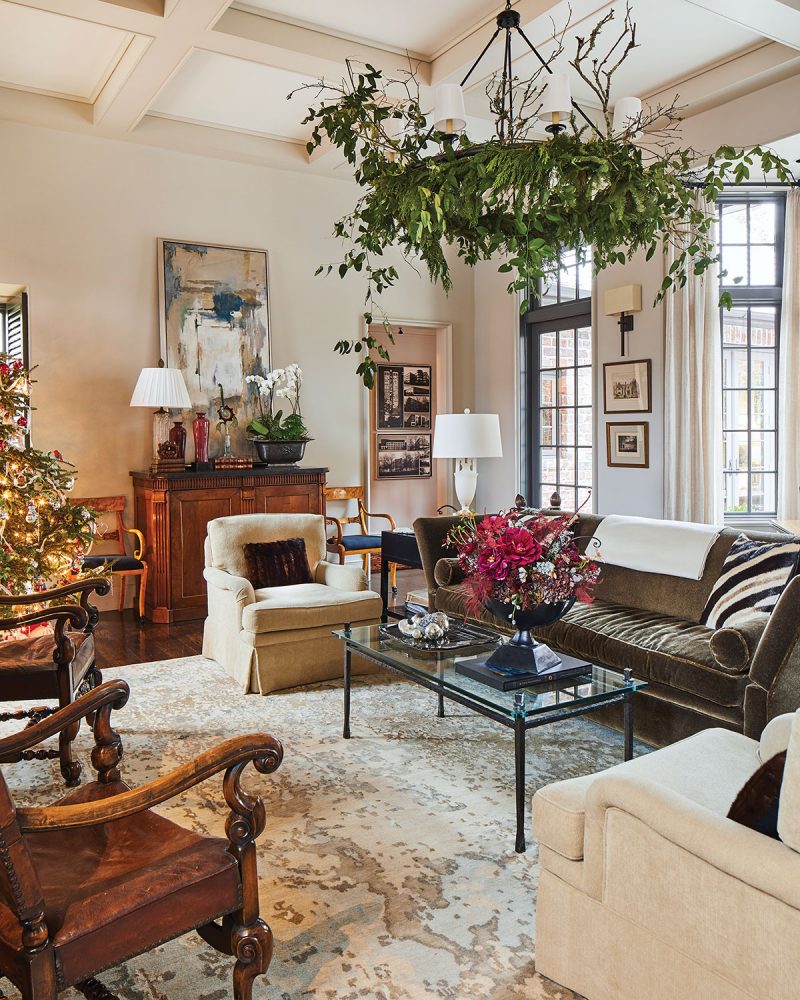 On the staircase, practicality was in play: Instead of wrapping the entire railing with greenery, she created two sections, making it easier for a crowd to traverse the stairs. For the bedrooms, Sylvester departed a bit, selecting colors and materials inspired by the setting. In the master, that meant more-delicate pieces and softer colors. For a guest bedroom, coppery hues dictated the choice of pine cones cleverly used as garland on the headboard. 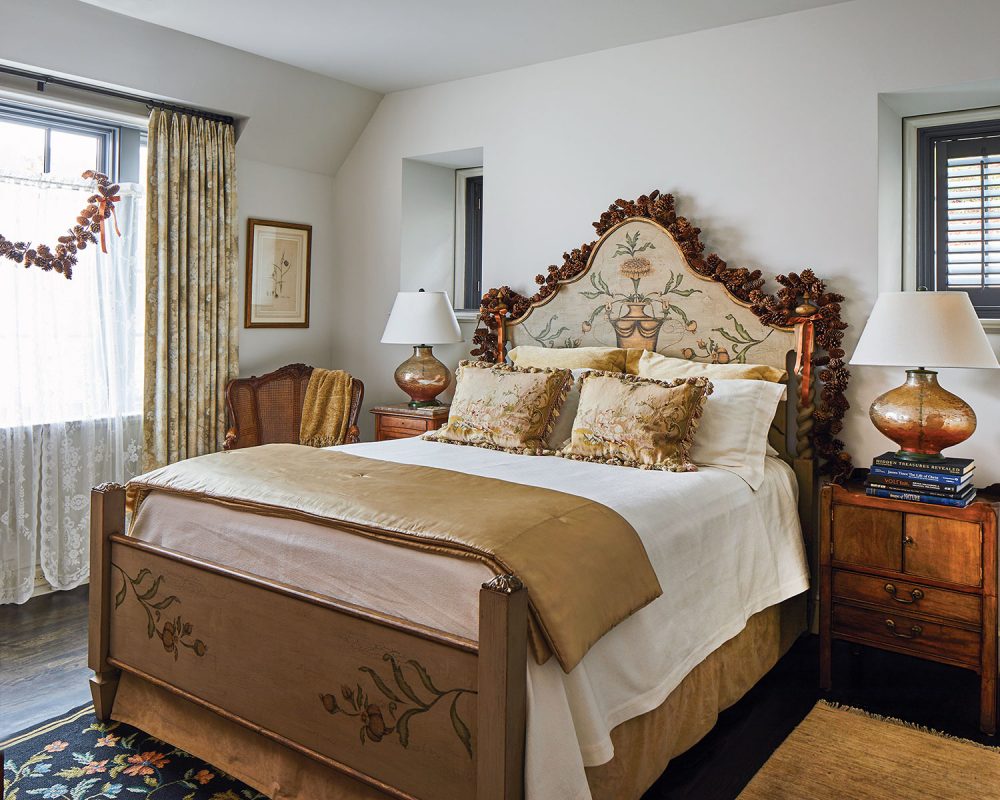 “The coppery tones seemed to call out for pine cones,” says Sylvester of this guest room. 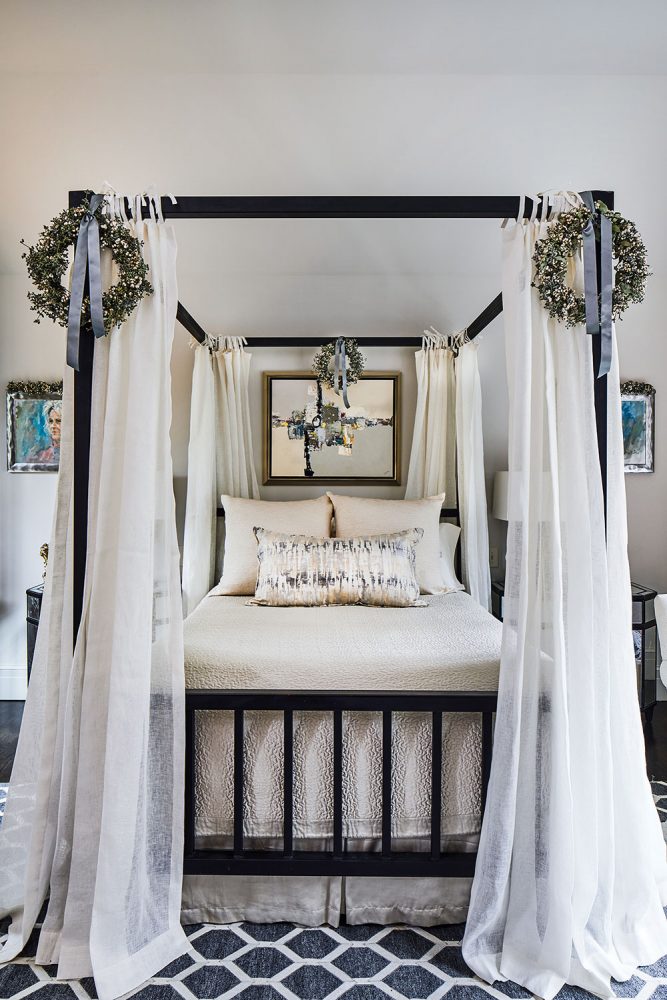 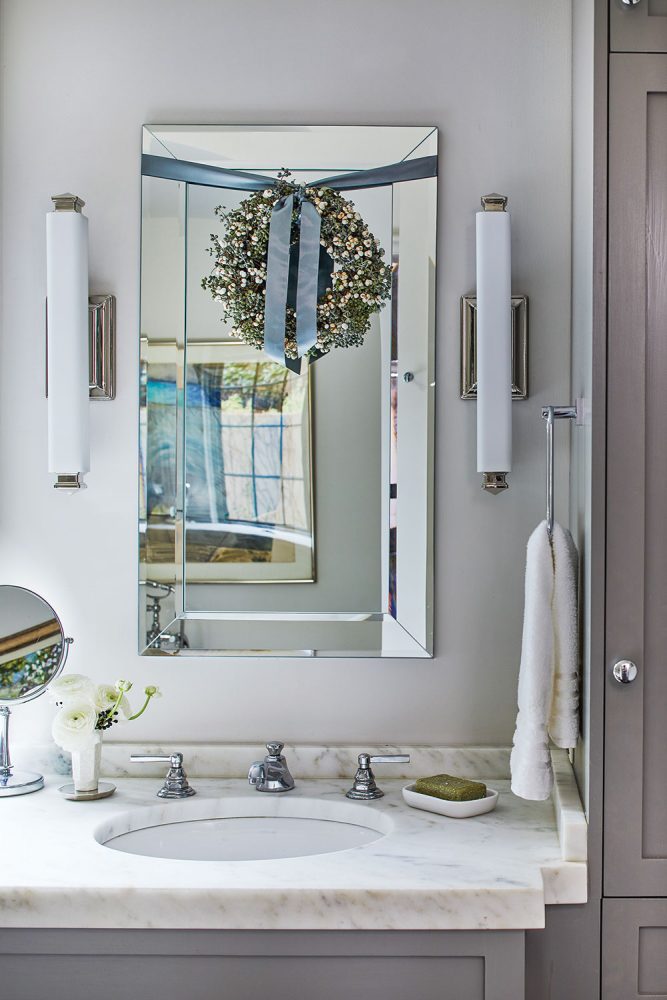 To create some excitement outside the house, Sylvester used abundant greenery and ilex berries on the mailbox and in window boxes. The decision to use the bright berries proved prophetic as rain pelted down for most of the weekend; the ilex added a cheerful note in the otherwise gloomy skies. Because the rain diverted visitors through the garage, Sylvester, in a tongue-in-cheek move, strung up a clothesline to which she randomly pinned pieces of a Santa suit to “dry out.” Not even the rain could dampen the festive spirit of everyone involved in this worthy and wonderful holiday tradition. ’Tis the season after all.

Click the arrows (or swipe if on a mobile device) to see more from this home, outside and inside.

On the front door, Sylvester tucked bits of lichen into a magnolia and pine cone wreath.

The holiday cheer extends to the patio and its splashing fountain.

A large tray is ideal for holding a low, holiday arrangement on a coffee table.

Year-round plantings on the patio include topiaries and other potted shrubs, herbs, and flowering annuals.

Cut branches of ilex berries appear to grow among the window box plantings.

Between the garage doors, a lantern and planter are dressed for the season, too.

Alice and Bob Schleusner have offered their homes to the Independent Presbyterian Church’s annual holiday home tour three times. “It’s such a great cause,” says Alice.

A roaring fire sets a cozy scene in the living room.

In the kitchen, a marble-top island displays nutcrackers and Santa figurines on a small fine rug.

The merry and unexpected combination of delphinium, sea holly, amaryllis, and ilex berries is a new Christmas favorite for the editors of Flower.

A spray of greenery adorns a snowshoe.

A petite wreath of smilax vine, elaeagnus whips, and tiny pine cones is a sweet detail on a bedroom dresser.

Another view of the master bedroom: For the floral arrangement on the dresser, Sylvester featured ranunculus and anemones.