Taking a note from Mother Nature and good sense—and backing it up with science—the luxury skin care company born of the Savannah tides is redefining aging gracefully
Stephanie Duttenhaver (left) and Cindy Edwards, founders of Sapelo

Consider the gardenia, that iconic flower of the Southern garden with an intoxicating scent. Yet if the bloom is not handled with care, its petals bruise and its beauty vanishes too quickly. For Stephanie Duttenhaver and Cindy Edwards of Savannah, this analogy applies to our skin and what happens when we expose it to harsh ingredients and treatments.”It’s common sense. If something hurts, don’t do it,” says Cindy, recalling her foray into trying retinoids in her mid-forties to counteract signs of aging. Instead of the fountain of youth, the product led to red, flaky, and inflamed skin, and she saw the same thing happening to her friends. “I thought about my grandmother, my mother, Audrey Hepburn, and Doris Day—anybody that I really considered beautiful. What did they do? They used good sense.”

That was her aha moment, but the business idea for Sapelo would come later when she met Stephanie while both were volunteering on the board of the Savannah Book Festival in 2012. The two bonded over their frustration with the modern beauty industry, and their quest emerged to create a gentler rejuvenating skin care line—minus retinoids, chemical peels, lasers, or dermabrasion.

They began with a list of inspirational ingredients, focusing on local botanicals and treasures from the Savannah coast. By poring over scientific studies, they narrowed the list to those that offered the beneficial properties they were looking for. Whereas many of their competitors relied on injuring skin in some way to recruit the body’s natural ability to heal, Cindy and Stephanie approached the problem from the opposite angle.

“We wanted to replicate the same peptides, proteins, and cascade of molecules that your body releases to heal damaged skin, without the need to first tear skin down. We believe that in the long run, people who use this kind of rejuvenation will have skin that runs a much longer marathon.” — Stephanie Duttenhaver, co-founder of Sapelo

Though neither woman began their entrepreneurial journey with a scientific background, they consulted with physicians (their husbands). They also sought a cosmetic scientist to source ingredients and develop Sapelo’s formulas, and as fate would have it, a nationwide search led right back home to a lab located near Savannah’s marshes. The fortuitous proximity meant Cindy and Stephanie could be there to oversee every step of the process, including testing the products personally.

Three years later, in 2015, they were ready to introduce their lineup of small-batch cleansers, masks, creams, and serums touting the natural properties of magnolia, oyster shell calcium, seaweed, essential oils, and Georgia honey, as well as the ever-so-delicate gardenia, whose stem cells turned out to be quite the skin-nourishing powerhouse. The new line was also notable for what it was not: no fillers, preservatives, or petroleum-based ingredients.

They named their brand Sapelo after a state-protected barrier island off the Georgia coast. And echoing the Savannah tides, Sapelo’s 3-step systems are designed to replenish and hydrate skin twice a day, morning and night. It’s less about abolishing wrinkles and more about fostering plump, dewy, and healthy skin—a philosophy that has garnered loyal customers, including Paulette Trenary and her two adult daughters, Elizabeth and Ally-Catherine.

A Growing Fan Base

Paulette learned about Sapelo word-of-mouth from a fellow Savannahian, designer Emily McCarthy of the eponymous lifestyle brand and boutique. Paulette quickly became a convert, appreciating how the products felt on her skin and that they were not sticky or oily, a must in the humid Southern city. Still, she was taken aback one evening when, while dining out with her husband, he said, “Whatever it is you’re doing to your skin, keep doing it. You have this glow about you.” “He had never complimented me on my skin before, never,” she says.

She introduced her daughters to the products as well, and when both moved back home temporarily during quarantine, the three enjoyed being able to share when they ran out. And speaking of running low, Paulette adds, “the way their serums are packaged, you get every drop out of it.” 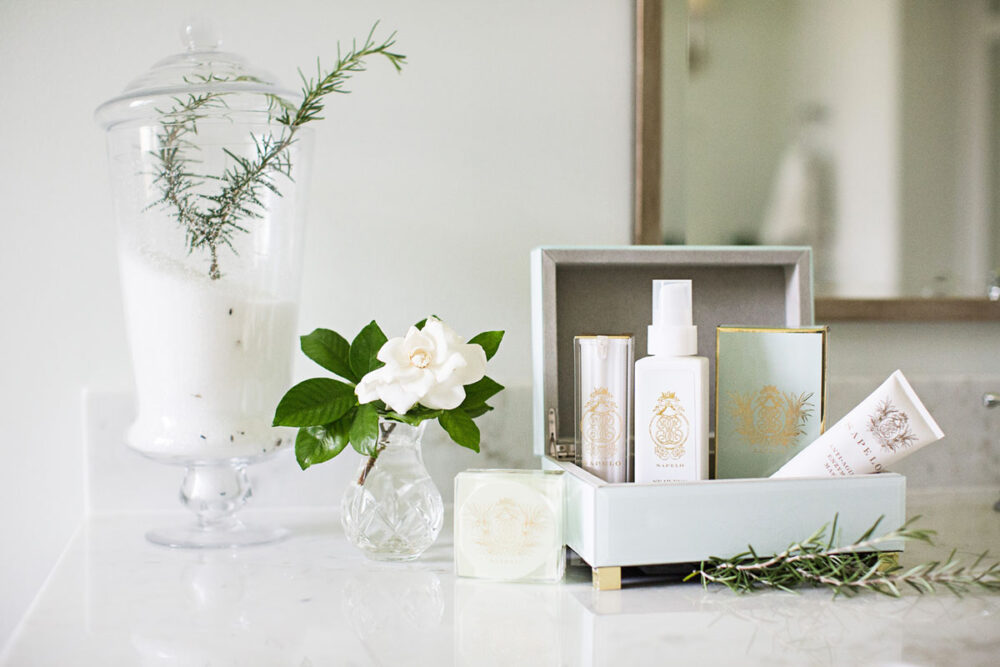 While Sapelo has created complete 3-step systems tailored to a variety of skin care needs, we asked Cindy and Stephanie which products they recommend for those who are happy with their overall routines but are looking for a boost.

Restoring Eye Serum is one essential that you will always find in both their handbags. In contains peptides that boost collagen production and skin cell count, botanical burdock to reduce dark circles, and antioxidants to strengthen capillaries. But what makes it essential is that it’s water based, which means you can add a dab over your makeup any time of day for a hydrating pick-me-up for the delicate skin around your eyes.

Their second pick: Spring Tide Serum. Though the Sapelo product line stays fairly constant (they focus on fine-tuning existing formulas versus developing new ones), this serum is the exception. The innovation came after Stephanie’s husband, a radiation oncologist, saw a peer-reviewed study about a wound-healing ingredient being manufactured in Norway. Derived from unfertilized, sustainably sourced salmon roe off the Scandinavian coast, the ingredient has been clinically shown to boost collagen production by an astounding 350%, as well as increase elastin and hyaluronic acid. “It took two years to develop a formula to stabilize it and get the pH right,” Stephanie says, “but it’s a superstar, and Cindy and I both use it morning and night.”

If you have a question about which Sapelo product might be right for you, Cindy and Stephanie are always a Zoom chat away.

Behind the Design with Bobby McAlpine
Fun & Festive Holiday Bar Ideas
A Chintz by Any Other Name
Easy Fourth of July Celebration at Home
Beauty Indulgence: Vintner’s Daughter
The Ultimate Dinner Party
Behind the Winning Design: Q&A with Michael Drolet
Terri Robertson / About Author
More posts by Terri Robertson