Meet Reed McIlvaine, the Man with the Plan

When Reed McIlvaine joined his uncle, famous New York florist Renny Reynolds, in 2000, the firm Renny & Reed was born. McIlvaine has been at the helm since 2004 and first appeared in Flower magazine in Summer 2010.

Flower: Reed, the last time you were in this magazine was almost 10 years ago! Catch us up on what’s new.

Reed McIlvaine: It’s been very busy! We’re currently celebrating our 10th year in the South Florida market and we’re busier than ever down here. The New York shop [which sells retail flowers and handles events] has basically been staying strong, while the Florida market [a retail store and Florida events arm] has been on a steady incline.

What did the shift toward Florida mean for you personally?

Until fairly recently my family had been living in Bedford, New York, where my wife and I were raising our two boys. But as our Florida office grew, I was going down for more and more meetings, and after a bunch of years of doing that, we decided to make a move down here in 2016. My boys are now 13 and 15, and we absolutely love it. My youngest is addicted to surfing, and we all love how the weather allows us to be in the boat and on the water year-round.

Fortunately, I love the process, which is good because most of the time is spent on the process. But my favorite parts are the very beginning and the very end.

The beginning is the creative part where I’ve met with the client and am brainstorming with our creative director. There’s a sense of excitement when an idea starts to click. And at the tail end, it’s when our team has lit the very last candle in a hotel ballroom and a server comes up to me and says, “I’ve worked here for 30 years and I’ve never seen it look this good.”

Having produced so many events over so many years, you must have your share of crazy stories.

We’ve experienced it all, and we always have a Plan B (and usually even a C and D). I always tell our team there’s a reason we’re so prepared with our proposal. Then we have extra bandwidth when the curveballs come.

It’s not often I have to deal with erupting volcanoes, but in the spring of 2010, we were working on a large wedding on Jupiter Island [Florida], and days before the wedding, news came that a volcano in Iceland had erupted, and the smoke was causing all flights from Europe to be canceled. All our flowers were being flown over from Europe, so we had to scramble to get flowers from other suppliers.

I’m sure that wasn’t the only story where Mother Nature played the role of the spoiler.

Right. Once when we were setting up in the tent for the wedding of Warren Buffett’s grandson near Omaha, we had to evacuate because baseball-sized hail was raining down from the sky. And I’ll never forget smiling to a mother of the bride as she got her hair done in Greenwich [Connecticut] when she asked how everything was coming along at the Belle Haven Club. I told her it was beautiful. In reality, the police had just given evacuation notices as Hurricane Irene was approaching. We moved the dinner from a tent outside to the ballroom inside, the party was magical, and everyone got home safely before Hurricane Irene showed up.

I’m exhausted just listening to all that!

I think of challenges as a natural part of a big production. No time to panic. Stay calm and problem-solve.

This is our entertaining issue, and since you’re an entertaining expert, give us some insight. What do you think makes a party successful?

It really is remembering the basics. Have lights on a dimmer, play great music, hand guests a drink as soon as they walk in the door, try to anticipate where people will have the best opportunity to talk. And candles. Candles everywhere! 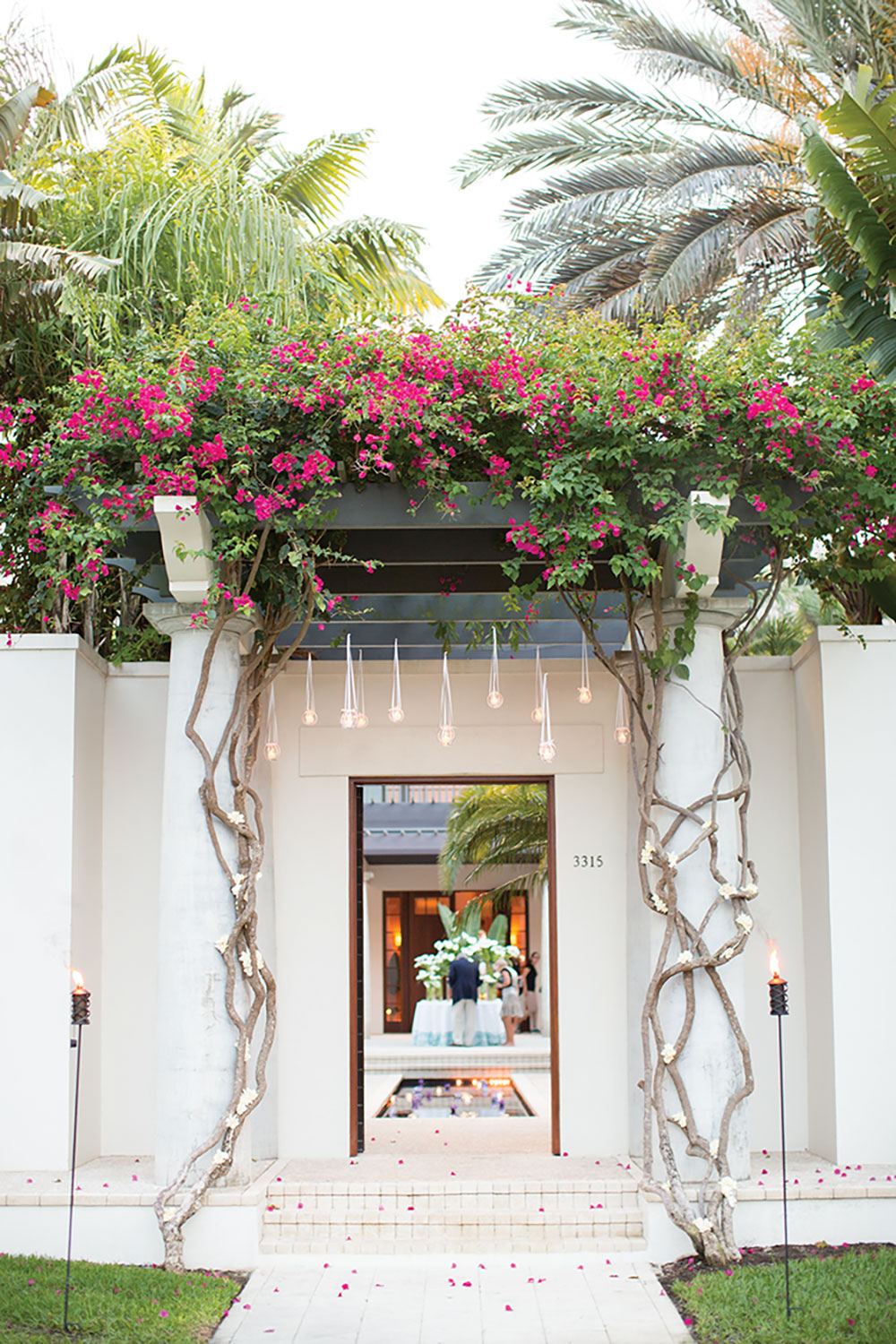 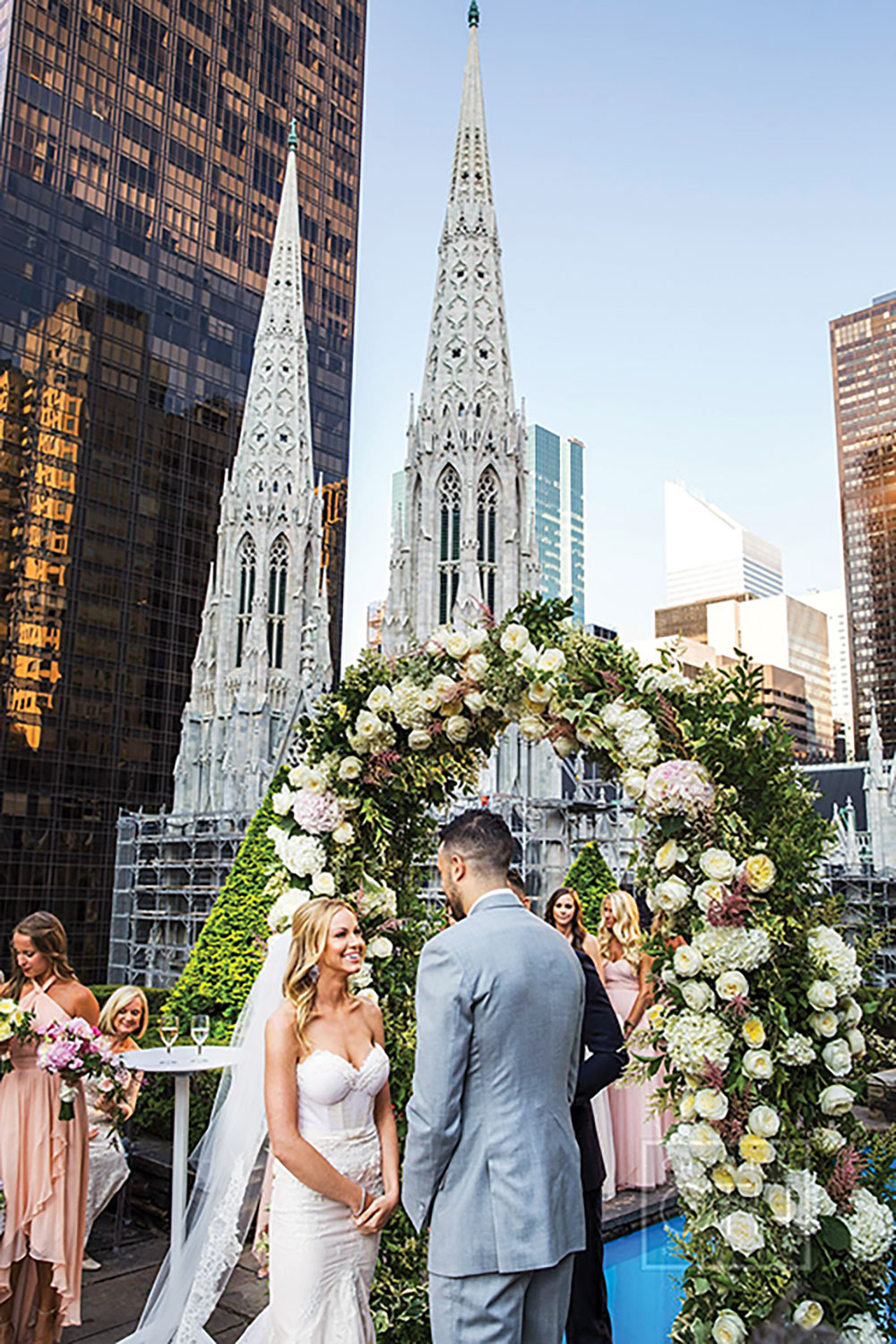 After the wedding of Prince Harry and Meghan Markle, McIlvaine noticed a heightened desire for lush floral arches of flowers. Photo by Christian Oth 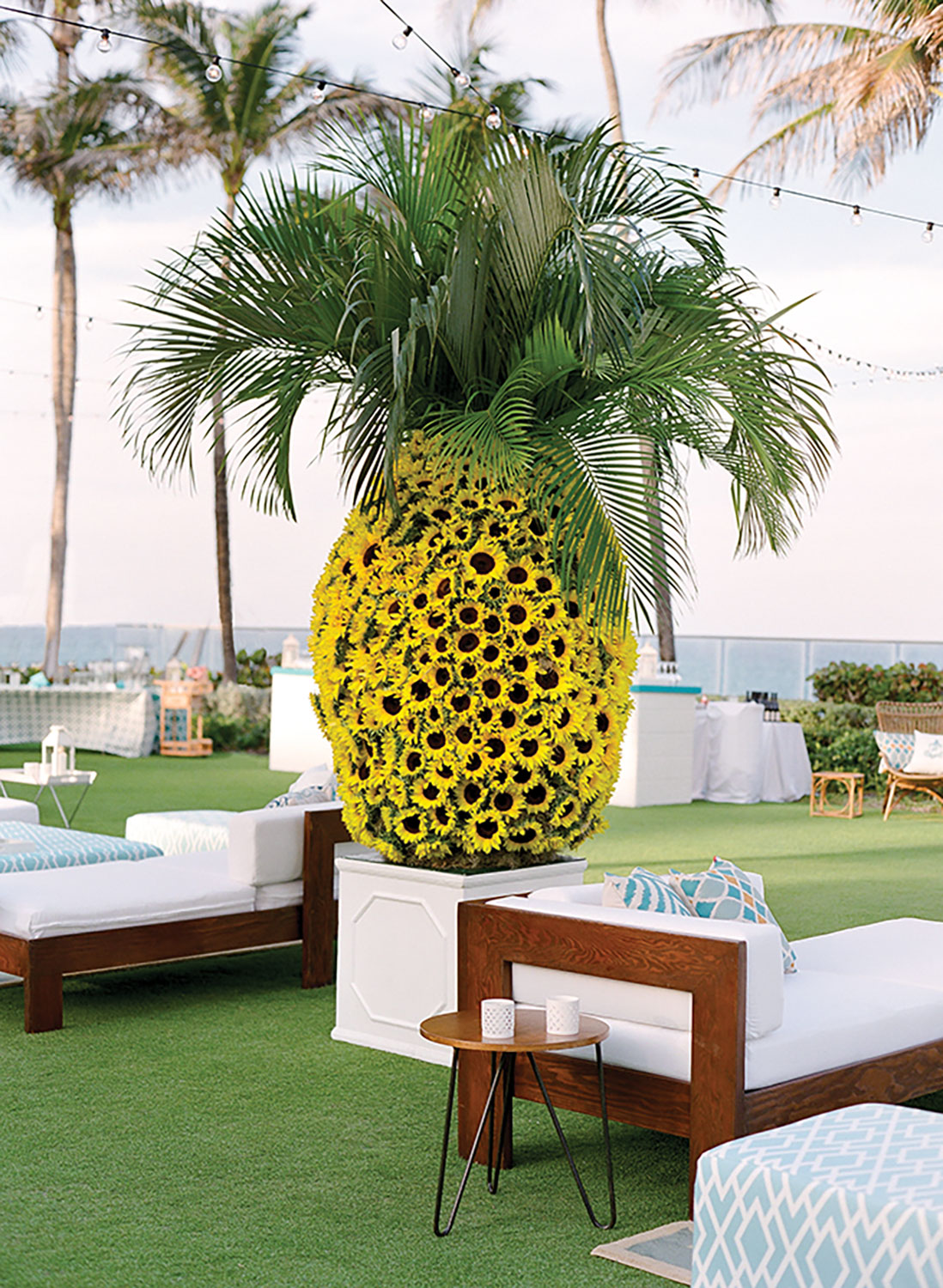 A gigantic pineapple of sunflowers and palms. Photo by Jose Villa