This grande dame of New Orleans decorating swathes houses in the Big Easy and well beyond with her cool palette, French antiques, and relaxed floral arrangements 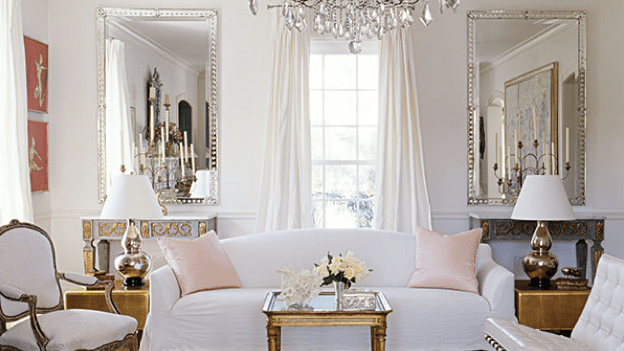 Flower: Gerrie, we’d love to know about your background and how you became interested in decorating houses.

GERRIE BREMERMANN: I was born in New Orleans, grew up in Palm Beach, but eventually New Orleans drew me back. I married, had three wonderful daughters, and until I was in my 40s, my job was rearing children. After they grew up, I started to think about what my next career move was going to be. I was doing a lot of philanthropic work, and it seemed that whatever organization I was working with always put a gold star by my name for decorating. So I began as a “philanthropic decorator,” putting on the parties in hotels and clubs and so forth, which turned out to be a wonderful foundation for my career. The first Junior League show house in New Orleans came along and they asked me to do a room. I took on a little bathroom and did a real number on it, with fabric on the walls, custom vanity, and such. Before I knew it, I had people calling me to work on their houses. It was an interesting time to begin because my friends and I were becoming empty nesters, getting rid of the baby dishes, buying nicer things, and re-covering the furniture. I guess you could say I kind of tripped into it.

And now, many years and countless houses (and still counting) later, you and your work inspire so many design aficionados. We’re curious—who was your own decorating hero when you were starting out?

The person who really influenced my look was John Dickinson, who was based in San Francisco. I had a friend who had moved out there, and everything in her house was white, tin, and plaster. I kind of went bananas over that, and it made me rethink my red velvet wing chairs and all the heavy stuff I had. I bought 50 yards of white duck, painted my walls white, got a sisal rug, and covered everything in the white duck. This was back in the late ’60s, and no one in New Orleans was really doing anything like that. My love of white was certainly Dickinson’s influence—he was fabulously talented. But having grown up in Florida, I’ll never get that beachy, tropical side out of my system. It takes the stiffness out of my rooms, and makes them a bit more relaxed. My palette is the sea, sky, and sand—light and cool, which is always welcome in New Orleans.

How would you describe New Orleans style, and how has it (and your own) evolved?

There’s such history here, and people appreciate European style. I’ve always loved French furniture, and 10 years after I began decorating, I opened a French antiques shop called HBS with two friends on St. Charles Avenue, and we began bringing pieces in. As I grew up more, and my decorating career along with me, I became a little dressier. I like to have some formal French, but not too glitzy—a little bit of gilding, and a little bit of ormolu. I think a lot of other people were also ready to get rid of their velvets and Victorian furniture. There weren’t but a couple of shops here selling French at the time—most were English—and now there are many of them. But I still keep going strong with what has for many years now been Bremermann Designs on Magazine Street.

Let’s talk flowers. Can you think of a favorite floral or garden memory?

My parents weren’t gardeners and my husband didn’t enjoy it, but I always loved it. I remember one Christmas I got electric hedge clippers, because I was always in the garden. Most people wouldn’t have thought that was a very exciting present, but I was thrilled. Although I live in a condo now, and I’m very much away from hands-on gardening, I still always have flowers in the house. The minute somebody’s going to drop by for a drink, I rush to the store to get the cheese and the flowers. I always feel like flowers bring the house alive. And I firmly believe you cannot have a beautiful house without a beautiful garden—I tell my clients that over and over. Even though I live on the eighth floor, I have a wonderful view.

If we dropped over for that cocktail, what kind of flowers would we find in your house?

I have a style I call a “Gerrie arrangement” that I use for myself as well as for clients, because they always love it. I use about a dozen and a half white roses and fix them with lemon leaves. I can make both small arrangements and big arrangements like that, and it has become sort of my signature. I also have a very special floral designer, Stephen Sonnier of Dunn & Sonnier. He gets into my apartment, knows where everything is, and puts it all together. He does flowers like I do them, but better.

How else do flowers factor into your rooms?

I do use some floral prints—Cowtan and Tout makes my favorites. I’m using more prints now than I have, say, in the last 10 years or so because I have a feeling that wallpaper and patterns are coming back. I love the old, faded-out cabbage rose prints.

Who or what inspires you the most today?

Traveling any place is inspirational to me. I’ve been going to Europe several times a year for the last 40 years. I’m a city girl, so New York, Chicago, and San Francisco always energize me. But you know what inspires me most? New Orleans—the music, food, flowers, galleries, and the houses—everything. I’m always glad to come home.