For farmer and florist Erin Benzakein of Floret Flowers in Washington, elegant varieties of chrysanthemums are stealing fall’s show 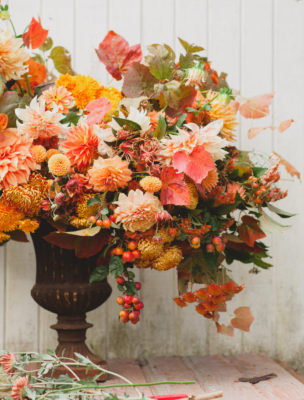 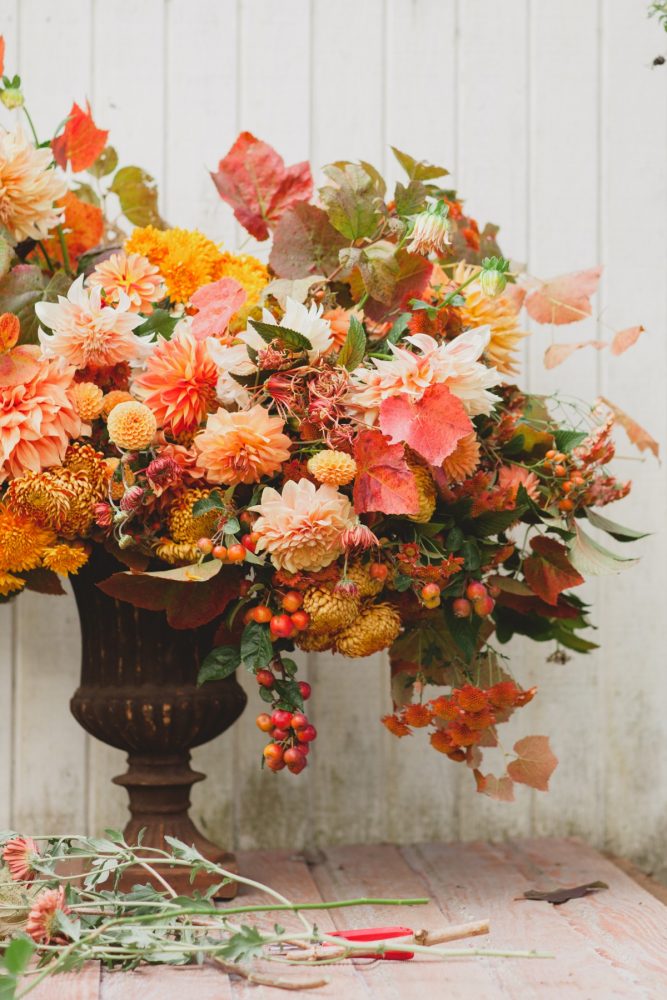 In arrangements, chrysanthemums “mix so beautifully with other ingredients the season has to offer, such as grasses, changing leaves, fruit and berries on the branch, and vines.” says Benzakein.

Erin Benzakein and her family have an organic flower farm in Washington’s Skagit Valley, and as a farmer-florist, she is extraordinarily particular about the flowers she grows. Seeking out the seasonal, abundant, and hardy—not to mention the gorgeous, too—she also has to weigh the practicalities of running a business.

She needed a good crop for fall months. “I was looking for something to extend our farm’s flower season, which normally ends in mid-October, and also something to supply late-blooming focal flowers to add to my fall arrangements. When I discovered the amazing options in the chrysanthemum family, I knew I had hit the jackpot,” says Benzakein.

But don’t mistake her flowers for your run-of-the-mill garden mums—the kinds that show up each September in garden centers and big-box stores with their mounds of tight little buds in white, gold, lilac, or rust. She’s enamored with varieties of chrysanthemums that lend themselves to surprise, varieties so elegant and aesthetically unusual that they beg a closer look. A few favorites are named ‘Wind Dancer,’ ‘William Florentine,’ ‘Kyoji,’ and ‘Mary Anne.’ Benzakein discovered them after learning how diverse the forms could be. “The varieties that we’re growing for cut flowers can be several feet tall,” she says. “They have this rainbow of color, and then there’s the shapes—the fluted petals, the big quilly ones, the spiders. No one would guess that they’re chrysanthemums. Floral designers are going crazy for them.” 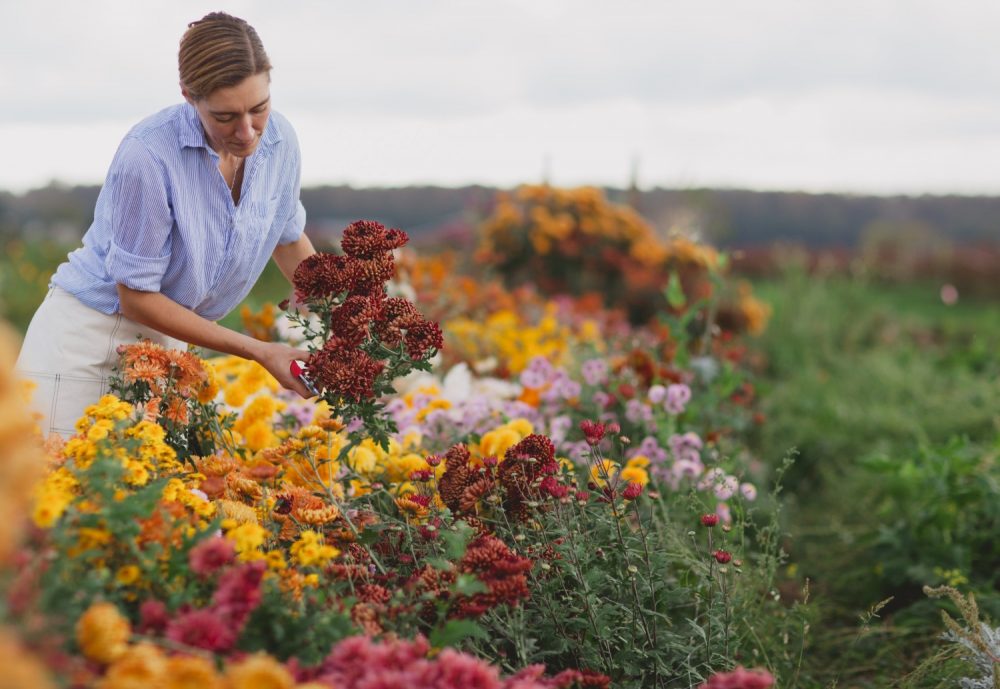 Katherine Anderson of Marigold and Mint and the London Plane in Seattle is a big fan. “I have actually always loved chrysanthemums,” she says. “I first encountered some of the awesome varieties at the Volunteer Park Conservatory in Seattle where they are on display during late autumn. It’s just an added bonus that Erin grows them and I am able to purchase such a variety for my two shops. I love their muted colors, which seem to signal the fade from fall toward winter. For me, they mark the end of a long, abundant growing season here in the Northwest.”

Chrysanthemums are in the Asteraceae family and have a concentric head that is comprised of tiny individual petals, resembling a sun surrounded by rays. Think of asteroids and then imagine watching a spray of twinkling fireworks traveling in reverse: an orb of shooting stars homing back to a central point. For the chrysanthemum (which, in fact, did inspire a certain firework design) that central point is Asia—specifically China as early as the 15th century BC and then Japan in the 8th century AD. We catch glimpses of this exotic past in brush paintings from the Song dynasty, Chinese export porcelain, and Japanese haiku. In China, the chrysanthemum has long been revered as a medicinal plant (the floral tea is a pick-me-up and tonic), and the flower is considered one of the Four Noble Ones—or Four Gentlemen—in art, a symbol of autumn and longevity, along with orchids for spring, bamboo for summer, and plum blossoms for winter. In Japan, the chrysanthemum is a badge of honor, where a citizen’s highest level of decoration is the Supreme Order of the Chrysanthemum. 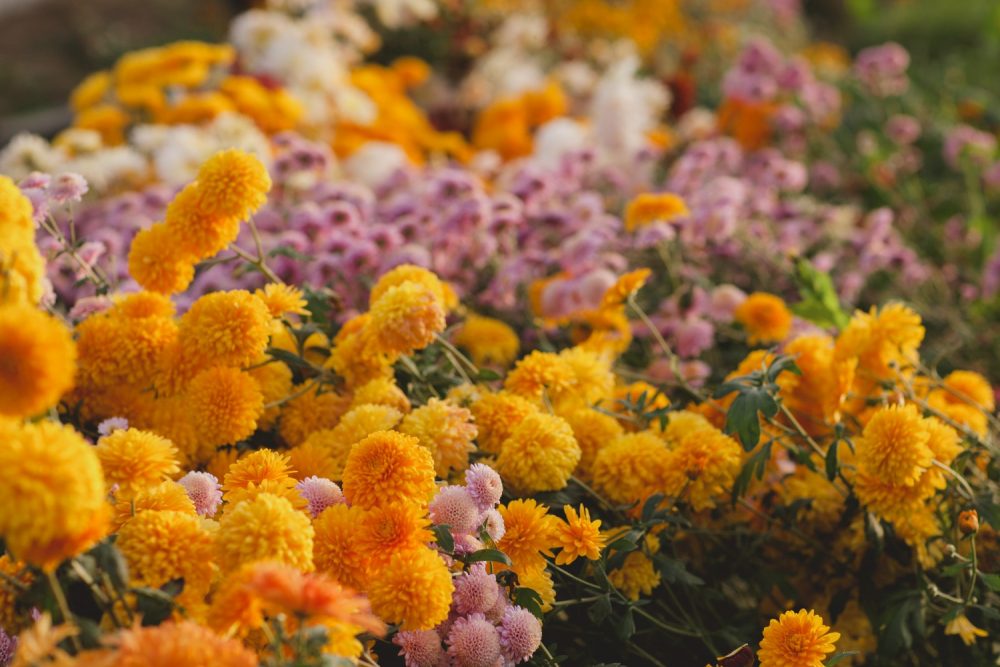 Though the flower didn’t venture to American shores until the early 19th century, it has ultimately garnered a devoted group of enthusiasts who grow them for competition and even for elaborate displays that showcase the art of horticulture, such as Longwood Gardens’ annual Chrysanthemum Festival, during which the floral form is cultivated into mind-boggling shapes. This is serious art. But perhaps the flower’s more common association has been as the go-to for homecoming corsages or as fillers for fall container gardening. From high to low, the chrysanthemum is nothing if not versatile.

However, it’s the old cultivars that are drumming up interest from a new generation of floral designers. Benzakein attributes their renewed popularity to several factors: “First, mums are late flowering and coincide perfectly with the fall holidays,” she says. “Second, they are incredibly easy to grow and are a fun addition to any garden, large or small. Lastly, this plant family offers so many different flower types, forms, and colors, so they are a flower arranger’s dream.”

When everything else in the garden is retreating from summer, choruses of mums are perky harbingers of fall. “They mix so beautifully with other ingredients the season has to offer, such as grasses, changing leaves, fruit and berries on the branch, and vines,” says Benzakein. “Mums allow me to continue making abundant, seasonal arrangements all the way through the end of autumn, which has been a total luxury.” With hardy chrysanthemums, the fall show will go on—and the display just keeps getting more interesting. 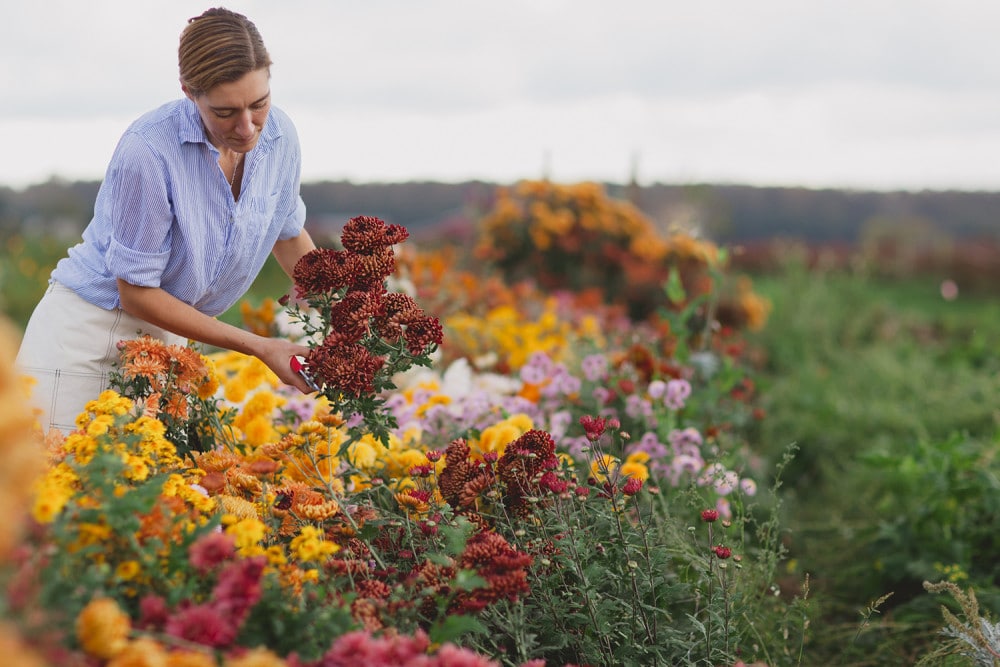