At the historic Mohonk Mountain House, you can take a deep dive into nature while pampering your senses and channeling your inner flower child 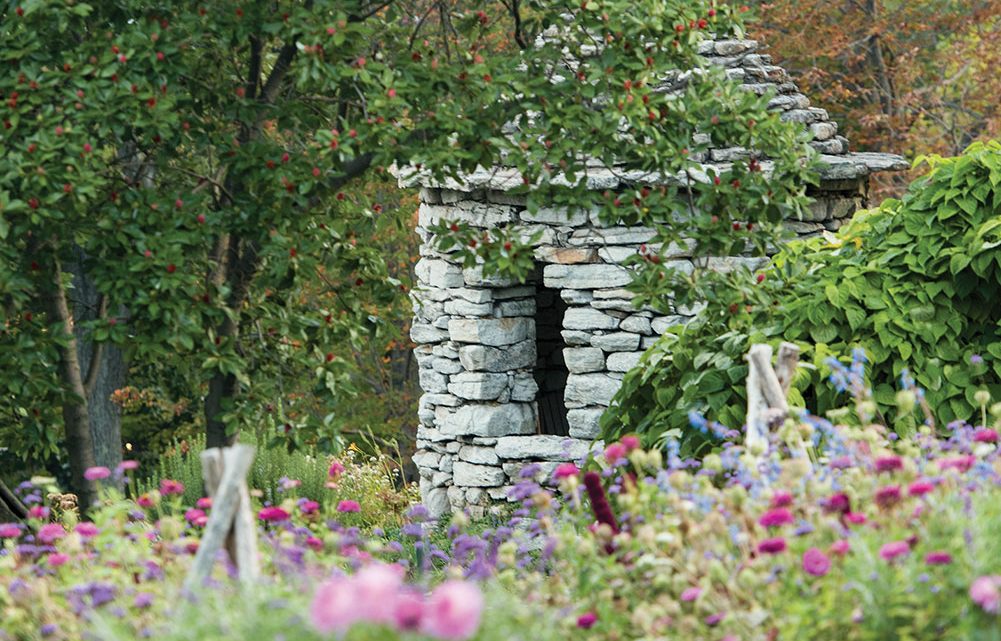 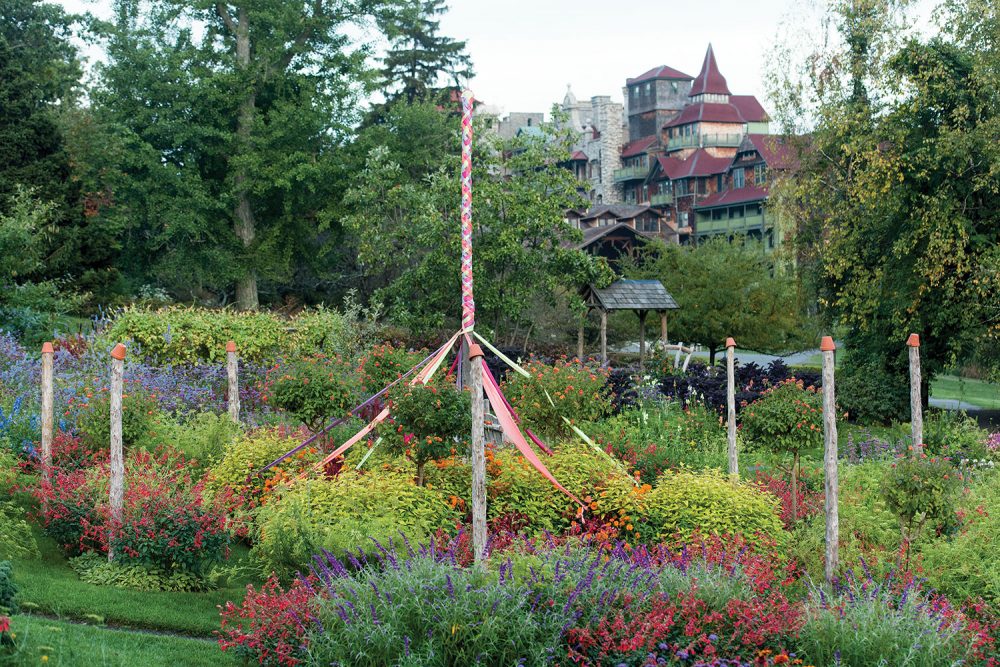 Within easy sight of Mohonk Mountain House, the garden spends summer in constant splendor. For the Scarborough Fair display, a Maypole was installed in a bed of Salvia leucantha ‘Santa Barbara,’ Salvia elegans ‘Golden Delicious,’ ‘Garland Orange’ marigold, and Salvia ‘Ember’s Wish’ with a backdrop of ‘Redbor’ kale.

Only two hours from New York City and tucked into a mountain range that nobody pronounces properly, Mohonk Mountain House is a Brigadoon-like lodge where guests go not only to relax, recharge, and indulge themselves but also to spend time immersed in nature. The resort is quintessentially outward-bound.

Walk the halls of the lodge on a fair day (or even when the weather is less than perfect), and virtually no one will be tarrying indoors. Instead, head out to the trails, and that’s where you’ll pass other hale and hardy visitors—walking sticks in hand—immersed in the splendor of the Shawangunk Mountains (affectionately called “The Gunks”). 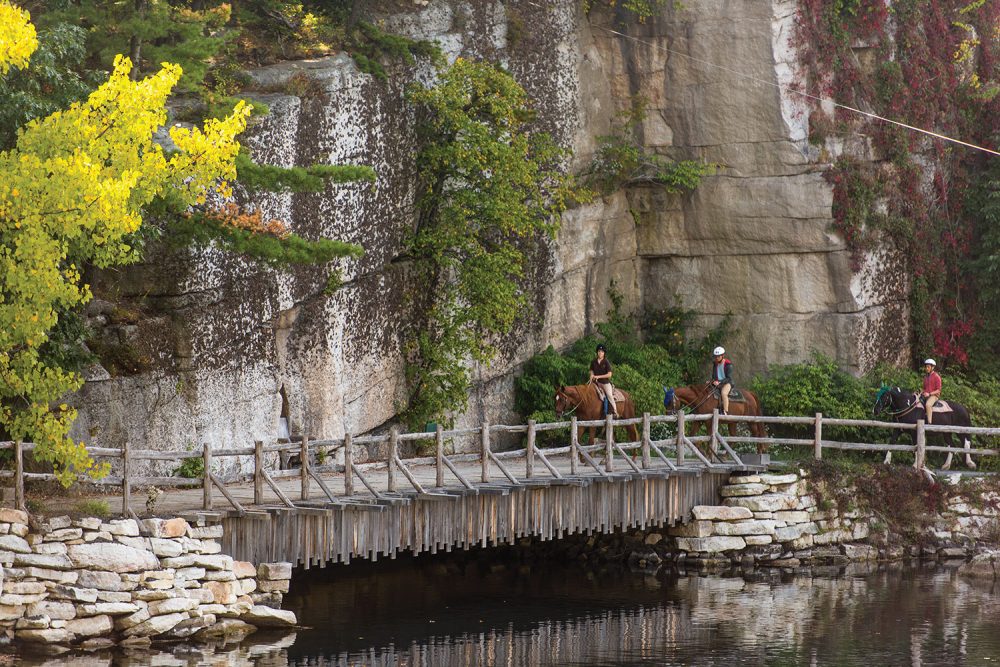 Horses are available at the Mohonk stables.

The surrounding trails are heaven at a high elevation. Syncopated by signature rustic gazebos along the ridgelines, every step offers a tapestry of wonder and beauty. But perhaps Mohonk’s most unique feature is its world-class garden. Bridging styles from the past with daring innovative design, the hotel’s ingenious gardeners dream up a new floriferous fantasy each season, causing travelers to make Mohonk Mountain House an annual pilgrimage. 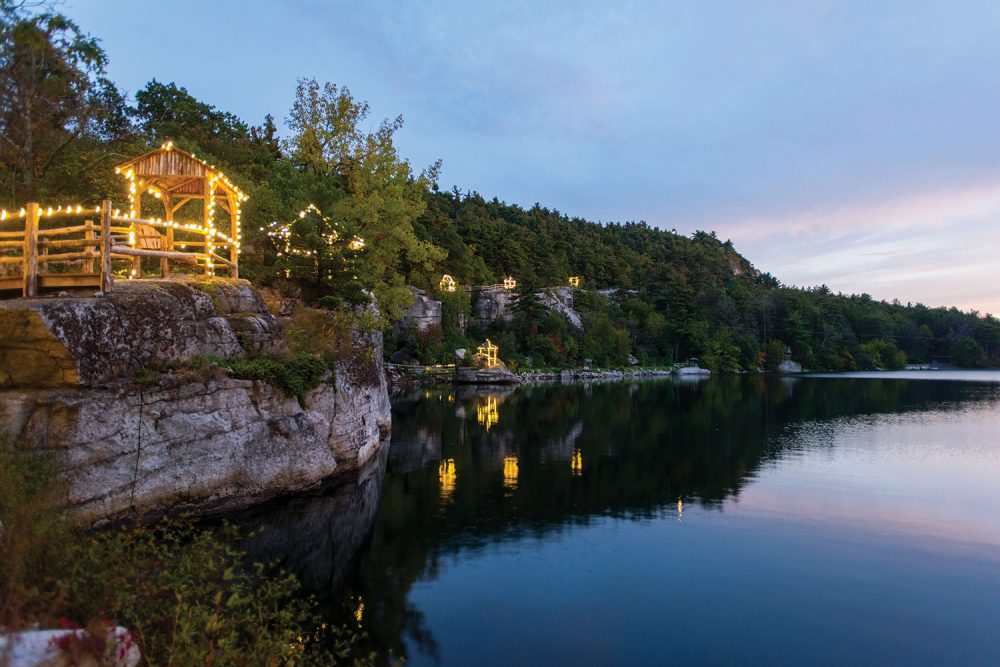 The signature rustic gazebos and railings across the lake from the lodge are lit at dusk.

It all began 150 years ago when Albert Smiley was lured to the location after his twin brother reported finding the vista of a life- time. An ardent outdoorsman and nature-loving Quaker, Smiley came to check out the view near the off-the-beaten-track town of New Paltz, New York. Sure enough, there sat an idyllic tavern nestled into mountain ridges overlooking a magnificent glacial lake. In a blink, he and his wife purchased the tavern plus 300 acres around Lake Mohonk as a summer home. But the only way they could afford to reside in the wild was to share it with others. The tavern was expanded and turned into a place of retreat, with the Smileys reverently forging trails into the terrain that would not disrupt the pristine scenery. The Smiley family has owned and stewarded Mohonk ever since.

Signposts point the way to the multitude of outdoor destinations.

Fresh pasta is rolled out daily in the kitchen.

Inventive salads, such as this confection of local baby kale tossed with strawberries, walnuts, and shaved Parmesan and dressed with sherry-shallot vinaigrette, are guest favorites.

Available for a spin, each handsome custom-crafted rowboat took 12–18 months to build.

Rustic trellises are omnipresent. This one supports hyacinth beans amid bronze fennel, millet, and Verbena bonariensis.

Pathways weave from one bed to another with rustic Eastern cedar benches and arbors along the way.

Now with 265 rooms and 7,800 acres containing 85 miles of hiking trails, Mohonk still retains its 19th-century charm. As the resort’s general manager, Barbara Stirewalt, points out, “This is a house—each room is different, and hospitality is what we are all about.”

That hospitality includes a chef who whips up savory meals using just the right seasonings to bring out the goodness in locally sourced produce. While the Mohonk experience begins with the accommodations and feasts, it also includes an “awakening” process, which involves communing with the resources at hand, including classes in mindfulness and “forest bathing” (meaning keying into the bounty of the forest) led by Nina Smiley, PhD. 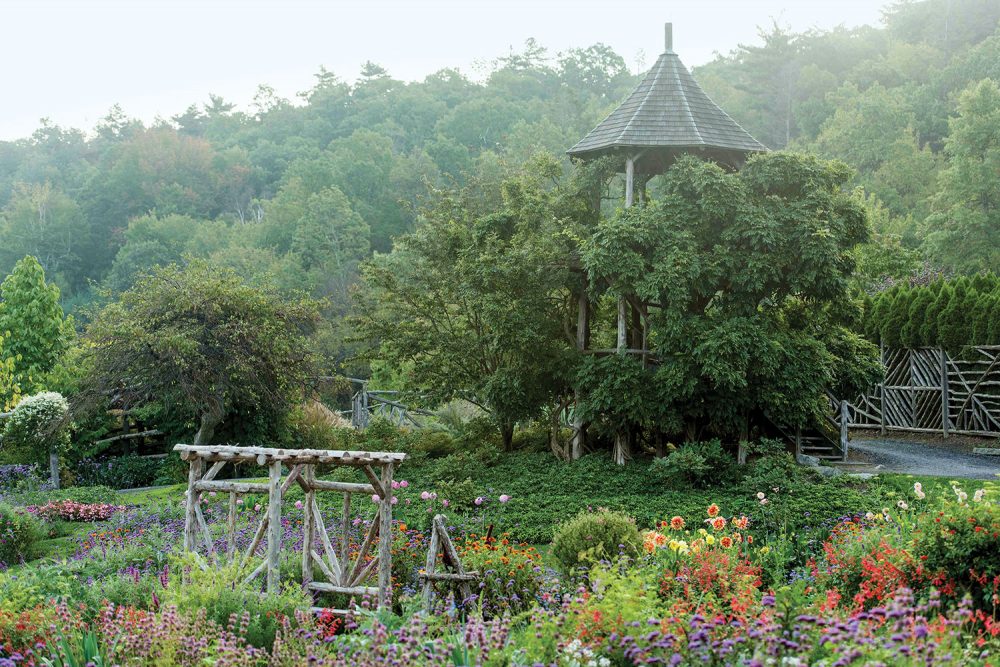 The Thuja occidentalis maze was planted 20 years ago in the shadow of the iconic two-story summerhouse encased in Wisteria sinensis that serves as a lookout tower.

In addition to the heart-stopping natural setting, the Smileys have put enormous effort into the property’s landscape design. In 1888, Albert Smiley began installing a massive garden, finishing the ambitious display 10 years later. Planted borders skirt the house, while beds of blossoms spread beside a labyrinth, gazebos, and rustic accents. Traditionally, those beds were laid out parterre-style with a simple repertoire of bedding plants. 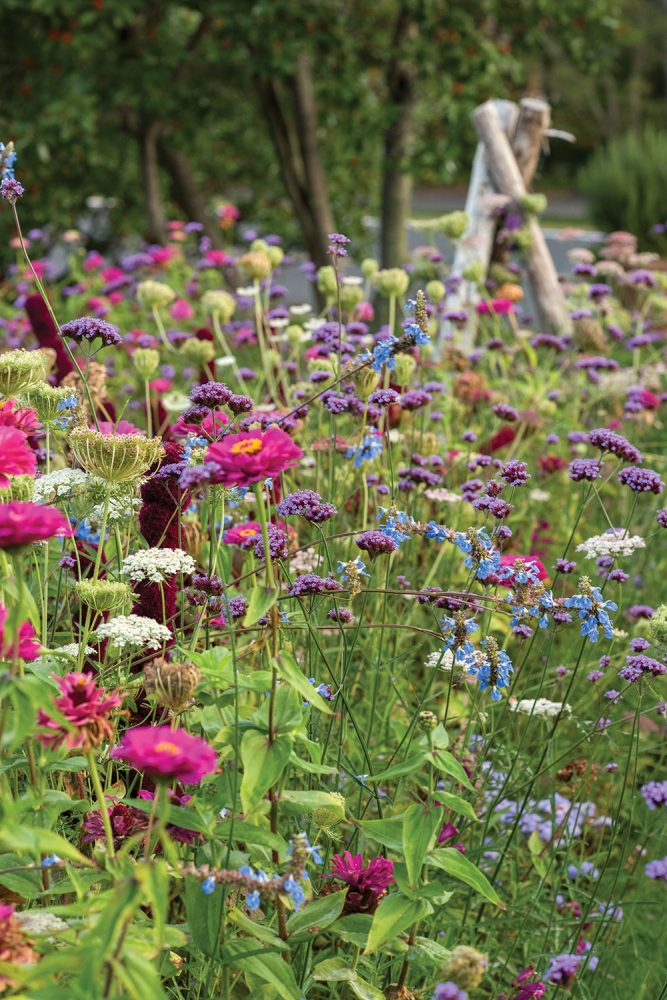 Matching heights in an annual meadow can be tricky, but Zinnia ‘Tudor,’ Salvia uliginosa, Ammi ‘Dara,’ and Verbena bonariensis all flow brilliantly. 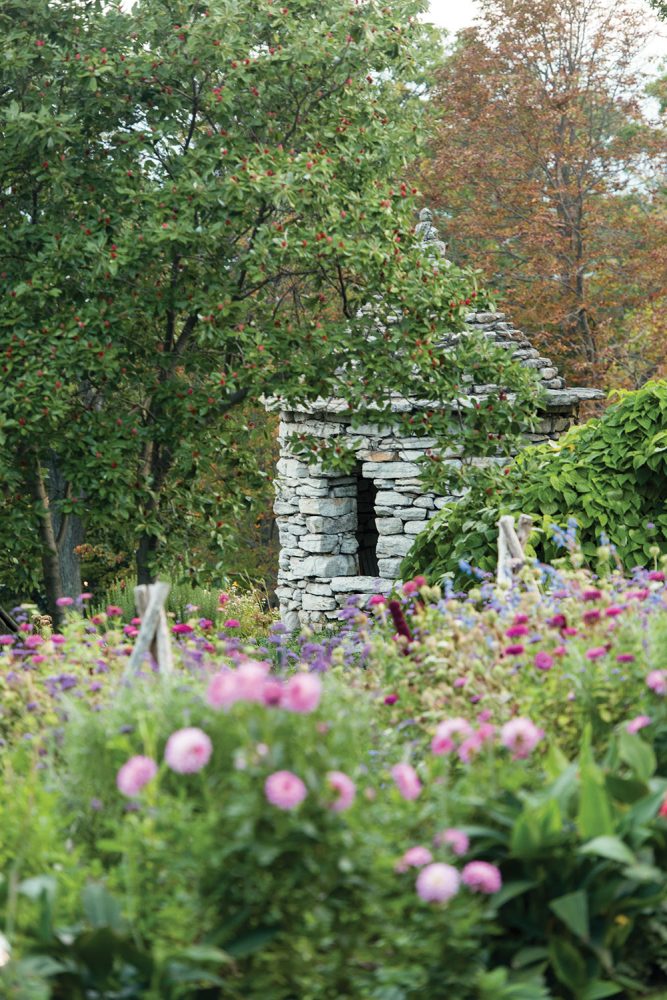 Built of local quartz and Rosendale cement (the same type used for the Brooklyn Bridge and other landmarks), the stone summerhouse is more than 100 years old.

Current garden manager Andrew Sinno created meadows of mixed dahlias, amaranths, cosmos, zinnias, fennel, ammi, and other annuals, all carefully interwoven to form a multidimensional broadloom as you wade among them. Carefully combined annuals and tender perennials that blossom in sync and complement one another colorwise make for a breathtaking sight. By adding volume and employing blowsy annuals such as fennel, tithonia, fuchsia, and Salvia uliginosa, Sinno’s gardens are strikingly naturalistic.

Mohonk is a gardener’s dream. Even in winter, massive tropical plants and voluptuous arrangements crafted by the staff florists accent the halls. The toasty greenhouses remain forever filled, stocked with a trove of rare plants available for purchase. As an annual crescendo, staff and guest lecturers divulge their secrets in a late-summer Garden Holiday event. That program is just another instance when the mountains’ majesty combines with horticulture to create a transformational interlude.

When the garden spends the entire season in the spotlight, every element must be picture-perfect for the duration. Although Mohonk’s annual themed garden is not its only flowering venue, it is certainly the most visited. And the brave new concept of intermingled annuals planted out in a meadow style was particularly daring to compose and maintain. Garden manager Andrew Sinno’s challenge lies in orchestrating a scene that holds its high note over the long haul.

Of course, any garden takes time to reach its zenith, especially in frigid, mountainous Upstate New York. That’s why plants are nurtured in Mohonk’s green- houses to be whisked out as soon as danger of frost has passed in April—the sweet spot seems to be incorporating a combination of 40% seed-started plants, 40% cells and plugs, and 20% cuttings from overwintered mother plants. Snapdragons, foxgloves, dianthus, geraniums, and herbs lead the pageant before slower bloomers kick in.

If all goes well, color begins peppering into Mohonk’s bedding garden nicely by the end of May, with full splendor achieved not long after. Cosmos, cleome, and Ammi majus (false Queen Anne’s lace) tend to bow out—although Ammi ‘Dara’ delighted everyone with its staying power. Meanwhile, self-seeded Verbena bonariensis took up the slack while serving as a leitmotif throughout the scene. Fennel and parsley will also continue going strong. Meanwhile, Sinno keeps extra dahlias and cannas waiting in the wings to fill in any gaps. And so it goes until the next frost nips the garden, sending the crew scurrying to put everything to bed once again.