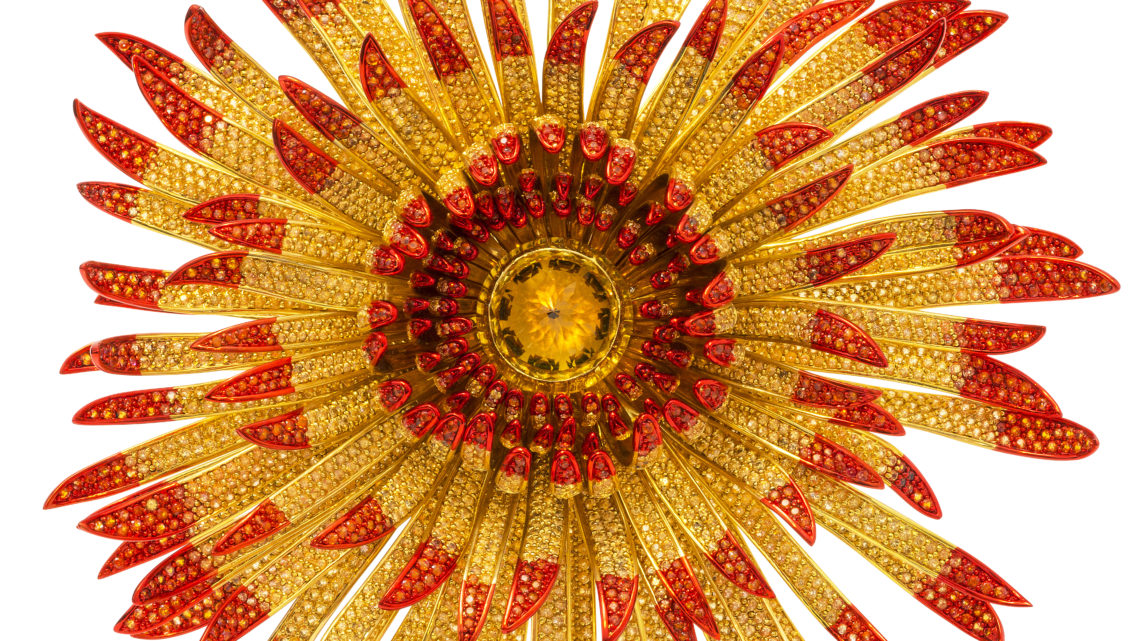 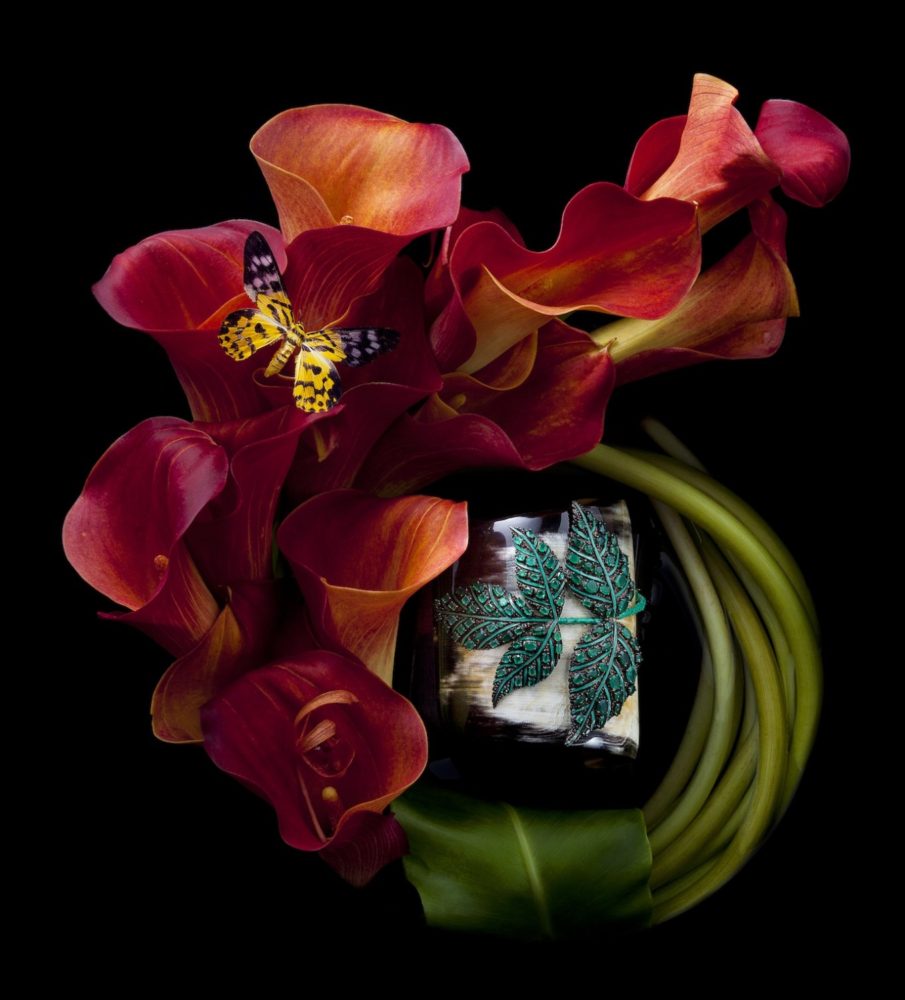 A natural horn cuff with spring leaves in green agates: “The comfort and ease of my designs are as important as the aesthetic,” says Laurenza.

MATTHEW CAMPBELL LAURENZA’S design sensibility, along with an entrepreneurial spirit, revealed itself at an early age as he was growing up in New Mexico, Texas, and Kentucky. While his friends were engaged in the world of video games and soccer practice, he had other things to do with his time—namely, carving wooden Santas, selling them to retailers, and socking away what seemed like a lot of cash at the time. “I had more money in my bank account than any other 13-year-old I knew,” says Laurenza, with a laugh. He was also fortunate to have parents who fostered his creative endeavors from the beginning. “When I told them I wanted to carve things, they went and got me everything I needed, from tools to raw materials. Later, when I wanted to work with metal, they did the same, even offering up some family silver in the process to fashion my first creation. I made a silver centerpiece!” 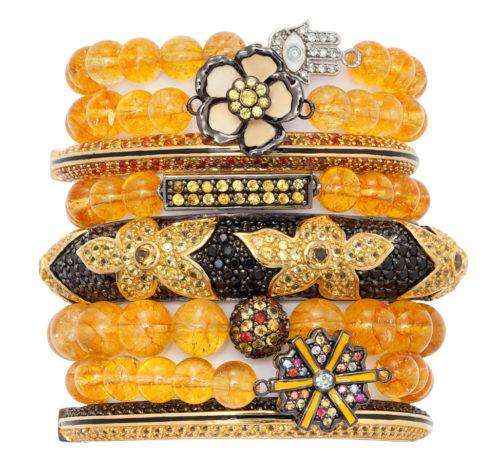 A stack of colorful bracelets evokes the liveliness of Cuba in Laurenza’s Havana collection.

It was during a summer internship at Savannah College of Art and Design that Laurenza found himself in the precious metals lab, and the seed for his future profession was planted. He went on to study architecture before settling into sculpture in college, but began making custom jewelry for clients while still in school. “I enjoy doing commissions, but you are limited by what the clients envision and often by the stones they want to use. I wanted to design without those constraints.”

The precocious and intrepid designer moved to Thailand in his early twenties where he eventually launched his eponymous jewelry collection. Today, while he continues to call Bangkok home base, a sense of adventure, business concerns, and love of travel ensures that he’s rarely in one place for long. Indeed, in any typical month he may find himself in several countries—and often continents. Laurenza always returns to Thailand invigorated and overflowing with ideas for the next season, which typically results in about 300 designs with around 80 percent going into production. Despite such an abundant output, he has his hands on every piece, from the sketches to the threedimensional prototypes to choosing and placing the stones. Each bangle, ring, or necklace can take up to eight months to complete.

When you look at a garden full of exuberant flowers, you never say, ‘Those colors shouldn’t be next to each other,’ so I keep that thought in mind when choosing and mixing stones. –MATTHEW CAMPBELL LAURENZA 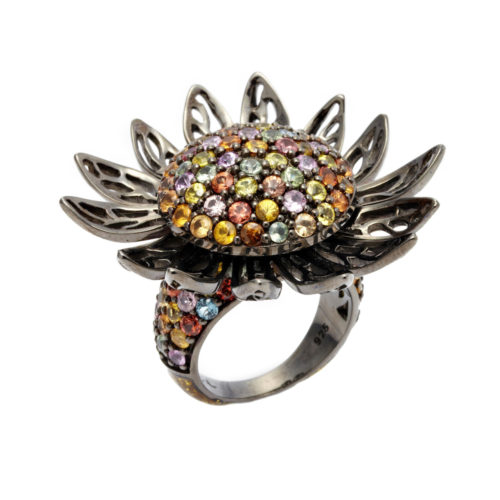 “Water Lily” ring from Matthew Campbell Laurenza’s Cleopatra collection is made of sterling silver plated with black rhodium and hand-set with multicolored sapphires.

While Laurenza absorbs inspiration from an array of sources, his color palette is keenly informed by the garden. “I think the view of color in accessories can be somewhat limited in America. There is this idea that you shouldn’t put certain colors together, and the end result can become very monochromatic,” he says. “When you look at a garden full of exuberant flowers, you never say, ‘Those colors shouldn’t be next to each other,’ so I keep that thought in mind when choosing and mixing stones.” For motifs, he’s often drawn to orchids, hydrangeas, and daisies, as well as a host of garden visitors such as beetles, butterflies, and dragonflies. “I am also inspired by the botanical images of German photographer Karl Blossfeldt when it comes to form,” says Laurenza. His Villa Madama collection features a riot of color-saturated flora and fauna including horn cuffs festooned with jeweled lilies-of-the-valley, spring leaves, and monarch butterflies.

However, talent and an abundant garden of inspiration alone will not always translate into commercial success, as Laurenza so readily admits. “Luck has a lot to do with it,” he says, “and any designer who doesn’t mention that in his or her story is leaving out an important component.” His own dash of luck came not from the jewelry industry, but rather from the travel field, which seems apropos given his penchant for globe-trotting. The former editor of Travel & Leisure, Nancy Novogrod, was in Thailand and purchased a few Laurenza pieces. When she returned to New York, she showed them to Bergdorf Goodman, and the retailer jumped on board, debuting the M.C.L. collection in 2007. Other luxury retailers soon came calling, as did the fashion press and celebrity stylists. 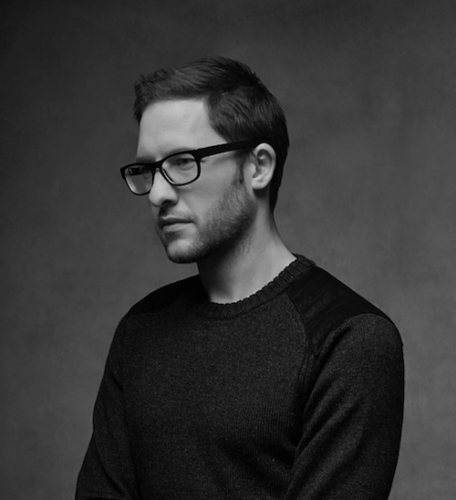 Now Laurenza’s jewelry makes frequent appearances on red carpets and fashion runways, while the designer is still often found on runways of the airport variety. Given his prolific imagination, it’s also not surprising that he continues to seek new avenues of artistic expression. His home décor collection is in development and will include tabletop items, serving pieces, frames, and baby items, all created in his own studios. “I get such enjoyment out of making things,” he says, “and I don’t think that will ever change.”

Explore more of Laurenza’s collections, see what celebs are wearing his work, and shop for pieces at MatthewCampbellLaurenza.com. And find more designs in the slideshow below.

Matthew Campbell Laurenza partnered with Atelier Swarovski to create super-scaled sculptures of flora and fauna, including this spider mum.

A natural horn cuff with spring leaves in green agates: "The comfort and ease of my designs are as important as the aesthetic," says Laurenza.

"Water Lily" ring from Matthew Campbell Laurenza's Cleopatra collection is made of sterling silver plated with black rhodium and hand-set with multicolored sapphires.

A stack of colorful bracelets evokes the liveliness of Cuba in Laurenza's Havana collection.