Ariella Chezar hosts a workshop at Chalk Hill Clematis Farm, where attendees soak up the designer’s signature floral style and a little California sun. We tag along for a picture-perfect experience 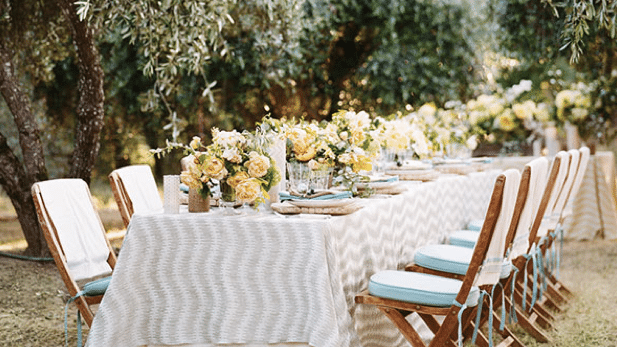 Like an artist’s muse, the grounds of Chalk Hill Clematis Farm cast a spell over an intimate circle of flower lovers gathered for a three-day apprenticeship with Ariella Chezar, a New York–based floral designer renowned for her natural, garden-inspired style. “Plants of their own accord want to grow over and around, and that’s the style of arrangement I love making,” she says, as she clips and snips from the bounty that grows on the grounds of the Sonoma Valley, California, estate. Relying on local and seasonal blooms, Ariella’s floral arrangements are best described as wild, romantic masterpieces, and she’s able to make something as simple as fruit-bearing branches look like a Dutch still-life painting. The eight attendees have traveled from near and far in hopes of capturing a bit of Ariella’s artistic magic during the master class. 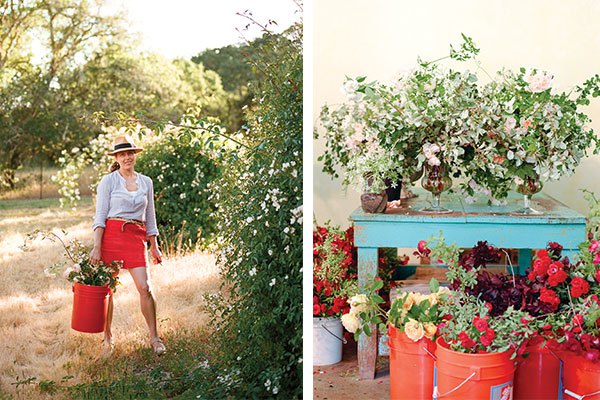 Left: Always at home in an abundant garden, floral designer Ariella Chezar leads the flower harvest each morning. | Right: A cluster of completed centerpieces and buckets of the garden spoils fill the workshop workroom.

Mornings at Chalk Hill are fueled with tea, sweetened from honey cultivated on the farm, and officially begin with the flower harvest. Ariella leads the women on a scenic walk through their classroom—a 15-acre sanctuary of flowering shrubs, rambling roses, and plenty of climbing clematis for the taking. “This is a flower lover’s paradise,” she says. Indeed, the veritable field day produces armloads of clematis and buckets brimming with hedge roses and branches, as well as fruitful shop talk. “I’m in love with the more humble flowers; trending to me is neither here nor there,” she continues, as her students eagerly pour into the farm’s picturesque country barn. Inside, weathered work tables, strewn with glass compotes, ribbon, and shears, line the sun-filled room punctuated by stenciled walls.

“Immediately arranging while our minds are still fresh with inspiration from the flower’s source is a treat,” says Sarah Windward, a floral designer in attendance from Salt Lake City. “Ariella’s arrangements look as if they grow out of the vase,” adds Erin Benzakein, another floral designer in the group, who traveled from Seattle for the floral immersion experience. Though the class attracts many professionals—a testament to Ariella’s appeal—the designer assures that “the only prerequisite is a love of flowers.” 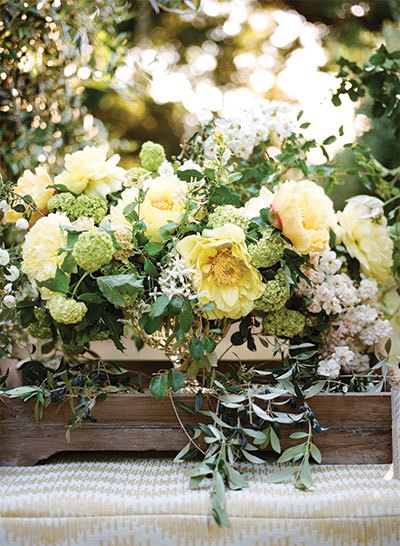 A romantic mix of clematis, garden roses, and olive branches captures the garden-inspired theme of the workshop.

The coursework calls for creating three styles of arrangements—large and small compote centerpieces, branch and vine arrangements, and bridal bouquets—as well as designing an outdoor party. With the women looking on, the hands-on lesson in compotes begins as the teacher effortlessly demonstrates an arrangement reminiscent of those in her 2002 best-selling book Flowers for the Table (Chronicle Books), which carved out her place on the floral scene. “She lets the flowers guide her, yet she also has a way of manipulating them, while still making it look completely effortless,” says Sarah.

Gliding as gracefully as her signature cascading bouquets, Ariella generously offers her pupils a tweak here and an encouraging word there. Going further, she reveals her tricks to tasks like tying ribbon: “There’s not a bow; there’s a loop and the loops are stapled together.” When talk turns to fashioning bridal bouquets: “Everyone is always surprised at how short I cut the stems of ‘Eden’ roses.” With the compote lesson, she offers a tip for avoiding the pitfalls of “roundy moundy” arrangements: “I cut a lot of flowers low and sink them deep, which has a dual function—to me it’s more visually interesting and you use fewer flowers. If the arrangement is on a higher plane, then you need a million flowers to fill the compote.” The class hangs on to her every word, for Ariella is the embodiment of artistry and passion.

Just as the afternoon sun bears down on the old barn, Chalk Hill estate owner and hostess Kaye Heafey announces lunch, a pretty affair always staged in a different corner of the property. “I love the idea of being in a beautiful place and layering that with a sensual learning opportunity,” says Ariella.

Left: Tables strewn with rolls of ribbon and buckets of flowers await workshop participants. | Right: Erin Benzakein works on creating a pleasing cascade for an arrangement.

It’s this inherent leafy abundance found at Chalk Hill that drew Ariella back to Northern California. Although her career began in New York City, working under legendary floral and event designer Robert Isabell, Ariella’s aesthetic was truly cultivated after moving to San Francisco on a lark. “The look in New York in the ’90s was still very contained. I lived in Berkeley and discovered that what everyone had to work with was much wilder—vines, pomegranates, figs, olive branches—and that drew me immediately.” Now Ariella practices her brand of undulating beauty from her shop in Manhattan’s Tudor City, and Zonneveld Farm, her new flower farm in upstate New York—that is, when she’s not conducting workshops in romantic locales from California to Paris.

As the sun settles between the hills, the now close-knit group gathers in the olive orchard to take the collaborative final: a seat at a dinner party they’ve styled with earthy linens, personalized place settings, and plenty of celebration roses. Of course, the evening isn’t complete without a toast to Ariella, the beauty of Chalk Hill, and their own blossoming work.