The Magic of Madoo

The small exuberant garden of artist Robert Dash tucked away in Sagaponack, New York, celebrates its 50th anniversary this summer. Designer and author Charlotte Moss shares her fondness for the artist and for his living masterpiece

Years ago, when I purchased Notes from Madoo: Making a Garden in the Hamptons, Robert Dash’s collection of essays on gardening, it was as if we were having a conversation, except that Bob (as he was called) was doing all the talking. Affable yet often quite recalcitrant, Bob was one of the most notable raconteurs on the Eastern Fork of Long Island. His storytelling ran from local lore to essays on plume poppies, manuring, late summer skies, and Eden. When I got to know Bob, I realized his gifts were many and all self-taught. What he learned through teaching himself to paint extended to his garden, Madoo, Old Scot for “My Dove.”

Bob’s love of reading and music was cultivated as a child and then further nurtured by his friendships with poets like James Schuyler, Frank O’Hara, Barbara Guest, and Jon Ashbery. As Eastern Long Island was home to Abstract Expressionism, Bob also became friends with Fairfield Porter and Willem de Kooning, among others. In New Mexico, he met Georgia O’Keeffe, and on the garden front he befriended Rosemary Verey, a high priestess of English gardening.

All of these relationships, combined with his voracious reading of the 1,000 titles in his library and his own “never say die” persona, helped shape the soil that would become Madoo. With the eye of a great colorist, Bob painted garden gates bright green and a Chinese pavilion violet. In a garden with an abundance of greens, these bold surprises make you smile and acknowledge that gardening, while backbreaking work, should be a joyous endeavor. Further, Bob felt that blooms were often an “afterthought . . . an impertinence.”

Taking on the responsibility for growing things and inviting people in as Bob did is an act of courage and great faith. He wrote, “All good garden paths should lead to loitering with fine intent,” and one is compelled to do just that at Madoo over paths made of everything from the expected brick and pebbles to discs cut from telephone poles.

What one sees in the 2 acres of Madoo is a garden with a personality unaware of its boundaries. Bob felt that gardens and paintings alike become “the property of the viewer—what he sees is tempered by what he comes with.”

In visiting gardens around the world, I do my prep work to under­stand the history and what to expect horticulturally. But no book, no garden guide can ever prepare you for the “perfume of the soil,” as Rich­ardson Wright called it, the smell of the air, and how the sky partners with the trees. A rose walk, a rill in homage to the Alhambra, a knot garden, and Bob’s signature ginkgo grove under­ planted with boxwood balls are a few of the things you can expect to see at Madoo. In a small garden, it is a chal­lenge to create spaces that lure you from one to the other as they reveal themselves to you, that tease you to the next but never rush. A leisurely amble is prescribed with a dose or two of sitting in one of the many seats or benches prepared for your visit.

Madoo was an artist’s home, and that is what you will also see. A sum­mer house circa 1740 and a winter house circa 1850 were structures that Bob called home, and he alternated inhabiting them with the seasons. When you see the saturated colors of his rooms, you understand the colors in the garden. When you see his collections, his carefree decorating style, the garden takes on a deeper meaning. The man, the artist, and the gardener are reflected in every square inch, an autobiography in the soil. Bob painted only in the winter because the garden was his summer canvas. He would be the first to tell you, if he happened to corner you while you were visiting, that a garden cannot be a museum. Bob, who died in 2013 at age 82, believed in change, and in his own words he made a plea to the custodians and curators for the future that a garden is “not to be set in amber.”

The spirit of the place, imbued with his gardening soul, beseeches to this day to “be bold at times” and to re­ mind us that “it is a generous garden. It is a risk­taking garden. Without innovation, the garden will stale: It has to be young and fresh.” Nestled in a corner off Sagg Main Street in Sagaponack, this small garden brim­ming with personality, mystery, and exuberance awaits your visit. 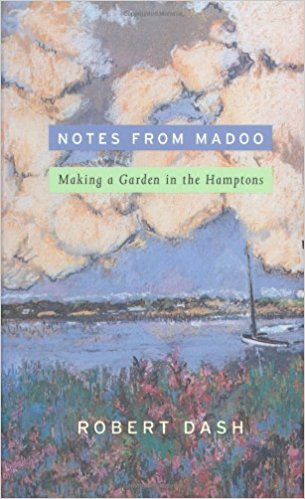 Plan a visit at Madoo.org. Don’t miss Charlotte Moss’s guide to The Best of the Hamptons.

And read Robert Dash’s Notes from Madoo: Making a Garden in the Hamptons.