John Loecke and Jason Oliver Nixon, the duo behind the design and lifestyle brand Madcap Cottage, throw a casual summer party at home

On a steamy Saturday in High Point, North Carolina, the air feels just right for stirring up a late-afternoon summer storm, the kind that locals welcome for the relief it gives from the heat and the revival it brings to lawns wilted from too much sun and too little water. Welcome, that is, until Mother Nature becomes an unruly guest who crashes a party, like the one that John Loecke and Jason Oliver Nixon, the masterminds behind the design and lifestyle brand Madcap Cottage, have planned in their garden today.

Visions of friends strolling their almost three-acre property with highballs and hors d’oeuvres in hand will have to wait for another time. The men, always quick on their feet, shift gears and move the festivities inside their 1930s-era Regency Revival home, which they’ve dubbed The House of Bedlam.

While Loecke makes a few last-minute floral arrangements from an armful of zinnias he brought in just before the rain, Nixon mixes pitchers of refreshing libations and turns up a little Blossom Dearie on the sound system. As friends start to wander in—it’s a casual, come-and-go sort of affair—the party begins.

A garden of delights of the interior variety awaits exploration in rooms that seem transported out of an eccentric English country manor, with a riotous fusion of color, florals, geometrics, and textures enveloping almost every surface, be it the tented ceiling, chintz sofa, or decorative mural. With a name like House of Bedlam, one certainly wishes the walls could join in the lively conversation already underway.

And in a sense they do, speaking of Loecke and Nixon’s passion for vintage prints purchased on eBay, historical design references gleaned from treks around the globe, and their pack of rescue dogs named Weenie, Jasper, Amy Petunia, and Cecil, who scamper underfoot and whose likenesses playfully appear in the custom chinoiserie wallpaper in the living room. Eclectic art and antiques picked up at markets and auctions mingle with collections amassed along the way—layers that seem to belie the fact that the couple has been here only a few years.

“We like a house to have a sense of personal history and look as if it has evolved over time. Good decoration always provides clues as to who lives there.”—John Loecke

After two decades in New York, where Loecke and Nixon became serial movers, renovators, and decorators (including a historic schoolhouse in the Catskills that inspired the brand’s moniker), these former magazine editors turned interior designers looked south in search of a less-frenzied, hospitable place where they could focus on expanding their business in new ways. They had both attended many a High Point furniture market, and the city’s cadre of craftspeople and makers, as well as its laid-back sensibility, proved alluring.

After a lightning-fast weekend spent with a real estate agent, they found the place where they could put down some permanent roots. “We’re probably not the neighbors who can lend you a cup of sugar, but we always have a cup of bourbon on hand,” says Nixon, with a laugh.

“When we entertain, nothing is sacred, nothing is fussy, and it’s a mix of high and low. Nobody wants to be in an ivory tower where they fear they’ll be banished if they spill something.” — Jason Oliver Nixon

Now, the house serves as a calling card come to life and a laboratory for all that the Madcap Cottage brand embodies: an intrepid joie de vivre; a skillful blend of high style with down-to-earth accessibility (much of the furniture, fabrics, and accessories that Loecke and Nixon design can be found through retail rather than trade-only showrooms), and a sense that nothing about life or decorating should be taken too seriously.

Case in point: their new collection of hand-hooked rugs for Momeni includes a selection of Madcap-worthy bon mots such as “Children are wonderful, but dogs don’t have to go to college.”

“We’re all about the idea of fun, spirit, and whimsy. Bring the adventure home, and leave your cares at the front door,” says Nixon.

Come rain or come shine, that perfectly sums up their philosophy, whether it’s in the way they entertain the friends they gather today, or in the products they design for the rest of us. It’s a Madcap Cottage world, and Loecke and Nixon hope we’ll all soon be living in it.

14 More Scenes from the Party 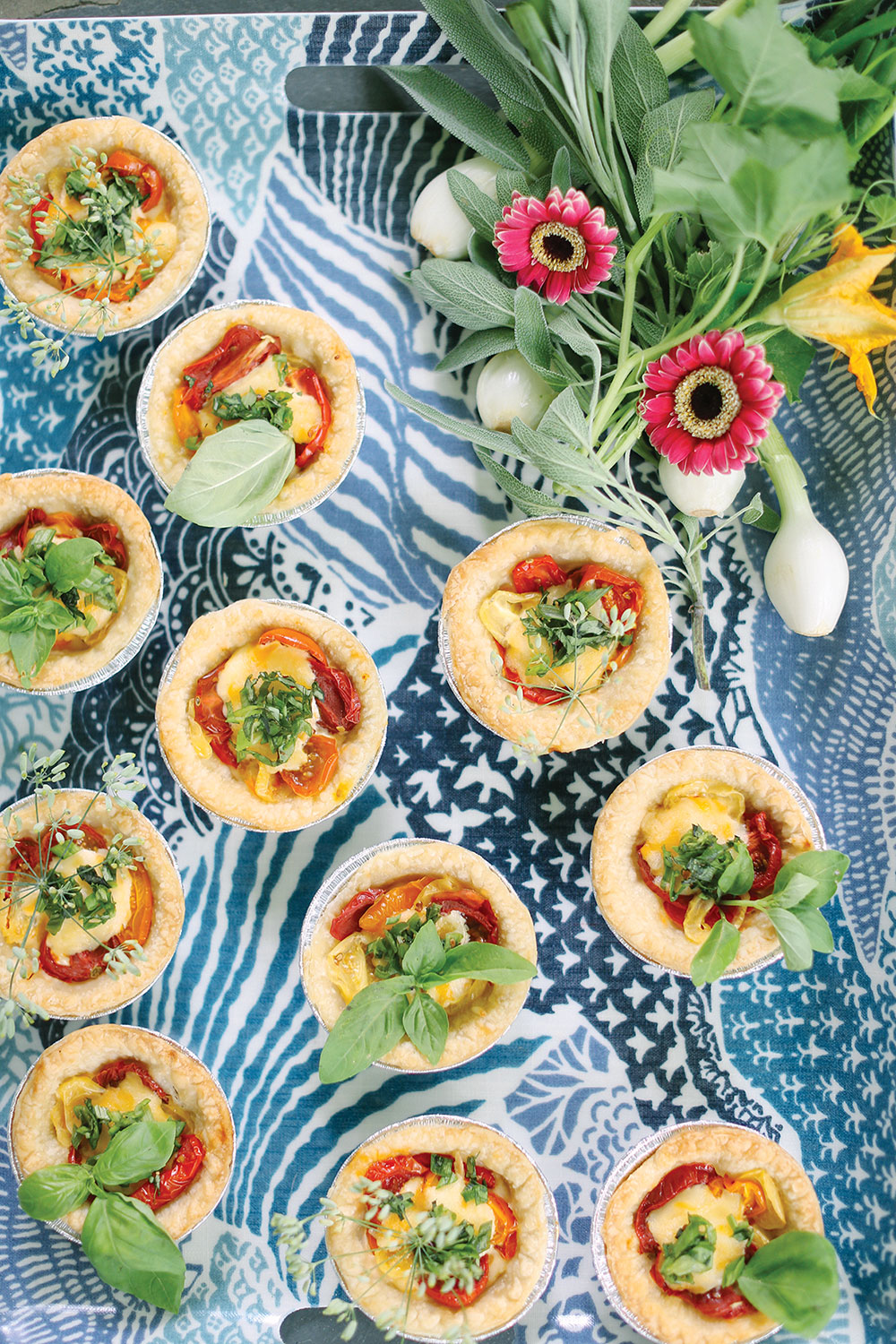 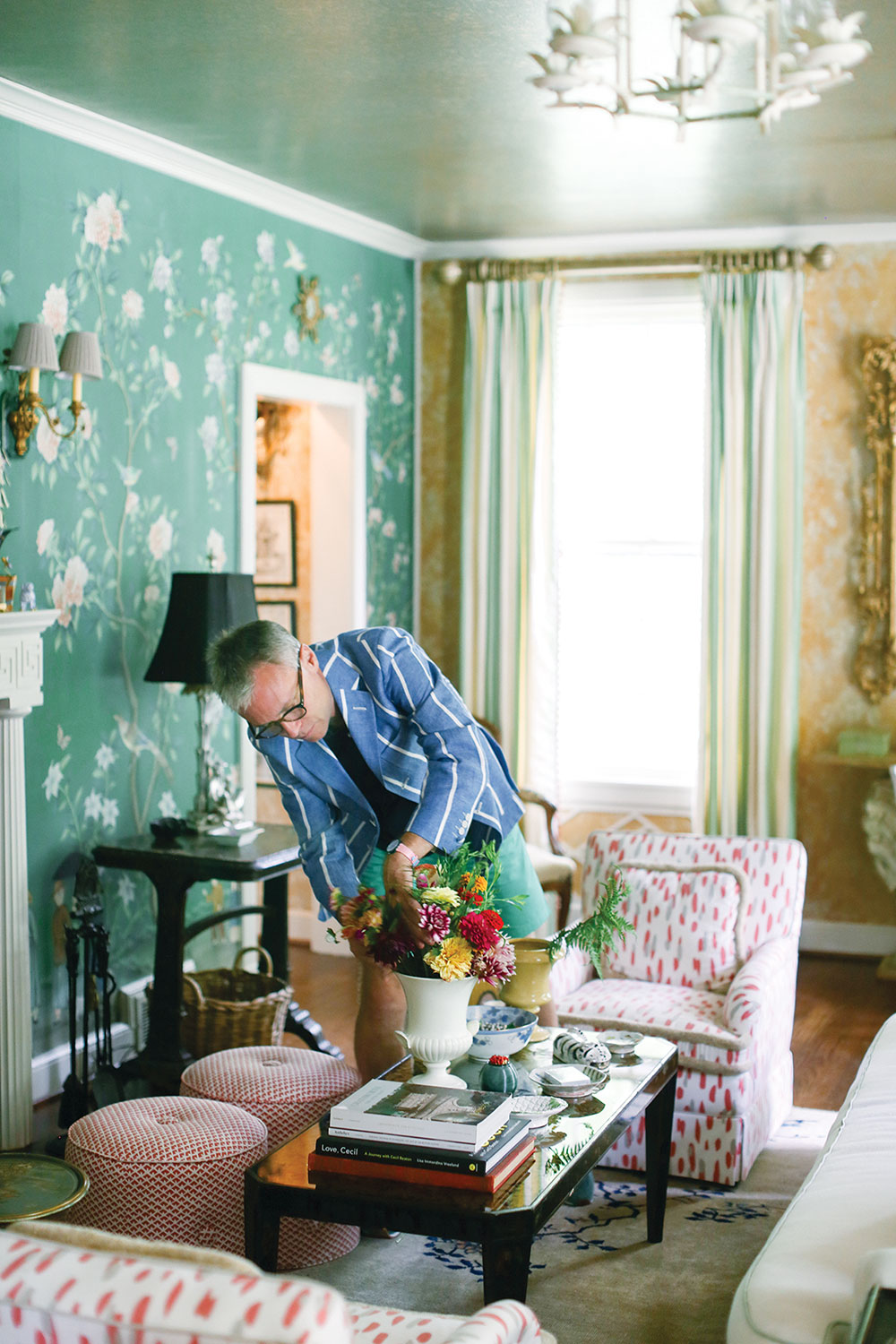 Loecke tweaks a floral arrangement in the living room. 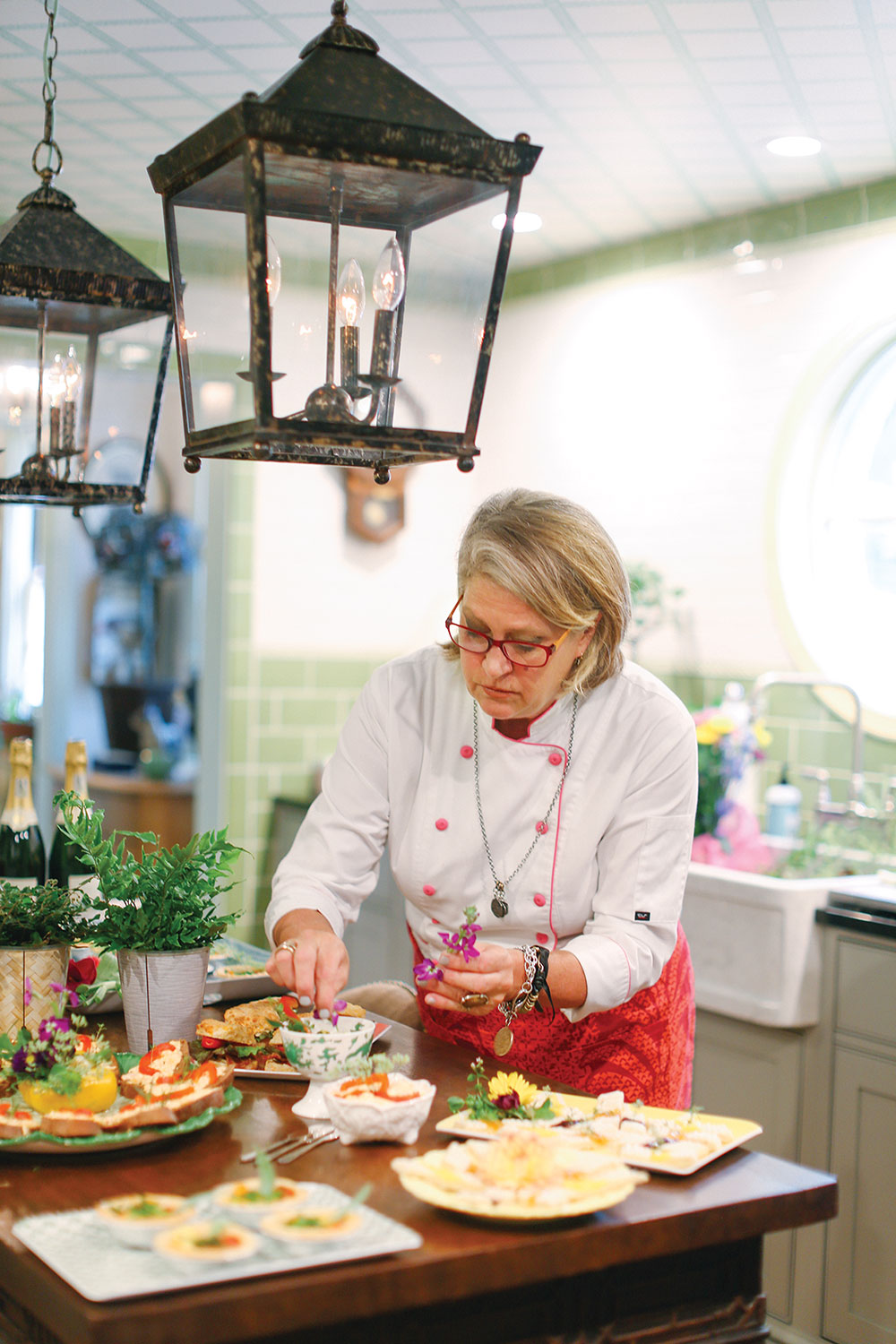 Friend and caterer Anna Everidge Thrower brings her own magic to the event, creating fare that is colorful, eye-catching, and tasty, like the zucchini roll-ups with goat cheese. 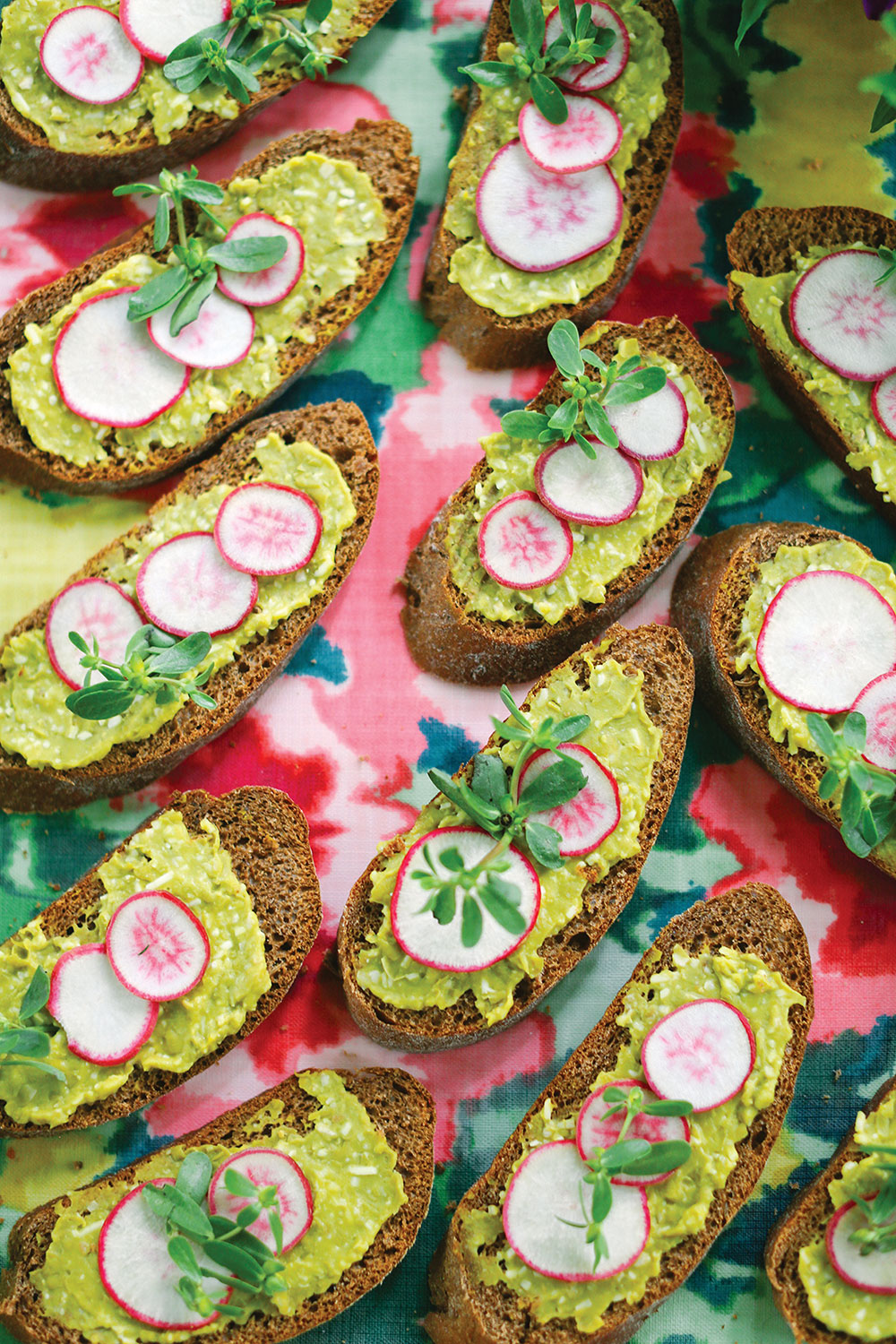 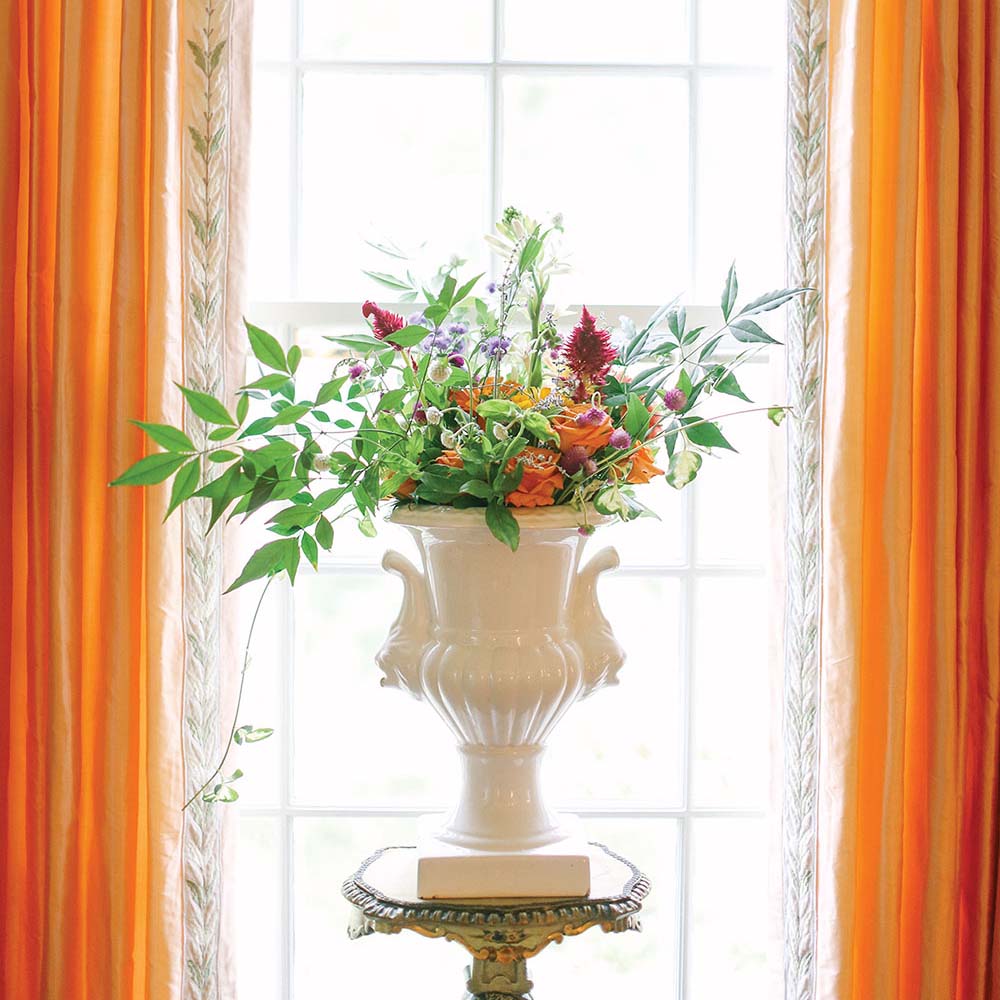 A flower-filled urn on a plant stand between bright orange curtain panels make a sunny scene. 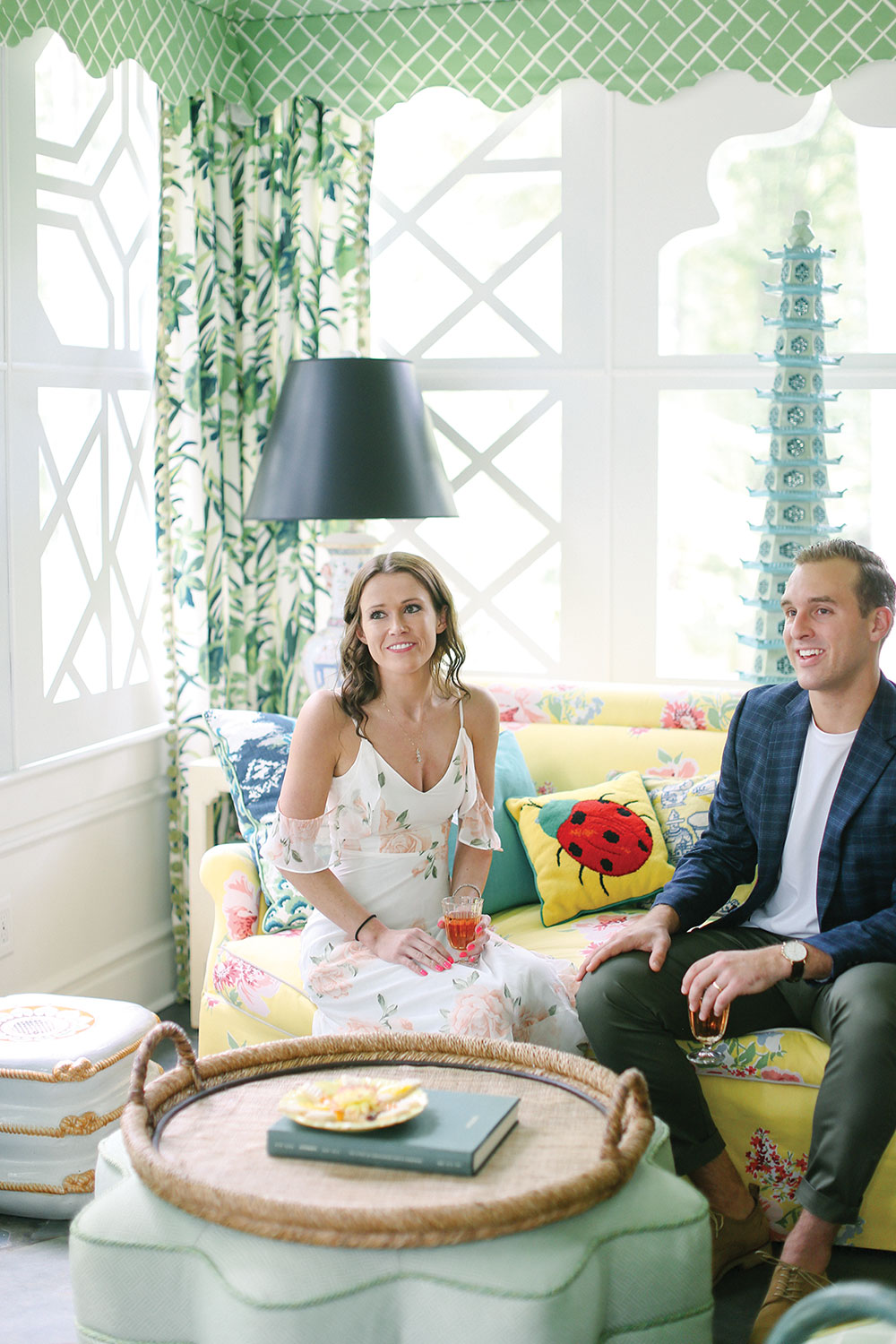 Guests drop in for a visit during this casual come-and-go affair. 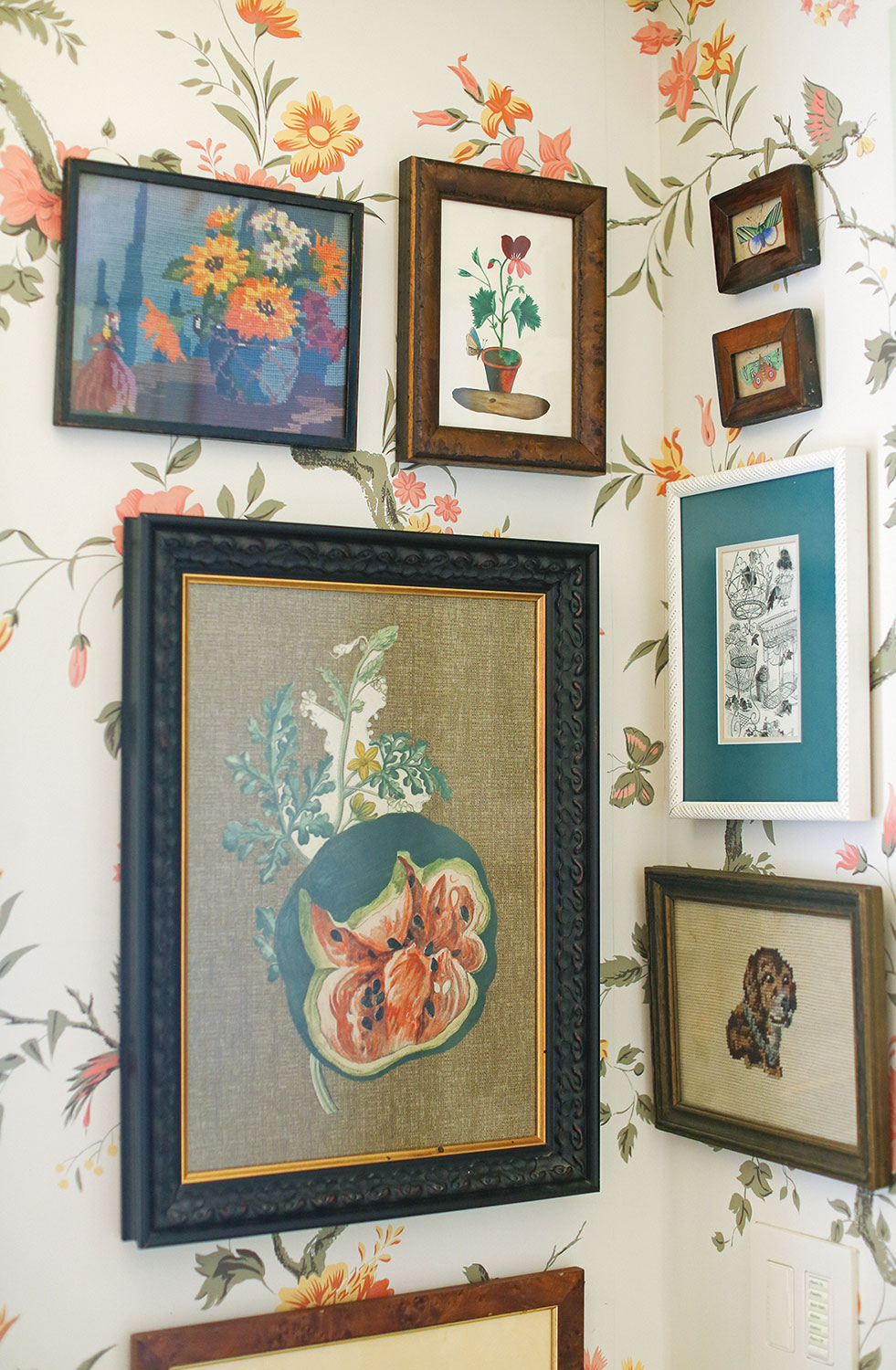 A collection of framed vintage art gives the look of a home that has evolved over time. 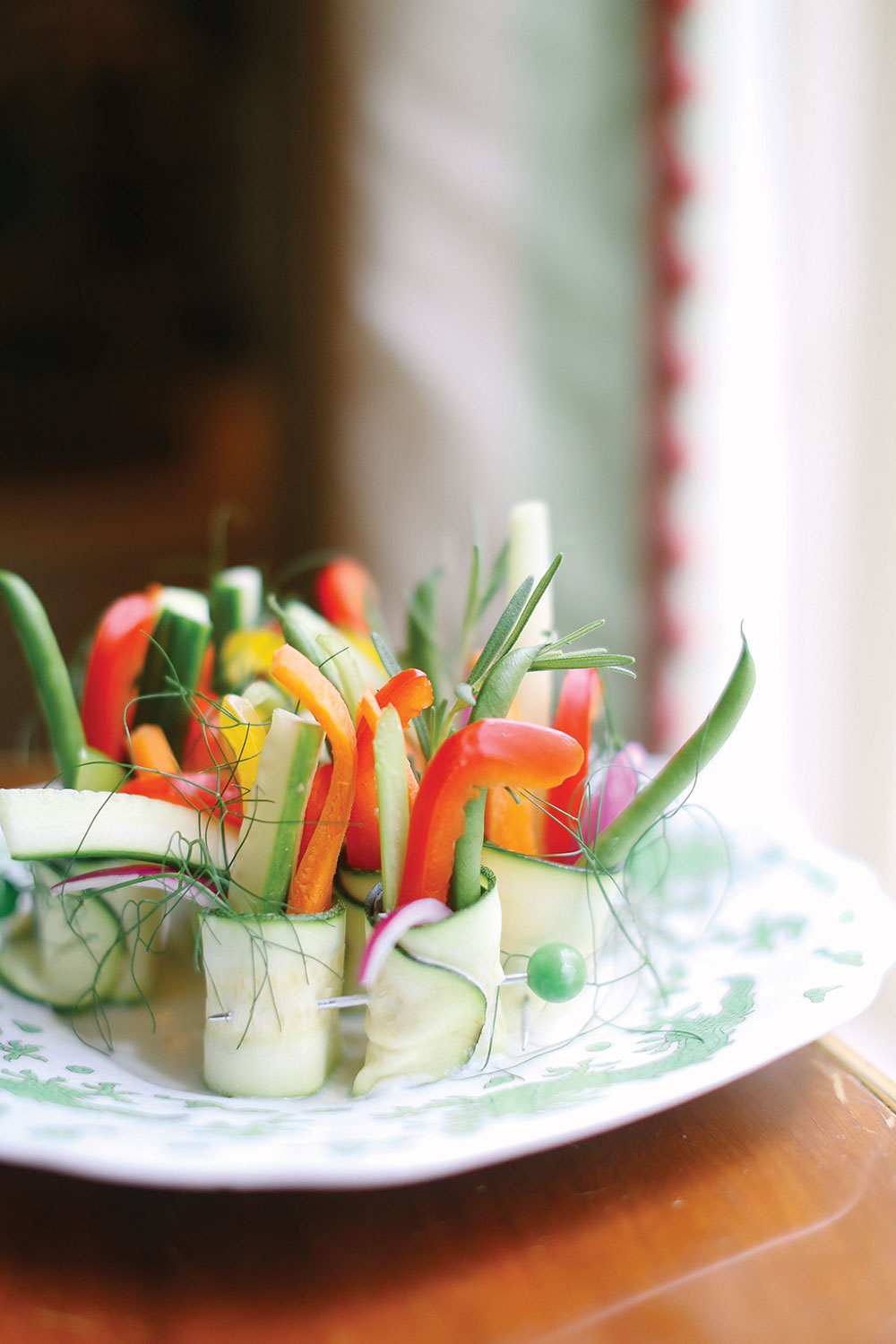 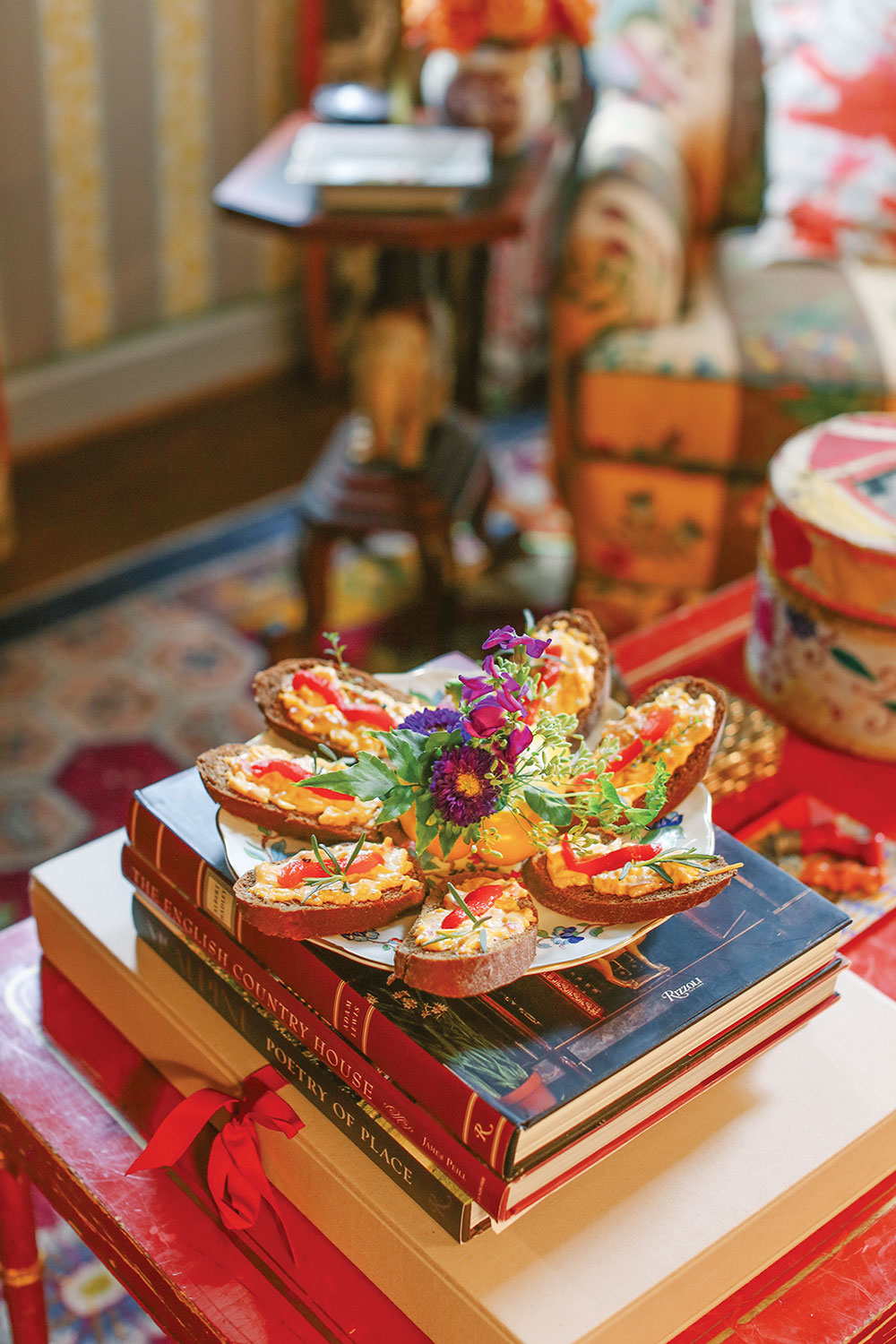 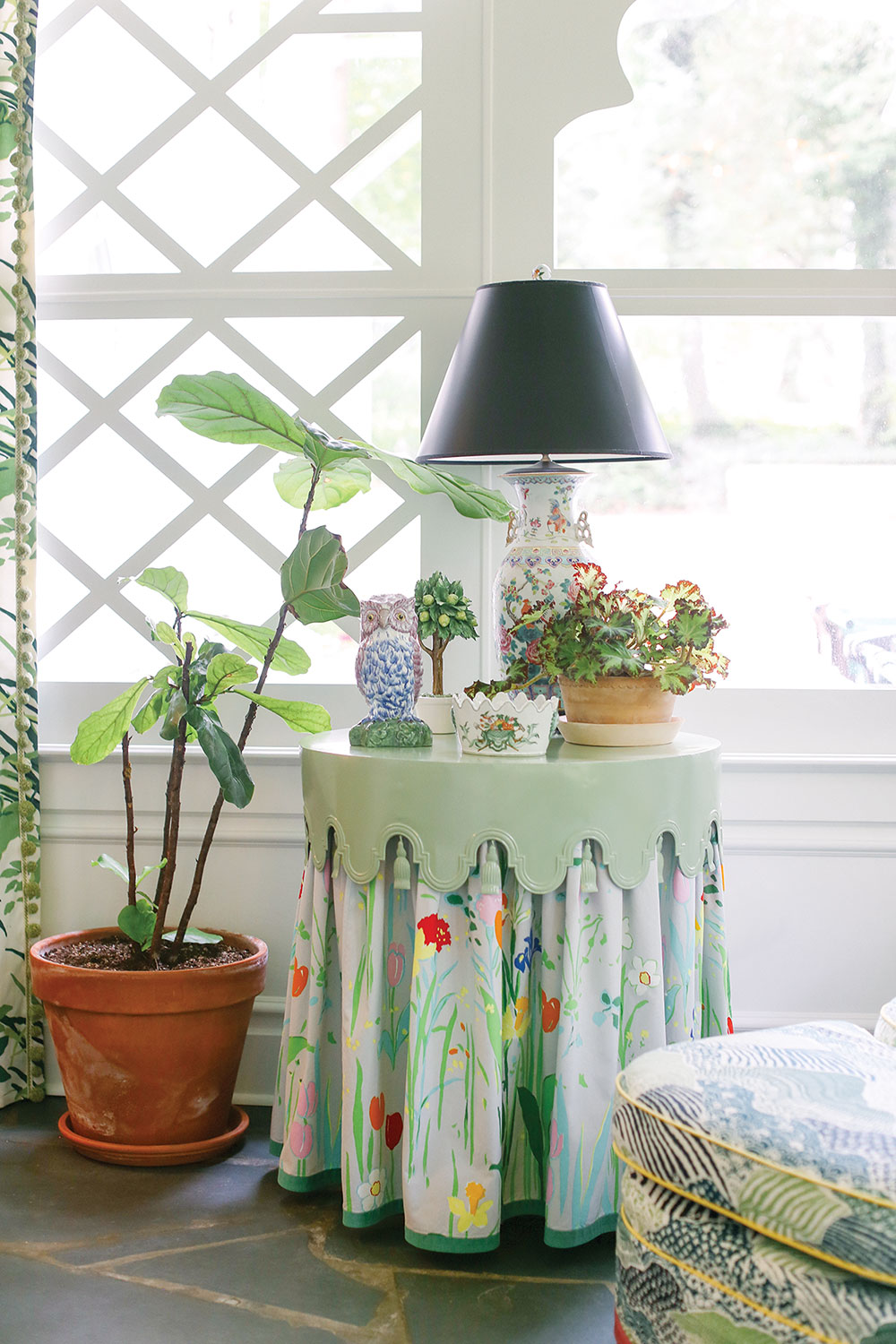 The weather outside may be gray, but indoors every room is abloom with botanically inspired patterns, many designed by the homeowners themselves, including fabrics for Robert Allen in the sunroom. 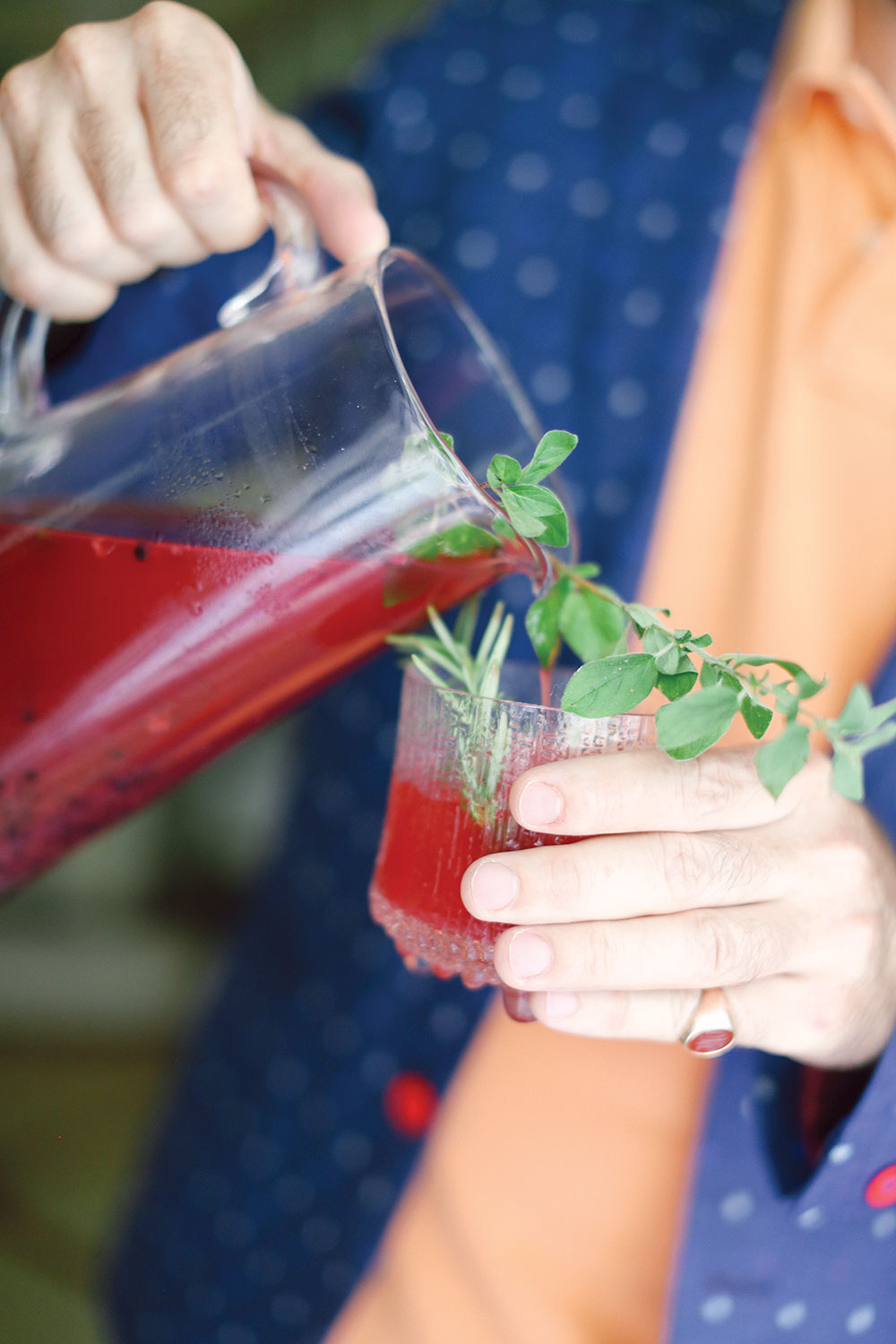 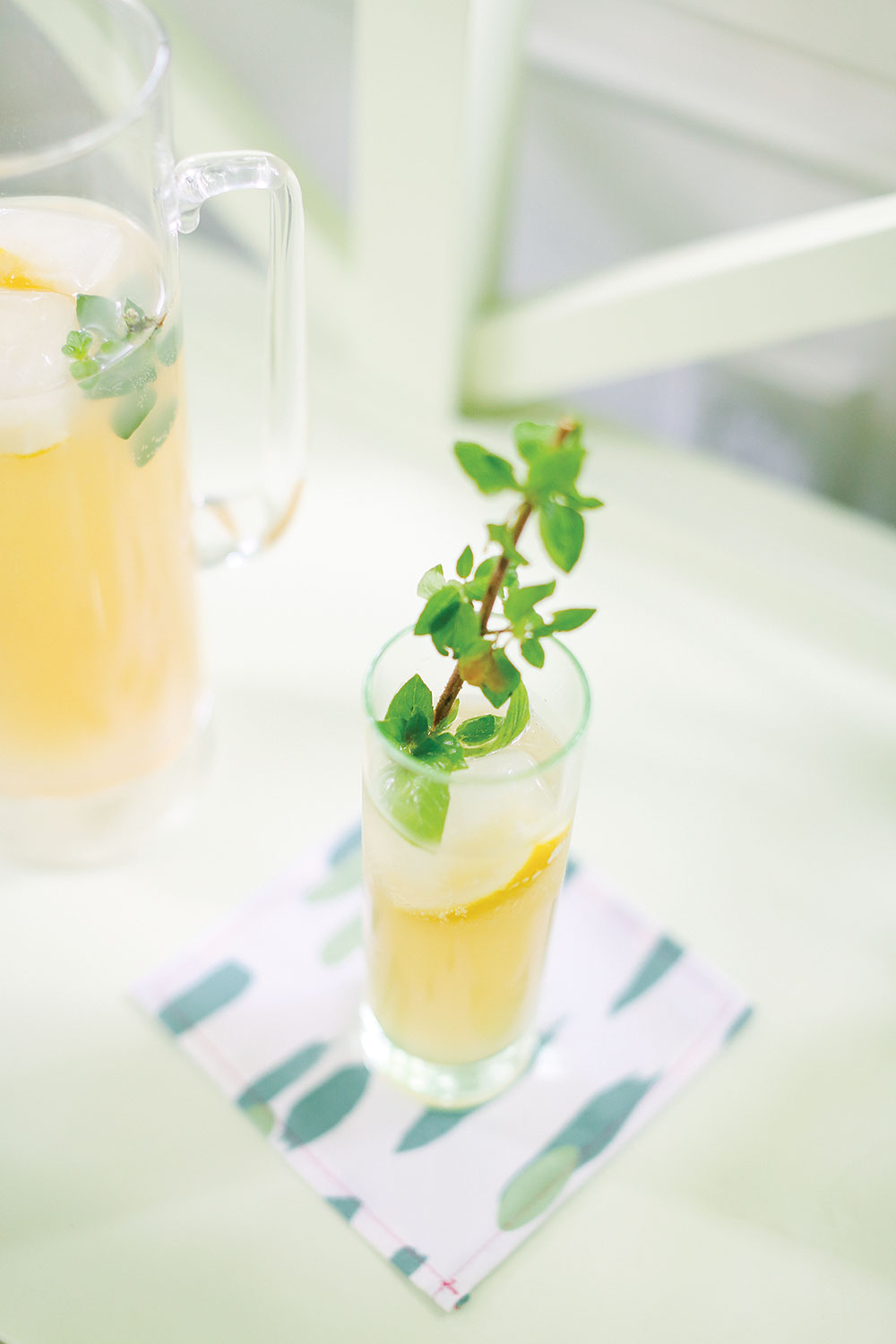 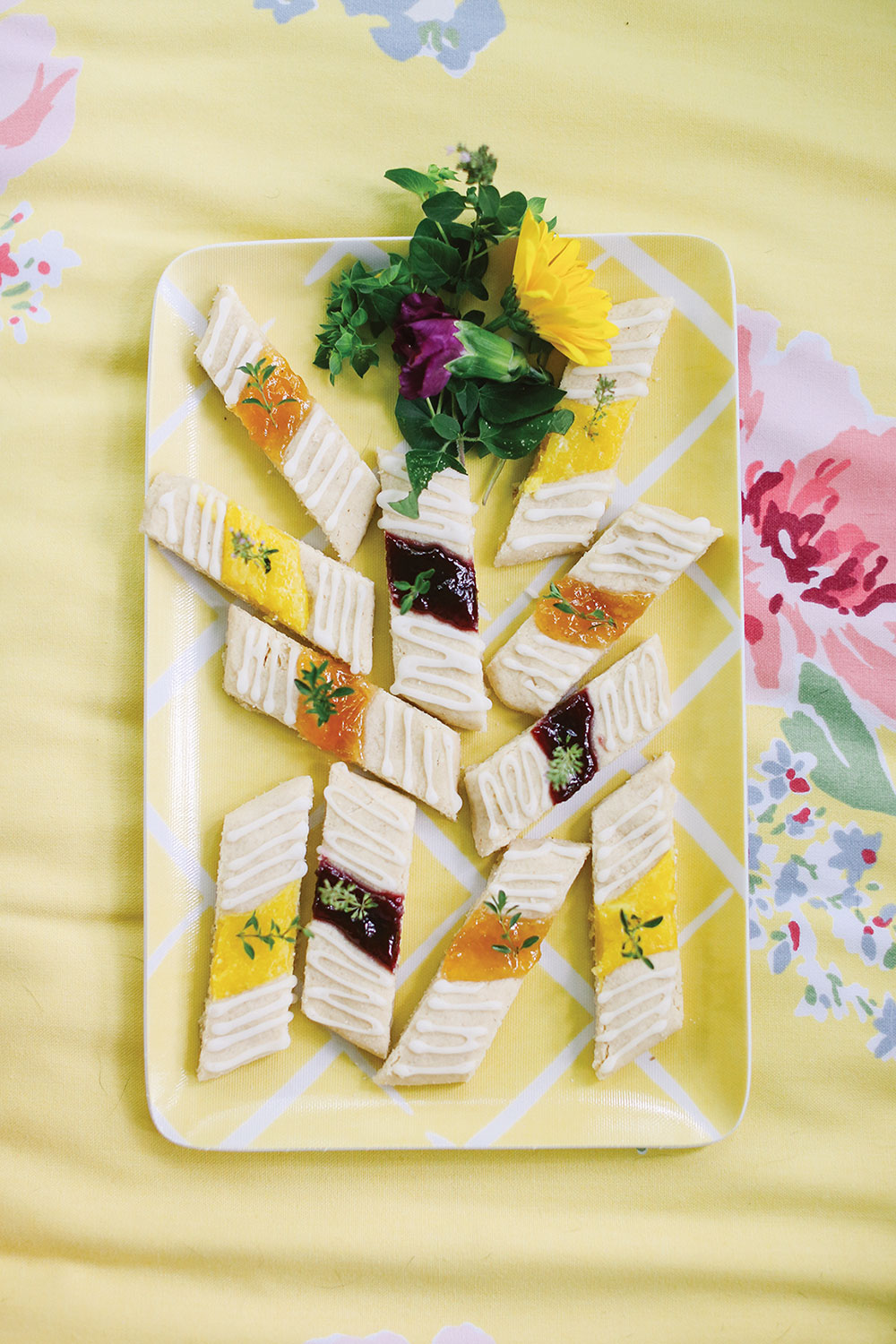 A taste of something sweet: ribbon shortbread 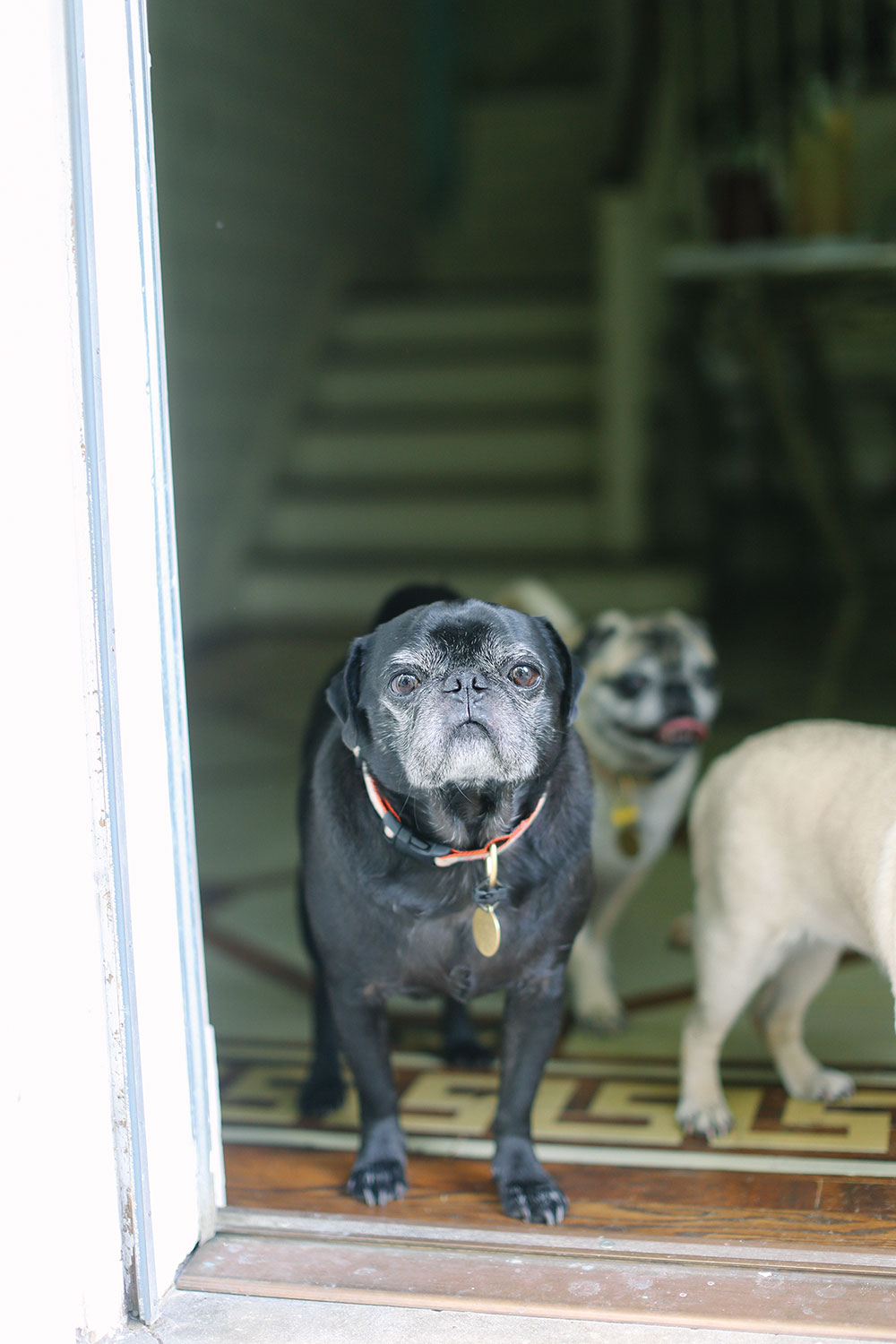 Pound-rescue pups reign supreme in this house, along with prints and patterns.

Planning a party of your own? Check out seven party planning tips from Nixon and Loecke.