I’ve always been an avid reader, particularly of nonfiction,” says Kinsey Marable, as he pulls out a biography of Vita Sackville-West in his library. “I’m especially interested in anything related to decorative and social history—the way that people live.” But for this Charlottesville, Virginia–based aesthete, books are more than just a leisurely pursuit or passion. They’re also his thriving business. Marable puts together book collections for a host of well-heeled clients, from Oprah to Donna Karan, and consults with many a top designer to help stock the shelves of the grand houses they’re decorating (the late, great Mark Hampton was the first to enlist him to assemble an entire library for one of his projects). But these are no mere “books by the yard,” a concept Marable eschews. “I’m providing people with an actual private library, one that they can return to again and again and really be drawn in to subjects that will captivate them,” he says. Marable keeps meticulous and running lists of books he’s found on subjects that range from interiors and gardening to food and memoirs. Almost all are out-of-print or obscure, with a heavy slant toward volumes that have been published abroad. The self-proclaimed Anglophile (“and Francophile and Italophile too,” he says with a laugh) believes in learning and soaking up inspiration from the masters, particularly when it comes to gardening. “So many of our American gardens take their cues from the English as well as the French for the simple reason that they have influenced our tastes since colonial days,” he explains. When we asked Marable to name a few titles that should be found in any garden aficionado’s library, he could have, as they say, written a book.

The Financial Times garden columnist leads a season-by-season tour of gardens from the likes of Christopher Lloyd and Nancy Lancaster.

Madison Cox, American garden designer extraordinaire, shares his favorite courtyards, terraces, and patio gardens in one of his favorite cities.

When you want to break from digging in your own garden to read a little fiction, the main character of this novel, Bert Pinnegar, keeper of the local manor’s garden for 80 years, spills all the quirks and quandaries that come with the turf.

Originally published in 1991, this book features breathtaking photographs of the still-intact work of Russell Page, whom I consider the preeminent garden designer of the 20th century.

I was captivated by this biography of Vita Sackville-West, the creator of Sissinghurst, one of the finest, as well as most relatable and friendliest gardens in all of England.

English garden designer Penelope Hobhouse has worked and lectured extensively in the United States. Her gardens burst forth from their borders like ocean waves.

Down the Garden Path by Beverley Nichols (TIMBER PRESS, 2005)

This is a charming, oftentimes hilarious memoir of Beverley Nichols’ country garden and cottage, with illustrations by Rex Whistler. If you can find the original, published in 1932, grab it—it’s a collector’s item.

The Garden in Winter by Rosemary Verey (FRANCES LINCOLN, 1988)

We tend not to think too much about gardens this time of year, but thankfully Rosemary Verey did, and she gives advice on how to plan a space so it’s at its best when little is blooming.

Making of a Garden by Rosemary Verey (FRANCES LINCOLN, 1995)

Another of the English garden doyenne’s helpful and beautiful tomes

Both these books will always be in my library—and should be in yours, whether you want to learn more about why these styles influence American gardens or just want to armchair travel.

We get a rare look into some of the most individual and wonderful gardens in England owned by 33 well-known gentlemen, who each write personal essays.

Famous for his interior decoration, David Hicks also designed gardens. He is strict about symmetry, using mostly boxwood and hornbeam—right up my alley.

Many of our most admired plants were gathered in Asia in the 19th century by intrepid plant hunters. This is a wonderful, historical novel about those pursuits, and it’s one of my favorite books of the last five years. 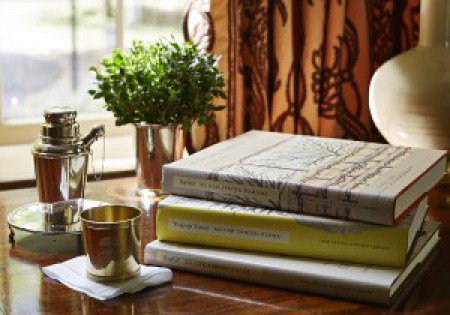 This collection of three volumes catalogs many of the finest and rarest garden books ever published that are housed in the extraordinary library the late Mrs. Paul Mellon built at Oak Spring Farm in Virginia. The set shown below is personally inscribed by Bunny Mellon.