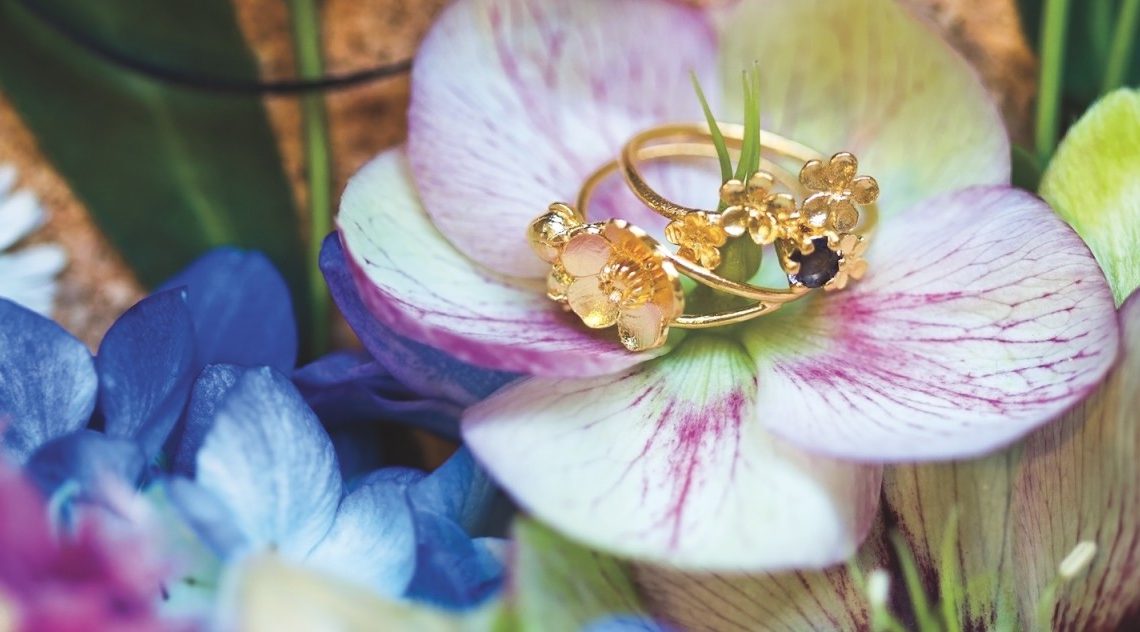 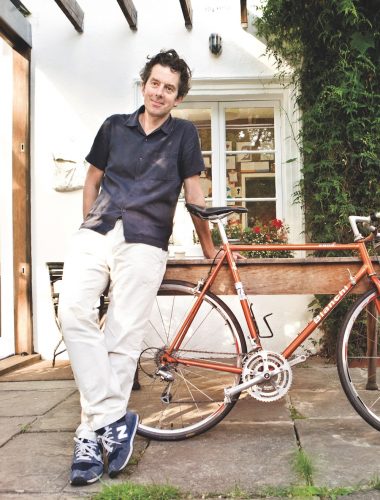 “If I weren’t a jeweler, I’d be a bicycle maker or perhaps a small farmer, growing rose hips or something,” says British designer Alex Monroe. “Or maybe an architect or boat builder.” If that seems like quite an expansive range of potential careers for this artist, who crafts feminine and fanciful jewelry in his London workshop, it’s one that begins to make sense the more he explains his childhood in the English countryside of Suffolk, and his early creative endeavors.

Monroe and his siblings were often left to their own devices, which included melting the lead out of old piano keys and transforming it, through a very elaborate process, into counterfeit fifty-pence pieces that could fool a cigarette machine. They then used the cigarettes to bribe the dustbin men into dropping of odds and ends needed for various projects. “My parents took little interest in us kids, so we grew up quite wild. I used to make everything for myself—bows and arrows, shotguns, bicycles, go-carts, motor- bikes, and the like,” says Monroe. He also became a keen observer of nature and developed a love of gardening, and by the end of primary school he was in charge of his family’s greenhouse. “I became quickly caught up in the magic of making things grow,” he says. 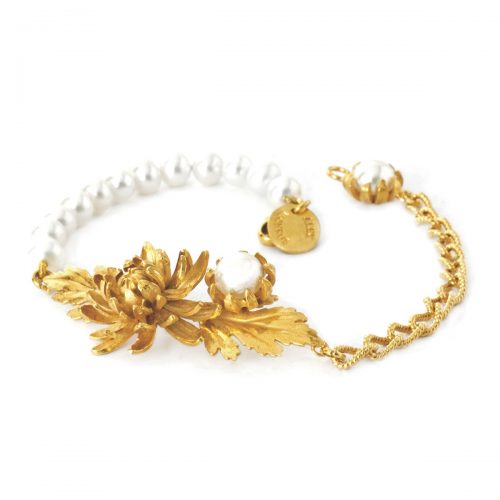 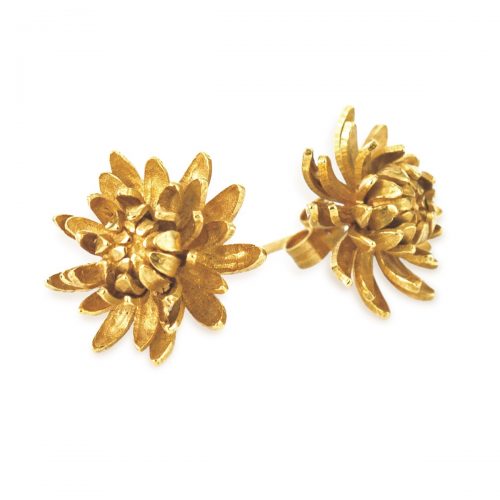 Alex Monroe has had a knack for making things since childhood, and eventually found a natural calling designing jewelry, such as this bracelet and earrings from the Chrysanthemum collection.

While studying at the Sir John Cass Faculty of Art, Architecture and Design in London in the early 1980s, Monroe was initially attracted to fashion. He appeared on the London scene when punks were fading and the new romantics were blossoming. He soaked in street style, and made some of his frst sartorial purchases from Vivienne Westwood. “I loved art school so much,” says Monroe. “I tried everything from printmaking to textiles to sculpture, and I loved them all. But I especially liked fashion. When I applied to specialize in fashion, I didn’t get a place at university, so jewelry was my second choice. Lucky for me, I love it.”

When marveling at a chrysanthemum petal on one of Monroe’s necklaces or a butterfly alit atop a ring, it’s rather hard to believe that jewelry making was ever second choice. Monroe and the other artists employed in his studio create every piece by hand, using traditional processes. He works sketches directly into silver instead of wax, which gives the high level of subtle detail and texture that are the hallmarks of his style. 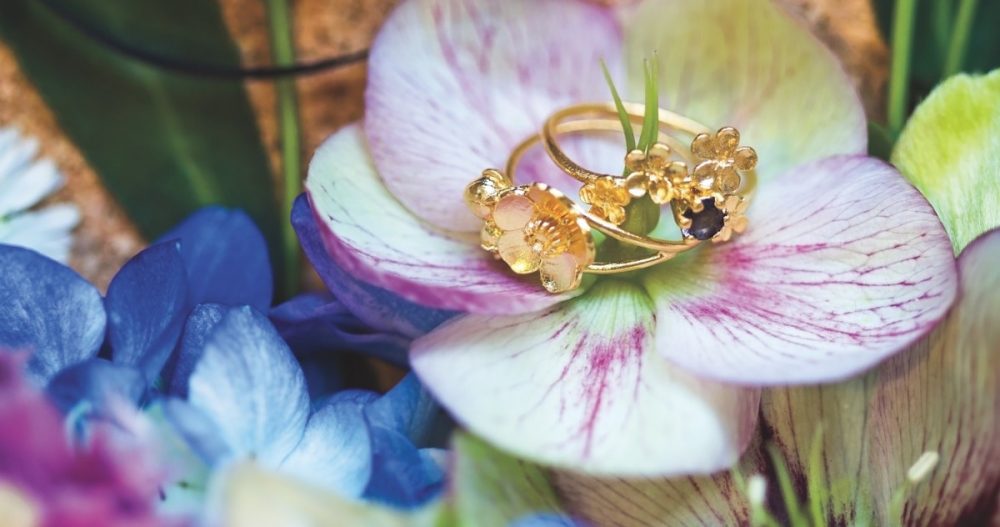 Monroe has a particular fondness for British wildfowers. Forget-me-nots and buttercups make appearances in these rings from the Floral Fayre collection.

Though his designs are now known for their delicacy, that wasn’t always the case. “When I first started in 1986, some of my pieces were as big as dinner plates! But it didn’t take long for me to find my voice, and I soon settled down into making the pretty, feminine, quirky-but-very-wearable pieces for which I’m known today,” he says. It is hard for him to pinpoint his favorite motifs, but he admits a love of British wildflowers including daisies, buttercups, forget-me-nots, bluebells, and hedgerow roses. “I also use grasses and all sorts of leaves. The list is endless.”

Today, every jewelry collection starts with sketches. “I sketch like mad,” says Monroe, as he pulls out one of the numerous volumes in his workshop that he has crammed with drawings, notes, and bits of plants he has picked up along the way. “Then I move on to the workbench, where I’m still sketching, but in metal. You can’t really draw the curve of a petal or the shininess of a bead of water on paper. You have to actually make it.” 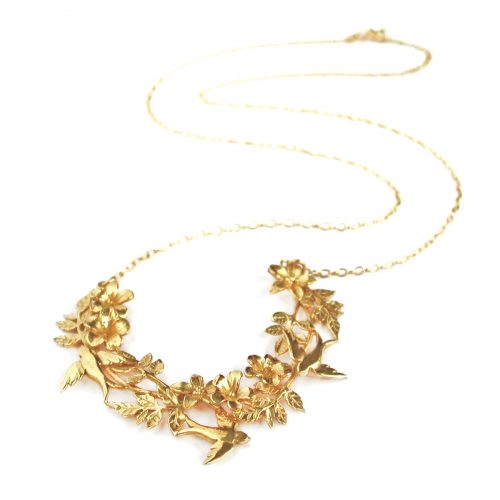 Swallows flutter amidst a meadow of leaves and flowers in Alex Monroe’s Calabria Crescent necklace. 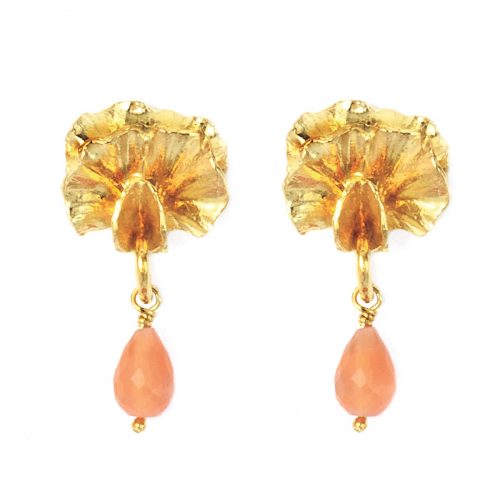 While nature frequently inspires Monroe, he also craves a strong narrative to pull his collections together before he begins rendering his delicate designs in precious metals and stones. “I prefer ideas that have a context,” he says. There’s the Daisy Bell collection with its genesis in the old song that begins, “Daisy, Daisy give me your answer true.” Monroe imagines young lovers biking through the countryside on their way to a romantic picnic, so naturally the jewelry grouping includes flowers, a tandem bike, and a honeybee.

One collection based on the ideas of original sin and temptation is inspired in part by Lucas Cranach’s paintings Adam and Eve and Cupid Complaining to Venus and includes passion flowers, fruit, snakes, apple blossoms, and bees. Rare, however, is the story Monroe can conjure up that is more fascinating than his own very real and personal one, which he recently documented in a book titled Two Turtle Doves (Bloomsbury USA, 2014). “I wrote about the design process and wanted to bring the reader into the workshop and share my love of creating something,” he explains. “But as I talked about my childhood, the publishers got more and more interested in it and asked me to write more about that, so the book became half memoir and half description of making things.”

Monroe is constantly thinking about the next artistic chapter, and through collaborations he has brought his aesthetic to other areas of design. He’s done fabric for Liberty London, hardware for Anthropologie, and tea services for Fortnum & Mason. His creativity, which sprouted at an early age, seemingly knows no bounds. Thus Monroe continues to rattle of a list of professional possibilities: “Oh yes, I’d like to be an herbalist; I did enjoy writing my book, so perhaps an author; or a plant hunter. And I’d love to make wine in a vineyard in Tuscany. I think I need more time! 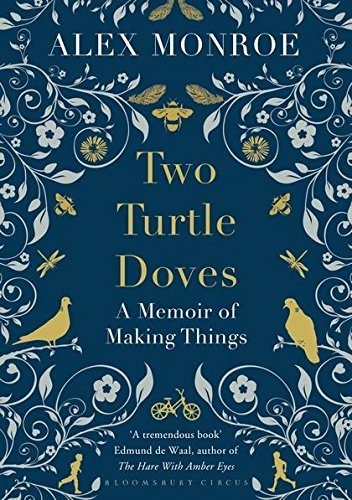