Samuel Johnson defined a tree—the first official English-language definition—as a large vegetable rising, with one woody stem, to a considerable height, a wholly inadequate description from an otherwise great writer. Is it because trees are so common that we don’t appreciate them? We cut them down, poison them, prune them ruthlessly around power lines, and carelessly introduce disease and destructive pests. But we also plant them when someone is born; we plant them when someone dies. We seem to want them to measure and commemorate our lives, even as the way we live hurts them.

If you walk out the front door of the house where I grew up in Ann Arbor, five strides down the front walk will bring you to the sidewalk. Turn left and you can walk down the block to a café that was a small grocery store called Food & Drug when I was young. On the way you’ll pass the childhood home of one of my best friends and the house where my piano teacher lived. Both sides of the street have a grassy sidewalk apron planted with maples, oaks, and hackberries that touched above the road when I was little. I wrote an essay about that walk to my piano teacher’s house, short in distance, just four houses down, but long in time—10 years, hundreds of lessons. I watched the maples, oaks, and hackberries moving against the evening sky and was filled with a sense of purpose.

My bedroom window looked over our small backyard, where there was a tall American elm. Looking up into its vaulted branches is one of my earliest memories. We moved into the house the summer I was four, and at some point when I was still very young, the tree had to be removed because of Dutch elm disease. The beetles were probably already killing the tree when we moved in. I remember the wood chips filling the grass for months afterward. We were always tracking the sawdust into the house.

With the elm gone, I could see across the length of our backyard. Just beyond the roof of the house behind ours was a row of trees lining a busy road. Every night until I left home for college, I stared at that canopy against the sky. Sometimes I was sure the peaks and valleys of that line somehow graphed the course of my life.

In the summer my family went to my grandmother’s house in Connecticut. Often I flew out ahead and had time with her before my parents arrived, and that time was spent going to the library, checking out a stack of books each, and stretching out on matching sofas in her living room, a floor fan angled to blow on both of us while we read. Through the windows I could see an old cedar. Cedars are ancient-looking even when they’re young and healthy, and this tree was dying. I believed the illness killing it descended from the air at night, but this can’t be right. My grandmother liked to tell me ghost stories.

Many years later, at Yale in New Haven, a town nicknamed the Elm City because of all the American elms that once grew there, I met someone who liked to walk beneath the trees when he was having trouble with a philosophy paper. Dickens and Twain both thought Hillhouse Avenue—shaded in the 19th century by mature elms—was the most beautiful street in the country. Most of the original elms were killed by Dutch elm disease, but young oaks thrived in their absence, and by the time the philosophy major and I arrived in New Haven, those oaks had matured. We walked and talked beneath them for four years.

After I graduated, my grandmother died and I was given two things: an amethyst ring and a potted ficus tree. It may seem odd to inherit a plant, but my grandmother was a gardener and if you’d seen her with her morning coffee, one hand turning the pages of a newspaper, the other stroking the drooping branches of the Norfolk pine she allowed to reach over her chair like a bower, you’d understand hers were not plants that could just be abandoned when she was gone. At the time, I was living in an apartment in New York City with no direct sunlight, but I vowed to do the best I could. That ficus lived with me in New York, Charlottesville, Washington, D.C., and eventually back in Charlottesville before I admitted failure. When I cut up its dry branches, I used the pieces to mulch my first garden and said a few quiet words to my grandmother.

In my late twenties I lived in London. My husband (the philosophy major) and I rented a small mews cottage that looked across a cobbled street, over a stone wall, and into the back garden of a larger house where an ash tree grew. I set up a desk in the window of the second floor bedroom, overlooking that garden. It felt very grand to have a room and time to write, but I had no idea what I was doing. I stared at the ash a lot. One day in a fit of procrastination I looked up some information about it. I learned the ash is one of the strongest hardwoods, able to absorb sudden shocks and strains without splintering, making it the preferred wood for the handles of hammers, axes, and chisels. I took this as a sign that I should persevere.

A few years later we lived in a town filled with crape myrtles. This tree was not one I’d known growing up in the Midwest, and I loved it from the start. I’d been working on a novel for several slow years when I suddenly told myself one late-winter day that I would have a draft done by the time the crape myrtles were in bloom. And I did. When I see crape myrtles now I remember the energy of that time, the feeling of racing toward a deadline that made sense only to me.

Now, in New York City, we live on the 6th floor, which is above the canopy line of most city trees. I like the apartment. I do not like living without dappled sunlight falling through the windows. We have a balcony, though, so I tried growing a crape myrtle out there. It didn’t thrive. Next I tried a yew, which stood up to the windy conditions, but also didn’t thrive. Now I’ve got a cyprus, but it’s only two feet tall.

The trees along the street where I grew up aren’t there anymore. Some reached the end of their natural lifespan, others were damaged or fell in storms. The city planted new ones in the apron, but they are still saplings. To me there is a terrifying amount of space above the houses now, and when I stand in front of my childhood home I feel lost and too large. But I watch a new crop of children playing across the yards and they don’t seem to mind at all. These are their trees. 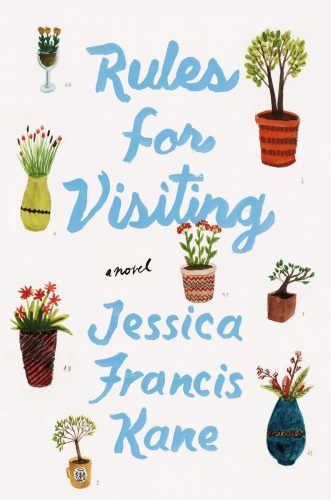