For India Hicks, the pink sands, laid-back attitude, and tropical flora and fauna of the Bahamas’ Harbour Island inform both her design sensibility and her outlook on life 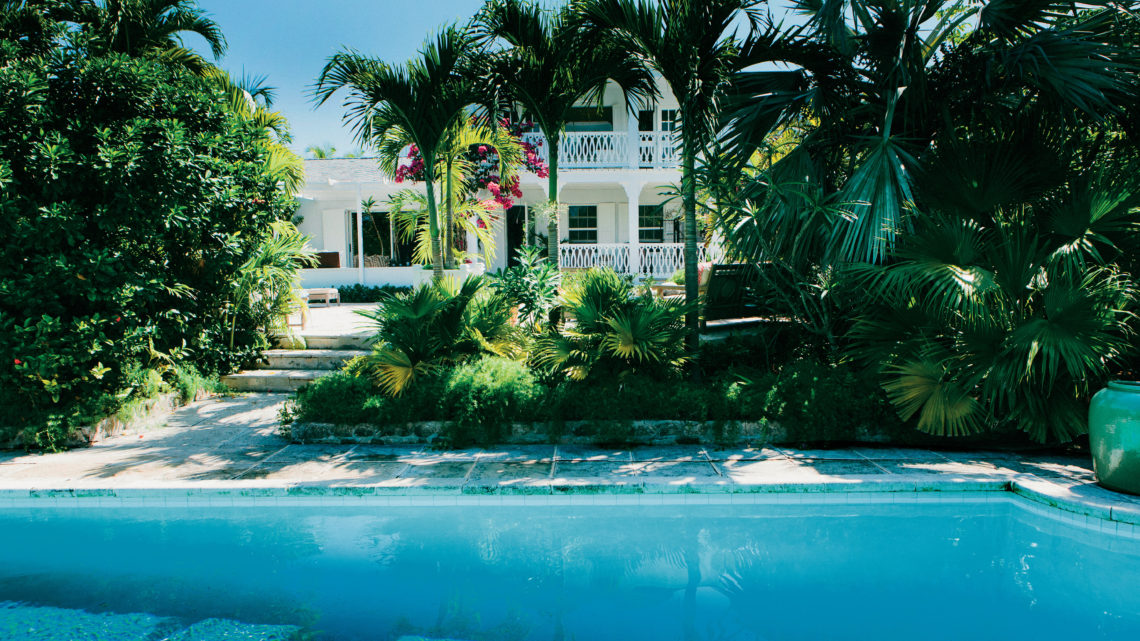 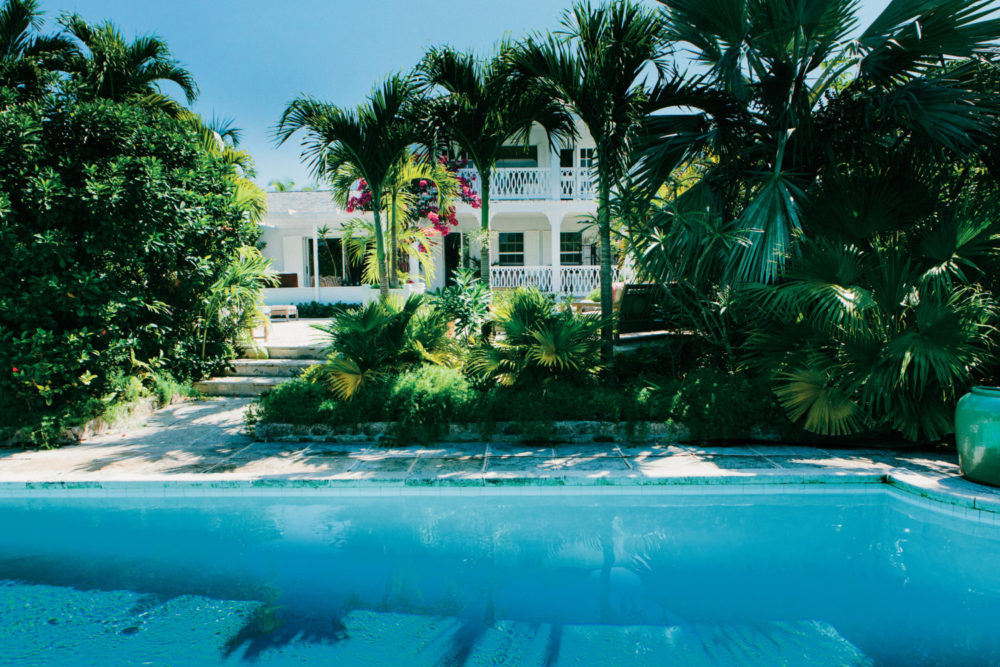 A view of India Hicks’ house, Hibiscus Hill, shows its many porches that beckon the family outside. Of course having a refreshing pool and the nearby beach have a little something to do with that too. | Photo by Brittan Goetz

“Would you mind terribly if I interrupt to take a call from another reporter looking for a quote about the new baby?” asks India Hicks, ever so politely, in her soft British accent. It may not be a typical way to begin an interview, but when the arrival in question belongs to a certain royal couple known as William and Kate, talk of design, flowers, and life on a Bahamian island can wait just a few more minutes. Given that Hicks is goddaughter to Prince Charles, and was first introduced to the world at large when she was a bridesmaid at his wedding to Lady Diana Spencer, it’s not surprising that she’d have a thought or two about the littlest princess. For the record, regarding the baby’s name, Charlotte Elizabeth Diana, well, Hicks heartily approves.

Indeed, Hicks herself was born into a privileged and rather rarified world. As the granddaughter of the Earl Mountbatten of Burma, the last Viceroy of India, she also happens to be in line for the British throne (no matter that she’s a long, long distance away, and now a tad further with the recent birth). But regarding her lineage, she is without question an heir to one of the greatest design legacies imaginable. Her father, David Hicks, was the iconic decorator known for knocking the dust right off of English style with his prolific use of geometric patterns and bold and often surprising color combinations, as well as for authoring a number of books on design, gardening, and flower arranging.

Whether Hicks would follow in her father’s footsteps, however, was anything but assured. “Absolutely not,” she says with a laugh, when asked if she always knew she was destined for a life in design. “Like many children who grew up in the middle of the countryside, I thought I was going to be a veterinarian, and then after a year spent traveling the globe with nothing but a backpack, that perhaps I would become a photographer for National Geographic.” After experiencing global adventures, and a number of years spent working as a fashion model, the family business, of sorts, came calling. That Hicks would forge her own path was inevitable—it’s an adventurous spirit that has characterized every step of her journey.

“The shadow of my father reached far and was an impressive one,” says Hicks. “It wasn’t until I moved to Harbour Island [she had spent holidays as a child at a house designed by her father on a neighboring island] and really started my own adult life that I began to have the confidence to think about design.” It was also then that she reconnected with a family friend, David Flint Wood, another British expat who would become her partner in life and business, and settled in for a lifestyle that was more than just a continent away from the one she’d been brought up around. “I not only fell in love with a man, but also with a more relaxed way to live,” she says.

The couple soon purchased a rambling 1950s house called Hibiscus Hill. Many additions (most important being their five children) and decorating projects were to come. However one of the first things they tackled actually involved a bit of subtraction—removing the plants that gave the house its name. “It sounds crazy, especially since I absolutely adore flowers, but David and I had fallen in love with a particular type of gardening, which is all about having green on green on green. There were really only a few hibiscus and they looked rather lost when we arrived. We decided it would be easier if we took them out,” says Hicks. Bursts of color still remain in the landscape through the pink oleander that thrives and blooms on the property.

The designer describes Hibiscus Hill as all about bringing the outside in, from kids who flow back and forth from house to beach in bare feet to the island flora that she uses to decorate tabletops, mantels, and bedsides. “I can’t resist flowers or anything natural inside my home. We decorate a lot with palm fronds, and I like to say that’s our signature style,” says Hicks. The décor is awash with serene, calming tones that serve somewhat as juxtaposition to the comfortable chaos that often comes with a house full of family, animals, and frequent guests. But like the island’s beetles that have often become uninvited—yet not unwelcome—visitors in the house, color has gently crept in as well, be it through strong dashes of pink paint on a stairwell, fabrics on pillows and furnishings (including the occasional geometric), or the many collections that line surfaces and walls. “I call our design a mix of British heritage and eccentricity, but it’s very specific to our life here. It’s our island runaway story,” she says, “but I am my father’s daughter after all.”

That island story has expanded to decorating a series of exclusive guesthouses (some available for rental), and owning a local boutique called the Sugar Mill Trading Company, filled with Hicks’ finds such as embroidered and patterned caftans, jewelry, swimsuits, and quirky children’s toys. But it’s the most recent chapter that has Hicks practically bubbling over with excitement—and ironically it’s one that lately finds her on a plane headed away from her adored island. After stints designing products for companies such as Crabtree & Evelyn and HSN, Hicks has launched her own eponymous brand, creating fragrances, accessories, and jewelry sold through home-based sales representatives she calls her “style ambassadors.”

The beetle motif has become a star player in the initial collection, making appearances in scarves, on packaging for her beauty line, and in fabrics for totes and bags. “I believe he has always brought me much luck,” she says. Flowers have their role too, no surprise, as gardens have always been an integral part of her life. “Back at our home in England, my father designed a walled, secret rose garden, and it’s always been an emotive place for me, so much so that I created a fragrance called English Rose, which is all about that garden full of rose and peony petals,” Hicks continues. Interestingly, another fragrance she developed is named Wild Spiderlily, based on the hearty, yet delicate flower that grows in the sand in her beloved Bahamas. One just might surmise that the two fragrances serve as metaphors for how Hicks expertly blends her past and present—always finding a way to keep the best of both worlds. 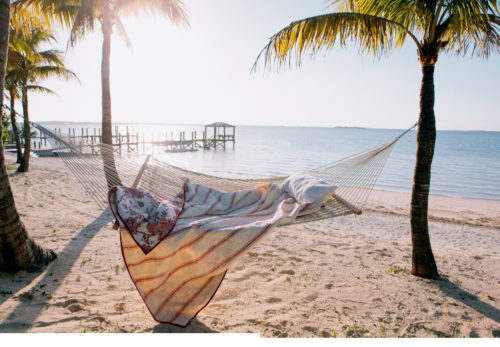 It’s not hard to imagine why Hicks was willing to trade damp, English winters for a beach in her backyard. | Photo by Brittan Goetz

“I think I’d be very happy in a house filled with roses and peonies,” says Hicks, but on this tablescape, a lone blossom will do. | Photo by Colleen Duffley 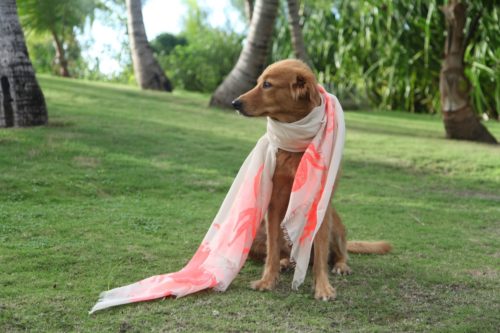 Samson “puts on the dog” in the Siren scarf designed by Hicks for her new eponymous collection. 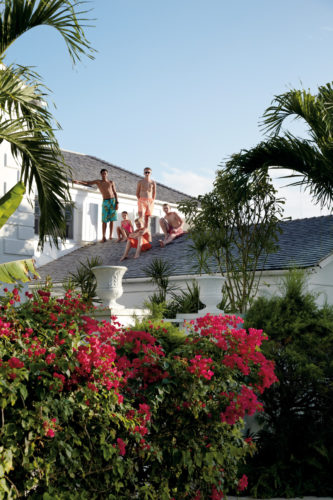 “Island life is a wonderful way for our kids to grow up,” says the designer and mum of five. | Photo by Miguel Flores-Vianna