When Tiffany Blake and George Fox decided to donate their wedding budget to a friend in need, creative and kindhearted vendors collaborated to help them achieve a day of their dreams that sacrificed nothing in style

Tiffany Blake defies expectations, as any self-respecting redhead should. After graduating from the University of Georgia, the Atlanta native moved to Los Angeles to begin a modeling career that would take her around the world. She loved the creative side of fashion, the editorial work, the styling, and the innovation of design. Yet despite her success, Blake realized she needed a break from fashion, so she decided to move to Park City, Utah, where her plans were ambitiously average. “I wanted to be a normal girl—to eat hamburgers and drink beer and be a ski bum,” remembers Blake. She got a job at a ski store and began the vigorous work of bumming around.

One day George Fox walked in. If Fox was intimidated by Blake’s runway looks, he hid it well. Blake remembers, “He strutted into the store, grabbed a pair of sunglasses, tossed them across the counter, and said, ‘Put these on my account.’” Shocked by his cavalier attitude, she whispered to another clerk, “Who is this guy?” The clerk replied, “Oh, that’s Foxy. He thinks he’s the best skier in the world, and he’s probably right.”

Initially the friend wouldn’t take it, saying, “This is your wedding! You have to have this!” But redheads have a way of being persistent, and Blake sent the money. Now with a drastically diminished budget, the couple had to prioritize. They knew they wanted to marry at the Washington School House Hotel, a historic boutique hotel in the middle of Park City, so they spent the majority of their remaining money renting the space. The rest, Blake believed, she could improvise. “I thought, It’s going to be fine. I can borrow a dress. There are wildflowers in my yard. We can cut them and make a bouquet,” she says.

Blake had already asked D’Arcy Benincosa, an internationally acclaimed, Salt Lake City photographer, to shoot the wedding. When the bride went back to Benincosa and explained that her situation had changed—and her budget had changed—Benincosa was moved. “D’Arcy said, ‘We are going to make this happen,’” remembers Blake. The photographer offered a trade—her photography services for the bride’s creative help with some projects for women’s causes she was working on. Benincosa didn’t stop there. She called her favorite vendors—bakers, florists, and bartenders—and asked them to consider contributing their services at a reduced price. “These vendors didn’t even have all the details of my story,” says Blake, still amazed at the outpouring of their kindness.

The talented Tess Comrie of Le Loup Cakery told Blake she would make the cake at cost—all the bride needed to do was choose the favors. The cake, vanilla with Earl Grey buttercream applied with painterly strokes, reflected the couple’s blend of high fashion and rustic mountain comfort. Rachel Osguthorpe, a floral designer whose creativity is matched only by her generosity, agreed to work at cost as well, going so far as cutting flowers from the yard herself and using gold goblets she had inherited from her grandmother for containers. “Tiffany is such a sweet, motivating person,” says Osguthorpe, the manager and designer at Jolley’s Gift and Floral in Salt Lake City. “She has a great energy and made the whole experience enjoyable. I was really happy to be a part of it.”

Throughout the planning process, the bride encouraged her vendors as fellow artists. “I’m a creative director at heart,” says Blake, who made style sheets evoking a moody, relaxed look but essentially gave her vendors carte blanche (a very un-bride-like thing to do). “I told them, ‘You’re essentially donating your time. I want you to do what you love and do what you’re good at. I want you to do something you’ll be proud of.’”

And who wouldn’t have been proud of Le Loup’s gorgeous, asymmetrical wedding cake adorned with flowers and berries that looked like jewels? Or the elegant crown of antique garden roses Osguthorpe designed to accent Blake’s auburn hair and red lips? Or a bridal bouquet that seemed to capture the mountain’s late-summer bounty in a single handful? Or the signature orange cocktail called the Stone Cold Fox, created for a whiskey-loving groom by a generous bartender and guzzled all night long by thirsty dancers? Certainly a stranger peeking through the hotel’s large glass windows would never have guessed that this bride was trying to do more with less. And in the end, she didn’t have to. Most weddings are celebrations of romantic love, and that’s a beautiful thing. Tiffany and George Fox’s wedding was a celebration of a more expansive kind of love: selfless, surprising, and abundant. 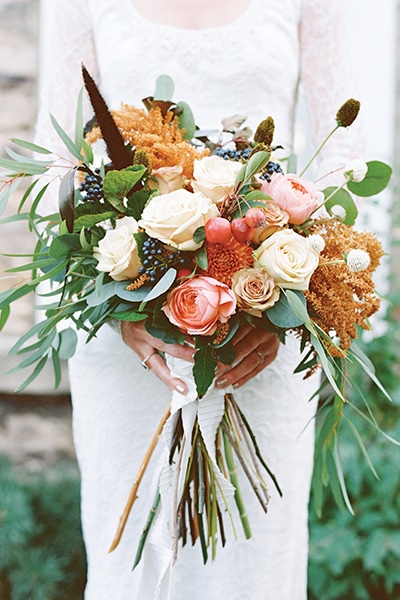 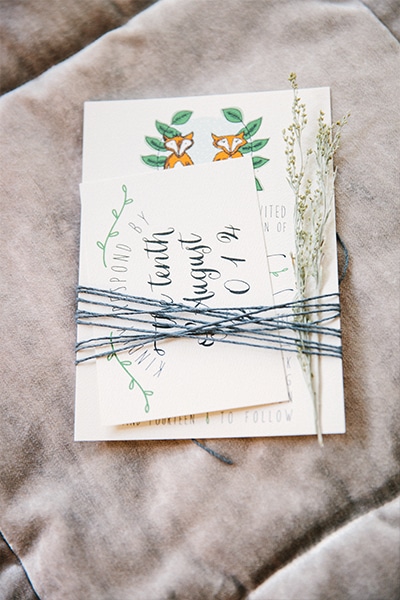 Charming save-the-dates featured two foxes holding hands. The bride picked sprigs of sage from her backyard and tucked them into the cards that she tied with string. 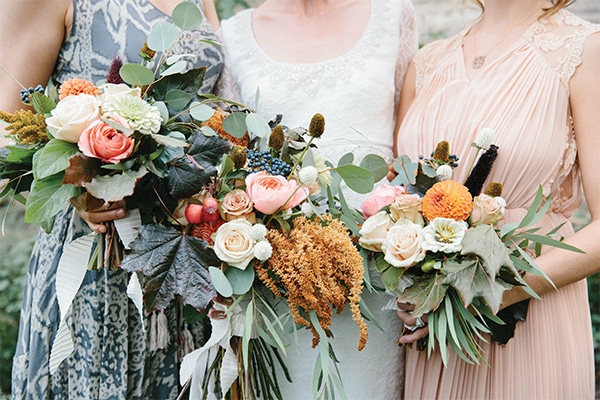 Roses and dahlias mixed with more humble materials such as oversized leaves and trailing eucalyptus to create free-spirited bouquets. 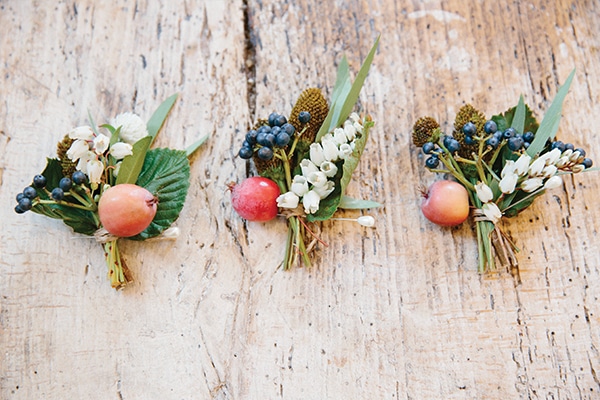 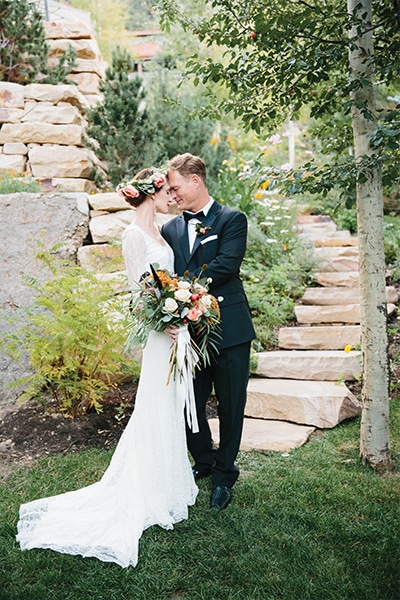 When the bride approached her groom with the idea of scaling back their wedding plans and budget to help out a friend, he quickly agreed. “Whatever you want to do, I’m on board with,” he said, “as long as I can wear some cool shoes.” 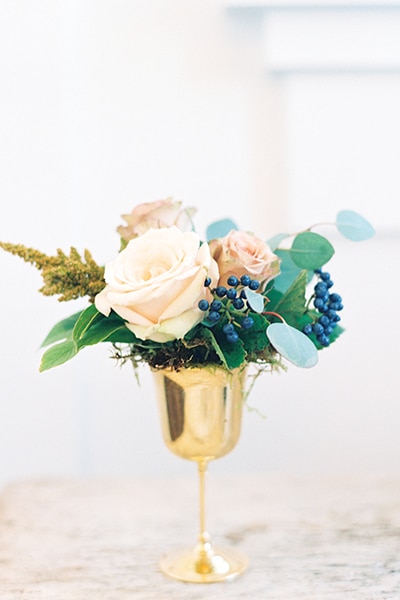 Osguthorpe used her own heirlooms in the décor, including her grandmother’s gold goblets as vases. 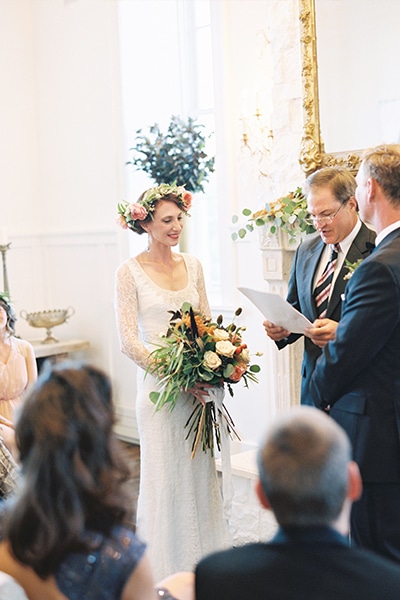 The intimate ceremony was held in front of family and close friends in the historic venue's living room. 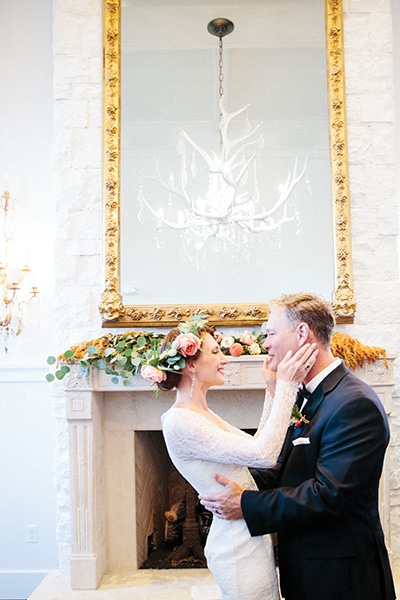 With smiles and tears, the couple exchanged wedding vows they wrote themselves. 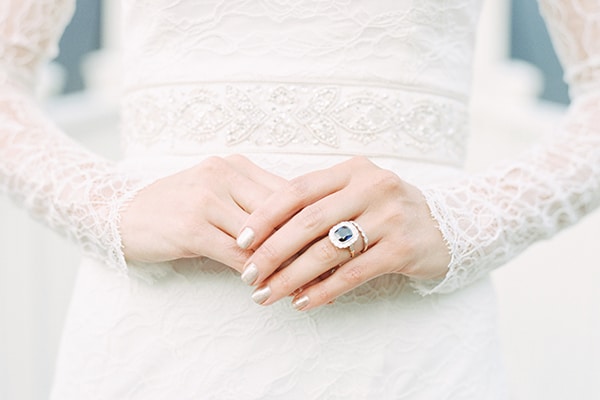 The groom proposed to the bride in his front lawn with an antique sapphire ring. 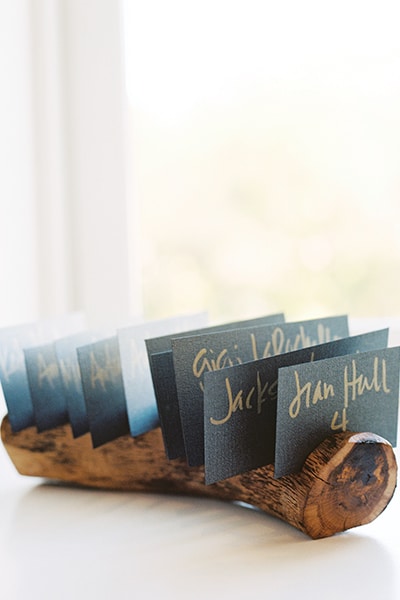 The bride designed rustic escort-card holders that the groom made using wood from their backyard. 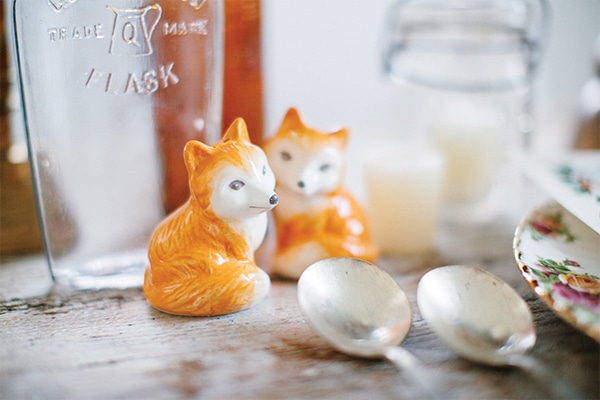 The fox salt-and-pepper shakers were a wedding-day gift from the groom’s older sister and made a perfect last-minute addition to the table. 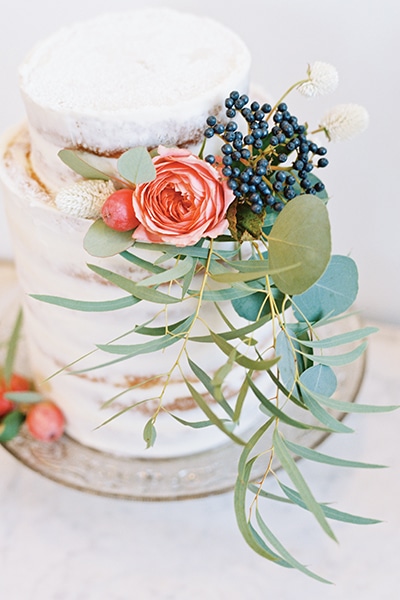 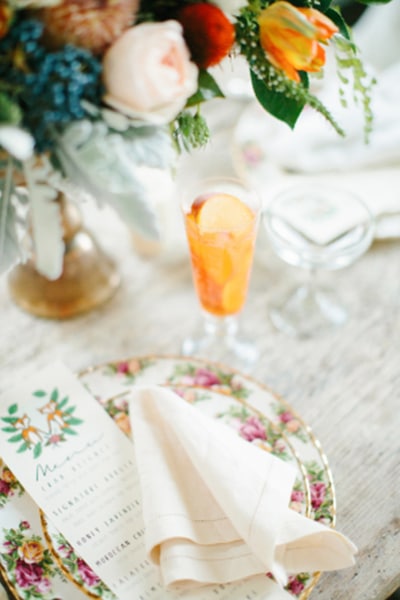 The fox illustration was also used on the menus at the reception. 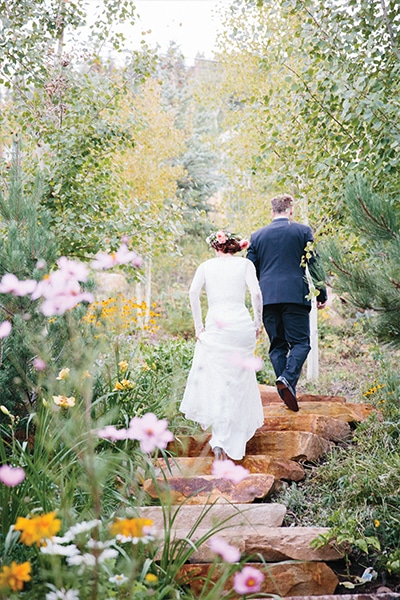 The gardens of the Washington School House Hotel echoed the stylish but laid-back mood that permeated the day.