The influential 20th-century designer Tony Duquette brought life to everything he touched with an artistic vision that transformed objects, rooms, and gardens into fanciful interpretations of the natural world 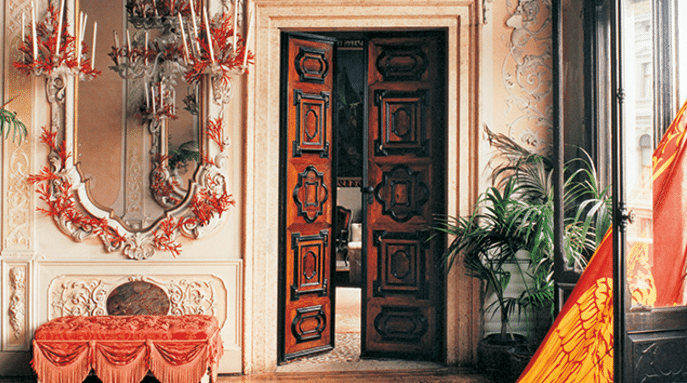 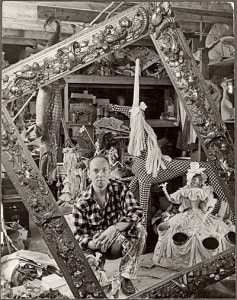 Envision Fred Astaire and Lucille Bremer dancing through an enchanted garden of bejeweled trees in Ziegfeld Follies, or the Duchess of Windsor gliding into an elegant room in the ultimate statement necklace of citrine, pearls, and peridot fashioned into leaves and flowers. Picture a grand Venetian palazzo with elaborately carved plasterwork that has coral branches tucked in with seemingly random exuberance, or an exotic Los Angeles garden spilling over with lush greenery, chinoiserie follies, and pavilions. All reflect the genius and hand of Tony Duquette, the California-born artist who spent his life bedecking and dazzling everything he touched with his imaginative interpretations of the natural world. Duquette was the first American artist to be honored with a one-man show at the Louvre, and not only was he an artist and sculptor, but also a prolific designer of costumes, interiors, furniture, and jewelry. “Tony Duquette had the eye, lived the dream, and created the ultimate setting. He mixed glamour with the glittering social scene like others would hang decorations on a Christmas tree,” fashion designer John Galliano once wrote.

In his early years Duquette created intricate and beautiful jewelry pieces, while at the same time designing movie sets for MGM Studios, 20th Century Fox, and Universal Studios. Legendary directors Vincente Minnelli and Alfred Hitchcock sought out the freelance designer for his ability to create theatrical magic to visually tell their stories. Soon other luminaries in the business and social worlds, from Doris Duke to J. Paul Getty to Norton Simon—among others—fell in love with Duquette’s work and commissioned him to create otherworldly interiors for their houses, thus catapulting the artist as an influential force in interior decoration. 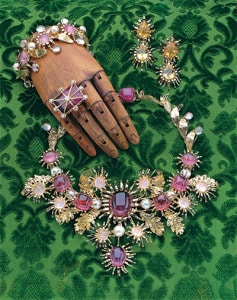 Reproductions of jewels originally designed for the Duchess of Windsor shown above. | Reproduced with permission from More is More: Tony Duquette (Abrams New York, 2009).

But perhaps Duquette’s greatest masterpieces were always his own houses, and no more so than the house and gardens at Dawnridge, the Beverly Hills estate that he and his beloved wife and muse, Beegle (herself an artist), fashioned from a piece of property overlooking a ravine, and which has become an enduring calling card for his aesthetic. The original house, a 30-by-30-foot box, was designed by Duquette with noted architect Casper Ehmcke, and transformed into an exotic wonderland swathed in hand-painted murals and filled to the brim with European antiques and pieces the couple created. When they built the house in 1949, the land was covered in sagebrush and native scrub, with pine trees and eucalyptus reaching to the upper story. As neighbors began to fill in their canyons with tennis courts and swimming pools, the Duquettes kept the natural topography in place.

When the property they subsequently purchased next door burned to the ground, the Duquettes decided rather than rebuild the house they would create a garden. Soon they began moving jade trees and other succulents from their ranch in Malibu to Beverly Hills, all of which remain in the garden today.

In 1972 Tony Duquette met Hutton Wilkinson, then a 17-year-old decorative arts student who would become his protégé and business partner. Wilkinson is now the owner of the famed Dawnridge estate, as well as the creative director and president of Tony Duquette, Inc. Today the three-acre property features a multilevel garden with more than 200 different plant species, pagodas, a small lake, an Indian temple, and numerous pavilions. 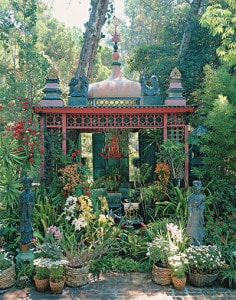 An exotic pavilion suspended like a treehouse over the ravine at Dawnridge. | Reproduced with permission from More is More: Tony Duqette (Abrams New York, 2009).

“Tony was not a terribly demanding plantsman. He loved native plants and had no interest in the one perfect rose. Instead, he liked to use one type of plant en masse and repeat patterns,” Wilkinson says. The plants brought over from the Duquettes’ Malibu home were local species that originally grew in Chavez Ravine, the current site of Dodger Stadium in Los Angeles. When the native vegetation was dug up for the stadium’s foundation, Duquette went to the worksite, gathered truckloads of discarded plants, and carted them home.

“Today his approach would be called sustainable, and Tony would be praised as a champion of the indigenous. The truth is that Tony was a recycler before anybody thought about design that way,” Wilkinson notes. He built the garden at Dawnridge the same way he decorated homes for his friends and clients, using what was on hand, turning cast-of materials into art.

Wilkinson bought the house after Duquette’s death in 2000 to preserve the property as a tribute to his mentor and as a living historic home. “We have something like 1,000 pots scattered around the property, and we keep fish and turtles in the ponds,” he says. “The house is always alive with parties, visitors, and work.”

The lake at Dawnridge is a mini ecosystem made up of waterfalls, rocks, and water plants. Among recent additions, an Indian temple Wilkinson created using antique architectural elements found on the subcontinent is a favorite. “The vast space at the very foot of the garden had always been neglected by the Duquettes, but it was a space that screamed for water,” he says. Marrying the garden with a pond not only visually altered the look and expanded the space, but also gave the garden greater use and personality. “I think Tony and Beegle would be pleased,” says Wilkinson. 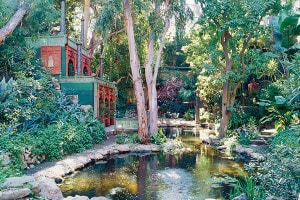 Dawnridge’s Indian pavilion and pond were added to the property by Hutton Wilkinson, Duquette’s business partner and now owner of the landmark estate. | Reproduced with permission from More is More: Tony Duquette (Abrams New York, 2009).

Of that one has little doubt, as the couple entertained frequently in their magical garden, and took parties very seriously. They would completely transform the setting for their spectacular events. Every tree and bush would be lit and chandeliers hung from branches, sometimes suspended from invisible wires. Balinese or flamenco dancers would be enlisted to perform for delighted guests, who were served by wait staff dressed in costumes. But the ultimate showman, as always, was Duquette, for certainly few could match his opulent and fertile imagination. And at Dawnridge, the show goes on.