From ancient Egypt to Easter Sunday, the lore and symbolism of this historical bloom is second only to its beauty 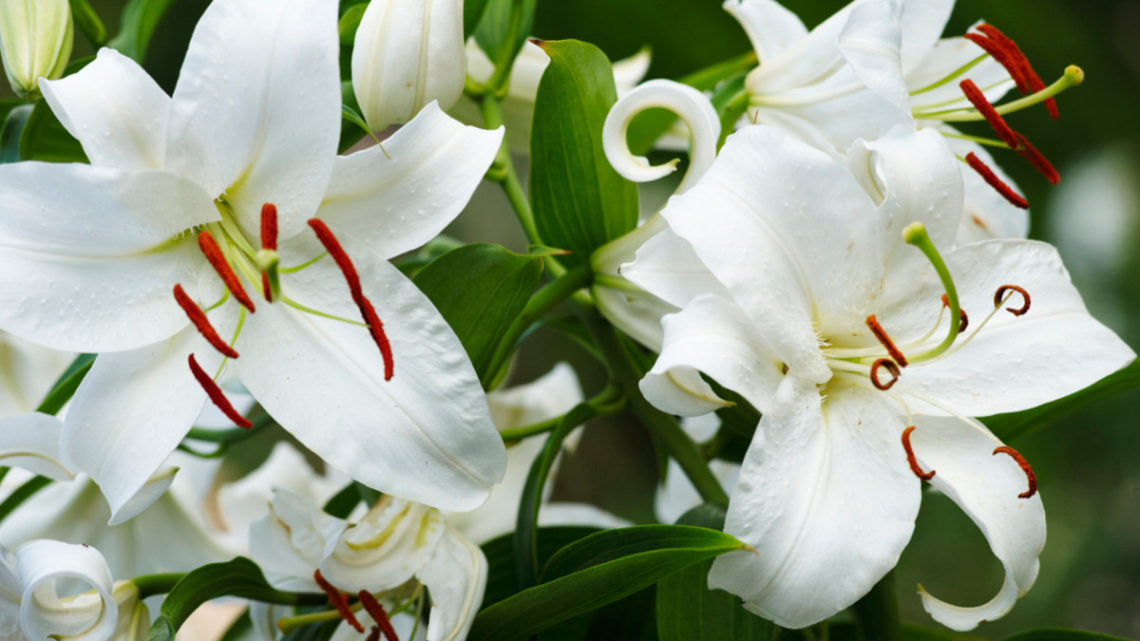 Peek through the glass of of a hospital nursery these days, and there’s a good chance that one of those tiny, blanketed bundles is a girl named Lily. The name Lily, long beloved by florally inclined parents, is enjoying a surge of popularity, currently ranked in the top 20 for most popular names, according to the U.S. Social Security Administration. And why not? With its elegant, nodding, bell-shaped bloom and heavenly scent, the lily remains one of the world’s most beautiful and beloved flowers. 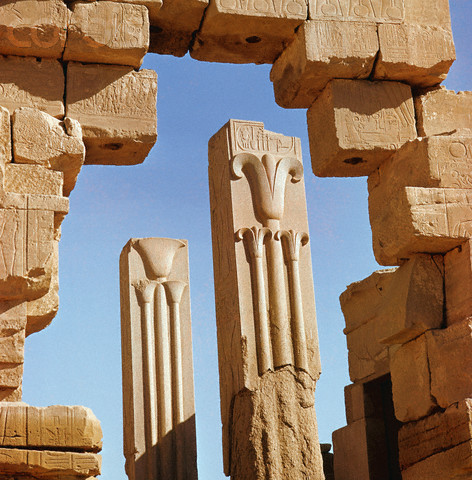 Seen as a symbol of fertility and rebirth, the lily often appears in Egyptian carvings. Pillar reliefs of a lily and papyrus adorn the Temple of Amun in Karnak. Image by © Roger Wood/CORBIS

Our affair with the lily stretches back thousands of years, and as history illustrates, we’ve been smitten from the start. The first known representation of the lily, etchings found on a villa in Crete, date back to 1580 B.C. The lily figures prominently in Greek mythology, sprouting from drops of milk from Hera, mother of the gods.

Apparently the sight of the white, pure flower so offended Aphrodite—the goddess of love, lust, and pleasure—that she cursed the lily with a pistil that would forever grow from the bloom’s center. Much to Aphrodite’s dismay, the lily’s symbolic importance only grew after that, coming to represent both purity and fertility. In ancient Greek weddings, the bride wore a crown of lilies and wheat symbolizing purity and abundance. The ancient Egyptians celebrated the lily as a symbol of fertility and rebirth, drawing its image on their tombs—a gesture replicated by Christians years later for the same reasons. In Chinese culture, the lily is a good-luck charm.

A vase of lilies in Jan van Eyck’s The Annunciation symbolizes the Virgin Mary’s purity.

Ancient Hebrew culture valued the lily as well, and mentions of the flower as a metaphor for beauty and purity appear throughout the Bible. In the Sermon on the Mount, when Jesus wanted to illuminate how God provides for His creation, he chose an image of the lily, saying, “And why are you anxious about clothing? Consider the lilies of the field, how they grow; they neither toil nor spin; yet I tell you, even Solomon in all his glory was not arrayed like one of these.”

The Roman Catholic Church, never one to scrimp on symbolism, adopted the white lily (later known as the Madonna lily) as a symbol for the Virgin Mary—its whiteness symbolizing Mary’s purity, innocence, fertility, and connection to the divine. During the Renaissance, artists like Jan van Eyck of the Netherlands and Sandro Botticelli of Italy featured lilies in their depictions of the Annunciation, the scene of the Archangel Gabriel bringing Mary the news of Christ’s birth.

Perhaps the most ubiquitous iteration of the lily comes in the form of the fleur-de-lis. Traced back to ancient times, the fleur- de-lis, a stylized version of the lily, appears on numerous coats of arms throughout Europe. It is most notably associated with the French monarchy (though the New Orleans Saints and their Who Dat Nation seem to be giving the French a run for their money).

Though the lily has long been associated with the ethereal realm, it has also been celebrated for its practical uses. In the 8th century, Charlemagne mandated that his subjects grow lilies in their gardens for medicinal purposes. During the Elizabethan era, lilies were thought to have healing properties and were used to combat fever, aid arthritis, and cleanse wounds. People throughout the ages have used lilies in perfumes, cosmetics, and anti-aging creams.  Lily flower petals mixed with honey were thought to remove wrinkles.

The Language of Lilies 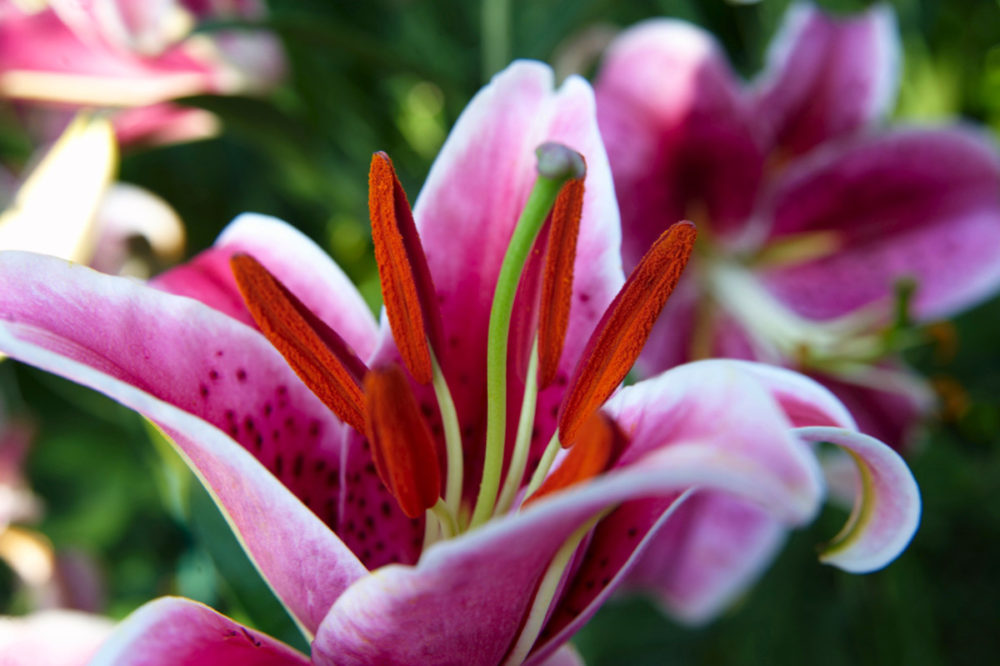 The lily’s pistil, according to Greek mythology, grows from the bloom’s center because of Aphrodite’s curse. 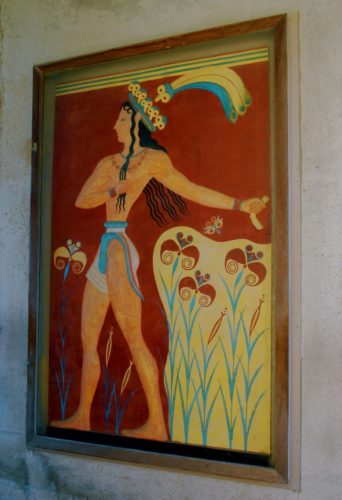 A wall fresco found in Crete, called the Prince of Lilies, features one of the first known depictions of this iconic flower. (Photo ©2009 Panegyrics of Granovetter, via Flickr)

During the Victorian age, a time of buttoned-up repression and mannerly obsession, people used flowers to communicate feelings they weren’t at liberty to share through speech. Given the vast variance of meanings among flowers (even flowers within a species), this code of communication could be effective but tricky. Pity the poor Victorian gentleman who intended to praise a woman’s purity but sent her a daylily instead! (Daylilies, unlike white lilies, meant coquetry or flirtation.) And shame on the unsuspecting man who sent his lover yellow lilies, a perfectly beautiful flower that carried a perfectly awful message: falsehood. Fortunately, in 1819, French florist Charlotte de Latour published Le Langage des Fleurs (The Language of Flowers) in an attempt to steer customers toward the right bouquet for the right occasion.

Today, the lily remains a favorite choice for brides who love the soft, creamy white of its flower and its symbolism of innocence, purity, and new life. Those same qualities make it an equally powerful symbol at funerals. But perhaps the most moving, modern use of the flower comes each year on Easter Sunday, when church altars around the world are awash in lilies. For the church, the Easter lily flower is a sign of the return of spring and the promise of new life. And in the language of flowers, there is no more inspiring message than that. 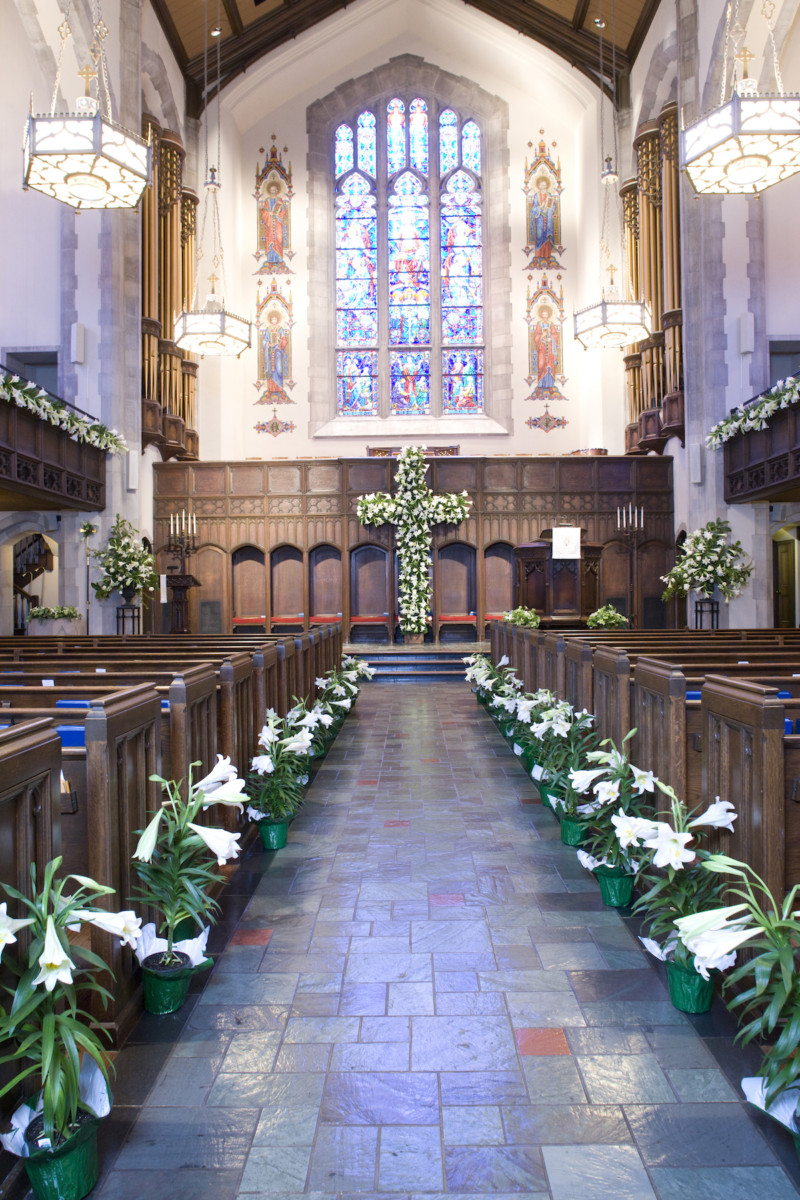 Independent Presbyterian Church in Birmingham, Alabama, in its Sunday best for Easter