A Modern Take On Botanical Drawings

The bold sensuality of Christian Brechneff’s black-and-white flowers is an unexpected approach  to rendering colorful, delicate blossoms. Even while his technique for applying ink requires remarkable control, the end result is free and flowing, as though a light breeze nudges the petals. He readily admits that his work has grown through studio mishaps and impulsive exploration. It just may be that the irrepressible optimism and improvisation of the artist are a big part of what enchants us in his art.

Drawing is at the heart of Brechneff’s work. With black ink on paper and deep blue-black oil on canvas he delineates clear forms and lines. He has developed a sensitive, difficult technique of drawing with a medical laboratory pipette that looks and functions like an eyedropper. Explaining his devotion to the pipette, he says, “I suck ink into the rubber ball, and then I control the flow of the ink by pressing the ball very delicately. That’s tricky because you can make a big mistake, but you can also get very thin lines or thick lines—lines I could never do with a brush.”

Whether drawing a figure, landscape, or flower, he prefers to work from life. You can hear the consternation in his voice as he says, “A flower from a photograph? It’s not alive. I love it in the studio when the flower changes. It loses a leaf. I can take a bud off the plant and hold it in my hand and turn it around. Sometimes I cheat. I suddenly have six leaves when I should have eight. I feel more strongly about getting the drawing right than getting the actual flower right in a botanical way.”

Designer Bunny Williams was among the first to be captivated by the scale and boldness of his flowers. As his friend and neighbor, she knew that Brechneff was well known in Europe for his landscape paintings. On her first visit to his studio, she was taken with an oversized hollyhock drawn in ink. She remembers, “As a flower enthusiast, I’m always looking for something different. We have a lot of beautiful, delicate flower works, but his is a modern treatment of botanicals.”

Born in the former Belgian Congo, educated in Switzerland, and at home in New York and Connecticut for the last few decades, Brechneff’s interest in flowers really took root 27 years ago when he moved to a weekend house with a garden  in Connecticut. His flower paintings began with hollyhocks and irises from his own garden, though as all gardeners know, it’s a seasonal subject. Thus the artist frequently travels to draw exotic blooms such as orchids and birds-of-paradise, sometimes working from Williams’ home in the Dominican Republic. While in St. Martin he was excited to discover Tacca chantrieri, or bat flower, which he painted immediately, and he recently returned, exhilarated by the opportunity to draw more.

That high-spirited enthusiasm and an openness to happy accidents continually enriches his work. For instance, it was leftover paper in Brechneff’s studio that prompted the large scale of the flower drawings. “I didn’t really think it through,” he says. “I had a giant piece of paper and thought, Why don’t I go big? The first was a lily and it was huge. It had a real impact, that piece.”

And it was a slip with the delicate pipette that dropped oil paint on the canvas where it was not intended a number of years back. Rather than discard a fine drawing, Brechneff concealed the mistake by painting over it with a gray-blue background color that he had in the studio. That was the beginning of his now signature style on canvas.

When asked if he ever tires of painting the same flowers over and over again, Brechneff is nonplussed. “Hollyhocks and irises continue to amaze me because I use the living plant,” he says. “It’s like a studio model. Who would ever get bored with the human form? I always learn something new. No two plants are the same.”

His response is a window into his reverence for nature and its influence on his work. “It enriches me. Through my absorbing what nature gives I can bring it closer to the viewer in my special way.” Brechneff hesitates, trying to put thoughts into words. “It’s not my imagination. It’s more my transforming what I see into a painting, and it’s nature that allows me to do it.” 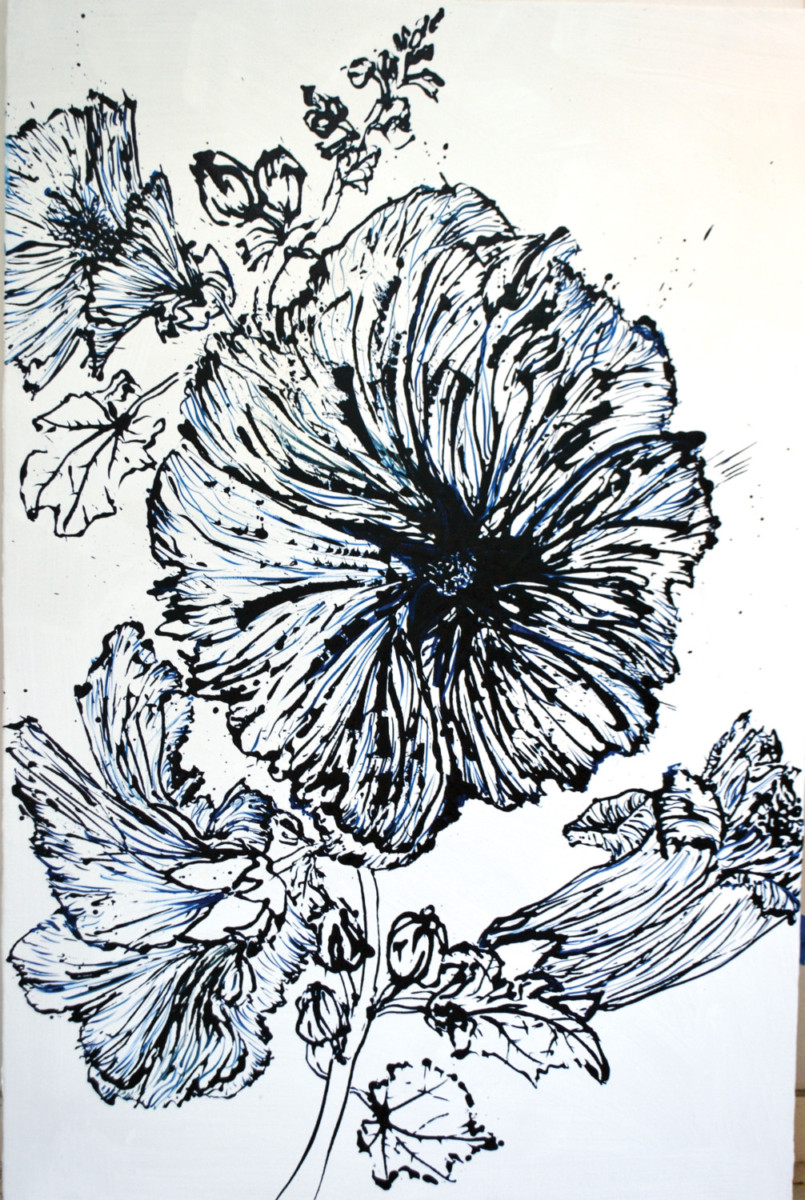 Lively, open compositions balance the bold lines laid down rapidly in Brechneff’s large-scale pieces. The artist prefers to finish a drawing without interruption to achieve an unconstrained lightness. Hollyhock, oil on canvas, 54 by 35 inches 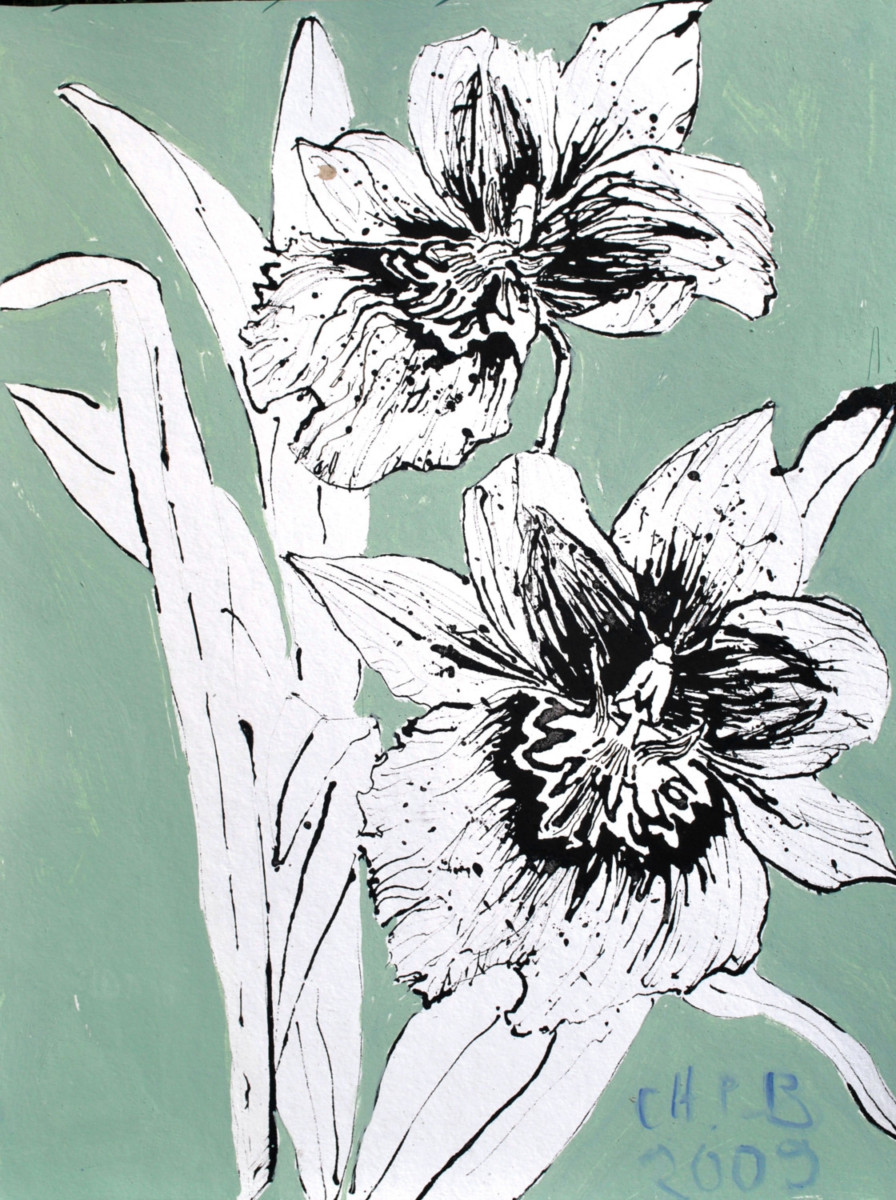 Colored backdrops for his black-and-white drawings originated from an accident with the pipette. Orchid, ink and oil on handmade paper, 24 by 18 inches 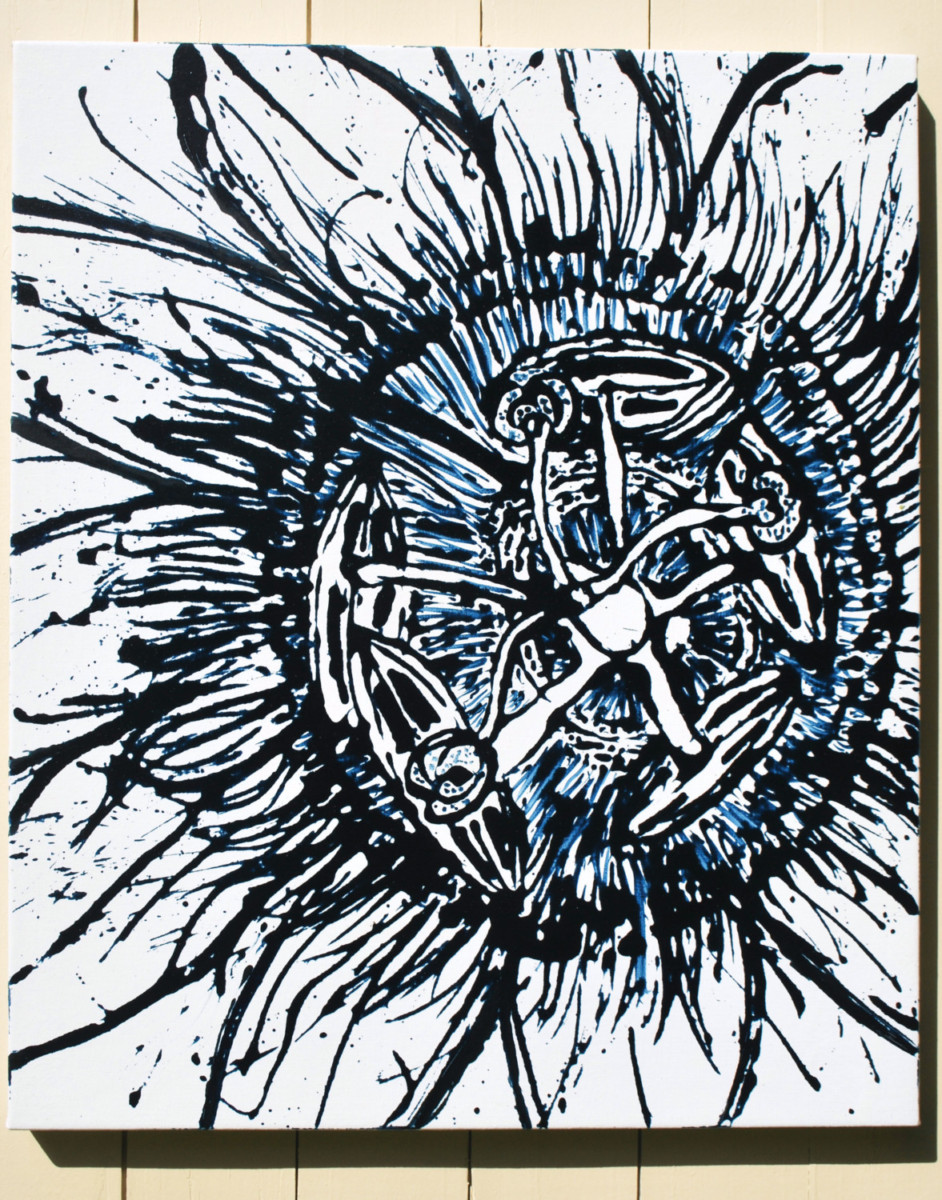 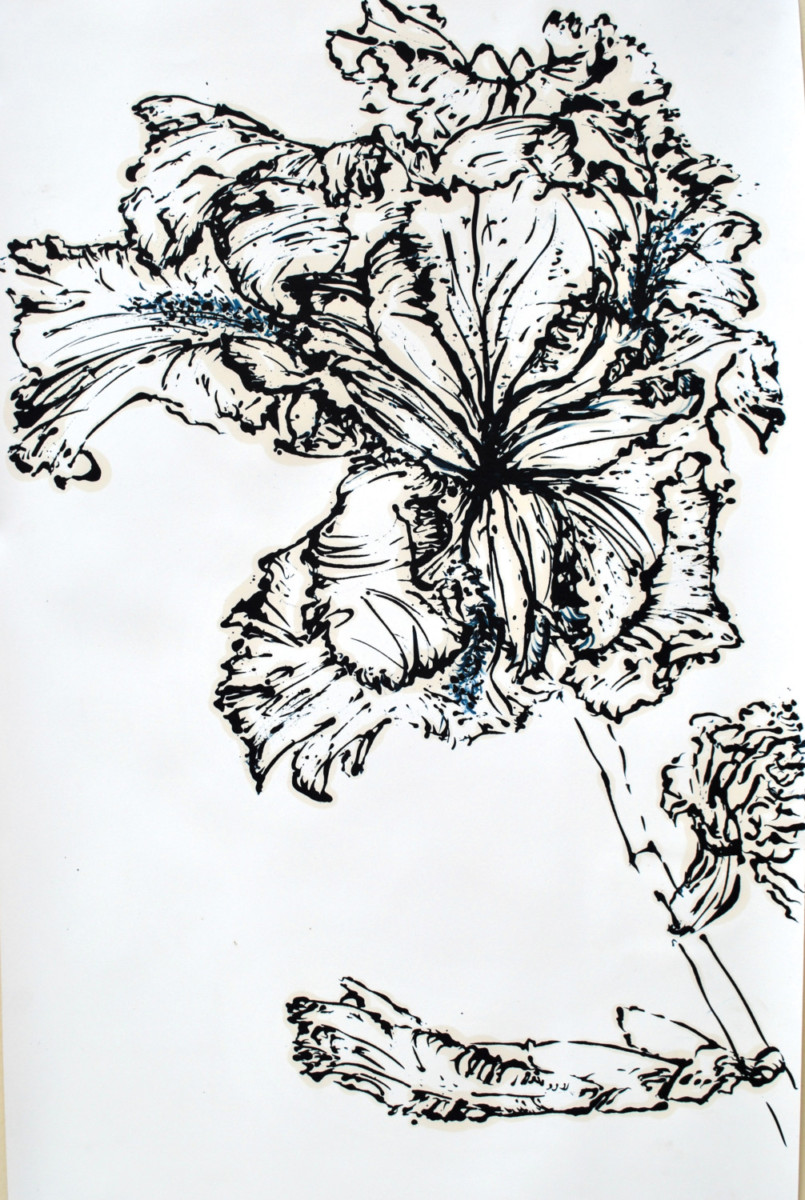 Drawings of irises (oil on handmade paper, 52 by 33 inches) illustrate the diversity possible when drawing from nature. 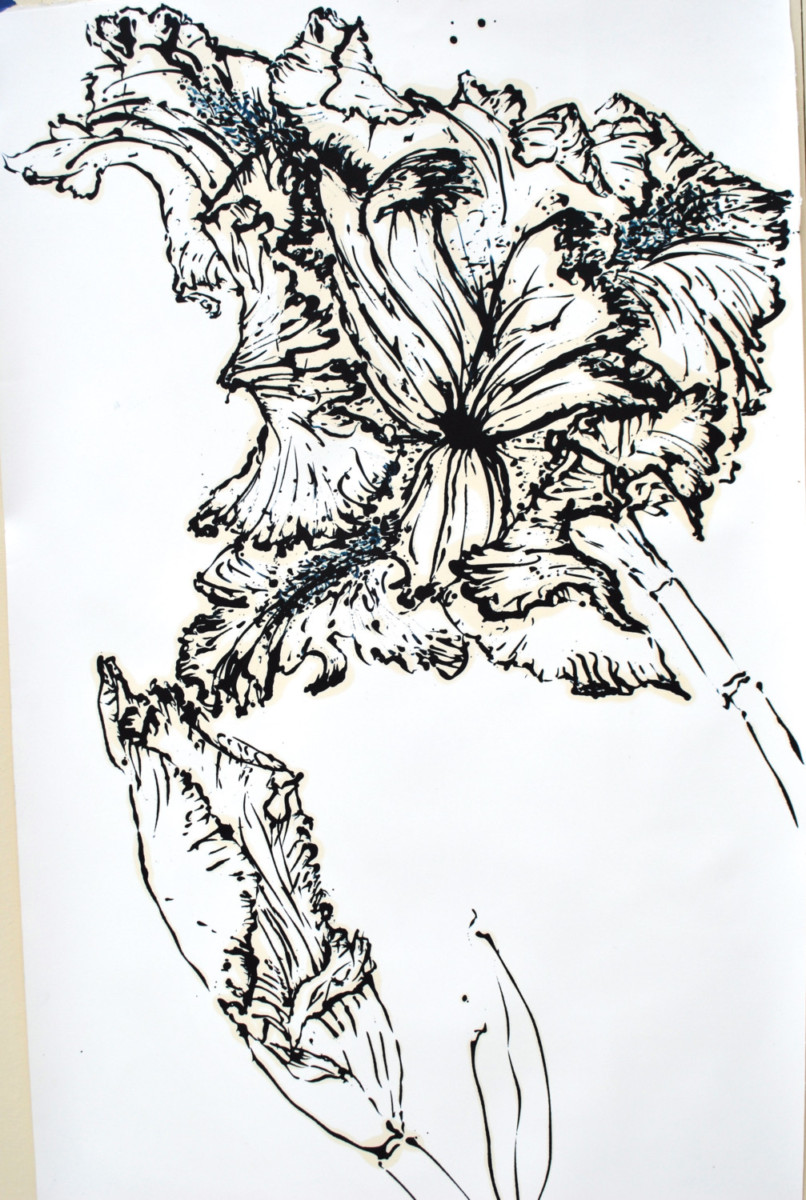 DSC_0218
Another oil sketch of an iris. Brechneff compares his flowers to human models in a figure-drawing studio. 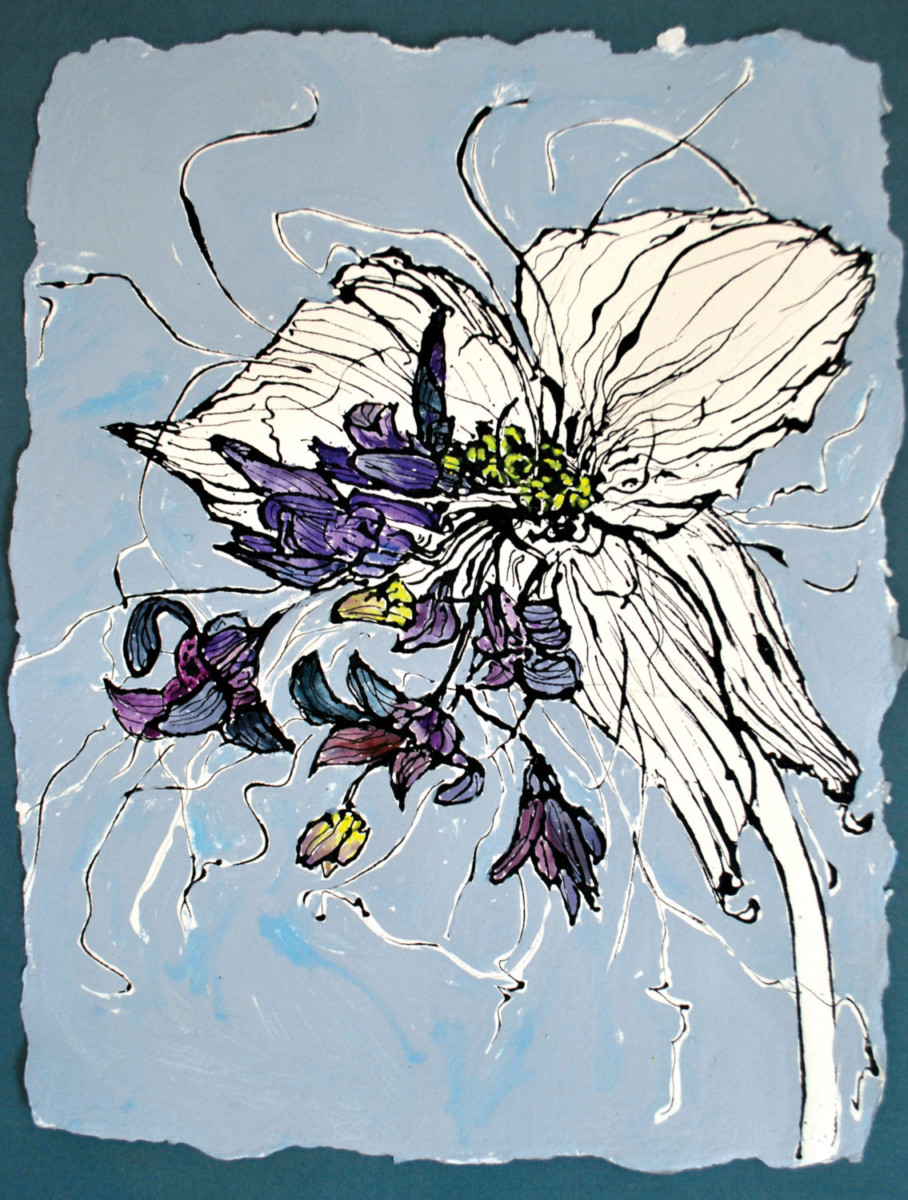