Make a Statement with Monogrammed Linens

Jane Scott Hodges, the owner of Leontine Linens based in New Orleans, shares her expert tips for choosing monograms and table linens that perfectly suit your style 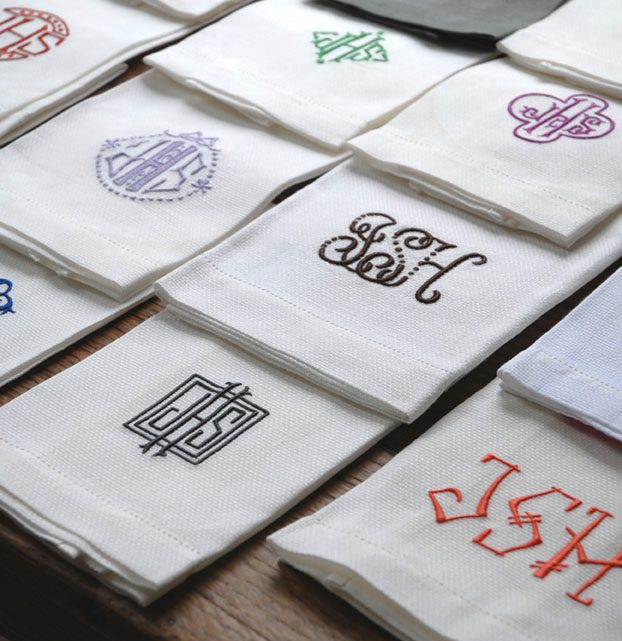 While there is a long-standing tradition and etiquette to selecting your monogram and what initials to use, my philosophy is to not be beholden to any one doctrine or rule. In today’s world, I prefer to think of my monogram as something uniquely and perfectly suited for me and my personality. 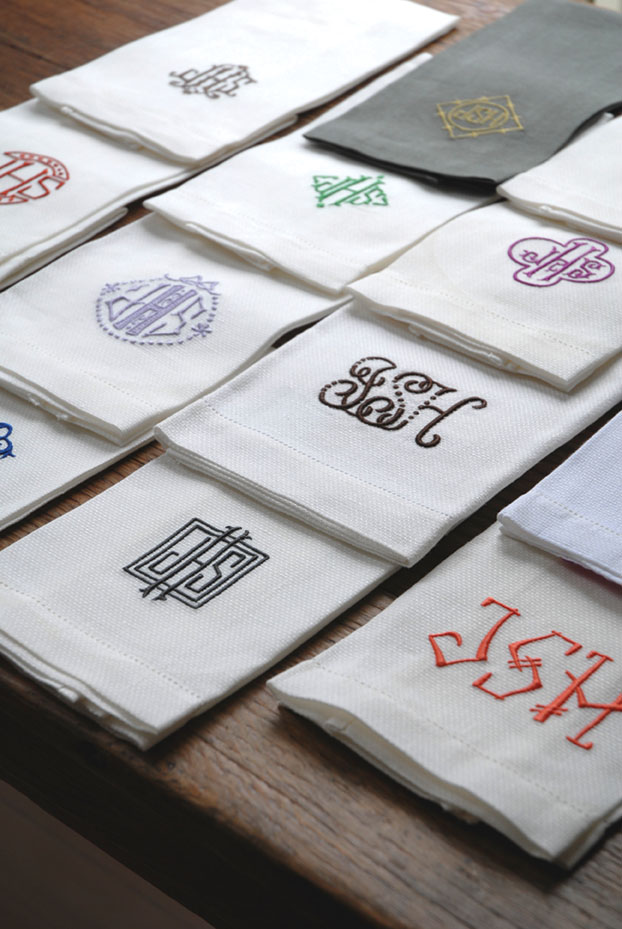 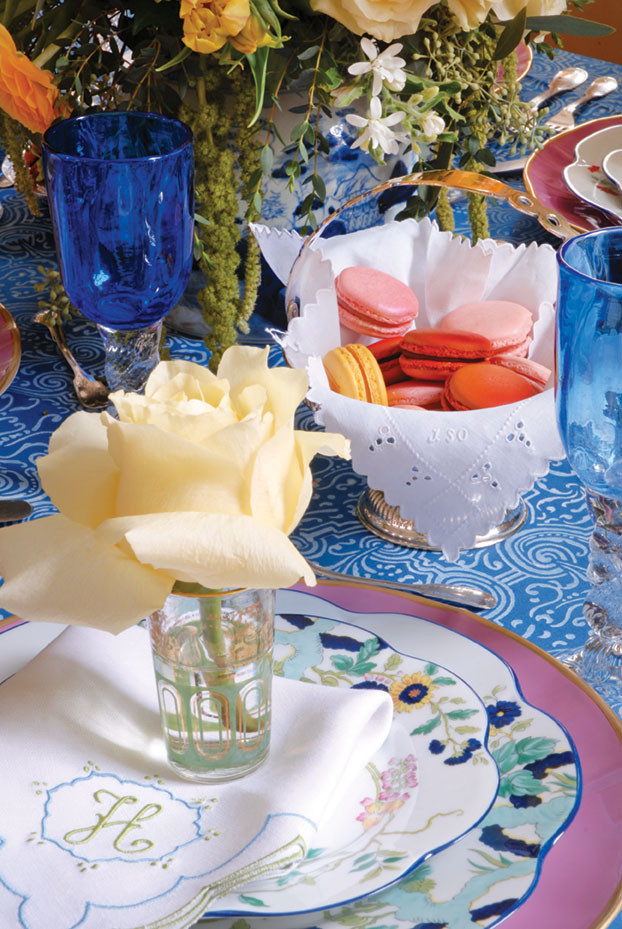 Monograms are applied to all sorts of items, some for public show and some just for personal enjoyment. There are so many elements that make a monogram your own, including the initials you choose to combine, the letterforms themselves, the color combinations, and the item you are personalizing—all these things come together to create a truly bespoke item that is yours and yours alone. Here are a few things to consider when selecting your own personal design.

Two-Letter Monogram—Cipher
A cipher is a decorative two-letter monogram that can be used to combine a first and last name (dropping the middle or maiden initial) or two different last names when the partners both keep their last names.

Two-Letter Monogram—Traditional
A two-letter monogram in a traditional format will place both letters side by side and same size. Like the cipher, it can be used to either combine a first and last name or to combine two last names.

Three-Letter Monogram—Traditional
The most popular of monogram designs is a three-letter format where the surname appears center and larger. Traditional etiquette is to use the lady of the house’s initials in the following order: First, Last, Maiden. However, modern tastes have evolved to replace the maiden initial with the husband’s first initial.

Three-Letter Monogram—Straight Across
This three-letter monogram is designed for an individual’s name and is not suited for couples who wish to combine their initials. These styles are commonly used for gentleman, but are also popular for a modern twist throughout the home.

Single Initial
A single initial can represent either the first or last name. Single initials are a nice option for a guest room or for informal table linens.

GO CLASSIC. An ivory hemstitched napkin with gold monogram is the little black dress of tabletop. It gives warmth to the table, and is not as stark as white on white.

CONSIDER COLOR. I encourage the use of colored linens—they’re a game changer on the table and an important decorative element, just like the flowers or candles.

NAPKIN SIZE MATTERS. I mostly use 22-by-22-inch napkins. For a while those oversized “lapkins” were all the rage, but they can make place settings too crowded. It’s easier to work with a traditional size. 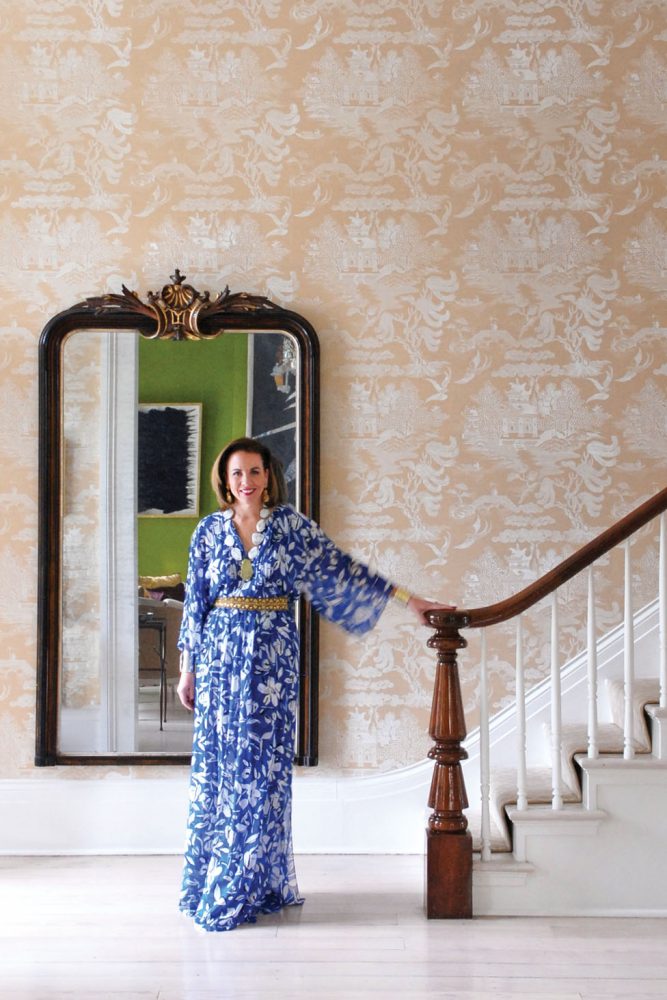 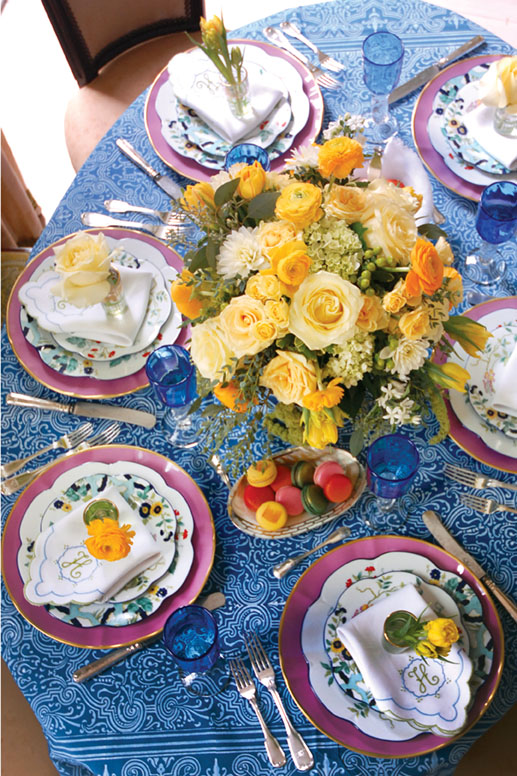 A centerpiece created by Margaret Ludwig of Giverny Design adds a burst of yellow to a blue table cloth Hodges found in Paris.

MAKE YOUR MARK. I founded Leontine Linens on the premise that monogrammed linens should be modern heirlooms—designs that speak to the moment but last forever. For me, that means adding color and scale. Traditionally in the South, monograms have been three letters—the wife’s first name on the left, married last name in the middle, and her maiden name on the right. But today there are so many different scenarios and I believe there are no rules, only what suits your style and family. In an intricate design, a single initial may be enough. 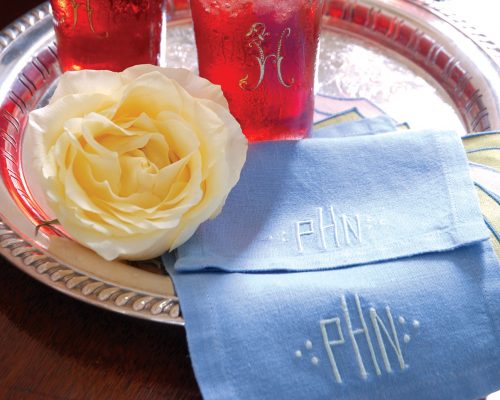 TABLECLOTH OR PLACE MATS? IT’S A QUESTION OF PERSONAL PREFERENCE. For a recent luncheon I pulled out a tablecloth I bought on an anniversary trip to Paris with my husband. I always pick up things on my travels to add to my entertaining “prop closet,” as they add personality and bring back memories. But a lot of times I don’t use a tablecloth at all. I love square 15-by-15 place mats. They frame china nicely and give the same impression as a charger, and I can fit more settings around the table than with the standard rectangle. When the table surface itself is pretty, they really help show it off.

By Jane Scott Hodges, with excerpts from her book, Linens: For Every Room and Occasion (Rizzoli New York, 2014) | Photography by Kerry McCaffety | All monogram designs and linens from Leontine Linens 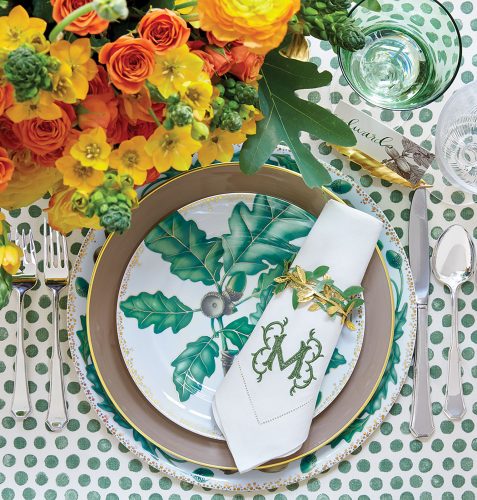 Previous post Laura Dowling's Top 7 Things to Do in Paris