In a 19th-century lemon house surrounded by gardens in Florence, Italy, calligrapher Betty Soldi found the perfect spot to explore her craft 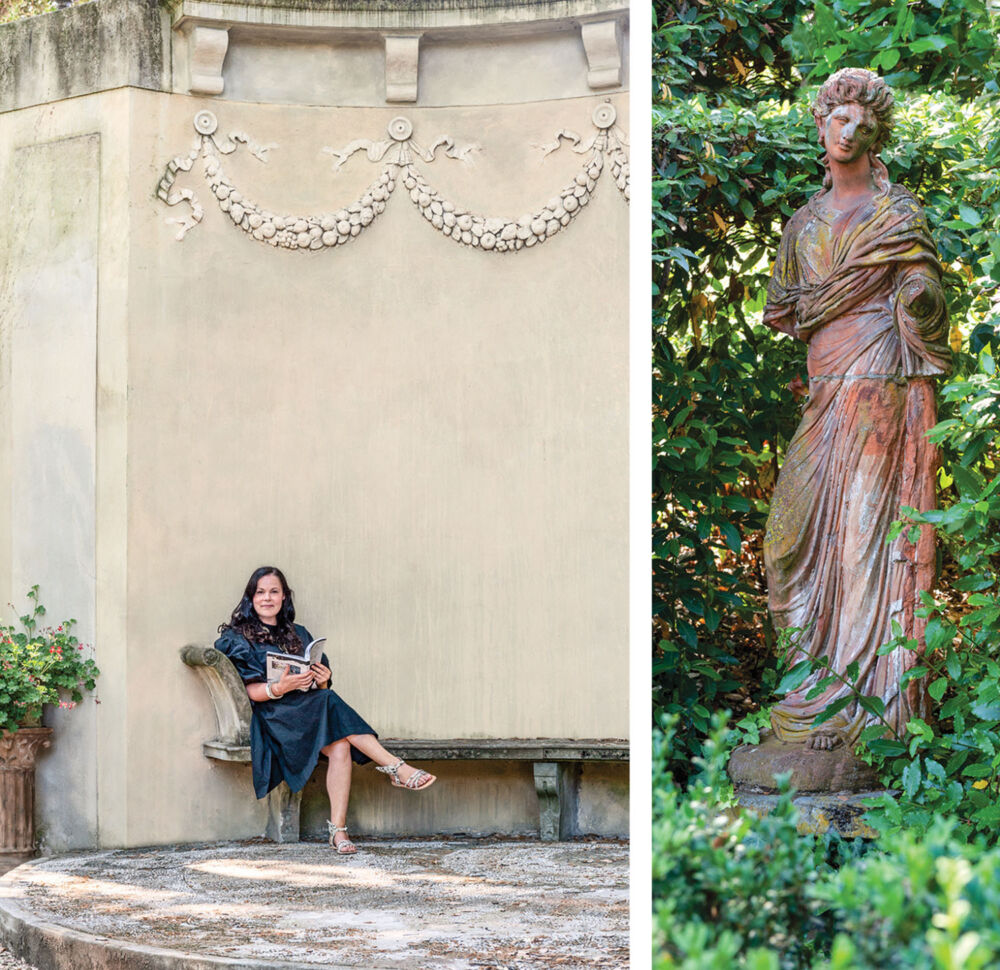 From left: Betty, author of Inkspired (translated into eight languages), sits on a sandstone bench leaning against a wall decorated with classical flourishes. • Scattered throughout the Corsi garden in Florence are the terra-cotta draped Muses, gentle-eyed protectors of the arts and the true guardians of this magical place.

Calligrapher Betty Soldi, whose clients include Fortnum & Mason, Hermès, and Stella McCartney, found her way to her craft during a gap year in Florence. After pursuing a more academic path, she decided to explore her creative side by taking a design course. “When instructed to draw a flower using any medium, I doubted my ability to draw. Instead, I inkily wrote ‘Fiore’ in the shape of a flower,” says Betty. “ ‘Bravissima!’ I was told—and my destiny was set.” 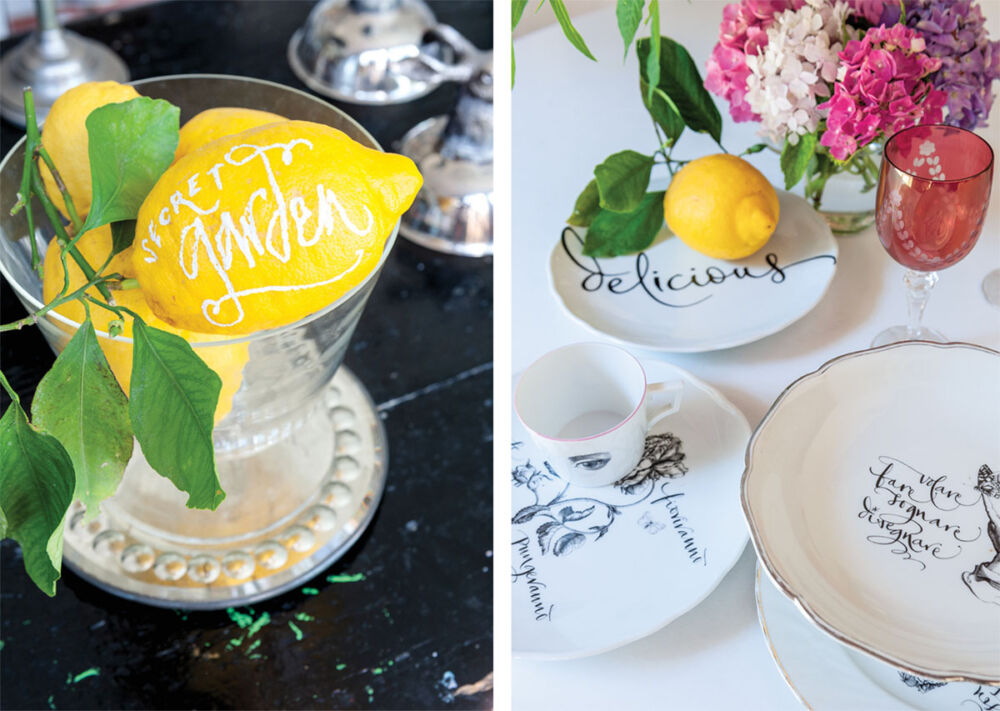 From an early age, Betty was around people who celebrated the idea of creating with their hands. Her family has been hand-making fireworks since 1869. “I grew up surrounded by gunpowder, sulphur, silver dust, kraft paper, and string—creative hands that touched, tore, creased, and crammed, giving life to explosions and adding more stars to the sky,” she says. She also had an aha moment at age 7 when her family moved from Florence to London. She didn’t understand any English but remembers being captivated by the teacher writing the alphabet on the blackboard— “seeing chalky letterforms magically appear, each with their own shape and meaning, look and feel,” she recalls. 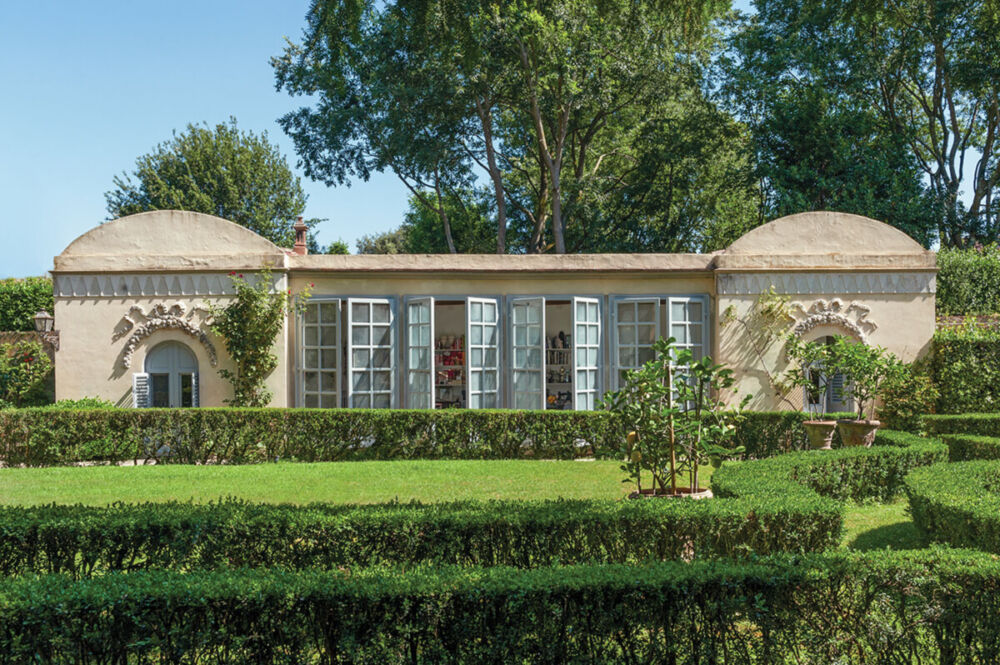 Betty Soldi’s design studio, housed in a limonaia in the 1801 Corsi garden, integrates a stretch of walls from the 1400s by Cosimo I de’ Medici.

After her gap year in Italy, Betty went back to England to study art and visual communication. There she discovered the world of calligraphy through a program based on the principles of the Bauhaus architectural style, which focuses on simplicity and function, although Betty’s style is fanciful and free. “You need to know the rules in order to break them—stripping away decoration to leave clean lines of function,” she says. “My Renaissance soul loves it all, the old and the new.” 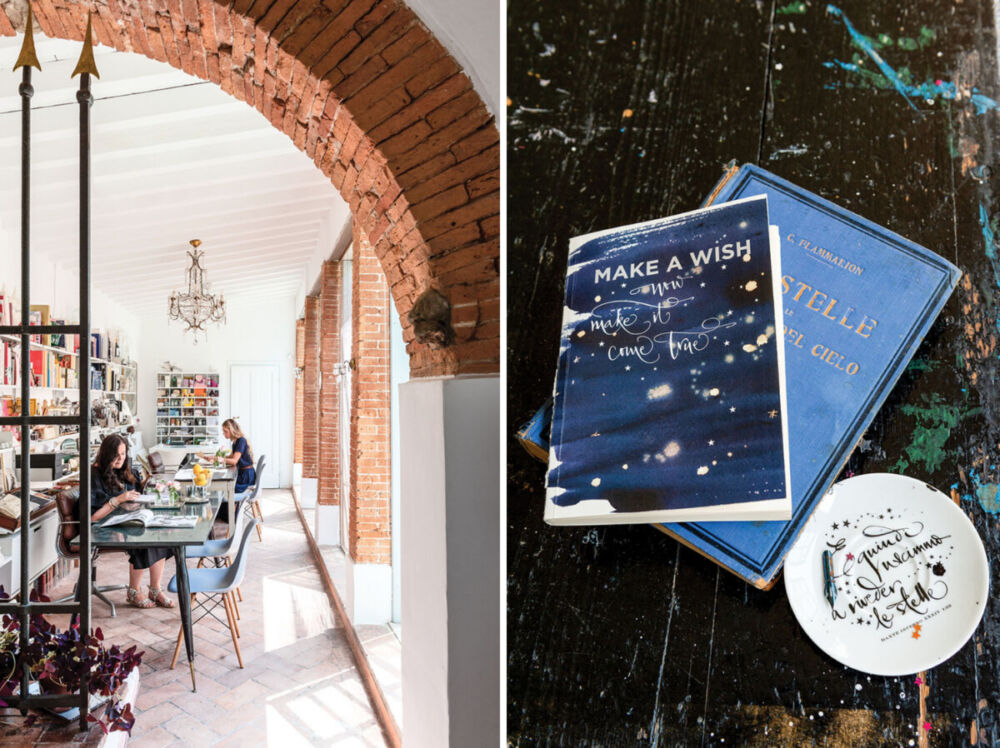 From left: Inside the lofty studio with views of the garden. • Betty is a collector of words, always on the hunt.

In Betty’s philosophy, ink and pen, white spaces, and handwritten characters open up to a world of surprising depth. Spoken and unspoken words, words that can be shouted and whispered, stories, imagination, and creativity that gives voice to the unconscious—handwriting contains these and much more. “Handwriting brings you closer to people,” says Betty. “It leads you to read, and it conveys emotions that are difficult to express.” 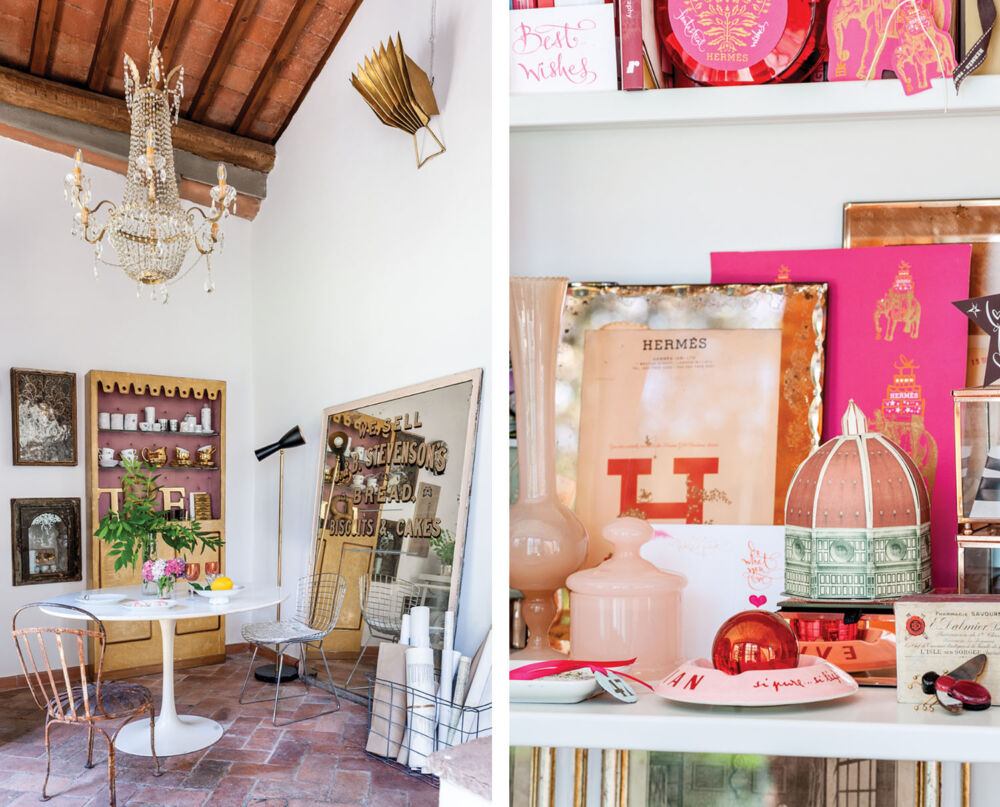 From left: This eclectic corner includes a vintage Italian chandelier, a mirror from Retrouvius in London, and a Saarinen table. • “Collecting things is collecting ideas past, present, and future,” says Betty.

After 10 years spent as a graphic designer responsible for the special projects of Fortnum & Mason and also working in packaging and graphics for other fashion and luxury brands, Betty returned to Florence. After a while, fate rewarded her with an exceptional place to house her studio, a 19th-century lemon house—a  small pavilion where lemon trees were once sheltered during the cold months. The house is located inside the Corsi garden, the first English garden in the city. Raised above the road, between the Boboli and Torrigiani Gardens, it is a secret corner of Florence, open only once a year to the public. “I knew it because of these visits, and the idea of being able to have my personal space here seemed like a very difficult dream to achieve,” says Betty. “But the universe listened to me, and it actually became my atelier.”

“One believes that control is important in my discipline, while the secret, from my point of view, lies precisely in the ‘letting go’ credo.” — Betty Soldi

From left: Betty organizes her collections in a chromatic sequence for visual memory. • “I like to cultivate spontaneity,” she says. “When I write I’m fast. I let myself be guided by inspiration.”

Romantic, poetic, and sprinkled with statues dedicated to the arts, this green space echoes the typical themes of the Grand Tour, the journey that young English aristocrats of the 17th and 18th centuries would make to Italy to study classical artworks—a custom that resulted in many artists, critics, and writers settling in Florence. For Betty, a modern-day Florentine artist with London roots, the fusion of Italian and English culture at the Corsi garden makes it a fitting place to call home.

This story originally appeared in Flower magazine’s March/April 2021 issue. Find Flower in a store near you or subscribe.