A Photo in Time

Paulette Tavormina uses flowers, fruit, and other objects to create photographs that are as evocative and beautiful as the 17th-century Dutch paintings that inspire them 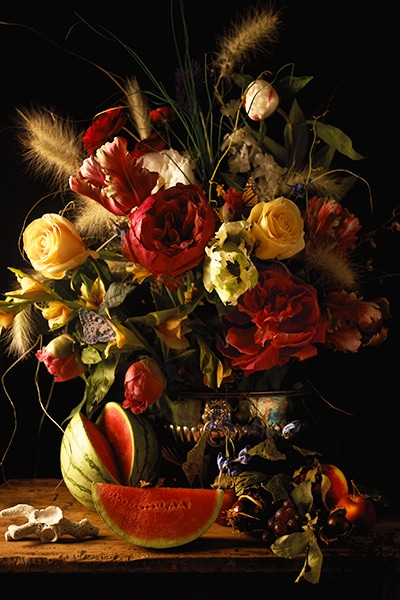 Peer into one of the sensuous photographs by Paulette Tavormina and you almost could be stepping back in time—indeed, into a 17th-century Dutch flower painting. Tavormina’s work captures the essence of the Old Masters, and just as their paintings did centuries ago, her images go deeper than the literal and speak to universal themes that are just as relevant today: the fragility of life and love, fleeting beauty, and a particular moment.

Dutch still-life painters often inserted a skull or decaying fruit in their paintings to symbolize mortality—sometimes not-so-subtle reminders that nothing lasts forever. The genre became known as Natura Morta, or “dead nature.” Tavormina uses symbolism to take her viewers beyond the beauty of the subject and to tell a story of shared human emotions.

Peonies, 2009. “I grew up surrounded by peonies. Mother loved old-fashioned flowers,” says Tavormina. “When I’m shooting, I often feel like I am going back to my mother’s garden.”

Peaches and Morning Glories, After G.G., 2010. Paulette Tavormina’s photographs often suggest a cycle of life. A withered blossom, as well as those that appear freshly picked, tucks into luscious fruit also in various stages, including an opened peach and a peach pit on the table.

Flowers and Fish I, GVS, 2012 from the artist’s Flowers, Fish, & Fantasies series

By Katherine Pearson | All photography courtesy of the artist and Robert Klein Gallery, Boston